Ralph Milner (born at Slackstead, Hampshire, England, early in the sixteenth century; executed at Winchester, 7 July 1591) was an English Roman Catholic layman. He is a Catholic martyr, beatified in 1929.

The greater part of his life was probably passed in his native village, where, being practically illiterate, he supported his wife and eight children by manual labour. He was brought up an Anglican, but became a Catholic convert. On the very day of his first Communion, however, he was arrested for changing his religion.

He and his wife had raised eight children in the Protestant faith. Ralph’s neighbors, who were Catholic, inspired him to convert through their goodness and charity, and along with his entire family, he received instruction and was received into the Church. But he was arrested and committed to Winchester jail.

Here his good behaviour meant he was frequently allowed out on parole, and was even trusted with the keys of the prison. This leniency enabled him to introduce priests to administer the sacraments to Catholic prisoners. He then acted as escort first to Father Thomas Stanney, and later to his successor at Winchester, Father Roger Dicconson, conducting them to the different villages to minister to Catholics.

Finally seized with Father Dicconson, Milner was with him placed under close confinement in Winchester jail pending the approaching sessions. The judge urged Milner to attend even once the Protestant church and thus escape the gallows. He refused and began to prepare for death.

Every effort was made to persuade him to change his purpose and renounce the Catholic faith. When he was approaching the gallows with Father Dicconson, his children were led to him in the hope that he might even then relent. He was unshaken in his resolution, and gave his children his last blessing.

Ralph Milner’s paternal agony would have been particularly acute when his judge had the condemned traitor’s eight children paraded before their father to plead with him to compromise. Indeed, it would’ve been an easy compromise to make, since the judge merely asked the old man to make a token visit to a Protestant church in exchange for his freedom.

Yet, Blessed Ralph Milner did not succumb to the temptation of liberating his life, but died saving his faith and integrity. Without hesitation, he quietly and firmly refused the judge’s offer, proclaiming he would rather die for his faith, and refusing “to embrace a counsel so disagreeable to the maxims of the Gospel.”

Despite every effort by the judge and the guards who had come to like him, Ralph was unshaken in his resolution. After giving his children his last blessing, he declared that “he could wish them no greater happiness than to die for the like cause.” Unfortunately, that is exactly what happened. He was executed on July 7, 1591 at Winchester and beatified in 1929 by Pope Pius XI.

Eternal God, you bestowed upon your humble layman, the Blessed Ralph Milner, the courage and conviction of his faith, to desist the repeated attempts of the evil one to deny his faith in order to save his life. He rather lay down his life for his faith in the Living God.

May we, by his example be endowed with courage to proclaim and practice our faith openly. We ask this through Christ our Lord. Amen 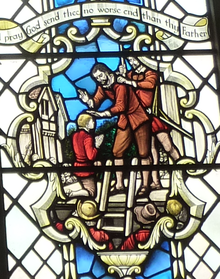 Blessed Ralph Milner, pray for us.