FEAST OF SAINT ALPHONSUS OF LIGOURI, BISHOP AND DOCTOR OF THE CHURCH – 1st AUGUST 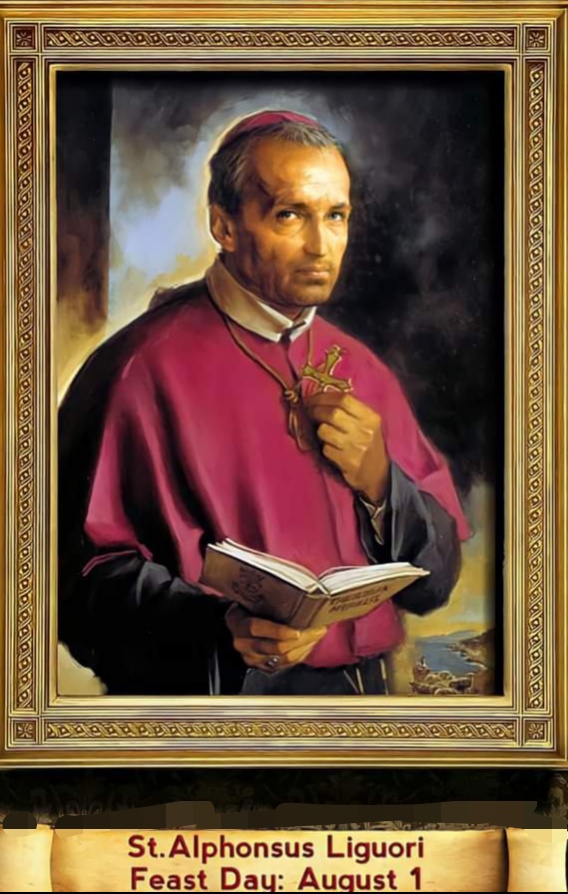 Two days after he was born, he was baptized at the Church of Our Lady the Virgin as Alphonsus Mary Anthony John Cosmas Damian Michael Gaspard de’ Liguori. The family was of noble lineage, but the branch to which Liguori belonged had become somewhat impoverished. He received a broad education in the humanities, classical and modern languages, painting and music.

He composed a Duetto on the Passion, as well as the most popular Christmas carol in Italy, Tu Scendi Dalle Stelle, and numerous other hymns. He finished his university studies earning a Doctorate in both civil and canon law and began his practice in the legal profession. Liguori learned to ride and fence but was never a good shot because of poor eyesight.

Myopia and chronic asthma precluded a military career so his father had him educated for the legal profession. He was taught by tutors before entering the University of Naples, where he graduated with doctorates in civil and canon law at 16. He remarked later that he was so small at the time that he was almost buried in his doctor’s gown and that all the spectators laughed.

When he was 18, like many other nobles, he joined the Confraternity of Our Lady of Mercy, with whom he assisted in the care of the sick at the hospital for “incurables”. He became a successful lawyer. He was thinking of leaving the profession and wrote to someone, “My friend, our profession is too full of difficulties and dangers; we lead an unhappy life and run risk of dying an unhappy death”.

At 27, after having lost an important case, the first he had lost in eight years of practising law, he made a firm resolution to leave the profession of law. Moreover, he heard an interior voice saying: “Leave the world, and give yourself to me.” Alphonsus’ greatest contribution to the Church was in the area of Moral Theological reflection with his Moral Theology. 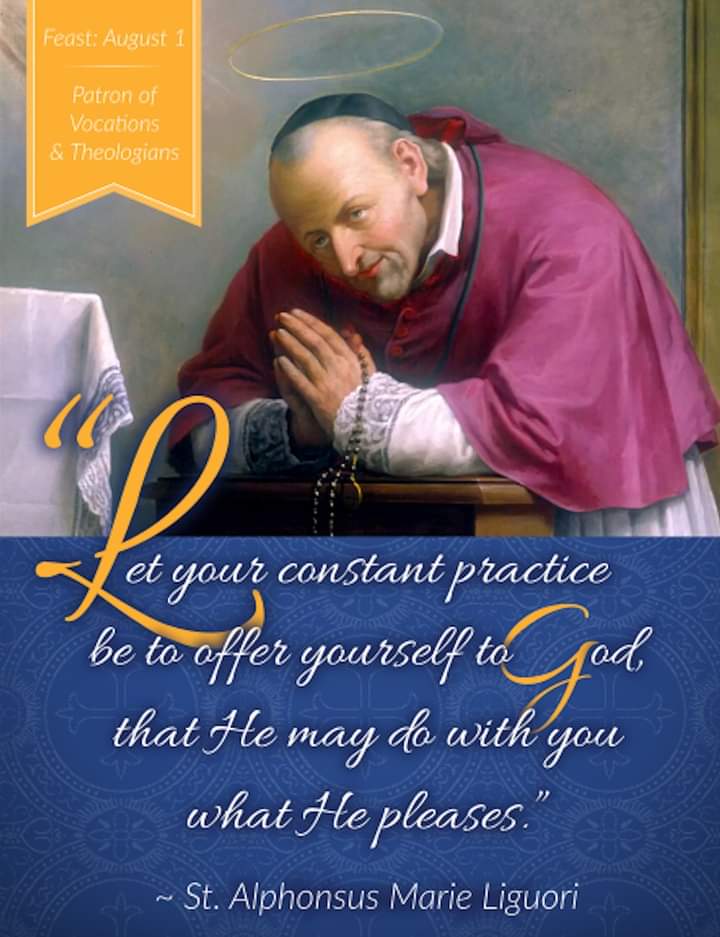 This work was born of Alphonsus’ pastoral experience, his ability to respond to the practical questions posed by the faithful and from his contact with their everyday problems. He opposed the sterile legalism which was suffocating theology and he rejected the strict rigorism of the time… the product of the powerful elite.

According to Alphonsus, those were paths that were closed to the Gospel because “such rigour has never been taught or practised by the Church”. He knew how to put theological reflection at the service of the greatness and dignity of the person, of a moral conscience, and of evangelical mercy.

Alphonsus was consecrated bishop of St. Agatha of the Goths in 1762. He was 66 years old. He tried to refuse the appointment because he felt too old and too sick to properly care for the diocese. In 1775, he was allowed to retire from his office and went to live in the Redemptorist community in Pagani where he died on August 1, 1787.

He was canonized in 1839, proclaimed a Doctor of the Church in 1871 and Patron of Confessors and Moralists in 1950. In 1723, he decided to offer himself as a novice to the Oratory of St. Philip Neri with the intention of becoming a priest. His father opposed the plan, but after two months (and with his Oratorian confessor’s permission), he and his father compromised: he would study for the priesthood, but not as an Oratorian, and would live at home.

He was ordained on 21 December 1726, at the age of 30. He lived his first years as a priest with the homeless and the marginalized youth of Naples. He became very popular because of his plain and simple preaching. He said: “I have never preached a sermon which the poorest old woman in the congregation could not understand”. He founded the Evening Chapels, which were managed by the young people themselves.

The chapels were centres of prayer and piety, preaching, community, social activities and education. At the time of his death, there were 72, with over 10,000 active participants. His sermons were very effective at converting those who had been alienated from their faith.

Liguori suffered from scruples much of his adult life and felt guilty about the most minor issues relating to sin. Moreover, Liguori viewed scruples as a blessing at times and wrote: “Scruples are useful in the beginning of conversion…. they cleanse the soul, and at the same time make it careful”.

In 1729, Liguori left his family home and took up residence in the Chinese Institute in Naples. It was there that he began his missionary experience in the interior regions of the Kingdom of Naples, where he found people who were much poorer and more abandoned than any of the street children in Naples.

In 1731, while he was ministering to earthquake victims in the town of Foggia, Alphonsus said he had a vision of the Virgin Mother in the appearance of a young girl of 13 or 14, wearing a white veil. On 9 November 1732, he founded the Congregation of the Most Holy Redeemer, when Sister Maria Celeste Crostarosa told him that it had been revealed to her that he was the one that God had chosen to found the congregation. 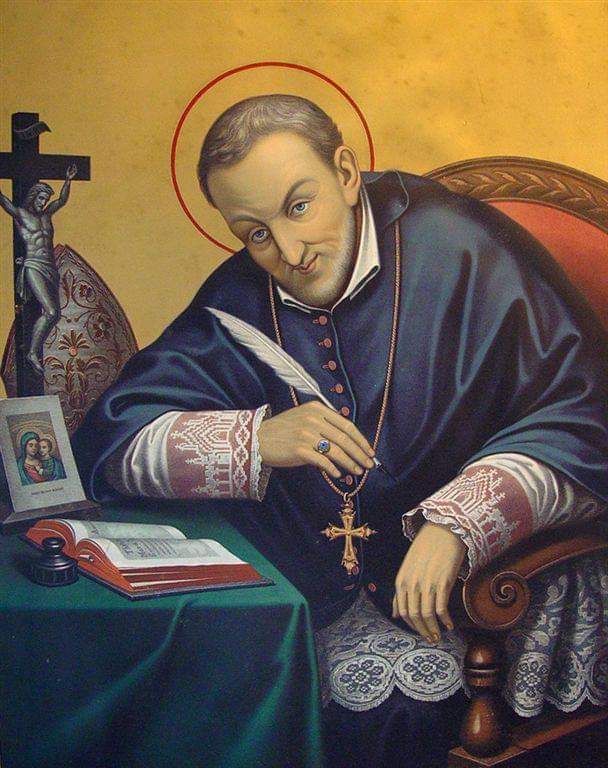 He founded the congregation with the charism of preaching popular missions in the city and the countryside. Its goal was to teach and preach in the slums of cities and other poor places. They also fought Jansenism, a heresy that preached an excessive moral rigorism: “the penitents should be treated as souls to be saved rather than as criminals to be punished”. He is said never to have refused absolution to a penitent.

A gifted musician and composer, he wrote many popular hymns and taught them to the people in parish missions. In 1732, while he was staying at the Convent of the Consolation, one of his order’s houses in the small city of Deliceto in the province of Foggia in Southeastern Italy, Liguori wrote the Italian carol “Tu scendi dalle stelle” (“From Starry Skies Descending”) in the musical style of a pastorale.

The version with Italian lyrics was based on his original song written in Neapolitan, which began Quanno nascette Ninno (“When the child was born”). As it was traditionally associated with the zampogna, or large-format Italian bagpipe, it became known as Canzone d’i zampognari, the “Carol of the Bagpipers”.

Liguori wrote sermons, books, and articles to encourage devotion to the Blessed Sacrament and the Blessed Virgin Mary. He first addressed ecclesiastical abuses in the diocese, reformed the seminary and spiritually rehabilitated the clergy and faithful. He suspended those priests who celebrated Mass in less than 15 minutes and sold his carriage and episcopal ring to give the money to the poor.

In the last years of his life, he suffered a painful sickness and a bitter persecution from his fellow priests, who dismissed him from the Congregation that he had founded. By May 1775, Alphonus was “deaf, blind, and laden with so many infirmities, that he has no longer even the appearance of a man”, and his resignation was accepted by the recently crowned Pope Pius VI.

He continued to live with the Redemptorist community in Pagani, Italy, where he died on 1 August 1787. He was beatified on 15th September 1816 by Pope Pius VII and canonized on 26 May 1839 by Pope Gregory XVI. In 1949, the Redemptorists founded the
Alphonsian Academy for the advanced study of Catholic moral theology. He was named the patron of confessors and moral theologians by Pope Pius XII on 26 April 1950, who subsequently wrote of him in the encyclical Haurietis aquas.

In bestowing the title of “Prince of Moral Theologians”, the church also gave the “unprecedented honour she paid to the Saint in her Decree of 22 July 1831, which allows confessors to follow any of St. Alphonsus’s own opinions without weighing the reasons on which they were based”. The church did not bestow this unique privilege lightly but it was due to the extraordinary combination of exceptional knowledge and understanding of church teachings combined with the great precision in which he wrote.

Lord God, you unceasingly grant living testimonies of your greatness in the lives of the many saints edifying your Church, who have brought glory to your Name by their holiness.

Saint Alphonsus in his zealousness and faithfulness for showing souls the Way and the Truth, sought out souls, and brought them to conversion, by bringing them to you.

May we follow his example, that we may share his reward in heaven. Through our Lord Jesus Christ, your Son, who lives and reigns with you in the unity of the Holy Spirit, God, for ever and ever. Amen 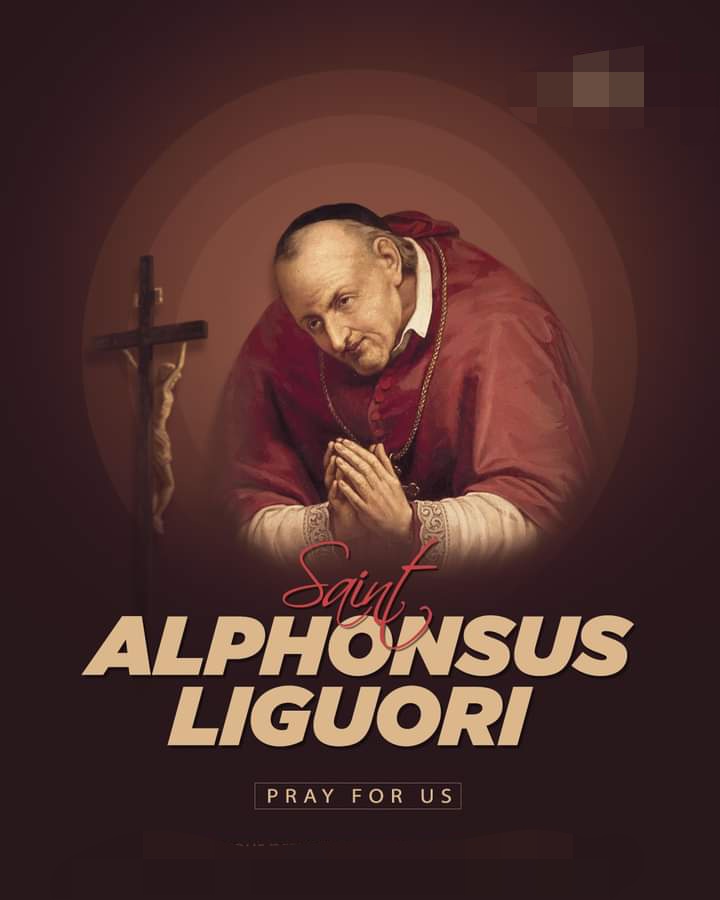