THE FEAST OF THE EPIPHANY – 6th JANUARY 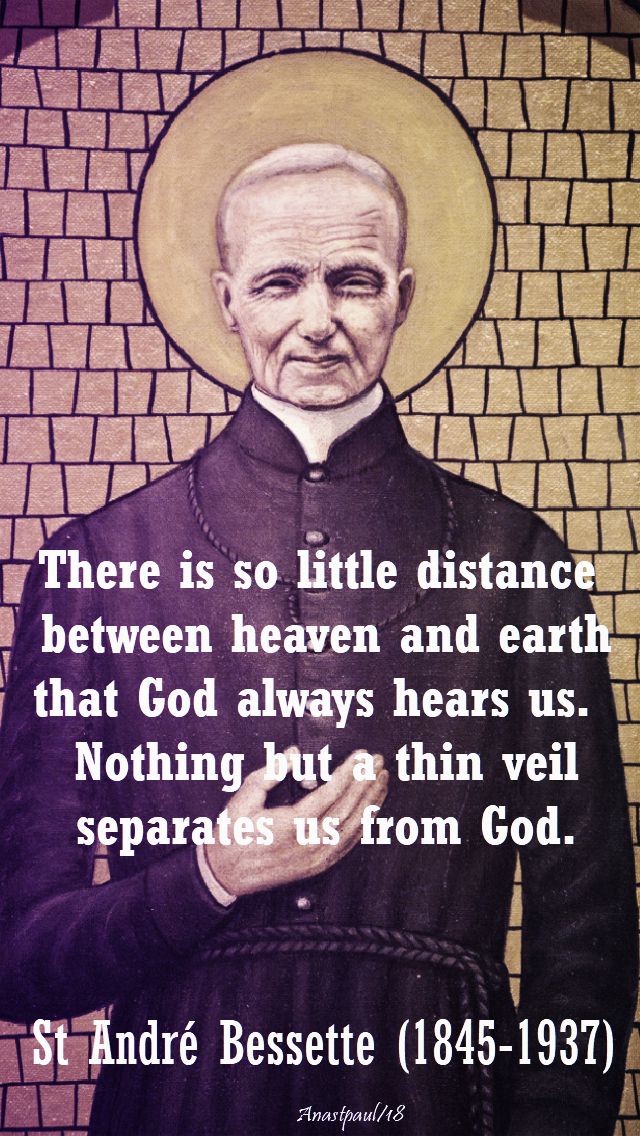 André Bessette, (9 August 1845 – 6 January 1937), more commonly known as Brother André, and since his canonization as Saint André of Montreal, was a lay brother of the Congregation of Holy Cross and a significant figure of the Roman Catholic Church among French-Canadians, credited with thousands of reported miraculous oil healings associated with his pious devotion to Saint Joseph. Bessette was declared venerable in 1978 and was beatified by Pope John Paul II in 1982. Pope Benedict XVI approved the decree of sainthood for Blessed André on 19 February 2010, with the formal canonization taking place on 17 October 2010. He is the first Canadian living after Confederation to be canonized.

He was born Alfred Bessette in Mont-Saint-Grégoire, Canada East. His father, Isaac Bessette, was a carpenter and lumberman, while his mother, Clothilde Foisy Bessette, saw to the education of the children. Alfred was the eighth of 12 children, four of whom died in infancy. At birth, Alfred was so frail that the curé baptized him “conditionally” in an emergency ritual the following day. In 1849, living in poverty, Alfred’s father moved to Farnham, Quebec to work as a lumberman, but soon perished, having been tragically crushed by a falling tree. Alfred was nine years old, and his mother, at 40, remained with ten children in her care. She died of tuberculosis after three years, leaving Alfred orphaned.

According to Laurent Boucher, C.S.C., author of the book Brother André: the Miracle Man of Mount Royal, Alfred was placed under the care of Timothée and Rosalie Nadeau of Saint-Césaire, Quebec following his mother’s death. While with the Nadeau family, Alfred attended catechetical lessons taught by his parish’s pastor, Rev. André Provençal. It was during these lessons that Alfred developed his two lifelong devotions: Saint Joseph and the Passion of Christ. In June 1858, at age 12, Alfred was confirmed by Bishop Jean-Charles Prince of the Diocese of Saint-Hyacinthe. At 14, the Nadeau’s began to send Alfred to school.

However, he was soon removed, having only learned to read and sign his name, both with difficulty. Timothée Nadeau intended to train Alfred as a labourer. Alfred soon left the Nadeau’s and was tajen in by Louis Ouimet, the mayor of Saint-Césaire. While living with the Ouimet family, Alfred had a series of short-lived occupations, working as a farmer, tinsmith, blacksmith, wheelwright, cobbler, and baker, all of which Alfred was too physically weak to sustain. Searching for work, Alfred moved to Moosup, Connecticut at the age of 18, where he joined several of his relatives in work at textile mills across Connecticut and Rhode Island. Bessette returned to Canada in 1867 following the Canadian Confederation.

The pastor of his parish, the Rev. André Provençal, noticed the devotion and generosity of the young man. He decided to present Alfred to the Congregation of Holy Cross in Montreal, writing a note to the superior, “I’m sending you a saint.” Although he was initially rejected by the order because of frail health, Archbishop Ignace Bourget of Montreal intervened on his behalf, and in 1872, Alfred was accepted and entered the novitiate of the congregation, receiving the religious name of Brother André, by which he was known for the rest of his life. He made his final vows on February 2, 1874, at the age of 28.

André was given the task of porter at Collège Notre-Dame in Côte-des-Neiges, Quebec, with additional duties as sacristan, laundry worker and messenger, over the next 40 years. His great confidence in Saint Joseph inspired him to recommend the saint’s devotion to all those who were afflicted. On his many visits to the sick in their homes, he would rub the sick person lightly with oil taken from a lamp burning in the college chapel and recommend them in prayer to Saint Joseph.

People claimed that they had been cured through the prayers of the good Brother and Saint Joseph, and they were grateful their prayers had been heard. Brother André steadfastly refused to take any credit for these cures. His desire to see Saint Joseph honoured led him in 1904 to launch a campaign to build a chapel for that purpose. When an epidemic broke out at a nearby college, André volunteered to nurse. Not one person died. The trickle of sick people to his door became a flood. His superiors were uneasy; diocesan authorities were suspicious; doctors called him a quack. “I do not cure,” he said again and again. “Saint Joseph cures.” In the end he needed four secretaries to handle the 80,000 letters he received each year.

As tensions increased at the college with so many of the sick coming to see the porter, the school officials decided that Brother André could no longer continue with his ministry. He was permitted to receive the sick in the nearby tramway station rather than the college. As his reputation spread, Brother André became quite a controversial figure. There were many religious in the Congregation of Holy Cross, teachers and parents of students at the College who supported him but many others opposed him and even considered him dangerous to the well-being of the school’s reputation because they regarded him as a charlatan. Others were concerned for the good health of the children, fearing the possibility of contagion in the school spread from diseases carried by the sick who frequented Brother André.

In 1924 construction of a basilica named Saint Joseph’s Oratory began on the side of the mountain, near Bessette’s chapel. Bessette died in 1937, at the age of 91. A million people filed past his coffin. The remains of Bessette lie in the church he helped build. His body lies in a tomb built below the Oratory’s Main Chapel, except for his heart, which is preserved in a reliquary in the same Oratory. The heart was stolen in March 1973, but was recovered in December 1974 with the help of famous criminal lawyer Frank Shoofey .

Lord our God, you always befriend the lowly, pious and the humble of heart. It is you who gave your servant, Saint André Bessette, a great devotion to Saint Joseph and a special commitment to aid the poor and afflicted. Help us Lord, through his intercession, to follow his example of prayer and love and so come to share with him in your glory.

Help us revere and honor your appointed ones, through our Lord Jesus Christ, your Son, who lives and reigns with you in the unity of the Holy Spirit, one God, for ever and ever. Amen

Saint André Bessette of Montreal, pray for us.