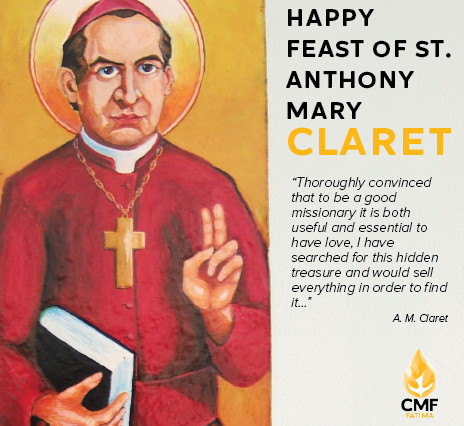 Anthony Mary Claret was a Spanish Roman Catholic Archbishop and missionary, and was confessor of Isabella II of Spain. He was born at Sallent, near Barcelona, on 23rd Dec.1807. Son of a small woolen manufacturer, he received an elementary education in his native village, and at the age of twelve became a weaver.

He went to Barcelona to specialize in his trade and became proficient in Latin, French, and engraving, enlisting in the army as a volunteer. At Barcelona, he entered the seminary at Vich in 1829, and was ordained on 13 June, 1835. He continued to study theology till 1839, wishing to become a Carthusian. But missionary work, appealed strongly to him, so he proceeded to Rome.

In 1848, he was sent to the Canary Islands where he gave retreats for fifteen months. Returning to Vich he established the Congregation of the Missionary Sons of the Immaculate Heart of Mary (16 July, 1849), and founded the great religious library at Barcelona bearing his name, which has issued several million copies of ancient and modern Catholic works.

Pope Pius IX, at the request of the Spanish sovereign, appointed him Archbishop of Santiago de Cuba in 1851. He was consecrated at Vich and embarked at Barcelona on 28 December, immediately working thorough reforms. His zealous work stirred up the enmity and calumnies of the irreligious, as had happened previously in Spain.

No less than fifteen attempts were made on his life. In February, 1857, he was recalled to Spain by Isabella II, who made him her confessor. He worked solely to help the poor and to propagate learning, he lived frugally, taking up his residence in an Italian hospice. For nine years he was rector of the Escorial monastery where he established an excellent scientific laboratory, a museum of natural history, a library, college, and schools of music and languages. His further plans were frustrated by the revolution of 1868.

In 1869 he went to Rome to prepare for the Vatican Council. Owing to failing health he withdrew to Prades in France, where he was still harassed by his calumnious Spanish foes. He retired to the Cistercian abbey at Fontfroide where he expired at Fontfroide, Narbonne, France, on 24 Oct., 1870.

His zealous life testified to his sanctity. Informations were begun in 1887 and he was declared Venerable by Leo XIII in 1899. His relics were transferred to the mission house at Vich in 1897, at which time his heart was found incorrupt. His grave is visited by many pilgrims. Archbishop Claret founded the rules of several communities of nuns, with missions in five continents. He is the patron saint of weavers.

St. Anthony Mary Claret, during your life on earth you often comforted the afflicted and showed tender love and compassion for the sick and sinful.
Intercede for me now, that you rejoice in the reward of your virtues in heavenly glory. Look with pity on me and grant my prayer, if such be the will of God.

Make my troubles your own. Speak a word for me to the Immaculate Heart of Mary, to obtain by her powerful intercession, the grace I yearn for, so ardently. Obtain a blessing to strengthen me during life, and to assist me at the hour of death, and lead me to a happy eternity. Amen.