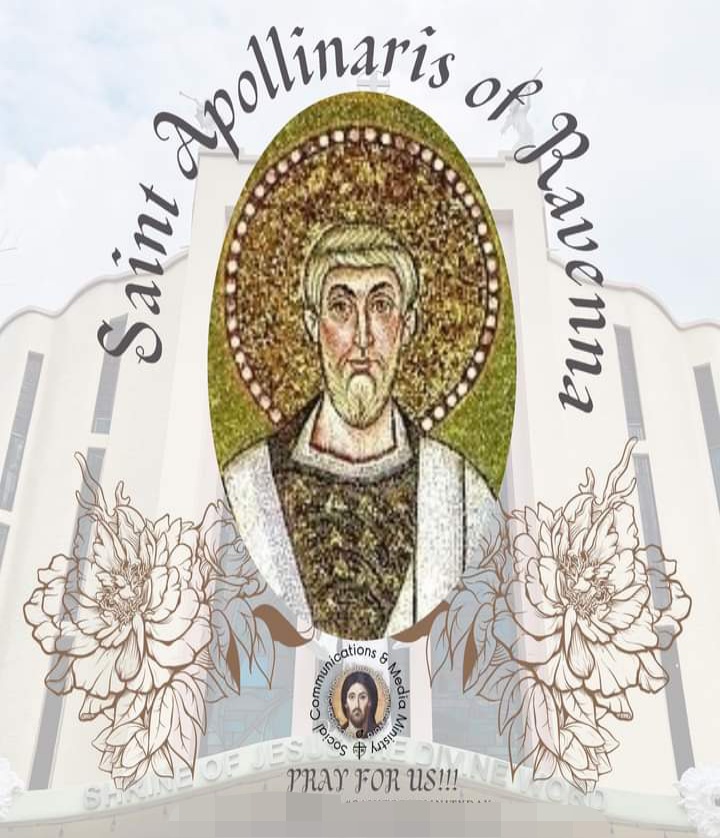 Early accounts report that Saint Apollinaris was ordained Bishop by Saint Peter himself and sent as a missionary bishop to Ravenna during the reign of the emperor Claudius. Renowned for his powers to heal in the name of Christ, he was frequently exiled, tortured and imprisoned for the faith, and finally martyred.

Initially, his feast day was celebrated on July 23, the day he died as a martyr, but it was transferred to July 20 to not “compete” with St. Bridget of Sweden. In the reform of the liturgical calendar of 1969, his feast day was removed due to lack of historical data, but in 2002, it was returned as an Optional Memorial on July 20. His own hometown, Port of Classe, Ravenna, Italy, still celebrates Apollinaris on July 23.

It is also the commemoration of St. Margaret of Antioch, probably a virgin martyr of the third century. Her veneration spread from the East to the West at the time of the Crusades. She is one of the Fourteen Holy Helpers. Elias or Elijah the Prophet is commemorated today in the Roman Martyrology. He is revered as the spiritual Father and traditional founder of the Catholic religious Order of Carmelites.

In addition to taking their name from Mount Carmel where the first hermits of the order established themselves, the Calced Carmelite and Discalced Carmelite traditions pertaining to Elijah focus upon the prophet’s withdrawal from public life. The medieval Carmelite Book of the First Monks offers some insight into the heart of the Order’s contemplative vocation and reverence for the prophet.

Apollinaris came to Rome from Antioch with the prince of the apostles, by whom he was consecrated bishop, and sent to Ravenna to preach the Gospel of our Lord Jesus Christ. He converted many to the faith of Christ, for which reason he was seized by the priests of the idols and severely beaten.

At his prayer, a nobleman named Boniface, who had long been dumb, recovered the power of speech, and his daughter was delivered from an unclean spirit; on this account a fresh sedition was raised against Apollinaris. He was beaten with rods, and made to walk barefoot over burning coals; but as the fire did him no injury, he was driven from the city.

He lay hidden sometime in the house of certain Christians, and then went to Aemilia. Here he raised from the dead the daughter of Rufinus, a patrician, whose whole family thereupon believed in Jesus Christ. The prefect was greatly angered by this conversion, and sending for Apollinaris he sternly commanded him to give over propagating the faith of Christ in the city.

But as Apollinaris paid no attention to his commands, he was tortured on the rack, boiling water was poured upon his wounds, and his mouth was bruised and broken with a stone; finally, he was loaded with irons, and shut up in prison. Four days afterward he was put on board ship and sent into exile; but the boat was wrecked, and Apollinaris arrived in Mysia, whence he passed to the banks of the Danube and into Thrace.

In the temple of Serapis the demon refused to utter his oracles so long as the disciple of the apostle Peter remained there. A search was made for some time, and then Apollinaris was discovered and commanded to depart by sea. Thus he returned to Ravenna; but on the accusation of the same priests of the idols, he was placed in the custody of a centurion.

As this man, however, worshipped Christ in secret, Apollinaris was allowed to escape by night. When this became known, he was pursued and overtaken by the guards, who loaded him with blows and left him, as they thought, dead. He was carried away by the Christians, and seven days after, while exhorting them to constancy in the faith, he passed away from this life, to be crowned with the glory of martyrdom. His body was buried near the city walls. He is the Patron of Ravenna, Italy.

Show favor, O Lord, to your servants and mercifully increase the gifts of your grace, that, made fervent in hope, faith and charity, they may be ever watchful in keeping your commands. Through our Lord Jesus Christ, your Son, who lives and reigns with you in the unity of the Holy Spirit, God, for ever and ever. 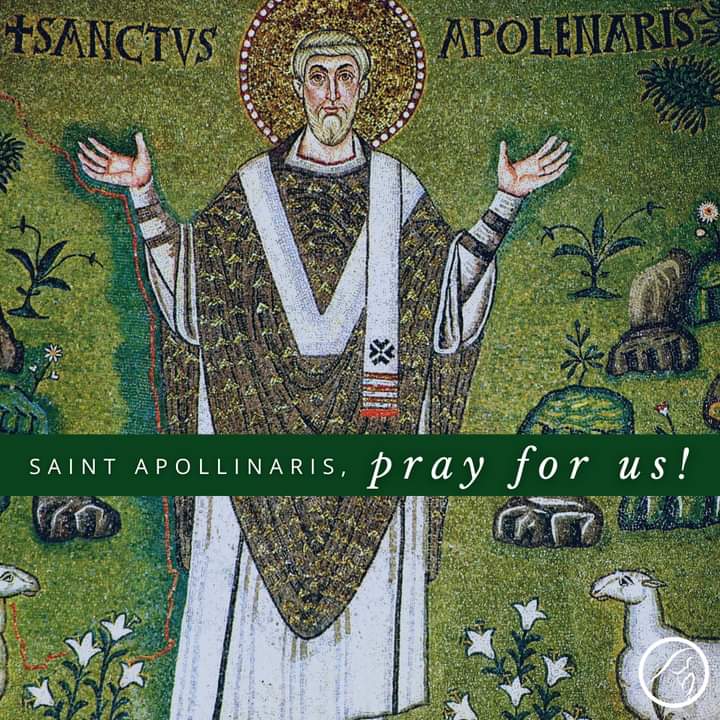 Saint Apollinaris, pray for us.