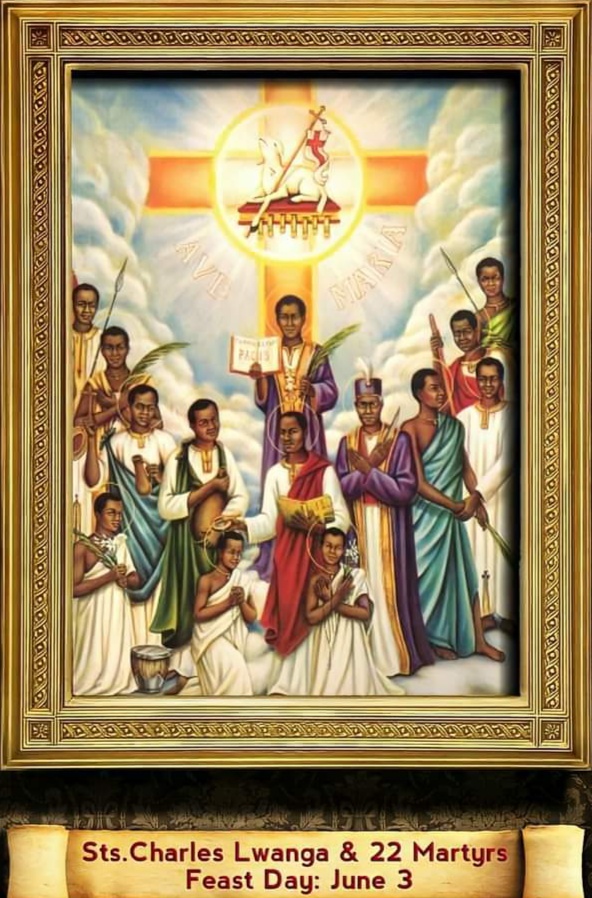 Charles was one of twenty-two Ugandan martyrs who converted from paganism. He was baptized November 1885, a year before his death, and became a moral leader. He was the chief of the royal pages and was considered the strongest athlete of the court. He was also known as “the most handsome man of the Kingdom of the Uganda.”

He instructed his friends in the Catholic Faith and he personally baptized boy pages. He inspired and encouraged his companions to remain chaste and faithful. He protected his companions, ages 13-30, from the immoral acts and homosexual demands of the Babandan ruler, Mwanga. 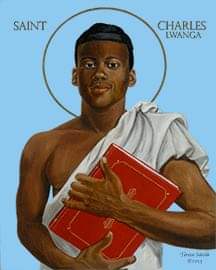 Mwanga was a superstitious pagan king who originally was tolerant of Catholicism. However, his chief assistant, Katikiro, slowly convinced him that Christians were a threat to his rule. The premise was if these Christians would not bow to him, nor make sacrifices to their pagan god, nor pillage, massacre, nor make war, what would happen if his whole kingdom converted to Catholicism?

Charles and his companions were martyred between November 15, 1885 – January 27, 1887. When Charles was sentenced to death, he seemed very peaceful, one might even say, cheerful. He was to be executed by being burned to death. While the pyre was being prepared, he asked to be untied so that he could arrange the sticks. He then lay down upon them.

When the executioner said that Charles would be burned slowly to death, Charles replied by saying that he was very glad to be dying for the True Faith. He made no cry of pain but just twisted and moaned, “Kotanda! (O my God!).” He was burned to death by Mwanga’s order on June 3, 1886.

The persecution started in 1885 after Mwanga, a ritual pedophile, ordered a massacre of Anglican missionaries, including Bishop James Hannington who was the leader of the Anglican community. Joseph Mukasa, the Catholic major-domo of the court and a lay catechist, reproached the king for the killings, against which he had counseled him. 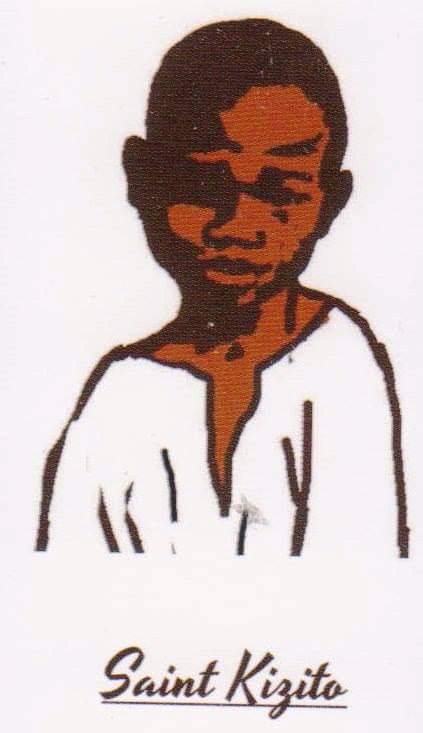 Mwanga had Balikuddembe beheaded and arrested all of his followers on 15 November 1885. The king then ordered that Lwanga, who was chief page at that time, take up Balikuddembe’s duties. That same day, Lwanga and other pages under his protection sought baptism as Catholics by a missionary priest of the White Fathers, some hundred catechumens were baptized. Lwanga often protected boys in his charge from the king’s sexual advances.

On 25 May 1886, Mwanga ordered a general assembly of the court while they were settled at Munyonyo, where he condemned two of the pages to death. The following morning, Lwanga secretly baptized those of his charges who were still only catechumens. Later that day, the king called a court assembly in which he interrogated all present to see if any would renounce Christianity.

Led by Lwanga, the royal pages declared their fidelity to their religion, upon which the king condemned them to death, directing that they be marched to the traditional place of execution. Three of the prisoners, Pontian Ngondwe, Athanasius Bazzekuketta, and Gonzaga Gonza, were murdered on the march there.

When preparations were completed and the day had come for the execution on 3 June 1886, Lwanga was separated from the others by the Guardian of the Sacred Flame for private execution, in keeping with custom. As he was being burnt, Lwanga said to the Guardian, “It is as if you are pouring water on me. Please repent and become a Christian like me.” 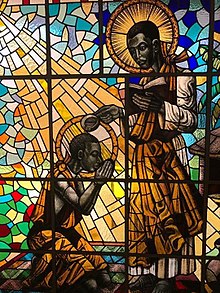 Twelve Catholic boys and men and nine Anglicans were then burnt alive. Another Catholic, Mbaga Tuzinde, was clubbed to death for refusing to renounce Christianity, and his body was thrown into the furnace to be burned along with those of Lwanga and the others. The ire of the king was particularly inflamed against the Christians because they refused to participate in sexual acts with him.

Lwanga, in particular, had protected the pages. The executions were also motivated by Mwanga’s broader efforts to avoid foreign threats to his power. According to Assa Okoth, Mwanga’s overriding preoccupation was for the “integrity of his kingdom”, and perceived that men such as Lwanga were working with foreigners in “poisoning the very roots of his kingdom”. Not to have taken any action could have led to suggestions that he was a weak sovereign.

Pope Paul VI canonized Charles Lwanga and his companions on June 22,1964. We celebrate his memorial on June 3rd on the Roman Calendar. Charles is the Patron of the African Youth of Catholic Action. 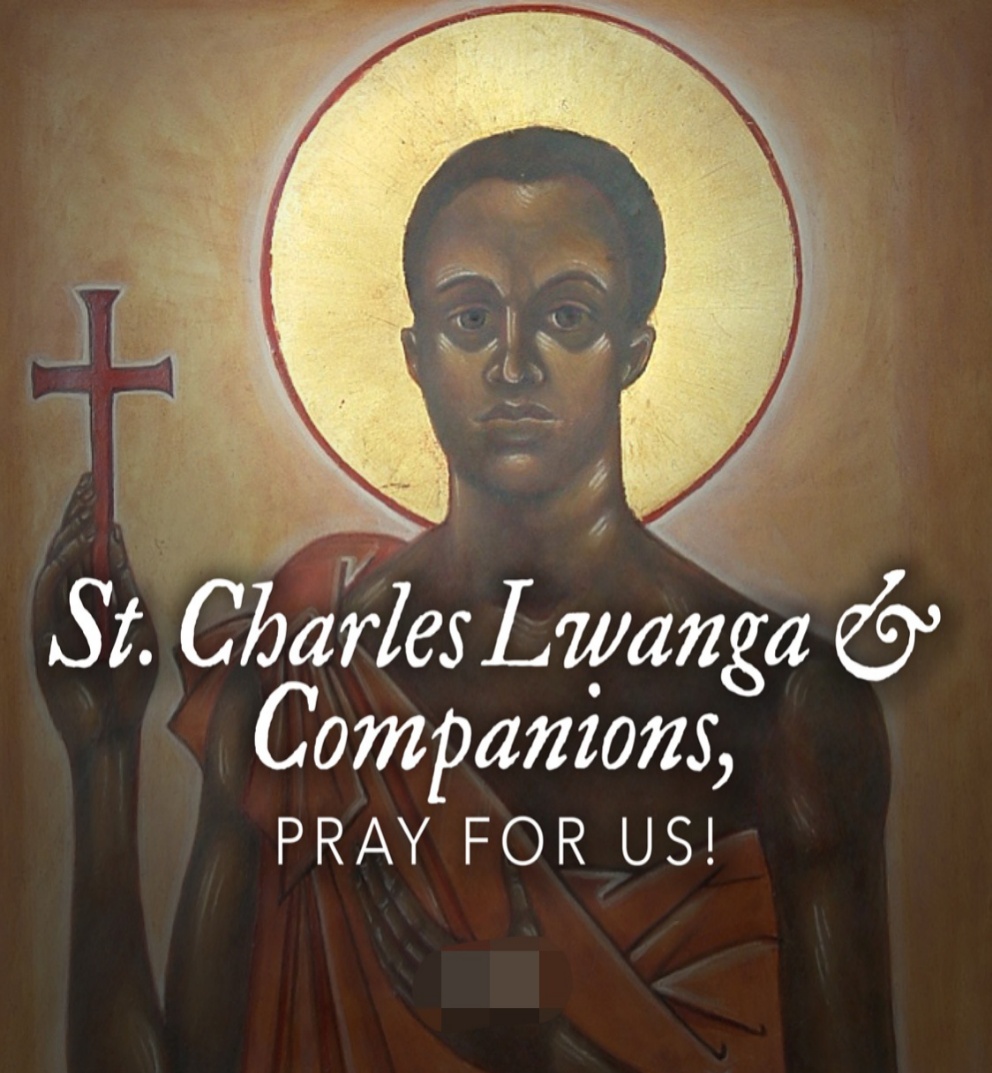 O God, who have made the blood of Martyrs the seed of Christians, mercifully grant that the field which is your Church, watered by the blood shed by Saint Charles Lwanga and his companions, may be fertile and always yield you an abundant harvest. 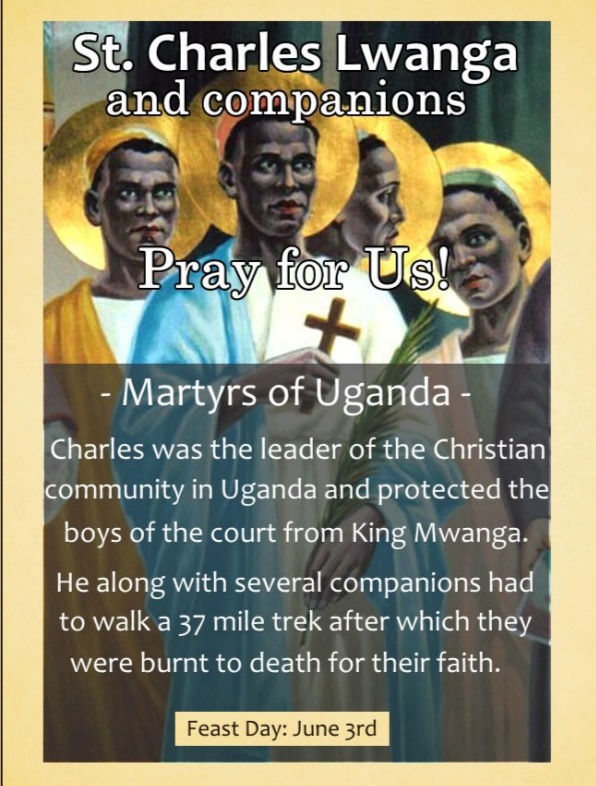