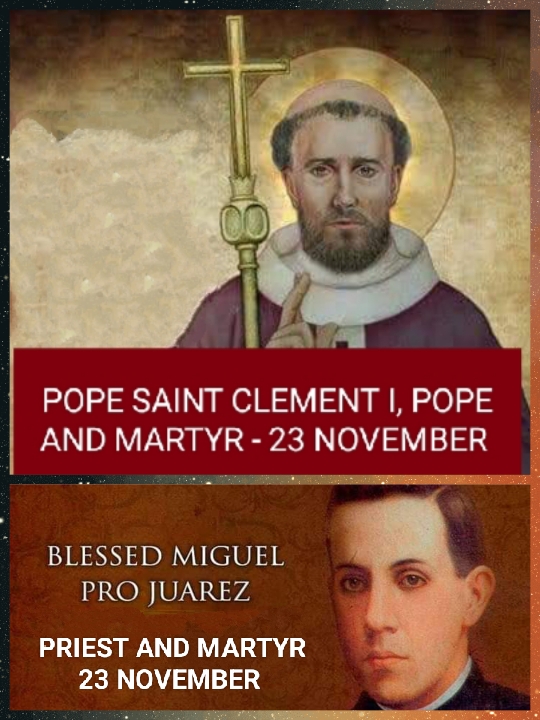 SAINT CLEMENT I, POPE AND MARTYR 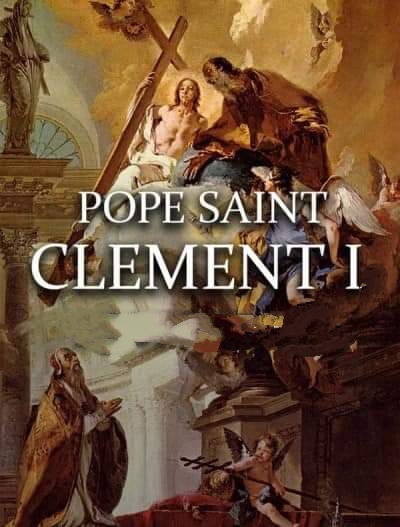 Today’s Memorial commemorates the third successor of Saint Peter, who served as the Bishop of Rome in the last years of the first century. Pope Clement I and his two predecessors are named in Eucharistic Prayer I just after the list of the Twelve Apostles: “Linus, Cletus, Clement…”

Though few details of Clement’s life are known, what is known is surpassingly important. Clement is the very first Apostolic Father and may have been ordained by Saint Peter himself. In about the year 96 A.D., Clement wrote from Rome to the Church in Corinth to resolve some undefined disputes over authority tearing at that congregation.

Clement’s letter is one of the most ancient Christian documents after the New Testament itself. It was so significant that in the second century it was read at Mass in Corinth and, in other regions, was considered part of the New Testament Canon! The tone of Clement’s long letter is fraternal rather than domineering, more like an encyclical than a decree.

Pope Clement encourages the faithful to be obedient to their priests and bishops, to be inspired by the example of the martyrs, and to lead lives of high moral virtue. The Church of Corinth could have looked to Saint John the Evangelist for guidance. In the late first century, he was an old man living in Ephesus, a city much closer to Corinth than Rome. But it was the long-dead Peter whose shadow towered over Corinth, not the living John.

Clement’s letter reveals an even-tempered soul, a shepherd eager to preserve the tenuous unity of his flock. The letter is invaluable as a proof of the centrality of the Bishop of Rome from the first chapter of the Christian story. The service of apostolic authority, of an interior organizing principle, is intrinsic to the Gospel itself, not a later addition.

The primitive papal primacy exercised by Clement is not the imposition of a foreign power structure on an otherwise dreamy and innocent Church. The proto-Christians of Corinth needed clear, fatherly, instruction as they struggled to implement the Christian revolution in their homes, villages, shops, and town squares. Saint Paul had to write to them twice using strong language. It was evidently not enough, hence Clement’s letter a few decades later.

As the first generations of Christians realized that Christ was not going to return before they died, their understanding of the Church matured. Personal prophecies, individual teachings, and private spiritual gifts had to be incorporated into the broader life of the quickly expanding church.

These personal gifts thus became subject to Church approval and to conformity with Scripture and previous teachings. In Clement’s time, the Church, rather than individuals, slowly became the repository of the accumulated wisdom of Christianity.

And this early Church was not merely a society of learned men, an association of the perfect, or a cultural enrichment club. It was, and still is, a real Church, and so did what a real church does. The Corinthians, with Clement’s help, knew this essential fact—that to be a Christian and to be a member of the Church was one and the same thing.

Saint Clement, you always adopted the authority of a patriarch, to address faithful men and women who persevered to preserve Christian unity.

May your strength, powerful and spiritual insights, be the edification of all in Holy Orders to collect and come together, to encourage, and to display tolerance as they teach, preach, and govern in the name of Christ. Amen 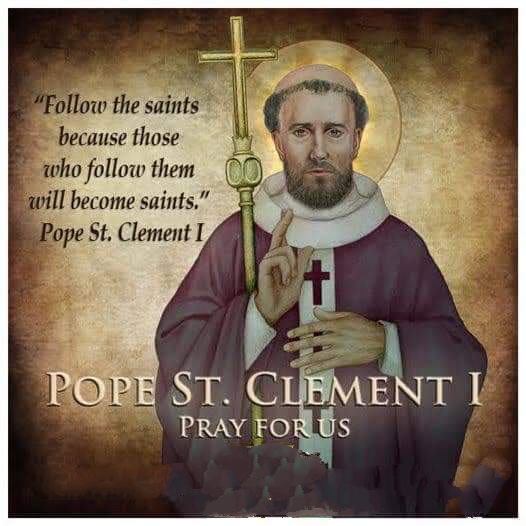 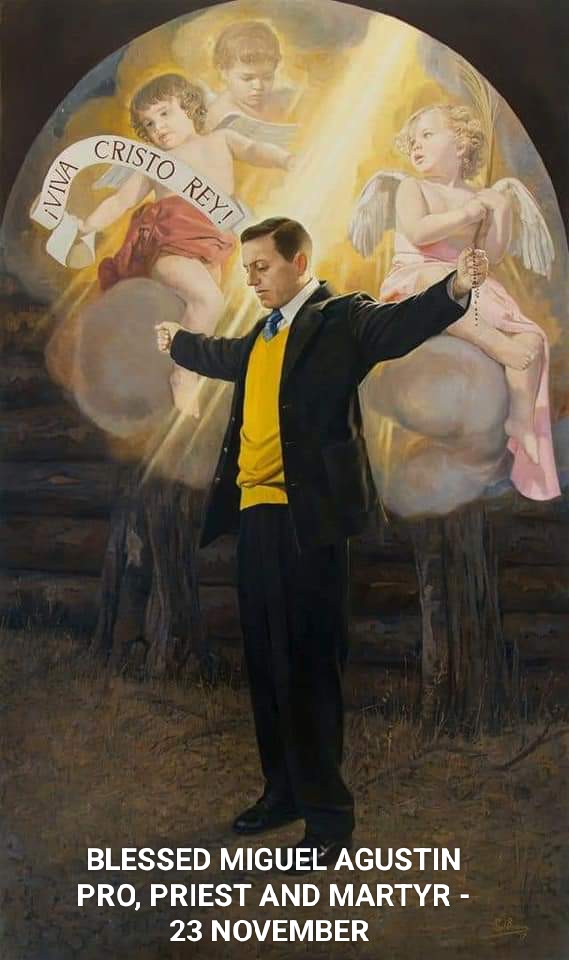 Miguel was born on January 13, 1891 in Guadalupe, Mexico, and was the eldest son of Miguel Pro and Josefa Juarez. He was, from an early age, intensely spiritual and equally intense in playful mischief, repeatedly infuriating his family with his humor and his practical jokes.

As a child, he had a fearless precociouness that sometimes led to near-death accidents and illnesses. Regaining consciousness after one of these episodes, young Miguel opened his eyes and asked his worried parents for his favorite sweet bread, Cocol. He would adopt the nickname as a code name during his clandestine ministry.

Miguel shared an extremely close bond with his older sister and after she entered a cloistered convent, he came to recognize his own vocation to the priesthood. Although he was popular with the senoritas and had prospects of a lucrative career managing his father’s thriving business concerns, Miguel renounced everything for Christ his King and entered the Jesuit novitiate in El Llano, Michoacan in 1911.

Miguel studied in Mexico until 1914, when a huge wave of anti-Catholicism crashed down upon Mexico, forcing him to disband and escape to the United States, where he and his brother seminarians trudged through Texas and New Mexico before arriving at the Jesuit house in Los Gatos, California. He was ordained in Belgium in 1925.

Father Pro immediately returned to Mexico, where he served a Church forced to go “underground.” He celebrated the Eucharist clandestinely and ministered the other sacraments to small groups of Catholics. He and his brother Roberto were arrested on trumped-up charges of attempting to assassinate Mexico’s president. Roberto was spared, but Miguel was sentenced to face a firing squad on November 23, 1927. His funeral became a public demonstration of faith. Miguel Pro was beatified in 1988.

Long live Christ the King!—were the last words Pro uttered before he was executed for being a Catholic priest and serving his flock. When Fr. Miguel Pro was executed in 1927, no one could have predicted that 52 years later the bishop of Rome would visit Mexico, be welcomed by its president, and celebrate open-air Masses before thousands of people.

Pope John Paul II made additional trips to Mexico in 1990, 1993, 1999, and 2002. Those who outlawed the Catholic Church in Mexico did not count on the deeply rooted faith of its people, and the willingness of many of them, like Miguel Pro, to die as martyrs. 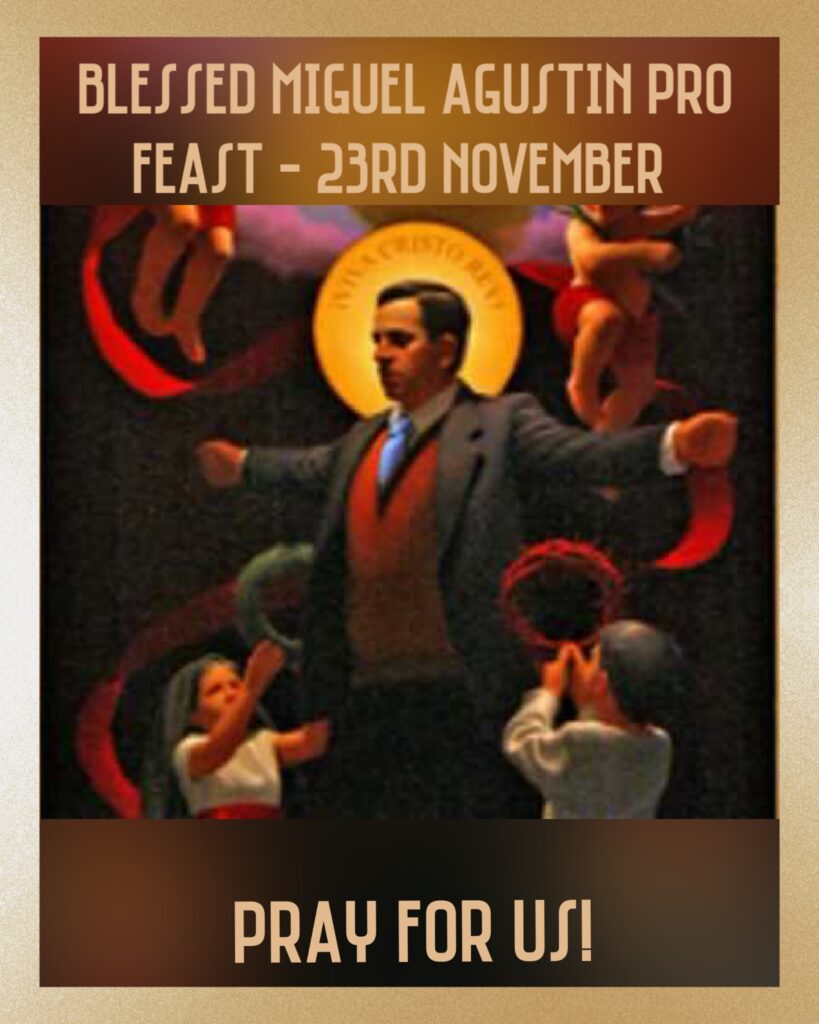 Blessed martyr of Christ the King, Father Miguel Agustin Pro, you are a special patron of those who labor, those in illness, depression, or despair. You are also a friend of musicians, the captives, and all who work toward social justice. Your beloved brothers, the Jesuits, revere you and count you among the ranks of their saints. You love your people of Mexico and all those loyal to the Church.

We thank the Sacred Heart for loving you so dearly. We pray to Our Lady of Guadalupe, whom you love so dearly, to intercede for the cause of your canonization. We pray that you remember us in your eternal and well-deserved rejoicing, Through your courageous life and martyrdom you have won the crown of life everlasting. Remember us, Blessed Miguel, for we remember you. Long live Christ the King! Long live Our Lady of Guadalupe! 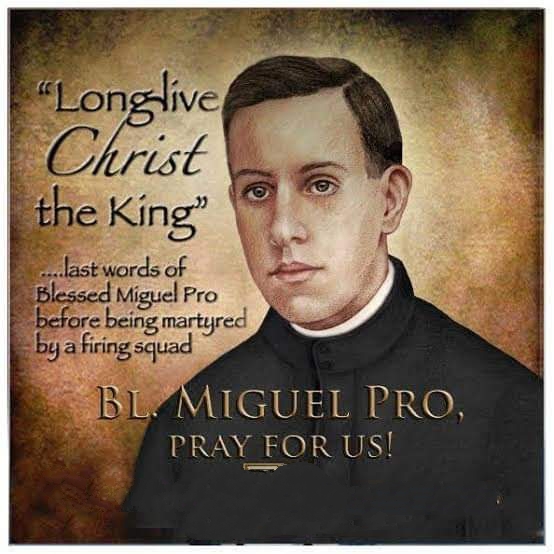