FEAST OF OUR LADY OF PERPETUAL HELP – 27th JUNE

FEAST OF SAINT CYRIL OF ALEXANDRIA, BISHOP AND DOCTOR OF THE CHURCH – 27th JUNE 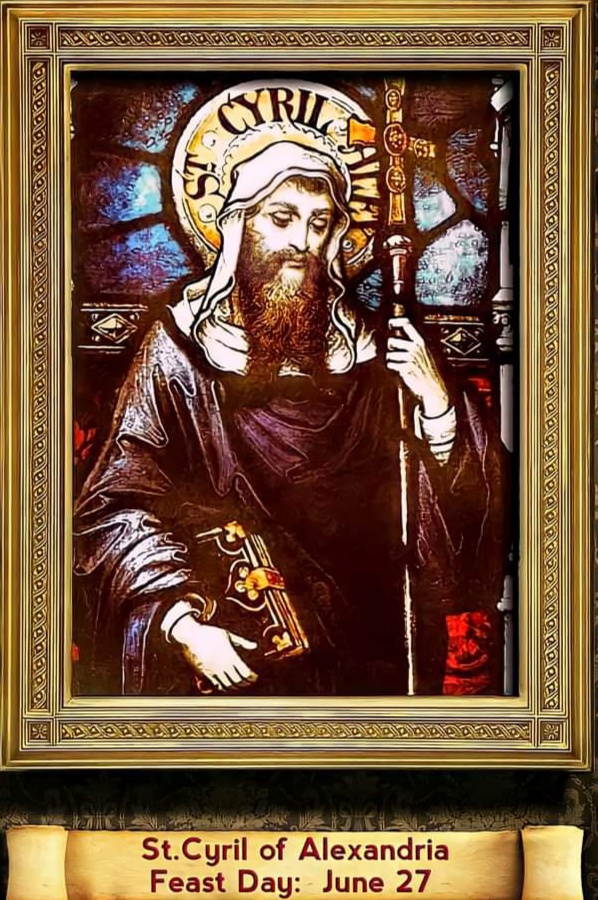 FEAST OF SAINT CYRIL OF ALEXANDRIA, BISHOP AND DOCTOR OF THE CHURCH
FEAST DAY – 27th JUNE

Cyril of Alexandria (370 – 444) was the Patriarch of Alexandria from 412 to 444. He was enthroned when the city was at the height of its influence and power within the Roman Empire. Cyril wrote extensively and was a leading antagonist in the Christological controversies of the late-4th and 5th centuries. He was a central figure in the Council of Ephesus in 431, which led to the deposition of Nestorius as Patriarch of Constantinople.

Cyril is counted among the Church Fathers and also as a Doctor of the Church and his reputation within the Christian world has resulted in his titles Pillar of Faith and Seal of all the Fathers. The Roman emperor Theodosius II, however, condemned him for behaving like a “proud pharaoh”, and the Nestorian bishops at their synod at the Council of Ephesus declared him a heretic, labelling him as a “monster, born and educated for the destruction of the church.”

His attributes are, as a Bishop with phelonion and omophorion, and usually with his head covered in the manner of Egyptian monastics (sometimes the head covering has a polystavrion pattern); depicted holding a Gospel Book or a scroll, with his right hand raised in blessing. His Patronage is Alexandria. Alexandria was the largest city in the ancient world.

It was a sprawling mixture of races and creeds; and it was a byword for the violence of its sectarian politics, whether of Greeks against Jews or of orthodox Christians against heretics. Cyril began his career as a worthy follower of this tradition. He succeeded his uncle as bishop of Alexandria in 412, and promptly solved a number of serious problems by closing the churches of the Novatian heretics and expelling the Jews from the city.

This caused trouble and led to an ongoing quarrel with the Imperial governor of the city and to murderous riots. It is not for this part of his life that St Cyril is celebrated. In 428, Nestorius, the new Patriarch of Constantinople (and hence one of the most important bishops in the world) made statements that could be interpreted as denying the divinity of Christ.

The dual nature – human and divine – has always been hard for us to accept or understand, and if it seems easy it is only because we have not thought about it properly. Those who dislike problems have had two responses: to deny the human nature of Christ or to deny his divinity: and either leads to disaster, since both deny the Incarnation and hence the divinisation of human nature.

The resulting battle was as unedifying as most of the early fights that defined the shape of Christianity, because both sides were concerned to defend something that they saw as being of infinite and eternal importance. If it had been a question of power politics, of who got what post and what revenues, the matter could have been settled quietly – but this was not about power.

It was important, and the victory was more important than the methods. Seen from fifteen centuries later, the proceedings seem melodramatic and absurd. Cyril arriving at the Council of Ephesus accompanied by fifty bishops wielding the fifth century equivalent of baseball bats, the Emperor, burdened with a sister who supported Cyril and a wife who supported Nestorius. 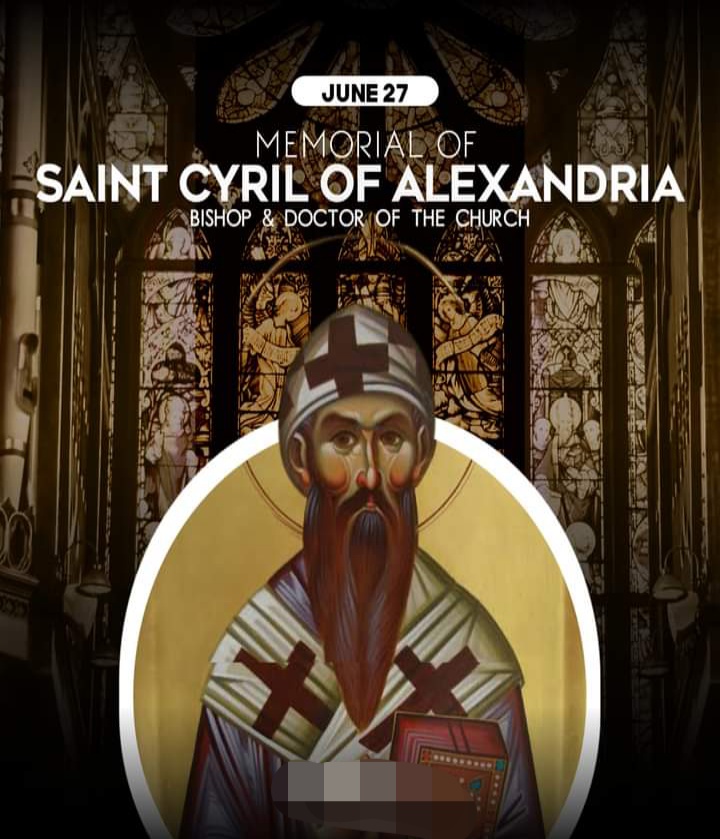 The ratification of the contradictory decrees of both the council that supported Cyril and the council that supported Nestorius; the imprisonment of both bishops; the bribery. To revere Cyril of Alexandria is not to approve the methods he used. He fought according to the conventions of the time, and with its weapons. But he never sought to destroy Nestorius or any of his opponents, only to win the day for the truth of salvation.

After the conclusions of the Council, Cyril was moderate and conciliatory, and sought to reconcile to the Church any Nestorians who were willing to engage in dialogue. It is largely through his efforts that we can celebrate (even if we still fail to understand completely) the two natures of Christ, and that we can address Mary as “Mother of God”. It is as a theologian rather than as a politician that Cyril is honoured.

At Easter 429 A.D., Cyril wrote a letter to the Egyptian monks warning them of Nestorius’s views. A copy of this letter reached Constantinople where Nestorius preached a sermon against it. This began a series of letters between Cyril and Nestorius which gradually became more strident in tone. Finally, Emperor Theodosius II convoked the Council of Ephesus (in 431) to solve the dispute.

Cyril selected Ephesus as the venue since it supported the veneration of Mary. The council was convoked before Nestorius’s supporters from Antioch and Syria had arrived and thus Nestorius refused to attend when summoned. Predictably, the Council ordered the deposition and exile of Nestorius for heresy.

However, after John of Antioch condemned Cyril for heresy, deposed him from his see, Theodosius, by now old enough to hold power by himself, annulled the verdict of the Council and arrested Cyril, but Cyril eventually escaped. Having fled to Egypt, Cyril bribed Theodosius’s courtiers, and sent a mob led by Dalmatius, a hermit, to besiege Theodosius’s palace, and shout abuse; the emperor eventually gave in, sending Nestorius into minor exile.

Cyril died about 444, but the controversies were to continue for decades, from the “Robber Synod” of Ephesus (449) to the Council of Chalcedon (451) and beyond. He questioned how anyone could doubt the right of the holy Virgin to be called the Mother of God. This filled him with astonishment.

Surely she must be the Mother of God if our Lord Jesus Christ is God, and she gave birth to him! Our Lord’s disciples may not have used those exact words, but they delivered to us the belief those words enshrine, and this has also been taught us by the holy fathers.

In the third book of his work on the holy and consubstantial Trinity, our father Athanasius, of glorious memory, several times refers to the holy Virgin as “Mother of God.” I cannot resist quoting his own words: “As I have often told you, the distinctive mark of holy Scripture is that it was written to make a twofold declaration concerning our Saviour; namely, that he is and has always been God, since he is the Word, Radiance and Wisdom of the Father; and that for our sake in these latter days he took flesh from the Virgin Mary, Mother of God, and became man.” 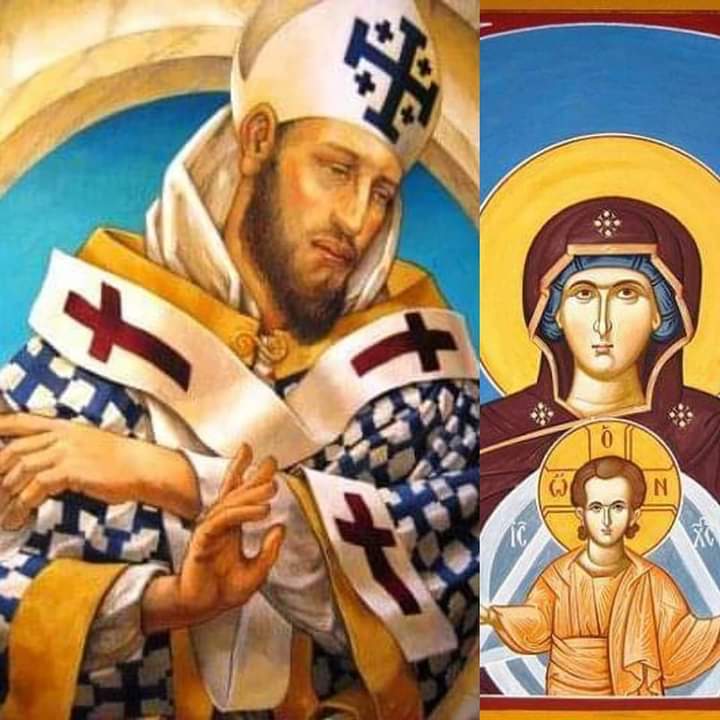 Again further on he says: “There have been many holy men, free from all sin. Jeremiah was sanctified in his mother’s womb, and John while still in the womb leaped for joy at the voice of Mary, the Mother of God.” Athanasius is a man we can trust, one who deserves our complete confidence, for he taught nothing contrary to the sacred books.

The divinely inspired Scriptures affirm that the Word of God was made flesh, that is to say, he was united to a human body endowed with a rational soul. He undertook to help the descendants of Abraham, fashioning a body for himself from a woman and sharing our flesh and blood, to enable us to see in him not only God, but also, by reason of this union, a man like ourselves.

It is held, therefore, that there are in Emmanuel two entities, divinity and humanity. Yet our Lord Jesus Christ is nonetheless one, the one true Son, both God and man; not a deified man on the same footing as those who share the divine nature by grace, but true God who for our sake appeared in human form. We are assured of this by Saint Paul’s declaration: When the fullness of time came, God sent his Son, born of a woman, born under the law, to redeem those who were under the law and to enable us to be adopted as sons.

O God, who made the Bishop Saint Cyril of Alexandria an invincible champion of the divine motherhood of the most Blessed Virgin Mary, grant, we pray, that we, who believe she is truly the Mother of God, may be saved through the Incarnation of Christ your Son. Who lives and reigns with you in the unity of the Holy Spirit, one God, for ever and ever. Amen 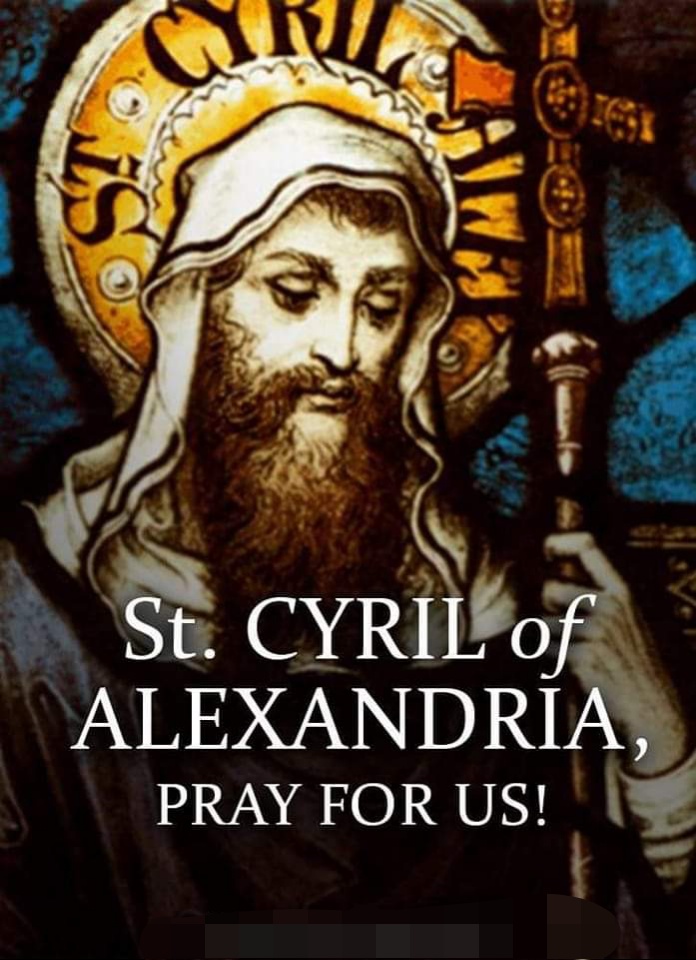 Saint Cyril of Alexandria, pray for us.