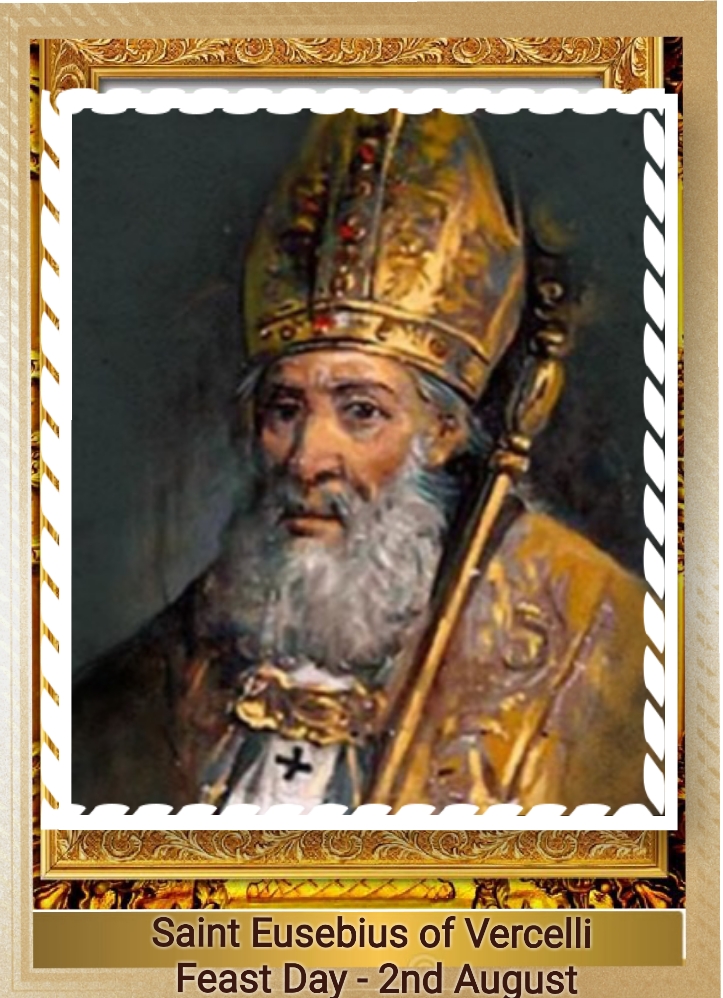 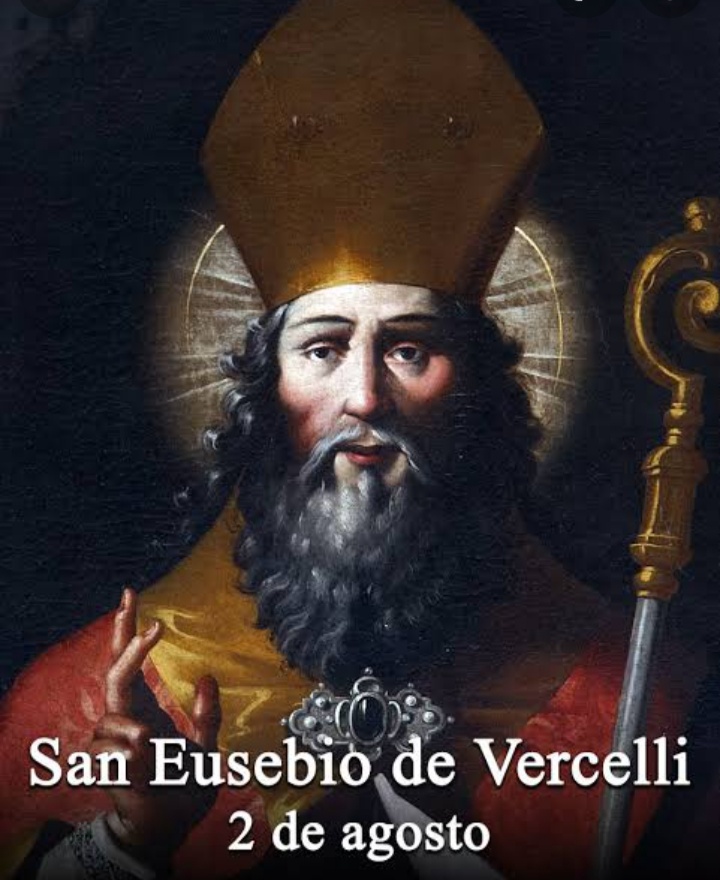 Eusebius of Vercelli (c. 283 – Vercelli , 1 August 371 ) was the first bishop of the ancient diocese of Vercelli and was one of the main exponents of the fight against the spread of the Arian heresy, is venerated as a saint by the Catholic Church. According to tradition, he moved with his mother and younger sister to Rome after the martyrdom of his father.

In “Urbe” he was first “reader” and then ordained priest by Pope Mark and consecrated bishop by Pope Julius I on December 15, 345 . However, there is no news of his episcopate prior to 354 when, in a letter from Bishop Ambrose of Milan, he is praised for having imposed a common life on the clergy of his diocese, as for the monks, according to the model of the Eastern Churches. For this reason, he is also honored as the co-founder of his order by Canons Regular of Saint Augustine.

He devoted himself with great commitment to the evangelization of rural and largely pagan areas. He founded a priestly society inspired by the monastic model from which important bishops and saints emerged. Eusebius defended the thesis of the “full divinity of Jesus Christ” against the Arian policy of Emperor Constantius II, for whom the Arian faith was politically more interesting. This attitude cost him exile and exile first to Scythopolis, Palestine, then to Cappadocia and Thebaid, Egypt .

This was a difficult time for the Church. Constantius seemed to have long forgotten the era of tolerance and peace initiated by his father Constantine with the Edict of Milan. Ariansnus, condemned at the Council of Nicaea ( 325 ), without the support of the Emperor, had disappeared but, at the Synod of Arles ( 353 ), he would again triumph in his concepts. Pope Liberius had refused, however, to adopt a peaceful way to resolve the vexing problem.

Pope Liberius then sent him along with Lucifer, Bishop of Cagliari (early 354 ), on a mission to Emperor Constantius II to request the convening of a council to end the dispute between the Arians (supported by the Emperor himself) and the followers of orthodoxy. Constantius yielded to the appeal and the council was convened at Milan in 355.

There were two basic problems: the recognition of the creed adopted at Nicaea and the defense of Athanasius of Alexandria. However, the Aryan group formed and directed by Valente de Mursa and Ursácio de Singiduno managed to get the council to adopt its pre-established criteria. As the Arian bishops were in the majority, Eusebius refused to sign the decrees of the council.

He and other resisters such as Osio of Cordoba and Lucifer of Cagliari, were banned. Eusebius was confined at Scythopolis in Palestine (Bethel St.), under the supervision of the Arian bishop Patrophilus of Scythopolis. In spite of everything, he always maintained an epistolary correspondence with the community of his faithful and in his letters he asks them to “greet those who are outside the Church and who deign to nourish feelings of love for us”.

His relationship with his diocese was not limited to Christians but extended to all who in some way recognized his spiritual authority or respected him as an exemplary man. In his correspondence he pathetically recounts to the faithful the injuries, violence and abuse with which he was treated. He was later transferred to Cappadocia and Upper Thebaid, Egypt, where he could better understand the soul of the East and its ways of life.

In late 361 , with the death of Constantius II and the accession of Julian the Apostate, the exiles were able to return to the place where they had previously lived. Eusebio returned to his diocese. In the following year 362, he assisted in the Council of Alexandria, convened by Athanasius, who decided to pardon Arian bishops who return to the lay state.

Then, named after the diocese, Eusebius set out on a visitation to Palestine and Syria to report on the decisions of the Council of 362 , enact its decisions, and restore the faith. In the year 363 he returned to Vercelli. He educated the clergy of his diocese with the observance of monastic rules, although they lived in the middle of the city, because “the bishop and the clergy must share the problems of the citizens.

With a credible attitude, cultivating at the same time a diverse citizenship, the trust of the citizens was won. In the years that followed, at the head of the episcopate, together with Hilary of Poitiers , he faced the semi- Arianism (the Homoianian doctrine ) of Auxentius of Milan , bishop of Mediolanus who defended the Christological formula of Valente de Mursa and Ursace of Singidunus, in which the ” … Son was similar to the Father, either “in all things” or “according to the scriptures.” 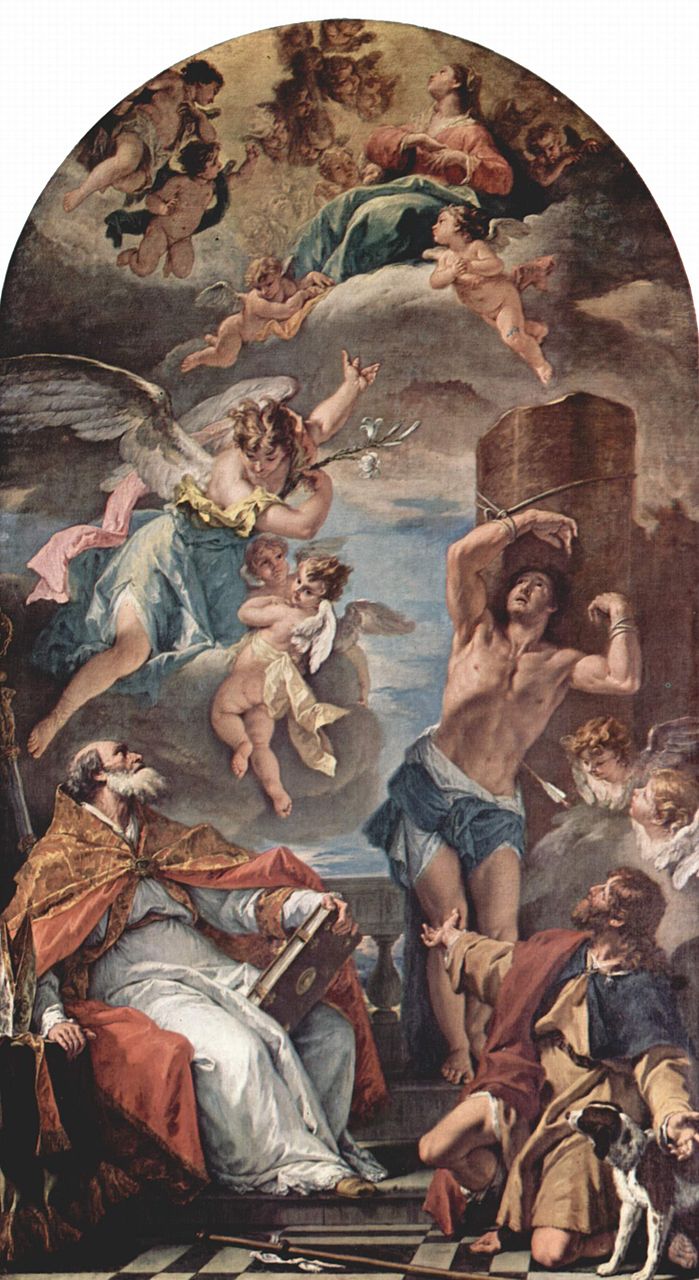 Formula also defended by the Acacians , by the prelates Demophilus of Constantinople , bishop of Berea and Constantinople ( 370 – 380 ) Germinius of Sirmium , Acacius of Caesarea , bishop of Caesarea ( 340 ) – 366 ), and accepted by Ósio of Cordoba and Aetius , patriarch of Antioch . The struggle against Arianism filled his whole life, but it did not prevent him from also being a great promoter of monasticism in the West.

He himself lived as a member of his community of priests. The Catholic Encyclopedia states the following: Three short letters from Eusebius were published in Pat. Lat de Migne. Jerome , in his De Viris Illustribus attributes to him a Latin translation of the commentaries on the psalms , originally written in Greek by Eusebius of Caesarea , a work that has been lost.

The Codex Vercellensis , preserved in Vercelli Cathedral, is considered to be the oldest manuscript of the gospels in Old Latin(“Codex A”) and is believed to have been written by Eusebius. It was published by Irico (Milan 1748) and Bianchini (Rome 1749), it was reprinted by Migne. [ 12 ] Finally, a new edition was published by Belsheim (Christiania 1894).

Of the three letters, recognized as authentic, are: the first to Emperor Constantius, announcing the receipt of the notification of the Synod and announcing that he is going to Milan, the other, already mentioned, is addressed to the presbyters and people of Italy. ; attached hereto is the Exemplar libelli facti ad Patrophilum . The third to Gregory of Elvira . It appears that information received from this led to his misjudgment of Hosius ‘ conduct .

He is also credited with the manuscript of the Gospels (s. IV), which is preserved in the cathedral of Vercelli, of six and a Latin translation of the Commentary on the Psalms by Eusebius of Caesarea . Likewise, although no solid foundation, the Quicumque Symbol or Creed of Athanasius where it is stated that Jesus “descended into hell” also attributed to Vincent de Lérins , Hilary of Poitiers and others; an extensive confession of faith;

The Twelve Books Of Trinitate, which took place under the name of Saint Athanasius and which JP Migne attributes to Vigilio Thapse . M. Simonetti, contrary to the Bulhart VP Schepens hypothesis, denies that this work predates Augustine of Hippo. Eusebius died in the first days of August, 371.

Saint Eusebius, you suffered for the truth, not just spiritually but physically. You endured exile from family, friends, and church rather than capitulate to false teachings. May your example inspire, and your intercession empower, all pastors and teachers to equal bravery. Amen 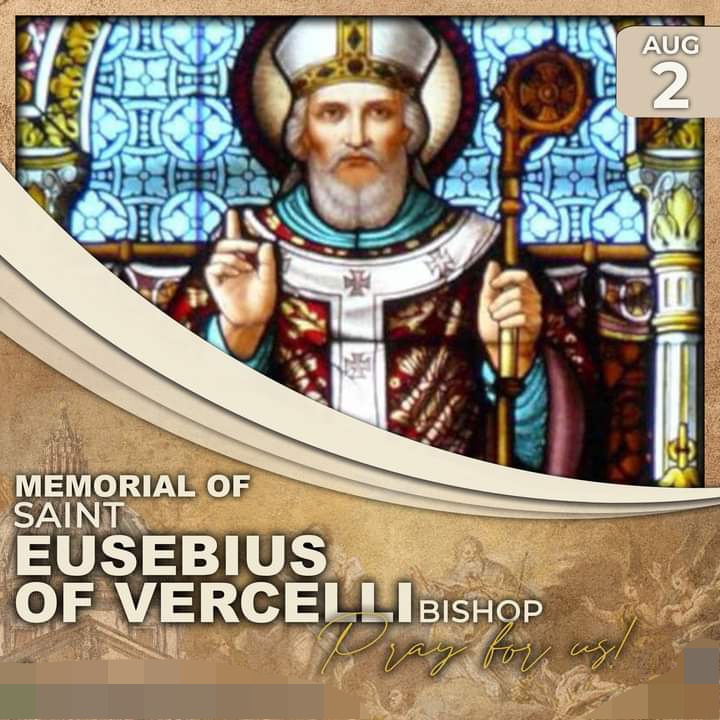