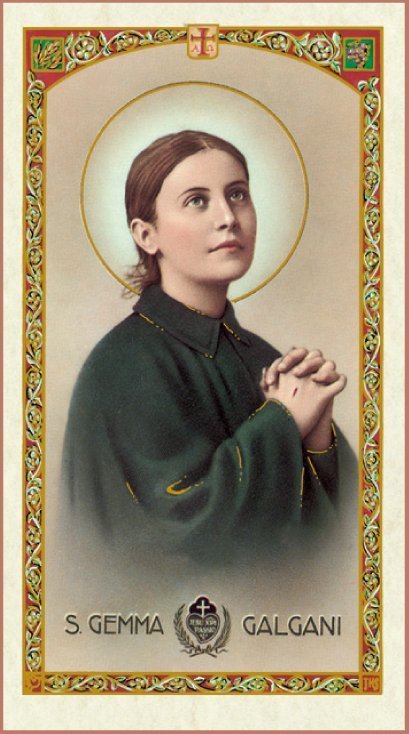 Gemma (12 March 1878 – 11 April 1903), was born on March 12, 1878 in Camigliano, Italy, and soon after her birth her family moved to Lucca, Italy, where she remained the rest of her life. Her mother Aurelia, a holy woman, died when Gemma was only 8 years old. The loss of her mother at such a young age was a sword of suffering upon her little heart. Her first communion was in June 1887.

Eleven years later, at age 19, she would lose her father too, leaving her and her brothers and sisters orphans. Not long after, she became gravely ill with spinal meningitis, becoming bedridden and on the verge of death. It was at this point that the extraordinary graces in her life began. The Passionist St. Gabriel Possenti began appearing in a series of visions, encouraging her and helping her to make a Novena to the Sacred Heart of Jesus in hopes for a cure.

It was at this time that the attending Doctors resigned her to die. On March 3, 1899, Jesus appeared to Gemma and cured her on the last day of the Novena, which coincided with the First Friday of the month (which is devoted to the Sacred Heart of Jesus). It was at this time also that Gemma began receiving inner locutions (interior words) from Jesus, and she began to see her guardian Angel who inspired and instructed her in the practice of virtues. 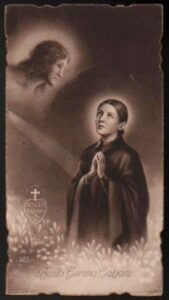 On the morning of June 8 1899, she was enlightened during Holy Communion, that she would soon be receiving a great grace from Jesus. That evening, the Blessed Mother appeared to her, along with her guardian Angel. The Blessed Virgin told her, “Jesus my Son loves you very much and He wishes to give you a grace. Do you know how to make yourself worthy of it?” In my misery I did not know what to answer.

Gemma further related, “Mother Mary continued, “I will be your Mother. Will you be a true daughter?” She then spread her mantle and covered me with it. At that moment Jesus appeared with all His wounds open, but blood no longer came out of those wounds. Rather, flames of fire issued forth from them and in an instant these flames came to touch my hands, my feet and my heart. I felt as if I would die. I fell to the floor, but my Mother supported me, keeping me covered in her mantle.

I had to remain several hours in that position. Finally, she kissed me on my forehead, and all vanished, and I found myself kneeling on the floor. But I still felt an intense pain in my hands, feet and heart. I arose to go to bed, and I then noticed that blood was flowing from those parts where I felt pain. I covered them as well as I could, and then with the help of my angel, I was finally able to go to bed.

These sufferings and pains, although they afflicted me, filled me with perfect peace. The next morning I was able to go to Communion with great difficulty, and I put on a pair of gloves in order to hide my hands. I could hardly stand on my feet, and I thought I would die at any minute. The sufferings continued until 3.00 on Friday afternoon, the solemnity of the Sacred Heart of Jesus.” Gemma was credited with performing miraculous cures in 1899.

She received the Stigmata in 1899, when pain and marks appeared on her feet, hands, and heart with blood emerging from wounds. It was at this point that Gemma began suffering as a victim soul for the conversion of sinners. She continued this extraordinary mission until the end of her life. At times, accompanying the Stigmata were also the Crown of Thorns and also the Scourging which is well documented by her Spiritual Director, Venerable Father Germanus C.P.

Along with suffering in union with Jesus for the conversion of souls, she was drawn into the most remarkable and sublime ecstasies where she conversed and often pleaded with Jesus for sinners, for the souls in Purgatory, for love and for mercy upon humanity, always telling Jesus of her love for Him, and offering herself as a holocaust and victim to obtain these graces. Quiet and reserved, she loved the poor.

With the death of her father in 1897, she had to take care of seven sisters and brothers. She contracted meningitis, however, preventing her from becoming a nun. In September 1902, Gemma became severely ill with Tuberculosis. By that time the fever of disease had begun to consume the innocent victim of divine Justice. Early in September she became very sick, vomiting blood in quantities.

The one who watched by her bed wrote to her Director: “She is reduced to skin and bones; she suffers excruciating pains. One cannot bear the torment of not knowing what to do to relieve her. Gemma feels great need of you. Come quickly and tell us what to do.” On receiving other pressing requests, he wrote, “I determined to go and reached Lucca in the month of October”. 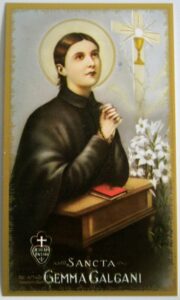 “The poor child showed the greatest joy when she was told that I had come, and wished to get up to welcome me. Imagine my grief at finding her in such a state, added to my fear that God this time would act indeed. I blessed her and bade her go back to bed; then sitting by her side I said: ‘Well Gemma, what are we to do?’ ‘Go to Jesus, Father,’ she answered, in a tone of inexpressible joy.

‘But really?’ I added. ‘Yes, Father, this time Jesus has told me clearly, so clearly. To Heaven, my Father, to Jesus, with Jesus in Heaven!’ ‘But,’ I rejoined, ‘our sins, how are we to atone for them? You would make it an easy matter!’ And she answered, ‘Jesus has thought of that. He will let me suffer so much in the short time I have to live, that, sanctifying my poor pains by the merits of His Passion, He will be satisfied and will take me with Him to Paradise.’

‘But,’ I said, ‘I do not wish you to die yet.’ And she, in her spirited way, replied- ‘And should Jesus wish it, what then?’ She then gave all the particulars of her death and burial with the calmness of one discussing an ordinary affair. In the Confession she made that evening, she accused herself of the sins of her whole life with such compunction that he could not restrain his tears at seeing such lively sentiments of sorrow in one who had never stained the spotless robe of baptismal innocence by a deliberate sin.

In the morning, dressed as a bride with a white veil on her head she received Holy Viaticum, “looking,” says Father Germano, “like an Angel in adoration before the Majesty of God.” Afterwards she said to him: “If you wish, Father, you can leave, as I shall not die now. This illness will certainly finish me, but not yet; at least, that is what Jesus has told me.” Thus the months dragged on.

Gemma lived in the closest union of love and suffering with Jesus Crucified. Through the offering of her sufferings, the Victim Soul was obtaining countless graces each day for the conversion of sinners. Holy Week arrived and now the victim of Jesus was to be made conformable to His Death. On Good Friday, April 10, 1903 she said to Cecilia Giannini who was attending her: “Don’t leave me until I am nailed to the Cross. I must be crucified with Jesus. He has said that His children must be crucified.”

She then went into ecstasy and gradually extending her arms, she remained in that posture for about three hours – an image of Jesus dying on the Cross. All that day and night her agony continued. On the morning of Holy Saturday, April 11, 1903, at about 8:00am she received Viaticum and the Last Anointing. At around 1:30, with the crucifix in her hands she said: “Jesus, now it is indeed true that nothing remains for me. If it be Thy will, take me.”

Glancing at the picture of Mary, she added: “My Mother, I recommend myself to You. Ask Jesus to have mercy on me.” Then, in a feeble voice: “Jesus, I commend to You this poor soul of mine, Jesus.” These were her last words. She kissed the crucifix, placed it over her heart, folded her hands over it, and closed her eyes. Then, after a few moments, she turned her head on the pillow and ceased to breathe. 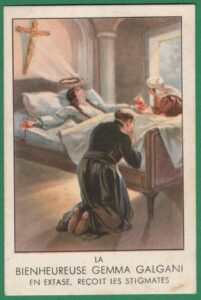 Thus her holy soul took flight to be forever united with the God whom she loved with all the strength of her heart. The priest who was reading the last prayers of the Church never knew the moment of her passing. “I have assisted many sick people,” he said, “but I never knew one to die in that way, without a tear or a sigh. She died with a smile and the smile remained on her lips so that I could hardly convince myself that she was really dead.”

And one of the Nursing Sisters from the order of St Camillis de Lellis who was caring for Gemma in her last days attested: “We have cared for a great many sick people, but we have never seen anything like this.” The inscription placed on her tomb read: “Gemma Galgani of Lucca, a most innocent virgin, while in her 25th year, consumed rather by the fire of Divine Love than by the violence of disease, flew into the arms of her Heavenly Spouse on Holy Saturday, the eleventh of April, 1903. Peace be to Thee, O sweet soul, in company with the Angels”

Following beatification in 1933 by Pope Pius XI, she was canonized by Pope Pius XII in 1940. Her feast day is celebrated on April 11. She is the patron saint of parachutists and paratroopers, students, those suffering back pain, headaches, and struggling with impure thoughts, pharmacists, people seeking greater spiritual purity, people who are grieving the deaths of parents and tuberculosis.

Behold me at Your most holy feet, O dear Jesus, to manifest to you my gratitude for the continual favors which You have bestowed upon me, and still wish to bestow upon me. As many times as I have invoked You, O Jesus, You have made me content; I have often had recourse to You and You have always consoled me.

How shall I express myself to You, dear Jesus? I thank you! Yet one more grace I desire of you, O my God, if it would be pleasing to You (here mention your request). If you were not omnipotent, I would not make this request. O Jesus, have pity on me. May your most holy will be done in all things. Amen 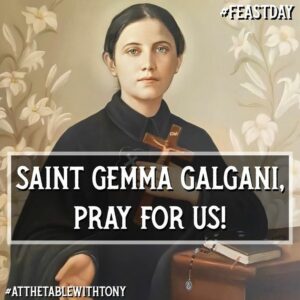 Saint Gemma Galgani, pray for us.