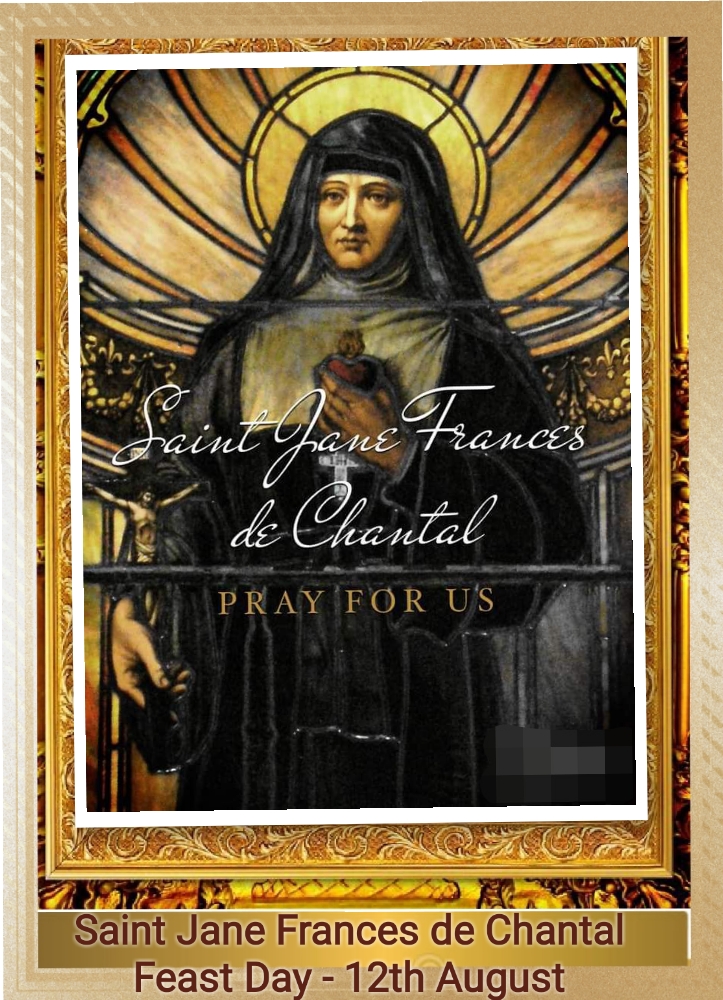 Jane Frances de Chantal (28 January 1572 – 13 December 1641) is a Catholic saint, who was beatified in 1751 and canonized in 1767. She founded the religious Order of the Visitation of Holy Mary. The order accepted women who were rejected by other orders because of poor health or age. When people criticized her, Chantal famously said, “What do you want me to do? I like sick people myself; I’m on their side.”

During its first eight years, the new order also was unusual in its public outreach, in contrast to most female religious who remained cloistered and adopted strict ascetic practices. Jane Frances was wife, mother, nun, and founder of a religious community. Her mother died when she was 18 months old, and her father, head of parliament at Dijon, France, became the main influence on her education.

Jane developed into a woman of beauty and refinement, lively and cheerful in temperament. At 21, she married Baron de Chantal, by whom she had six children, three of whom died in infancy. At her castle, she restored the custom of daily Mass, and was seriously engaged in various charitable works. Jane’s husband was killed after seven years of marriage, and she sank into deep dejection for four months at her family home. 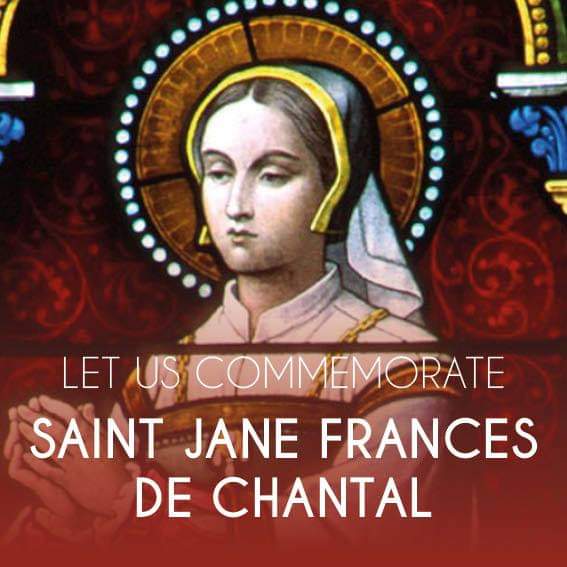 Her father-in-law threatened to disinherit her children if she did not return to his home. He was then 75, vain, fierce, and extravagant. Jane Frances managed to remain cheerful in spite of him and his insolent housekeeper. When she was 32, Jane met Saint Francis de Sales who became her spiritual director, softening some of the severities imposed by her former director. She wanted to become a nun but he persuaded her to defer this decision. She took a vow to remain unmarried and to obey her director.

After three years, Francis told Jane of his plan to found an institute of women that would be a haven for those whose health, age, or other considerations barred them from entering the already established communities. There would be no cloister, and they would be free to undertake spiritual and corporal works of mercy. They were primarily intended to exemplify the virtues of Mary at the Visitation—hence their name the Visitation nuns—humility and meekness.

The usual opposition to women in active ministry arose and Francis de Sales was obliged to make it a cloistered community following the Rule of Saint Augustine. Francis wrote his famous Treatise on the Love of God for them. The congregation consisting of three women began when Jane Frances was 45. She underwent great sufferings. 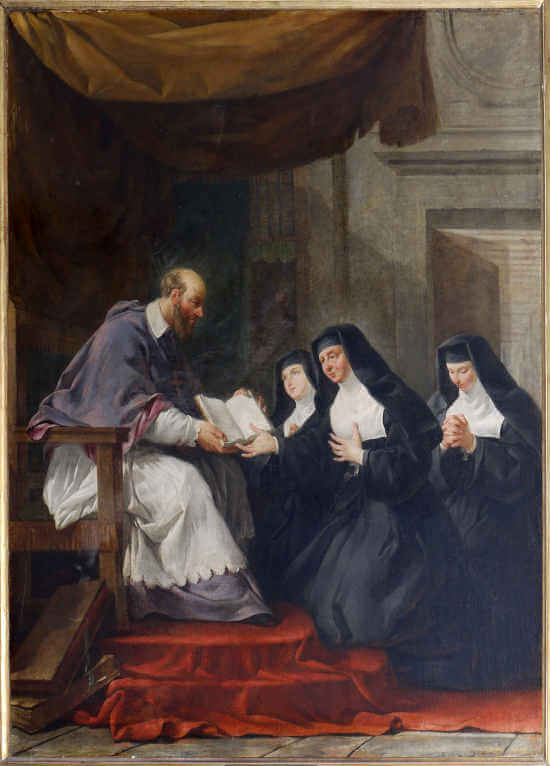 Francis de Sales died, her son was killed; a plague ravaged France; her daughter-in-law and son-in-law died. She encouraged the local authorities to make great efforts for the victims of the plague, and she put all her convent’s resources at the disposal of the sick. During a part of her religious life, Jane had to undergo great trials of the spirit—interior anguish, darkness, and spiritual dryness. She died while on a visitation of convents of the community.

She was beatified on 21 November 1751 by Pope Benedict XIV, and canonized on 16 July 1767 by Pope Clement XIII. Saint Jane Frances’s feast day was included in the General Roman Calendar in 1769, two years after she was canonized. Her feast was set as 21 August. In the 1969 revision of the calendar, her feast was moved to 12 December, to be closer to the day of her death, which occurred on 13 December 1641, the feast of Saint Lucy. 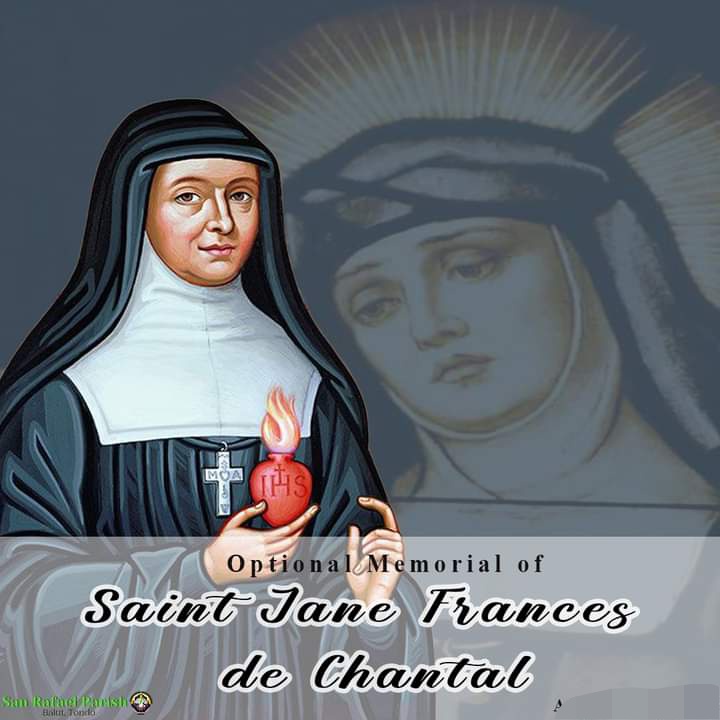 In 2001, Pope John Paul II included in the General Roman Calendar the memorial of Our Lady of Guadalupe on 12 December. Consequently, he moved the memorial of Saint Jane Frances to 12 August. In 2022, Jane Frances de Chantal was officially added to the Episcopal Church liturgical calendar with a feast day shared with Francis de Sales on 12 December. Jane Frances de Chantal is invoked as the patron of forgotten people, widows, and parents who are separated from their children.

Saint Jane, you forgave the man who killed your husband, bringing a lot of hardship into your life. Help us too, to learn to forgive people who have caused harm and havoc in our lives, despite our kindnesses towards them.

Saint Jane, you know how difficult it is to forgive many things which seem simply unforgivable and sinful in others. Help us to inculcate mercy in our approach towards all, maintaining peace in our lives. Amen 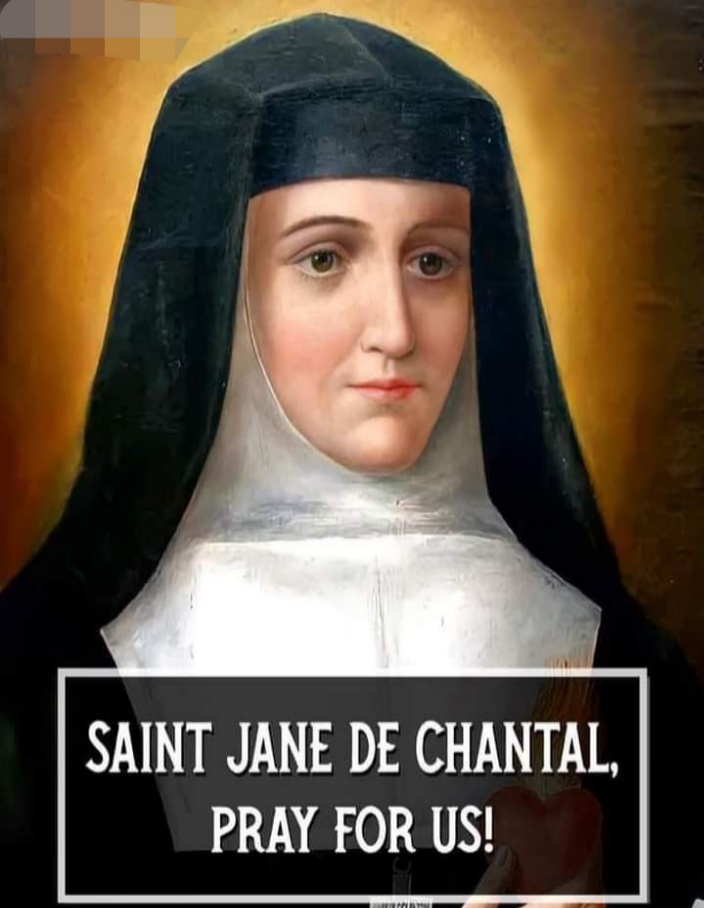 St. Jane Frances, pray for us!