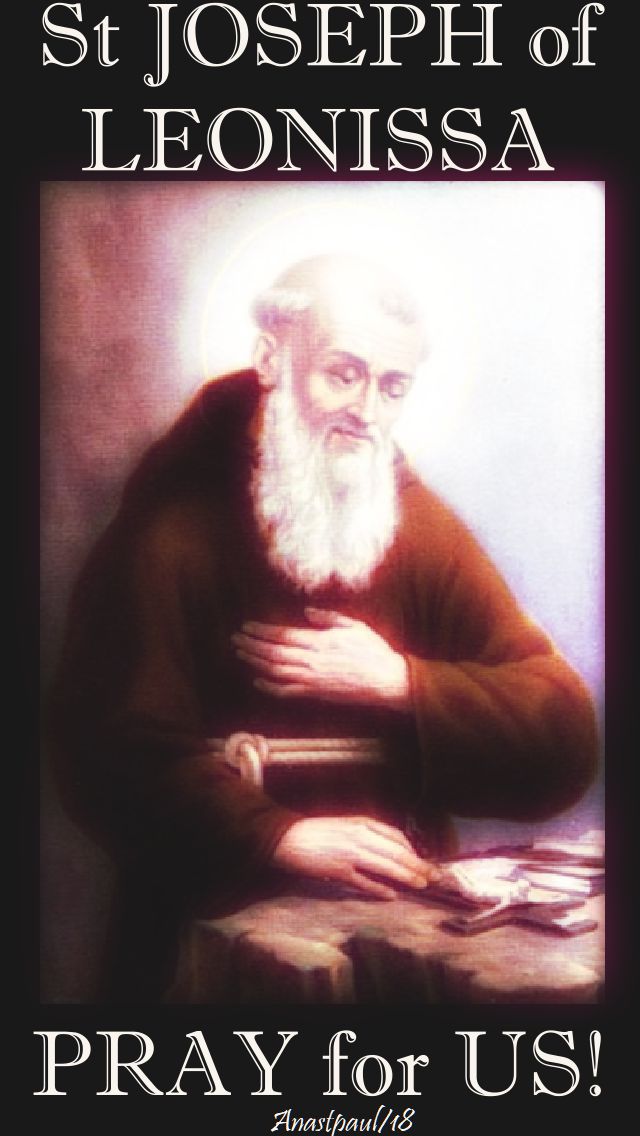 Joseph of Leonessa/Leonissa lived from 1556 to 1612 AD. He was born Eufranio Desiderio at Leonessa, a small town then in Umbria, now in the Lazio. It is said that from a young age he showed a remarkably religious bent of mind. He used to erect little altars and spend much time in prayer before them, and often he would gather his companions and induce them to pray with him.

Whilst yet a boy he used to take the discipline on Fridays in company with the Confraternity of the Holy Savior. He was educated by his uncle, who had planned a suitable marriage for him, but in his sixteenth year he fell sick of a fever, and upon his recovery, without consulting his guardian, he joined the Capuchin reform of the Franciscan Order. He made his novitiate at the friary of the Carcerelle near Assisi.

As a friar he was remarkable for his great abstinence. “Brother Ass”, he would say to his body, “there is no need to feed thee as a noble horse would be fed: thou must be content to be a poor ass.” In 1599, the year before the Jubilee year, he fasted the whole year by way of preparation for gaining the indulgence.

In 1587 he was sent by the Minister General of his Order to Constantinople to minister to the Christians held captive there. Arrived there, he and his companions lodged in the Galata district in a derelict house of Benedictine monks, actually the St. Benedict High School.

The poverty in which the friars lived attracted the attention of the Turks, who went in numbers to see the new missionaries. He was very solicitous in ministering to the captive Christians in the galleys of the Ottoman Empire’s navy. Every day he went into the city to preach, and he was at length thrown into prison and only released at the intervention of the Venetian agent.

Urged on by zeal he at last sought to enter the palace to preach before Sultan Murad III and tried to convert Muslims, but he was seized and condemned to death. For three days he hung on the gallows, held up by two hooks driven through his right hand and foot. Legends state that he was then miraculously released by an angel.

Returning to Italy, he took with him a Greek archbishop who had apostatized, and who was reconciled to the church on their arrival in Rome. Joseph now took up the work of home missions in his native province, sometimes preaching six or seven times a day. In the Jubilee year of 1600 he gave the Lenten sermons at Otricoli, a town through which crowds of pilgrims passed on their way to Rome. Many of them being very poor, Joseph supplied them with food, washed their clothes and cut their hair. At Todi he cultivated with his own hands a garden, the produce of which was for the poor.

He died at Amatrice in 1612. He was canonized by Pope Benedict XIV in 1746. His feast day is kept on February 4, within the Franciscan Order. In his hometown, there is a church and sanctuary of San Giuseppe da Leonessa. The main street is named after him, the Corso San Giuseppe. Devotion to him is largely in central Italy. Churches in Otricoli, San Lorenzo Nuovo, and Rivodutri contain paintings of him.

In the words of Saint Joseph of Leonessa:- “Every Christian must be a living book wherein one can read the teaching of the gospel. This is what St Paul says to the Corinthians. Our heart is the parchment; through my ministry the Holy Spirit is the writer because ‘my tongue is like the pen of a ready scribe’ (Psalm 45:1)”

Almighty God, You made Saint Joseph of Leonessa, an illustrious preacher of the gospel. Through his prayers inflame us with love and with his zeal for souls that we may serve You alone.

We make this prayer through our Lord Jesus Christ your Son, Who lives and reigns with you in the unity of the Holy Spirit, One God forever and ever. Amen 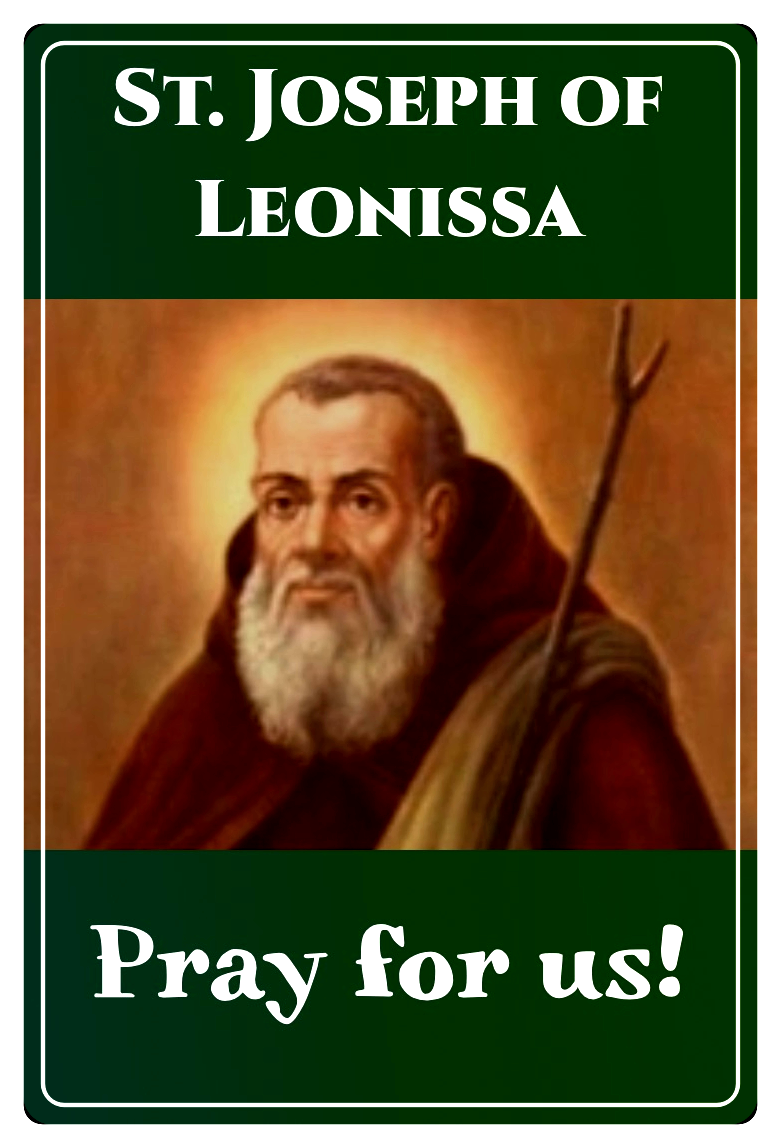 St Joseph of Leonessa, pray for us. 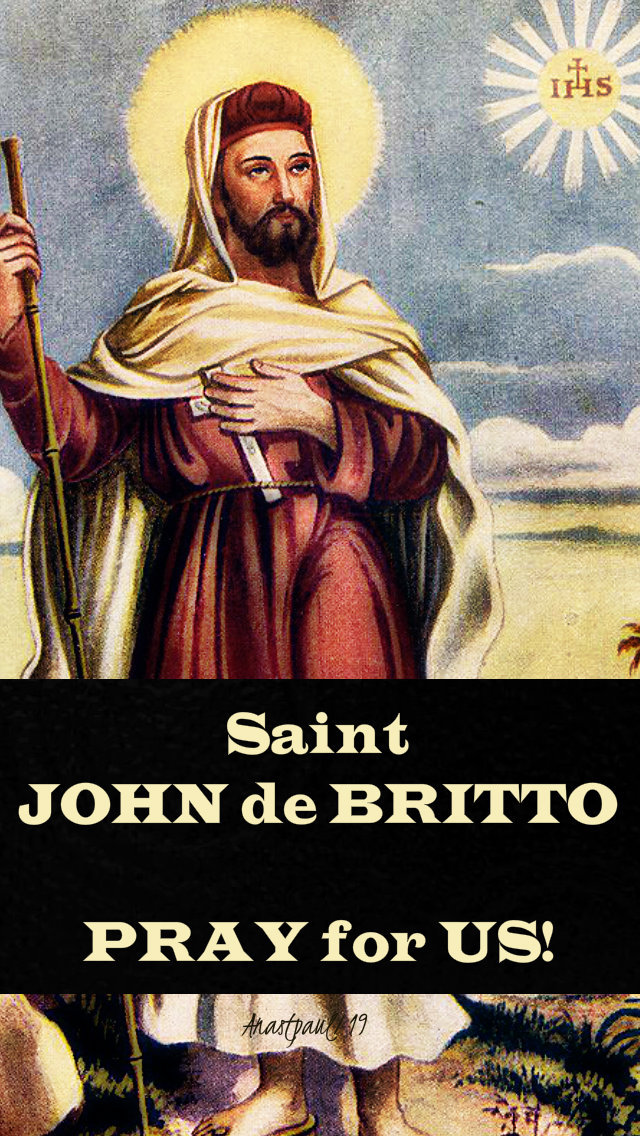 John de Britto was the scion of a powerful aristocratic Portuguese family; his father, Salvador de Britto Pereira, died while serving as Viceroy of the Portuguese colony of Brazil. He joined the Jesuits in 1662, studying at the famous University of Coimbra. He travelled to the missions of Madurai, in Southern India, present-day Tamil Nadu, in 1673 and preached the Christian religion in the region of the Maravar country. He renamed himself Arul Anandar in Tamil. The ruler of the Maravar country imprisoned him in 1684. Having been expelled, he returned to Lisbon in 1687 and worked as a missions procurator. King Pedro II wanted him to stay, but in 1690 he returned to the Maravar country with 24 new missionaries.

The Madurai Mission was a bold attempt to establish an Indian Catholic Church that was relatively free of European cultural domination. As such, Britto learned the native languages, went about dressed in yellow cotton, and lived like a Thuravi/Sanyaasi, abstaining from every kind of animal food and from wine. St John de Britto tried to teach the Catholic faith in categories and concepts that would make sense to the people he taught. This method, proposed and practiced by Roberto de Nobili, met with remarkable success. Britto remained a strict vegan until the end of his life, rejecting meat, fish, eggs and alcohol, and living only on legumes, fruits and herbs.

John de Britto’s preaching led to the conversion of Thadiyathevan, a Marava prince who had several wives. When Thadiyathevan was required to dismiss all his wives but one, a serious problem arose. One of the wives was a niece of the neighbouring king, the Raghunatha Kilavan Sethupathi, the King of Ramnad (Ramanathapuram), who took up her quarrel and began a general persecution of Christians. Britto and the catechists were taken and carried to the capital, Ramnad. Thence he was led to Orur, some 30 miles northward along the coast, where he was executed on 4 February 1693.

Britto was beatified by Pope Pius IX on 21 August 1853. He was canonised by Pope Pius XII on 22 June 1947. St John de Britto’s feast day is 4 February. He is Patron of Portugal, Roman Catholic Diocese of Sivagangai, Sakthikulangara.

Glorious St John, you returned to the place of your persecution to do God’s work, despite danger to your life.

We pray for all who are in danger as they serve God, to be sheltered from all harm.  Amen 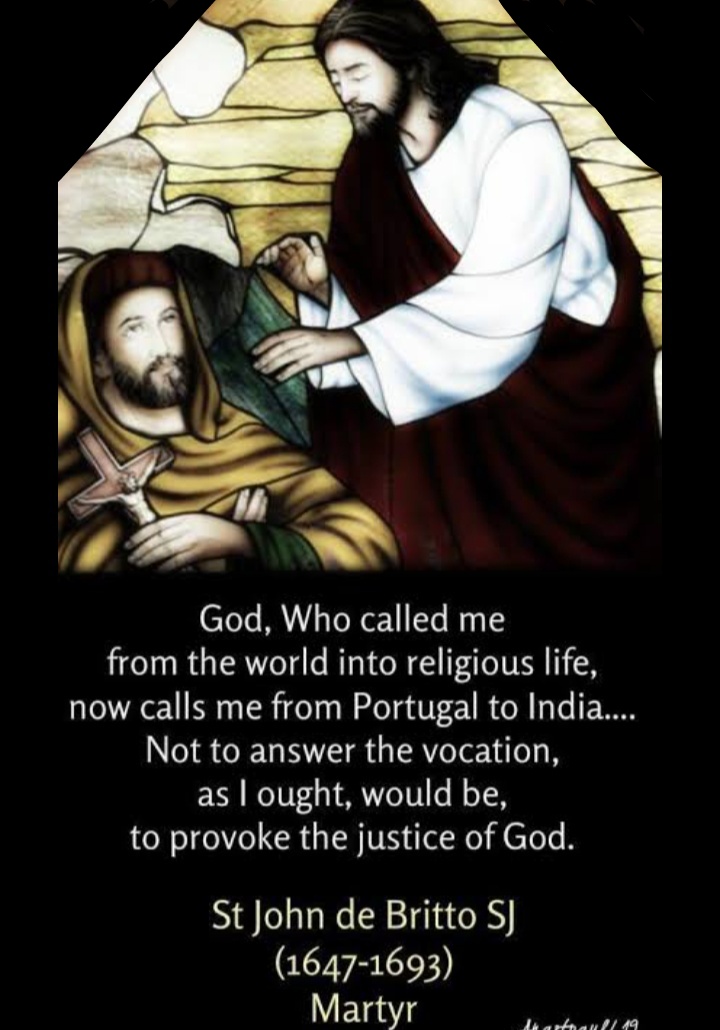