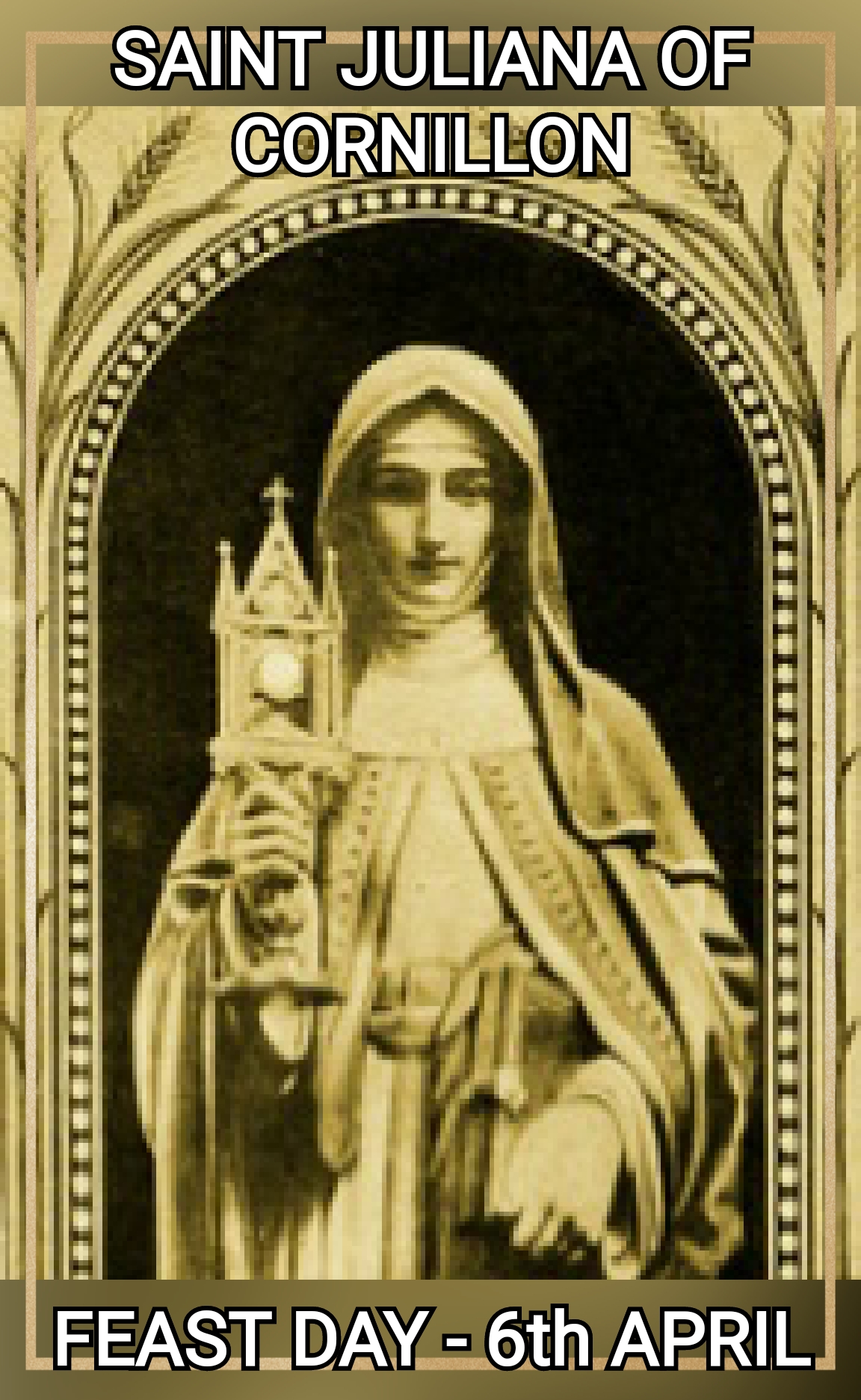 Juliana of Liège, was a medieval Norbertine canoness regular and mystic in what is now Belgium. Traditional scholarly sources have long recognized her as the promoter of the Feast of Corpus Christi, first celebrated in Liège in 1246, and later adopted for the Catholic Church in 1264.

Saint Juliana (1191/1192 – 1258) is little known but the Church is deeply indebted to her, not only because of the holiness of her life but also because, with her great fervour, she contributed to the institution of one of the most important solemn Liturgies of the year, Corpus Christi. St. Juliana de Cornillon, is also known as St. Juliana of Liège. Her biography is a collection of various testimonies of people who were directly acquainted with the Saint.

Juliana was born near Liège, Belgium between 1191 and 1192. It is important to emphasize this place because at that time the Diocese of Liège was, so to speak, a true “Eucharistic Upper Room”. Before Juliana, eminent theologians had illustrated the supreme value of the Sacrament of the Eucharist and, again in Liège, there were groups of women generously dedicated to Eucharistic worship and to fervent communion.

Guided by exemplary priests, they lived together, devoting themselves to prayer and to charitable works. Orphaned at the age of five, Juliana, together with her sister Agnes, was entrusted to the care of the Augustinian nuns at the convent and leprosarium of Mont-Cornillon. She was taught mainly by a sister called “Sapienza” [wisdom], who was in charge of her spiritual development to the time Juliana received the religious habit and thus became an Augustinian nun.

She became so learned that she could read the words of the Church Fathers, of St. Augustine and St. Bernard in particular, in Latin. In addition to a keen intelligence, Juliana showed a special propensity for contemplation from the outset. She had a profound sense of Christ’s presence, which she experienced by living the Sacrament of the Eucharist especially intensely and by pausing frequently to meditate upon Jesus’ words: “And lo, I am with you always, to the close of the age” (Mt 28:20).

When Juliana was 16 she had her first vision which recurred subsequently several times during her Eucharistic adoration. Her vision presented the moon in its full splendour, crossed diametrically by a dark stripe. The Lord made her understand the meaning of what had appeared to her.

The moon symbolized the life of the Church on earth, the opaque line, on the other hand, represented the absence of a liturgical feast for whose institution Juliana was asked to plead effectively: namely, a feast in which believers would be able to adore the Eucharist so as to increase in faith, to advance in the practice of the virtues and to make reparation for offences to the Most Holy Sacrament.

Juliana, who in the meantime had become Prioress of the convent, kept this revelation that had filled her heart with joy a secret for about 20 years. She then confided it to two other fervent adorers of the Eucharist, Blessed Eva, who lived as a hermit, and Isabella, who had joined her at the Monastery of Mont-Cornillon. The three women established a sort of “spiritual alliance” for the purpose of glorifying the Most Holy Sacrament. 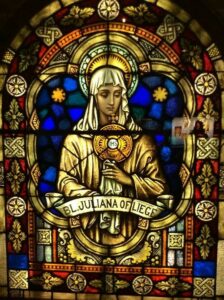 They also chose to involve a highly regarded Priest, John of Lausanne, who was a canon of the Church of St. Martin in Liège. They asked him to consult theologians and clerics on what was important to them. Their affirmative response was encouraging. What happened to Juliana of Cornillon occurs frequently in the lives of Saints.

To have confirmation that an inspiration comes from God it is always necessary to be immersed in prayer to wait patiently, to seek friendship and exchanges with other good souls and to submit all things to the judgement of the Pastors of the Church. It was in fact Bishop Robert Torote, Liège who, after initial hesitation, accepted the proposal of Juliana and her companions and first introduced the Solemnity of Corpus Christi in his diocese.

Later, other Bishops following his example instituted this Feast in the territories entrusted to their pastoral care. However, to increase their faith the Lord often asks Saints to sustain trials. This also happened to Juliana who had to bear the harsh opposition of certain members of the clergy and even of the superior on whom her monastery depended. Of her own free will, therefore, Juliana left the Convent along with her companions.

For ten years, from 1248 to 1258, she stayed as a guest at various monasteries of Cistercian sisters. She edified all with her humility, had no reproach for her adversaries and continued to spread Eucharistic worship zealously. She died at Fosses-La-Ville, Belgium, in 1258. In the cell where she lay the Blessed Sacrament was exposed and Juliana died contemplating with a last effusion to love Jesus in the Eucharist whom she had always loved, honoured and adored.

Jacques Pantaléon of Troyes was also won over to the good cause of the Feast of Corpus Christi during his ministry as Archdeacon in Lièges. It was he who, having become Pope with the name of Urban IV in 1264, instituted the Solemnity of Corpus Christi on the Thursday after Trinity/Pentecost Sunday, as a feast of precept for the Universal Church.

Pope Urban IV issued the papal bull Transiturus in which the Feast of Corpus Christi, i.e., the feast of the Body of Christ was declared a feast throughout the entire Latin Rite. This was the very first papally sanctioned universal feast in the history of the Latin Rite. In the liturgical reforms of 1969, under Pope Paul VI, the bishops of every nation have the option to transfer it to the following Sunday.

Juliana was canonized in 1869 by Pope Pius IX and further celebrated by Pope John Paul II, who wrote a letter mentioning her on the 750th anniversary of the Feast of Corpus Christi. Her feast day is the 6 April. Her patronage is devotion to the Blessed Sacrament. 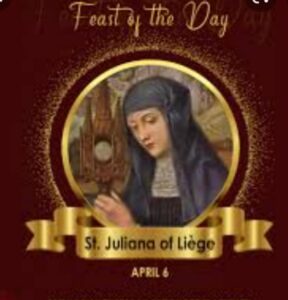 Glorious St. Juliana, by your deep love for Jesus Christ, our Eucharistic King, you spent countless hours worshiping before the Blessed Sacrament and established a world wide feast to honor this most holy of mysteries.

By your prayers and example may we too develop a deep appreciation, joy and heartfelt longing to spend time adoring Jesus Christ, our Lord, hidden and veiled in the little form of heavenly bread. Amen 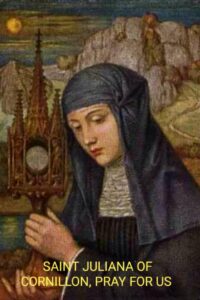