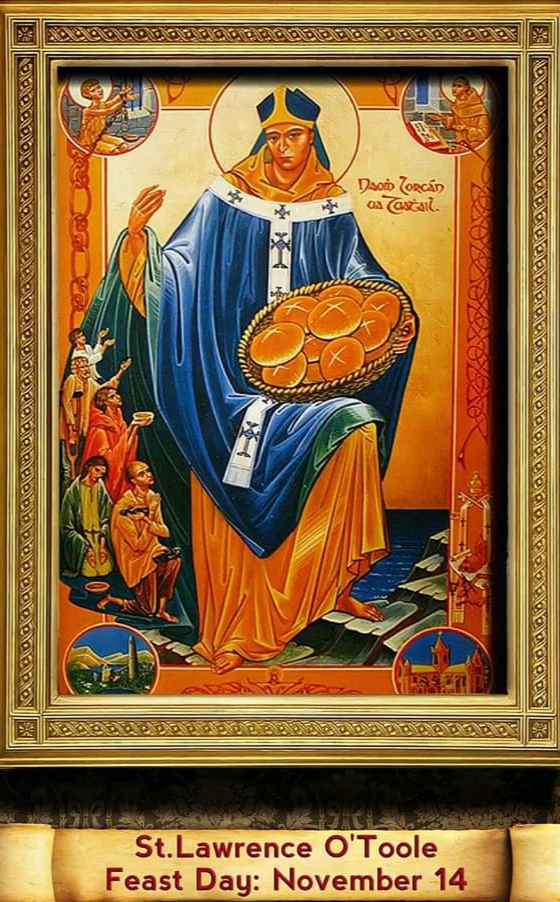 St. Lawrence O’Toole was born around 1128 in County Kildare, Ireland. His father was the chief of Hy Murray, and his mother one of the Clan O’Byrne. At the age of 10, Lawrence was given up as a hostage to King Mac Murehad of Leinster, who treated him with hostility, harshness and inhumanity, with no proper food or clothing or place to stay. Knowing this, his father asked the King to release him, and he gratefully brought him home.

The chief wanted one of his sons to enter the service of the Church. While he was wondering which one it might be, Lawrence told him with a laugh that he need not wonder anymore, since it was his desire to have for his inheritance, the service of God in the Church. So his father took him by the hand and gave him into the care of the bishop.

Lawrence became a priest and the abbot of a great monastery. Once food became very scarce in the whole neighborhood of the monastery. The good abbot gave great quantities away to keep the people from starving. He had many problems to handle as head of the monastery. But Lawrence kept right on, guiding the community in the way of self-sacrifice, despite the criticism. There was nothing that discouraged the fearless Lawrence O’Toole.

Lawrence was only 25 when he was elected Abbot, proving to be the greatest Abbot of Glendalough since St Kevin its founder. Apart from encouraging learning, he built new churches and renewed -monastic life by preparing the liturgy and bringing in monks from the continent. He was unfailing in his care for the poor, especially homeless children, and sold the monastery treasures to feed famine victims.

He became so famous that before long he was chosen to be archbishop of Dublin. In this new position, he lived as holy a life as ever. Every day, he invited many poor people to be his guests. He helped many others too. Once a madman attacked him as he was going up to the altar to say Mass. He was knocked to the floor unconscious. Yet he came to his senses right away. He had the wound washed at once, and then went right ahead with the Mass.

After years of labor for the Church, St. Lawrence O’Toole became very ill. When he was asked if he wanted to make a will, the holy archbishop smiled. He answered, “God knows that I don’t have a penny in the world.” He had long ago given everything he had to others, just as he had given himself completely to God.

In his later years he travelled widely and visited England often, to bring peace between the two countries. Travel by sea was dangerous and challenging but all those on board believed that with Lawrence’s powerful prayers they could combat and weather all storms and arrive to shore safely. St. Lawrence was most widely known for his faithful devotion, charity, and prudence, and was highly respected as a negotiator. He finally took ill and died on November 14, 1180. He was proclaimed a saint by Pope Honorius III in 1225.

Saint Lawrence O’Toole, man of peace, you were in the middle of family and political conflict from your earliest days. Give the gift of peace and hope to all who experience the trauma of division in families, in communities and among nations.

St. Lawrence O’Toole, man of prayer, you recognized the call to serve God in a particular way at Glendalough. Give the gift of perseverance to all who are discerning their Christian vocation.

St. Lawrence O’Toole, man of faith, you had the openness to accept a position of leadership in your community at an early age. Bless our young people with a spirit of generosity to offer themselves in the service of the Gospel.

St. Lawrence O’Toole, man of prayer, you inspired people by your commitment to the spiritual life and the recitation of the Prayer of the Church. Fill us with that desire to pray in communion with each other throughout each day.

St. Lawrence O’Toole, man of faith, you opened your heart and your doors to those who were poor. Increase our awareness of those in need and inspire us to act with justice and charity at all times.

St. Laurence O’Toole, man of prayer, you were respected for your commitment to your Church and to your country. Grant us the grace to live in this world while always reflecting the eternal values of the kingdom.

St. Laurence O’Toole, man of peace, you gave your last ounce of energy in the cause of peace. Give us the gift of tirelessness as we try to live as instruments of Christ’s peace, love and tolerance. Amen 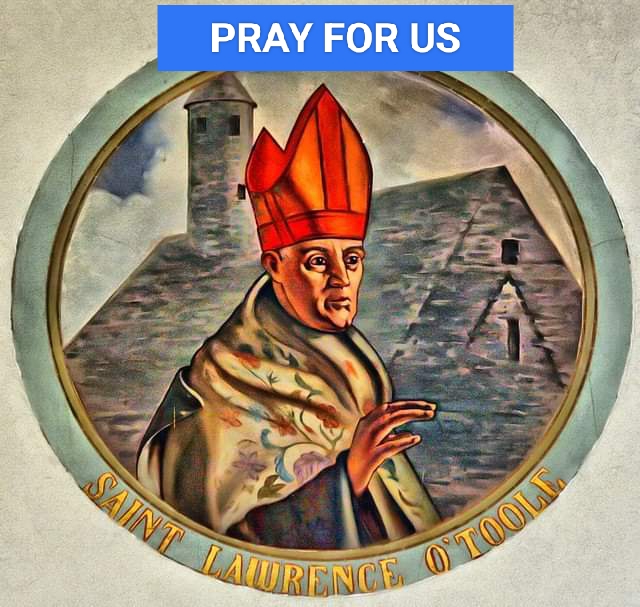