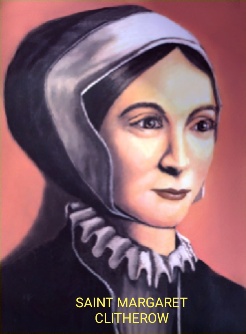 Margaret was born in 1555 in England. She was raised as a Protestant, a member of the Church of England, but after her marriage to John Clitherow, she made the decision to become Catholic. It was a brave decision, because Margaret lived during the reign of Queen Elizabeth I, who wanted to rid England of all Catholics and the practice of the Catholic faith.

Margaret’s husband did not become Catholic, but he supported her decision. John even paid the fines Margaret was charged for not attending Protestant services in their local church. Margaret had two hiding places built in their home. One was a small room, large enough for several priests to hide from the authorities looking to arrest any members of the clergy.

The other secret place was a small cupboard. In it she kept the sacred vessels, including a chalice and paten and vestments—anything a priest would need to celebrate the Eucharist. Catholics came secretly to Margaret’s house for celebrations of the Mass and for the reception of the other Sacraments. Margaret and John’s three children were baptized there as infants.

The home was searched often because the authorities suspected that Margaret was breaking the laws against Catholics. Margaret made plans to send her oldest son to France so that he could receive a Catholic education. This, too, was a crime. Someone reported Margaret, and she was arrested in 1586 for harboring priests. She was found guilty and sentenced to death at the age of 30.

Margaret was executed by being crushed to death on Good Friday in 1586. The two sergeants hired to kill her used four beggars to do the deed instead. It took her 15 minutes to die as she was crushed with rocks and stones. Her last words were “Jesu! Jesu! Jesu! have mercy on me!” Her body was left for six hours until the weight was removed.

Her hand was saved following her death and is now a relic in the chapel of the Bar Convent in York. Margaret’s great faith was an inspiration to all three of her children. Her daughter, Anne, became a nun, and her two sons, Henry and William, both became priests. In 1970 Pope Paul VI canonized her as a saint for her courage and faith. She is referred to as the “Pearl of York”. 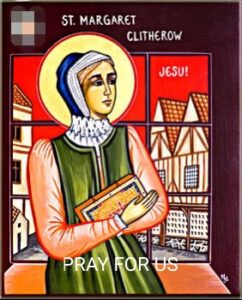 St. Margaret Clitherow, help us to be like you. Help us to love and protect each other in everything we do. May we not lack courage to profess our faith in Jesus Christ our Lord. Amen