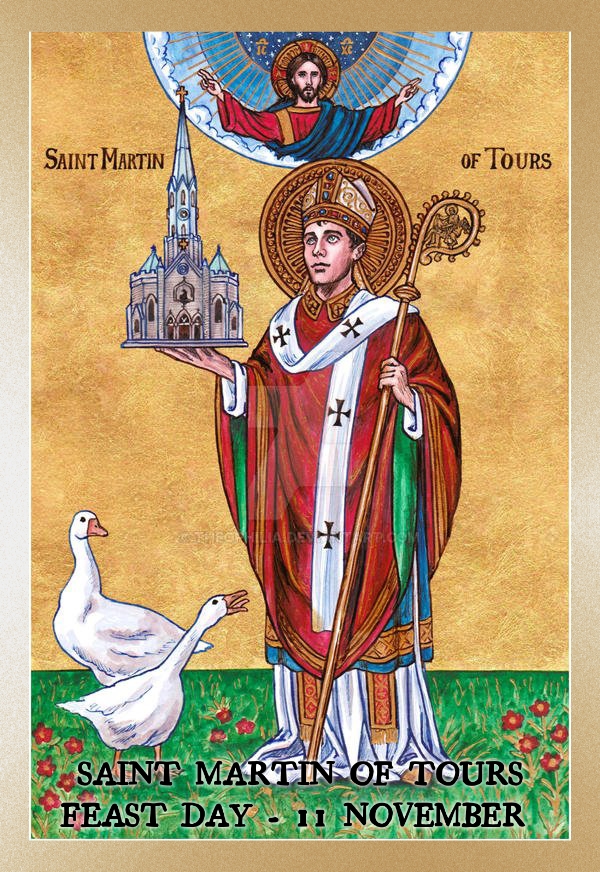 Saint Martin of Tours was born in Savaria, Pannonia in around 316 AD in a region which is today called Hungary. Martin grew up in Ticinum, in Northern Italy, where his father was assigned the post of a Tribune. Just before Martin was born, Christianity was legalized in the Roman Empire and though it was not the official religion of the State, it could be practiced openly without persecution. It was during this period that Martin, though he had pagan parents, responded to the call of the Gospel, becoming a Christian at age 10.

At fifteen, Martin was required to follow his father into the cavalry corps of the Roman military. As a young soldier, Martin encountered a beggar in Amiens, who had no clothes to keep him warm, in the very cold weather. Martin cut his cloak in half with his sword, giving half to the destitute and using the other half for himself. It is said that he kept half of the cloak for himself, because he had already parted with other garments as a deed of charity and the cloak was all that he had left. There were some onlookers who mocked him for being dressed in only half of his cloak, while others felt shame as they had ample clothes which they could have parted with, but didn’t.

On that very night, Martin had a vision in which Christ appeared to him, and said, “Martin, a mere catechumen has clothed me with his robe.” This was so true, as Jesus, when on earth, had said, ‘Whatever you do to one of the least of these, that you do unto me’. Martin was exemplary, and through this small act, he portrayed the importance of dignity and equality, by treating the beggar as an equal, sharing his cloak with him.

During the Middle Ages, the supposed relic of St. Martin’s miraculous cloak, (cappa Sancti Martini) was carried by the king even into battle, and used as a holy relic upon which oaths were sworn. Martin was deeply dedicated to the long process of instruction in the Christian faith. After his discharge from military service in 356, Martin became a disciple of St. Hilary of Poitiers. In 360–61, he founded a monastery at Ligugé, which was the first established monastery in Gaul. Martin was made Bishop of Tours in 372 and died on a pastoral visit to Candes on November 8, 397.

He was buried in Tours, on November 11, and his tomb is a major place of pilgrimage. St. Martin’s Day (Martinstag) is a religious observance on November 11th, in Germany, that is particularly popular with children, dedicated to St. Martin of Tours celebrating modesty and altruism – both values commonly associated with the Saint. November 10 was usually the end of the working year for peasants from northern Italy. Their landlord and employer either renewed the deal for the year to come, or he they were left homeless and without work and had to go and find another landlord somewhere else. Today people who rent a flat/house are supposed to change it on that day like their ancestors did.

Martin is the first non-martyr to be venerated as a saint. He is maybe the only saint whose day has a specific name in English: Martinmas. Martin is heralded as the patron of the Third Republic, and also against poverty, alcoholism and is patron saint of many communities and organizations across Europe.

Blessed St. Martin of Tours, you, who full of love and generosity when you saw the beggar that was freezing from cold, without knowing that in truth he was Christ, did not doubt to give him half of your cape, and did not give it completely to him since the other half belonged to the Roman army; you, who did not seek recognition but only to favor your neighbor, found glory before the Lord.

And when the Savior appeared to you dressed with the half-cape so as to express appreciation for your gesture and He told you “today you covered me with your mantle”, you decided to no longer serve the army and to dedicate your life to God and to the salvation of souls, being from then on a propagator of the faith and a holy man totally dedicated to whomever was in need.

Glorious Saint Martin, you who worked miracles and prodigies, who with joy, amiability and the most exquisite goodness won over the hearts of all and did not cease to ever work for their well being: give me your hand and help me to come out of all lack and scarcity which today afflicts me and weighs me down. Glorious Saint Martin, I humbly ask you with great faith that you attain from God, the fount of all Mercies that my ways on this earth, my work and toils be cleansed and opened with clarity.

In the name of our Omnipotent God, Saint Martin of Tours, remove all that harms me and give me work and prosperity. Amen. 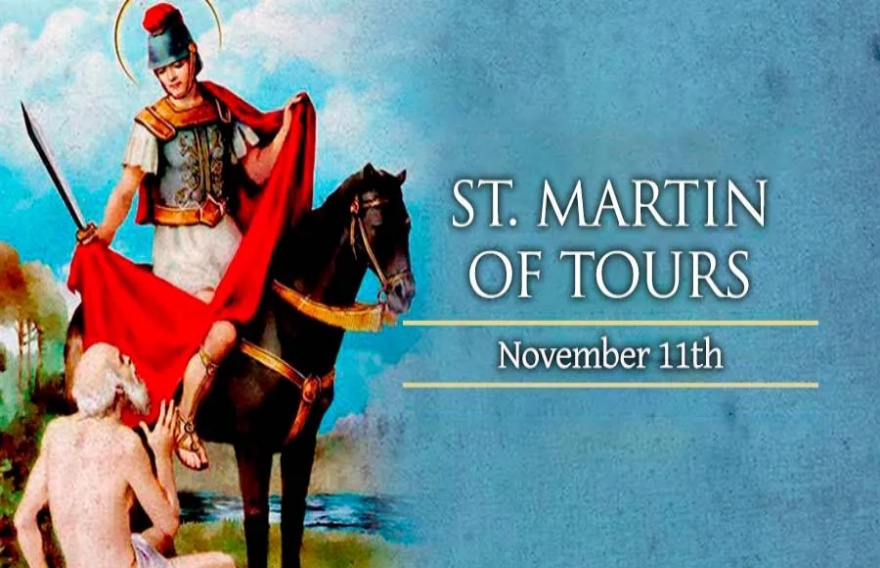