FEAST OF SAINT PANCRAS OF ROME, MARTYR – 12th MAY 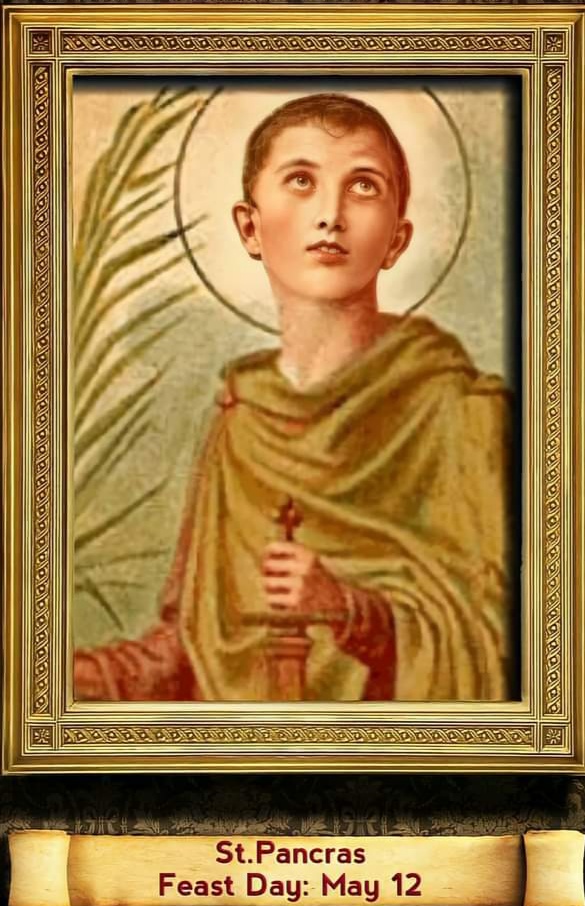 Pancras was a Roman citizen who converted to Christianity, and was beheaded for his faith at the age of fourteen, around the year 304.
From an early stage, Pancras was venerated together with Nereus and Achilleus in a shared feast day and Mass formula on 12 May. In 1595, 25 years after Pope Pius V promulgated the Tridentine Missal, Domitilla was added.

Since 1969, Pancras has been venerated separately, still on 12 May. He is, traditionally, the second of the Ice Saints. In the Syriac traditions he is known as Mor Izozoel (Mar Azazael) remembered on 12 May and 12 August. He is the saint of children.

Because he was said to have been martyred at the age of fourteen during the persecution under Diocletian, Pancras would have been born around 289, at a place designated as near Synnada, a city of Phrygia Salutaris, to parents of Roman citizenship.

His mother Cyriada died during childbirth, while his father Cleonius died when Pancras was eight years old. Pancras was entrusted to his uncle Dionysius’ care. They moved to Rome, to a villa on the Caelian Hill. They converted to Christianity, and Pancras became a zealous adherent of the faith.

During the persecution of Christians by Emperor Diocletian, around 303 AD, he was brought before the authorities and asked to perform a sacrifice to the Roman gods. Diocletian, impressed with the boy’s determination to resist, promised him wealth and power, but Pancras refused. The emperor ordered him to be beheaded on the Via Aurelia, on 12 May 303 AD.

This traditional year of his martyrdom cannot be squared with the saint’s defiance of Diocletian in Rome, which the emperor had not visited since 286, nor with the mention of Cornelius (251–253) as Bishop of Rome at the time of the martyrdom, as the most recent monograph on Pancras’ texts and cult has pointed out.

A Roman matron named Ottavilla recovered Pancras’ body, covered it with balsam, wrapped it in precious linens, and buried it in a newly built sepulchre dug in the Catacombs of Rome. Pancras’ head was placed in the reliquary that still exists today in the Basilica of Saint Pancras. 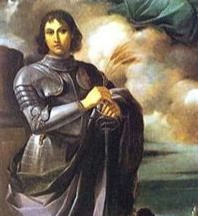 Devotion to Pancras definitely existed from the fifth century onwards, for the basilica of Saint Pancras was built by Pope Symmachus (498–514), on the place where the body of the young martyr had been buried; his earliest passio seems to have been written during this time.

Pope Gregory the Great gave impetus to the cult of Pancras, sending Augustine to England carrying relics of that saint and including his legend in Liber in gloria martyrum (for this reason, many English churches are dedicated to Pancras; St Pancras Old Church in London is one of the oldest sites of Christian worship in England).

In medieval iconography, Pancras was depicted as a young soldier, due to his association with the paired soldier saints Nereus and Achilleus. It is said that Pancras’ martyrdom took place in the arena among wild beasts, where the panther refrained from attacking and killing him until the martyr gave the beast permission.

Pancras is popularly venerated as the patron saint of children, jobs and health. His name is also invoked against cramps, false witnesses, headaches and perjury. His image in statue form can be found in many bars, restaurants and other businesses. He is also the patron saint of the Italian city San Pancrazio Salentino.

In the present General Roman Calendar, revised in 1969, Saints Nereus and Achilleus (together) and Saint Pancras have distinct celebrations (optional memorials) on 12 May. Saint Domitilla is not included in the revised calendar, because the liturgical honours once paid to her “have no basis in tradition”.

In the late 500’s, Pope Saint Gregory the Great appointed monks to staff a small church in Rome, already almost three hundred years old, which was dedicated to Saint Pancras. In 597 the same Pope Gregory sent Saint Augustine of Canterbury on a missionary journey to England, and Augustine copied his Roman mentor and established a church in honor of Saint Pancras.

About sixty years after Augustine, a different pope sent relics of Saint Pancras to England. This further spread devotion to this boy martyr, until a total of six ancient churches were dedicated to Saint Pancras in England alone, including the oldest church still used for Christian worship in that old country.

Moments of great danger for the Church are also moments of great grace. In her long history, the Church has passed through, and continues to live, many such dangerous, grace-filled times. Saint Pancras’ times were precisely such. If he had stayed in his native land, he would likely have died of natural causes.

But he went in search of something, perhaps wealth, fame, or family, in Rome, the big city, just as so many people search for the same in big cities today. But young Pancras found what he probably wasn’t looking for—God. And his decision to become a Christian, quickly took a very serious turn.

He was threatened with death if he did not burn incense to a false god. The boy stood fast. Like other more famous young martyrs, such as Saint Agnes, the idealism of youth provoked both admiration and fury in his persecutors, and he was taken beyond the walls of Rome to be decapitated.

Saint Pancras of Rome, you gave away your young life rather than offer worship to false deities. May your example edify, and your intercession strengthen, all young people to put love of God above all else.

Pray for us that we will remain firm in our faith and a worthy example to others. Amen 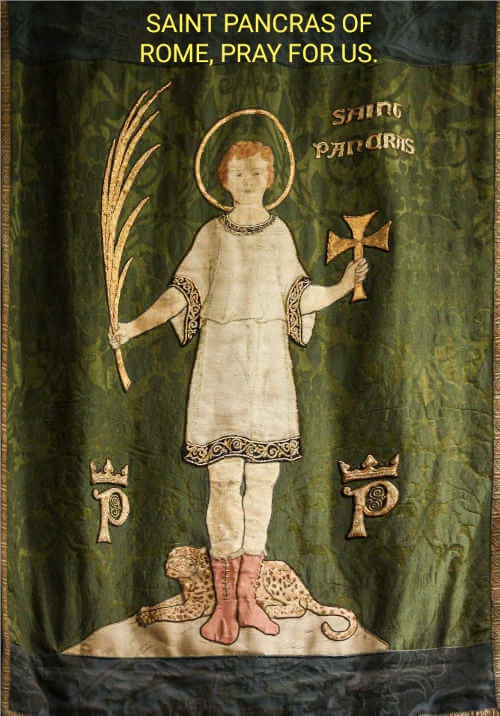