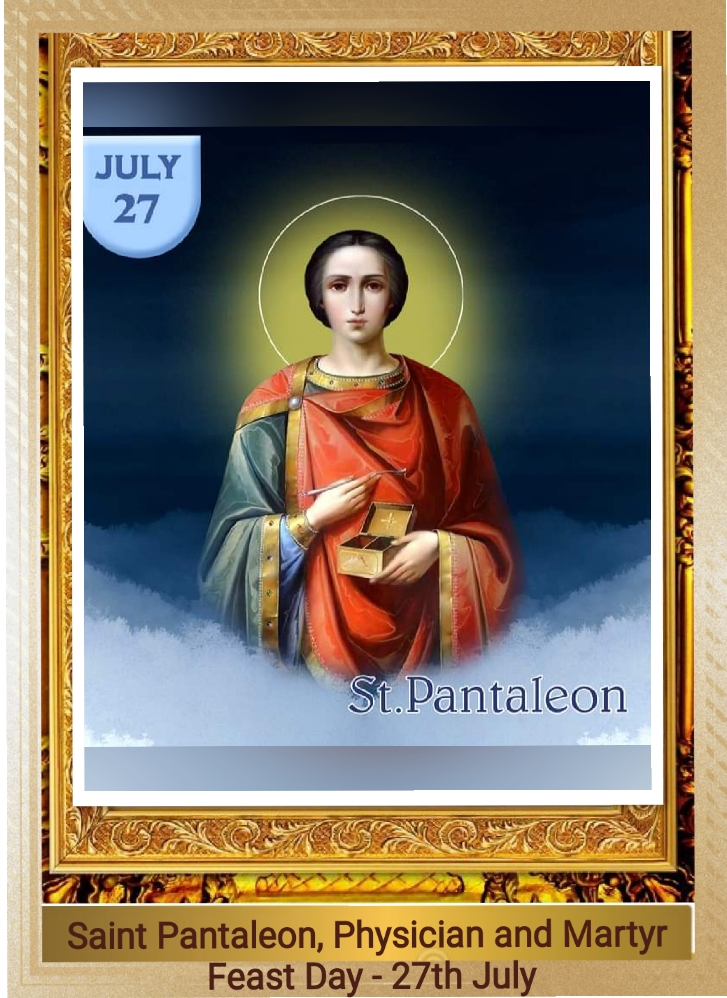 Saint Pantaleon (Greek: Παντελεήμων, Russian: Пантелеи́мон, romanized: Panteleímon; “all-compassionate”), counted in the West among the late-medieval Fourteen Holy Helpers and in the East as one of the Holy Unmercenary Healers, was a martyr of Nicomedia in Bithynia during the Diocletianic Persecution of 305 AD.

According to the martyrologies, Pantaleon was the son of a rich pagan, Eustorgius of Nicomedia, and had been instructed in Christianity by his Christian mother, Saint Eubula; however, after her death he fell away from the Christian church, while he studied medicine with a renowned physician Euphrosinos; under the patronage of Euphrosinos he became physician to the emperor, Galerius.

He was won back to Christianity by Saint Hermolaus (characterized as a bishop of the church at Nicomedia in the later literature), who convinced him that Christ was the better physician, signalling the significance of the exemplum of Pantaleon that faith is to be trusted over medical advice.

“He studied medicine with such success, that the Emperor Maximian appointed him his physician. One day as our saint was discoursing with a holy priest named Hermolaus, the latter, after praising the study of medicine, concluded thus: “But, my friend, of what use are all thy acquirements in this art, since thou art ignorant of the science of salvation?”

By miraculously healing a blind man by invoking the name of Jesus over him, Pantaleon converted his father, upon whose death he came into possession of a large fortune. He freed his slaves and, distributing his wealth among the poor, developed a great reputation in Nicomedia. Envious colleagues denounced him to the emperor during the Diocletian persecution. 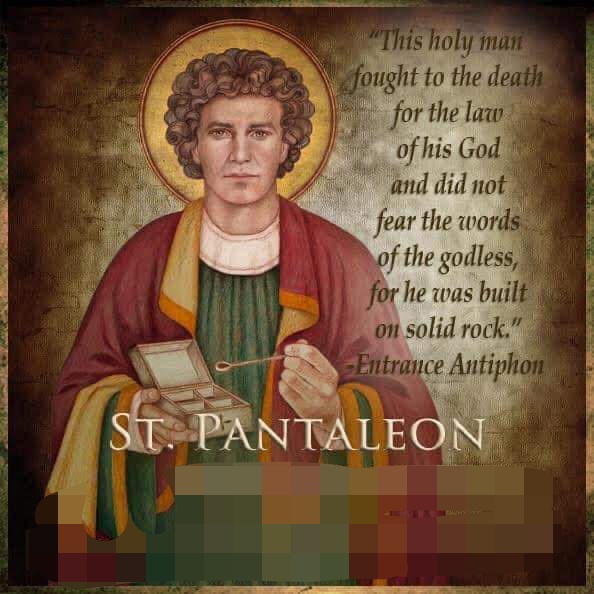 The emperor wished to save him and sought to persuade him to apostasy. Pantaleon, however, openly confessed his faith, and as proof that Christ was the true God, he healed a paralytic. Notwithstanding this, he was condemned to death by the emperor, who regarded the miracle as an exhibition of magic.

According to the legend, Pantaleon’s flesh was first burned with torches, whereupon Christ appeared to all in the form of Hermolaus to strengthen and heal Pantaleon. The torches were extinguished. Then a bath of molten lead was prepared; when the apparition of Christ stepped into the cauldron with him, the fire went out and the lead became cold.

Pantaleon was now thrown into the sea, loaded with a great stone, which floated. He was thrown to wild beasts, but these fawned upon him and could not be forced away until he had blessed them. He was bound on the wheel, but the ropes snapped, and the wheel broke. An attempt was made to behead him, but the sword bent, and the executioners were converted to Christianity.

Pantaleon implored Heaven to forgive them, for which reason he also received the name of Panteleimon (“mercy for everyone” or “all-compassionate”). It was not until he himself desired it that it was possible to behead him, upon which there issued forth blood and a white liquid like milk.

“At Ravello, a city in the kingdom of Naples, there is a vial of his blood, which becomes blood every year [on his feast day], and may be seen in this state interspersed with the milk, as I, the author of this work, have seen it.” 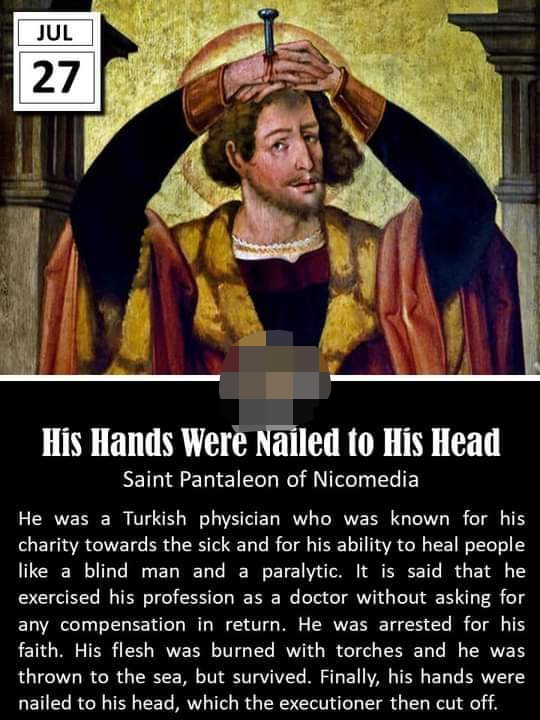 The vitae containing these miraculous features are all late in date and “valueless” according to the Catholic Encyclopedia. Yet the fact of his martyrdom itself seems to be supported by a veneration for which there is testimony in the 5th century, among others in a sermon on the martyrs by Theodoret (died c. 457); Procopius of Caesarea (died c. 565?), writing on the churches and shrines constructed by Justinian I tells that the emperor rebuilt the shrine to Pantaleon at Nicomedia; and there is mention of Pantaleon in the Martyrologium Hieronymianum.

The Eastern tradition concerning Pantaleon follows more or less the medieval Western hagiography, but lacks any mention of a visible apparition of Christ. It states instead that Hermolaus was still alive while Pantaleon’s torture was under way, but was martyred himself only shortly before Pantaleon’s beheading along with two companions, Hermippas and Thermocrates. The saint is canonically depicted as a beardless young man with a full head of curly hair.

According to Movses Kaghankatvatsi, his relics were brought to church built in the town of Tsri (then Caucasian Albania, near modern Barda, Azerbaijan) by St. Grigoris. Catholicos Lazar of Albania built Church of St. Pantaleon in his honor in Beghame’j (near modern Ağcabədi, Azerbaijan). King Vachagan III of Albania rediscovered his remains and interred them in the Amaras Monastery, located in modern Nagorno Karabakh and named his firstborn son after the saint.

After the Black Death of the mid-14th century in Western Europe, as a patron saint of physicians and midwives, he came to be regarded as one of the fourteen guardian martyrs, the Fourteen Holy Helpers. Relics of the saint are found at Saint Denis at Paris; his head is venerated at Lyon. A Romanesque church was dedicated to him in Cologne in the 9th century at the latest.

Almighty and eternal God! With lively faith and reverently worshiping Thy divine Majesty, I prostrate myself before Thee and invoke with filial trust Thy supreme bounty and mercy.

Illumine the darkness of my intellect with a ray of Thy heavenly light and inflame my heart with the fire of Thy divine love, that I may contemplate the great virtues and merits of the saint in whose honor I make this prayer, and following his example imitate, like him, the life of Thy divine Son.

St. Pantaleon who during your life had great pity for the sick and with the help of God often relieved and cured them, I invoke your intercession with God, that I may obtain the grace to serve Him in good health by cheerfully fulfilling the duties of my state of life. 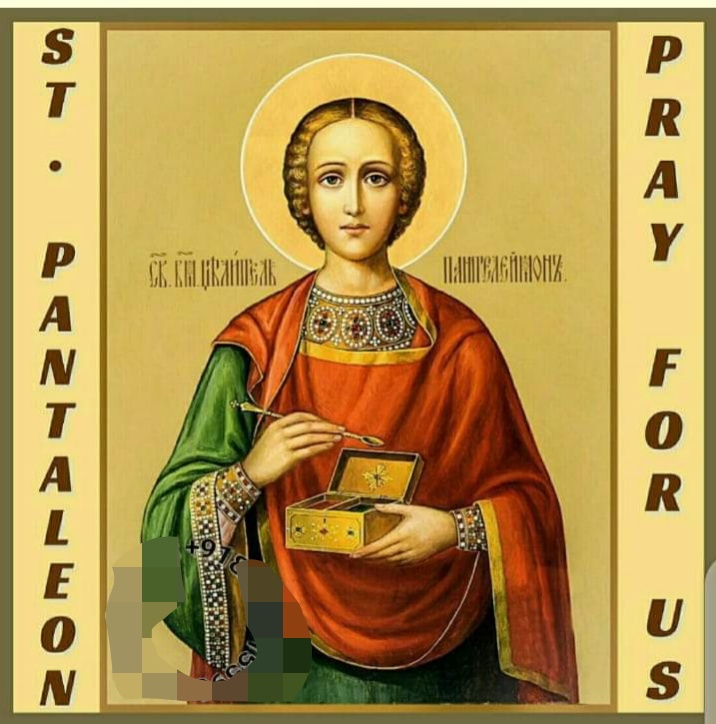 Saint Pantaleon, pray for us.