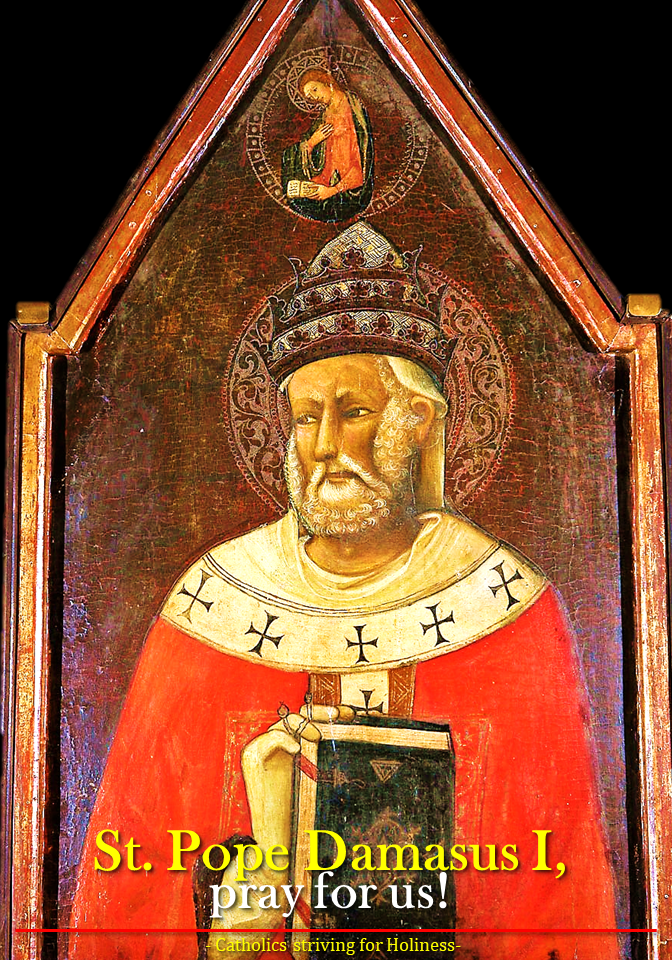 St. Damasus I, (born c. 304, Rome—died December 11, 384, Rome; feast day December 11), was Pope from October 1, 366, to December 11, 384. He was a deacon during the reign of his predecessor, Pope Liberius, and accompanied him when Liberius was exiled by the Roman emperor Constantius for his opposition to Arianism, a belief that denied Christ’s divinity. Later, however, Damasus returned to Rome and acknowledged Antipope Felix II, a pro-Arian placed on the papal throne by the emperor.

After Felix’ death (November 22, 365), Damasus became reconciled with Liberius, but the enemies he made during this period of shifting allegiance troubled his entire pontificate. The election of Damasus as pope was immediately challenged by a minority who supported a rival claimant, Ursinus. The civil authority sided with Damasus, and Ursinus and his partisans were banished.

Damasus was active in containing heresy and promoting the primacy of Rome. In two synods (368 and 369) the unorthodox teachings of Bishop Macedonius of Constantinople and of Bishop Apollinaris (the Younger) of Laodicea were condemned. With a view to the elimination of Arianism in the East, he entered into negotiations with St. Basil, who, as bishop of Caesarea, was head of the church throughout most of Anatolia (Turkey). They failed to agree on policies.

Damasus was the first pope to refer to Rome as the apostolic see, to distinguish it as that established by the apostle St. Peter, founder of the church. In 380 the emperors Gratian in the West and Theodosius in the East declared Christianity as preached by Peter to be the religion of the Roman Empire and defined orthodoxy as the doctrines proclaimed by the bishops of Rome and Alexandria.

Rome’s primacy was officially pronounced by a synod called in Rome in 382 by Damasus, who was wary of the growing strength of Constantinople, which was already claiming to be the New Rome. St. Jerome (c. 342–420) attended the synod and stayed on to become Damasus’ secretary, adviser, and friend. Damasus commissioned him to revise the Latin translations of the Bible for what subsequently became known as the Vulgate.

Latin was introduced as the language of the mass during Damasus’ long pontificate. He was notable also for his work in discovering the tombs of martyrs, for which he wrote many verse inscriptions, and was responsible for the restoration of Rome’s catacombs. Damasus was an active builder and restorer of churches.

As pope, his lifestyle was simple in contrast to other ecclesiastics of Rome, and he was fierce in his denunciation of Arianism and heresies. During his pontificate, Christianity was declared the official religion of the Roman state, and Latin became the principal liturgical language as part of the pope’s reforms. His encouragement of Saint Jerome’s biblical studies led to the Vulgate, the Latin translation of Scripture which 12 centuries later the Council of Trent declared as authentic in readings, disputations, preaching.

In a troubled and pivotal period of Church history, Damasus stands forth as a zealous defender of the faith who knew when to be progressive and when to entrench. Damasus had two qualities of good leadership. Alertness to the promptings of the Spirit, and service. His struggles are a reminder that Jesus never promised his Rock protection from hurricane winds nor his followers immunity from difficulties. His only guarantee is final victory.

Saint Damasus, you had within you a positivity to regard the quality of a Christian life as focal, in the short term of life on earth, and you took God’s view and looked to the things that last. You were a dedicated propagater of the faith and discerned the promptings of the Holy Spirit with piety and wisdom.

Pray for us, that we may be blessed with true purpose of spreading God’s Word with love and humility and look beyond immediate popularity and fleeting favors, choosing to do the things that God has designed for us to do. Pray that we may live fruitful, Christlike lives. Amen 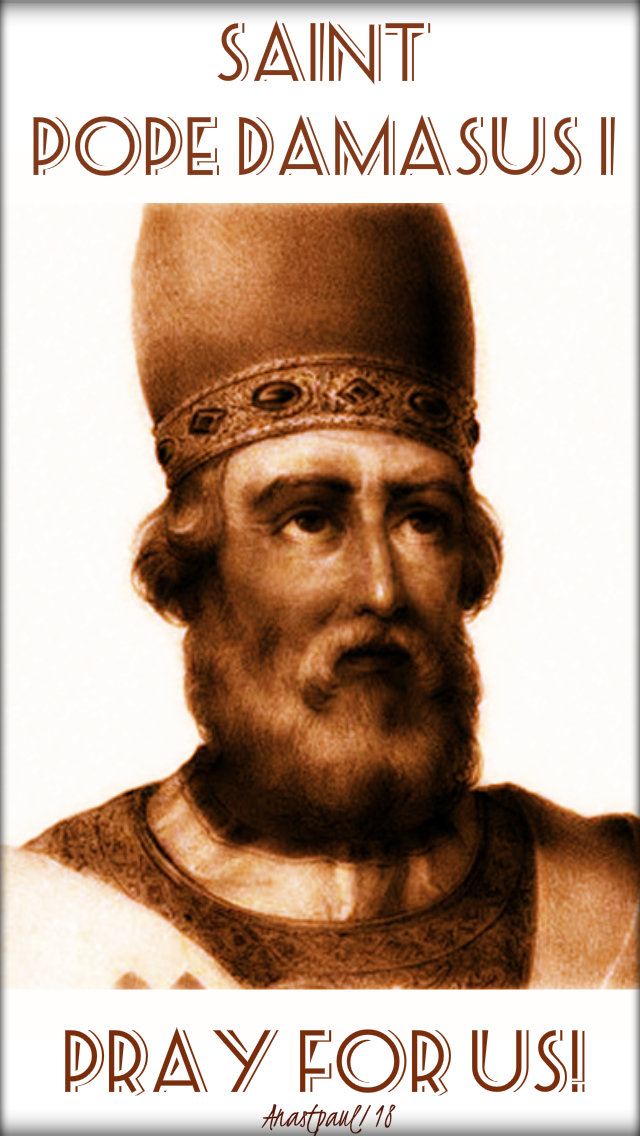