FEAST OF SAINT POPE JOHN I, MARTYR – 18th MAY 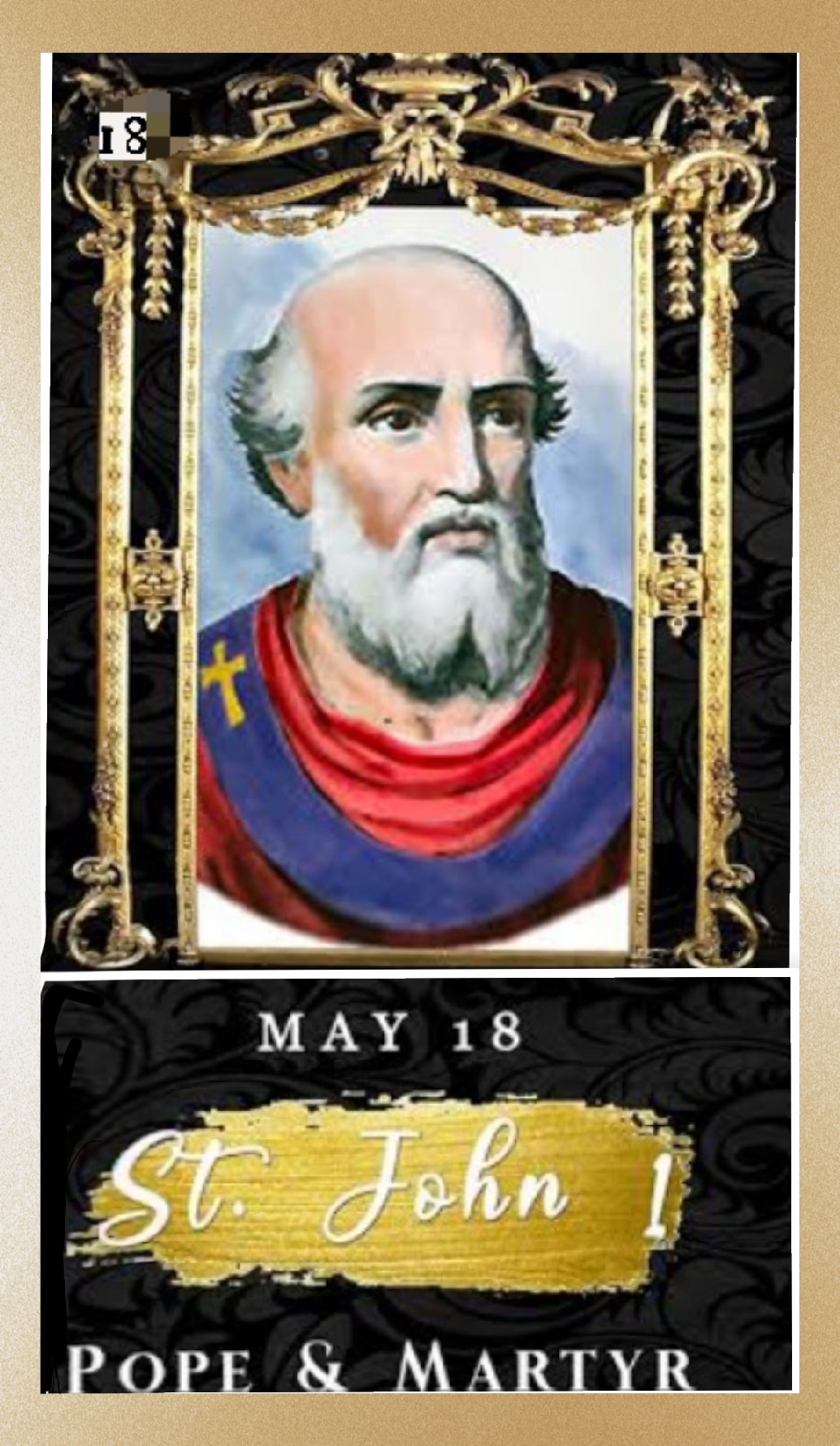 Pope John I (died 18 May 526) was the bishop of Rome from 13 August 523 to his death. He was a native of Siena in Italy. He was sent on a diplomatic mission to Constantinople by the Ostrogoth King Theoderic to negotiate better treatment for Arians. Although John was relatively successful, upon his return to Ravenna, Theoderic had him imprisoned for allegedly conspiring with Constantinople. The frail pope died of neglect and ill-treatment.

While a deacon in Rome, John is known to have been a partisan of the Antipope Laurentius, for in a libellus written to Pope Symmachus in 506, John confessed his error in opposing him, condemned Peter of Altinum and Laurentius, and begged pardon of Symmachus. He would then be the “Deacon John” who signed the acta (ecclesiastic publication) of the Roman synod of 499 and 502.

The fact the Roman church only had seven deacons at the time makes identifying him with this person very likely. He may also be the “Deacon John” to whom Boethius, the 6th-Century philosopher, dedicated three of his five religious tractates, or treatises, written between 512 and 520.

John was very frail when he was elected to the papacy. Despite his protests, Pope John was sent by Theodoric the Great, the Arian king of the Ostrogoths in Italy, to Constantinople to secure the moderation of a decree, issued in 523, of Justin I, emperor of the Eastern Roman Empire, against the Arians. the king threatened that if John failed in his mission, there would be reprisals against non-Arian Christians in the West.

John proceeded to Constantinople with a considerable entourage: including his fellow bishops Ecclesius of Ravenna, Eusebius of Fanum Fortunae, and Sabinus of Campania. His secular companions were the senators Flavius Theodorus, Inportunus, and the Patrician Agapitus. Emperor Justin is recorded as receiving John honorably. He promised almost everything the embassy asked of him.

With the exception that those converting from Arianism to Catholicism would not be allowed to retain their place in the Catholic hierarchy as deacons, priests, or bishops. Although John was successful in his mission, when he returned to Ravenna, Theoderic’s capital in Italy, Theoderic had John arrested on the suspicion of having conspired with Emperor Justin.

John had been elected Pope while he was still an archdeacon upon the death of Pope Hormisdas in 523. At that time, Theodoric the Goth subscribed to the Arian brand of Christianity, but had tolerated and even favored his Catholic subjects during the early part of his reign.

However, about the time of St. John’s accession to the Papacy, Theodoric’s policy underwent a drastic change as a result of two events: the treasonable (in the sovereign’s view) correspondence between ranking members of the Roman Senate and Constantinople and the severe edict against heretics enacted by the emperor Justin I, who was the first Catholic on the Byzantine throne in fifty years.

Spurred on by the appeals of Eastern Arians, Theodoric threatened to wage war against Justin but ultimately decided to negotiate with him through a delegation of five Bishops and four senators. At its head he named Pope John – much against the latter’s wishes. Little is known for certain about the nature of the message which the Pope bore and the manner in which he carried out his mission.

What is known is that he succeeded in persuading the Emperor to mitigate his treatment of the Arians and thus avoid reprisals against the Catholics in Italy. The Pope’s visit also brought about the reconciliation of the Western and Eastern Churches which had been plagued by a schism since 482 when Zeno’s Henoticon had been published.

However, Theodoric had been becoming more suspicious with each passing day. While waiting for the delegation to return, he ordered the execution of the philosopher Boethius and his father-in-law Symmachus on a charge of treason; and as he got word of the friendly relations between the Pope and the emperor, he concluded that they were plotting against him.

John was imprisoned at Ravenna, where he died of neglect and ill treatment. His body was transported to Rome and buried in the Basilica of St. Peter. The Liber Pontificalis credits John with making repairs to the cemetery of the martyrs Nereus and Achilleus on the Via Ardeatina, that of Felix and Adauctus, and the cemetery of Priscilla.

Pope John I is depicted in art as looking through the bars of a prison or imprisoned with a deacon and a subdeacon. He is credited with ending the Acacian Schism (484–519), thus reuniting the Eastern and Western churches by restoring peace between the papacy and the Byzantine emperor Justin I. He is venerated at Ravenna and in Tuscany. His feast day is 18 May, the anniversary of the day of his death.

O God, who reward faithful souls and who have consecrated this day by the martyrdom of Pope Saint John the First, graciously hear the prayers of your people and grant that we, who venerate his merits, may imitate his constancy in the faith. 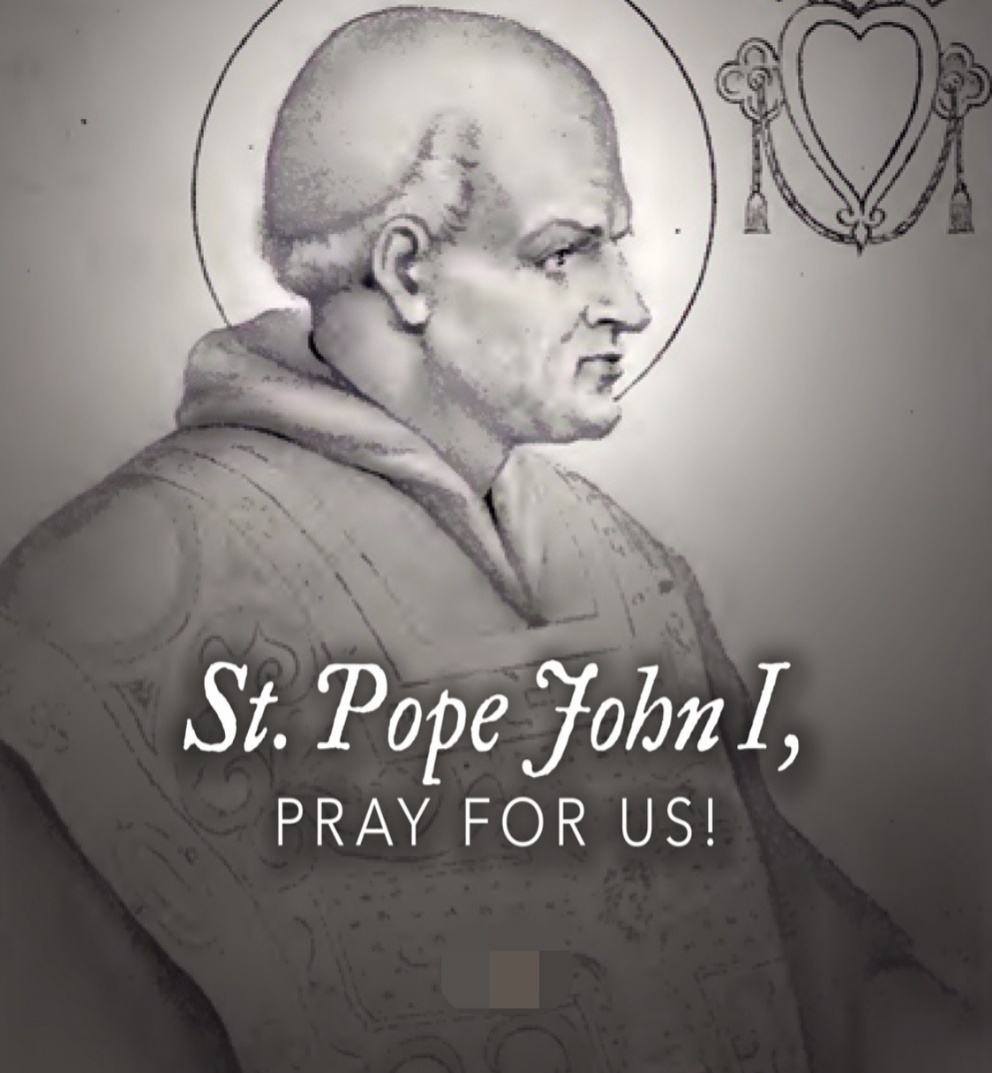 Saint Pope John I, pray for us.