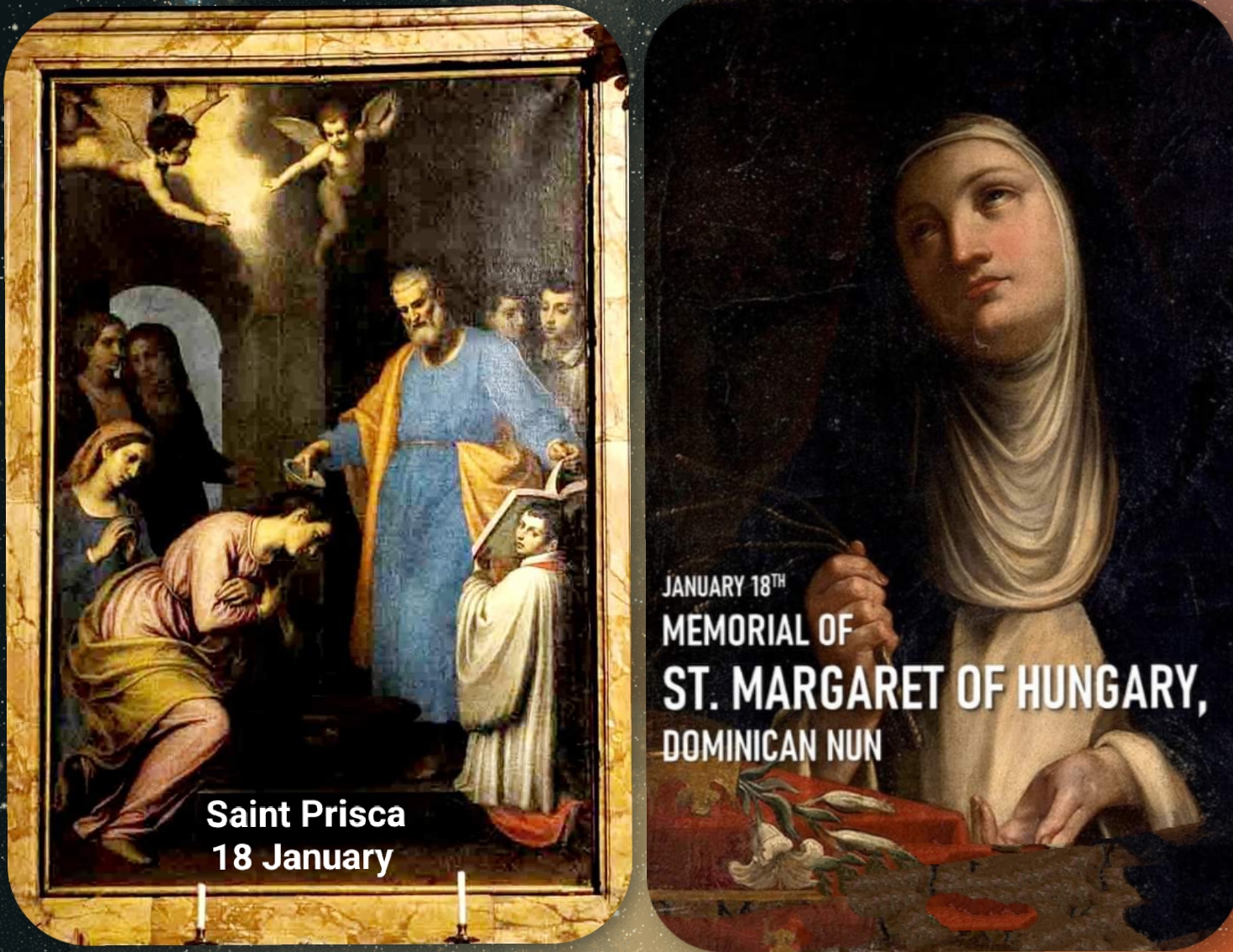 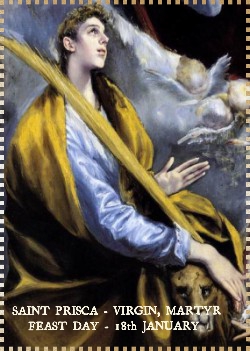 Saint Prisca was a young Roman girl, who was brutally tortured and executed because of her Christian faith. The dates of her birth and death are unknown. She is revered as a saint and a martyr by the Catholic Church and in the Anglican Communion. Especially in England, she is honored as a child martyr. Legend says that Saint Prisca was of noble family. Also known as St. Priscilla, St. Prisca was a child martyr of the early Roman Church. Scholars do not believe she is the Priscilla (Prisca) of the New Testament couple, Priscilla and Aquila, who were friends of the Apostle Paul.

Her parents had managed to keep their secret, and were not suspected of being Christians. But Prisca scorned any precaution and was unafraid to profess to every one what she believed and Whose Cross she followed. She soon became known as a firm little Christian maiden, but there were people in the city, cruel and wicked enough to hate even a child-Christian and to wish her evil. Prisca was seized by guards and brought before Emperor Claudius, who did not persecute Christians with the same fervor as other emperors. Yet, Christians practiced their faith secretly. 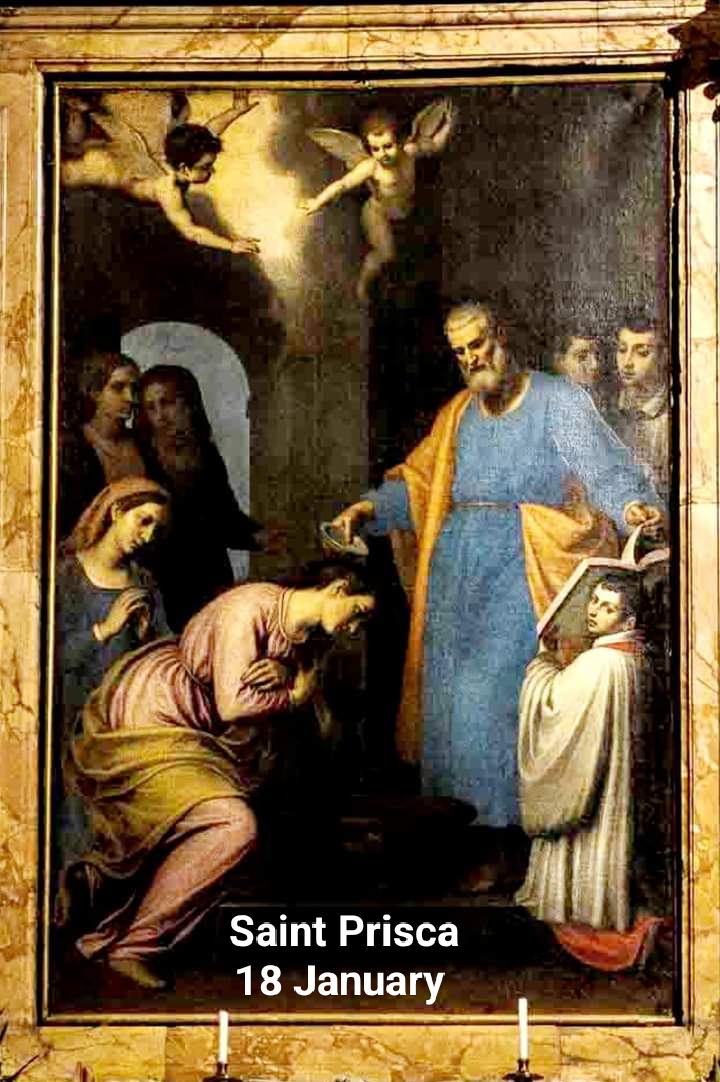 The Emperor, looked at the little maid in surprise to find her so young, and thought that he could easily make this little Christian change her mind. He bade his men take her to the temple of Apollo and make her offer incense to the pagan god. So they carried her to the top of the Palatine, one of the seven hills on which Rome was built. She was thirteen, when she was charged and forced to make a sacrifice to the god Apollo. When she refused because of her Christian faith, she was beaten and sent to prison.

When she was released from prison, she still held steadfastly to her faith in Jesus Christ. This time her punishment included flogging, the pouring of boiling tallow upon her, and a second term of imprisonment. She was at last thrown to a lion in the amphitheater, but it quietly lay down at her feet. The Italian poet Martha Marchina (1600 -1646) describes this moment of Prisca’s martyrdom in poems, in her book Musa Posthuma where the lion’s humane nature is contrasted against human savagery. 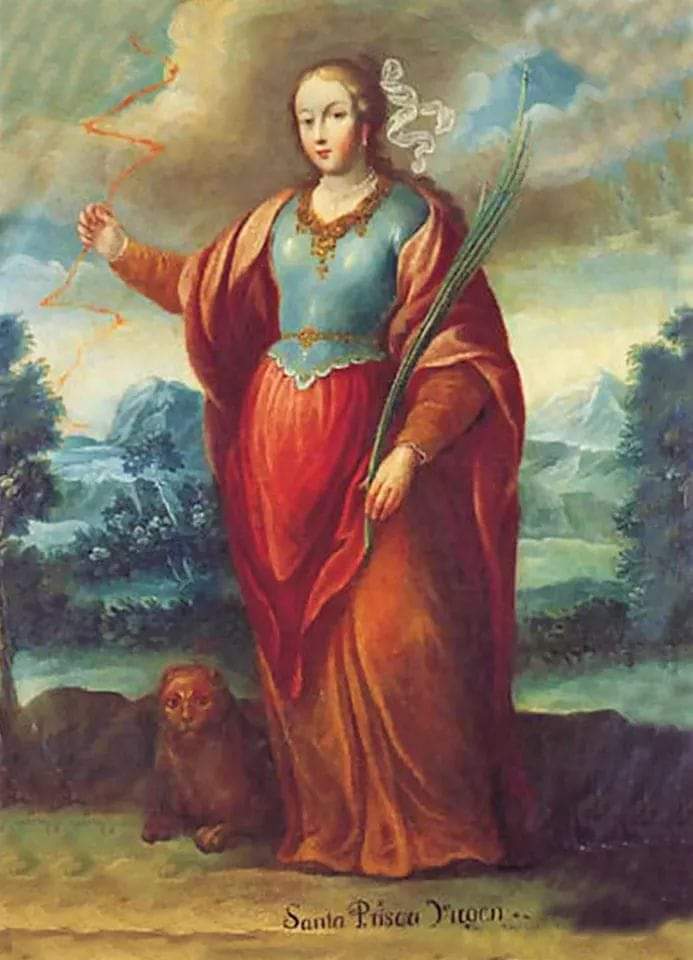 She was starved for three days in a slaves’ prison house, and then tortured upon the rack. Pieces of flesh were next torn from her body with iron hooks, and she was thrown on a burning pile. She miraculously remained alive, but was beheaded at the tenth milestone on the Via Ostiensis—the road from Rome to Ostia. When she died, a great eagle appeared in the sky, hovering over Saint Prisca’s body far up in the air.

And when any of the Romans ventured near her, the eagle swooped down upon them with dreadful cries and flapping of his wings. And his round gray eyes looked so fierce and his claws so long and sharp, that no one dared to touch her for fear of the bird. Saint Prisca had found another protector in cruel Rome. This is why many of the old pictures of Saint Prisca’s martyrdom show a great eagle hovering over her.

The creature guarded her body night and day, driving every one away, until the Christians, who had been waiting for the chance to venture out, came secretly one night and carried her away. They buried her where the Romans could not find her, in their little secret cemetery in Saint Priscilla’s catacombs, where now stands a church of St. Prisca and where previously stood a very early title church, the Titulus Priscoe, mentioned in the fifth century and likely built in the fourth. January 18 is her feast day.

Heavenly Father, you endowed the firm followers of Christ with superlative strength of their faith as Christians, unafraid and loyal, even unto terrible torture, persecution and death. Saint Prisca, the little virgin martyr was one of the ranks of saints who glorified your Name, sacrificially, at the cost of her life.

Help us gain your merits through her intercession, as we give this little saint the honor given to Christ’s fervent disciples, in Jesus’ Name. Amen 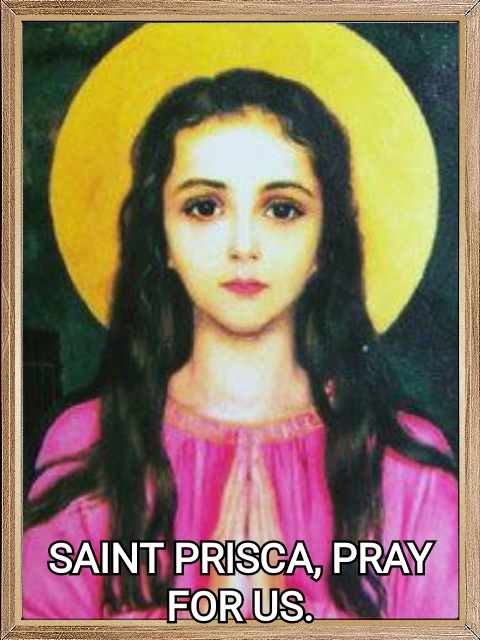 Saint Prisca, pray for us to remain unshaken in the face of trials, in Christ our Lord. Amen 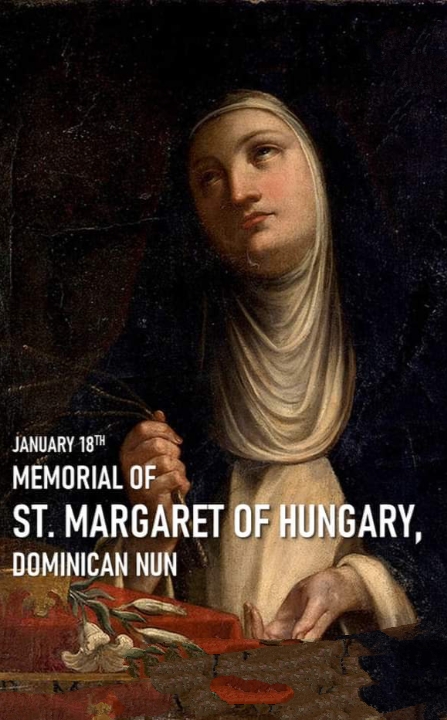 Margaret was born in Klis Fortress in the Kingdom of Croatia, the eighth and last daughter (9th of 10 children) of the royal couple. They resided there during the Mongol invasion of Hungary (1241–42) as her father was also ruler of this land. Her parents vowed that if Hungary was liberated from the Mongols, they would dedicate the child to religion.

The three-year-old Margaret was entrusted by her parents to the Dominican monastery at Veszprém in 1245. Six years later she was transferred to the Monastery of the Blessed Virgin founded by her parents on Nyulak Szigete (Rabbit Island) near Buda (today Margaret Island, named after her, and a part of Budapest; the ruins of the monastery can still be seen). She spent the rest of her life there, dedicating herself to religion and opposing all attempts of her father to arrange a political marriage for her with King Ottokar II of Bohemia. 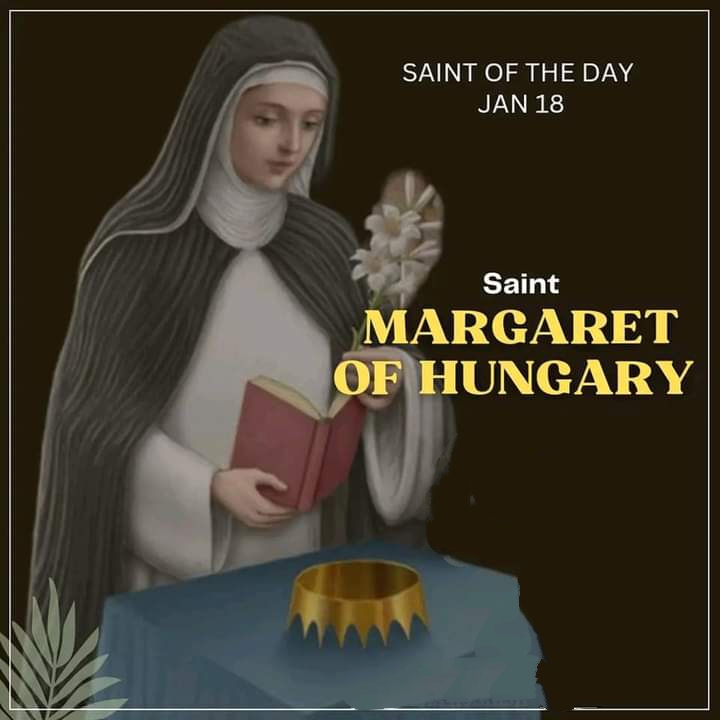 She appears to have taken solemn vows when she was eighteen years old. In marked contrast to the customs of her Order, she received the Consecration of Virgins along with some other royals to prevent further attempts on the part of her father to have her vows dispensed by the pope for marriage.

Many of the details of her life are known from the Legend of Saint Margaret, written probably in the 14th century and translated from Latin to Hungarian in the 15th. The only remaining copy of the legend is in the Margaret Codex copied by the Dominican nun Lea Ráskay around 1510. According to the legend, Margaret chastised herself from early childhood, wore an iron girdle, hairshirts and shoes spiked with nails and performed the most menial work in the convent. The extravagance of the penances she undertook may have shortened her life. She died on 18 January 1270. 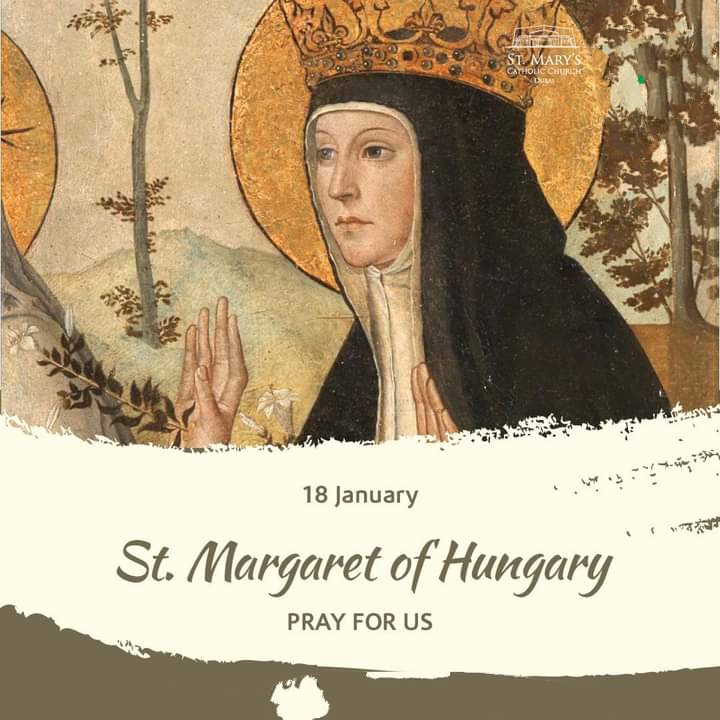 She was venerated as a saint soon after her death, e.g., a church dedicated to her in Bocfolde, Zala County, appears in documents dated 1426. Steps were taken to procure her canonization shortly after her death, at the request of her brother King Stephen V. The necessary investigations were taken up between 1270 and 1276, but the canonization process was not successful, even though 74 miracles were ascribed to her intercession, most of them referring to curing illnesses, even someone coming back from the dead.

Among those giving testimony were 27 people for whom miracles had been wrought. Unsuccessful attempts to canonize her were also made in 1640 and 1770. She was finally canonized by Pope Pius XII on November 19, 1943, at that time the feast day of her aunt, Saint Elizabeth of Hungary. Her feast day is celebrated by the Dominican Order. Raised by Pope Pius VII to a festum duplex, it is the day of her death, January 18. 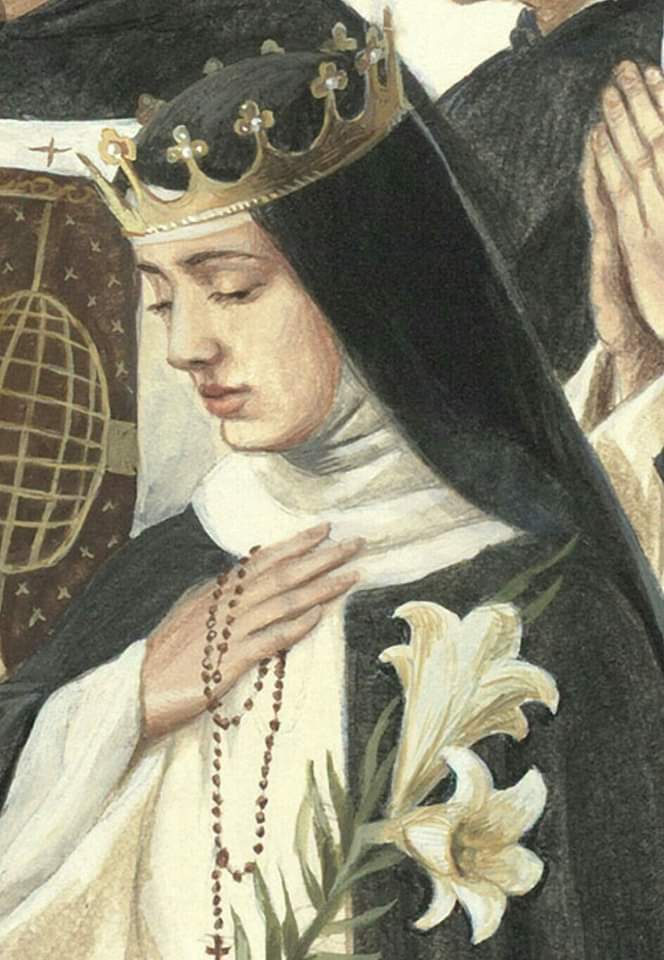 Her monastery was among those suppressed in 1782, part of the suppression of all monastic orders by the Emperor Joseph II. At that time, her remains were given to the Poor Clares. They were kept in Pozsony (today Bratislava) and Buda. The relics were partly destroyed in 1789 but some portions were preserved and are now kept in Esztergom, Győr, and Pannonhalma. In art Margaret is usually depicted in a Dominican nun’s religious habit, holding a white lily and a book.

O God, you called your humble handmaid Saint Margaret of Hungary to dwell on you and walk your Way, before all else. Grant that, through her example and intercession, we may always seek your Holy Will with sanctified and humble hearts, to come at last to dwell in your presence of eternal glory.

We ask this in the Name of Jesus, your Son and our Lord, in the unity of the Holy Spirit. Amen 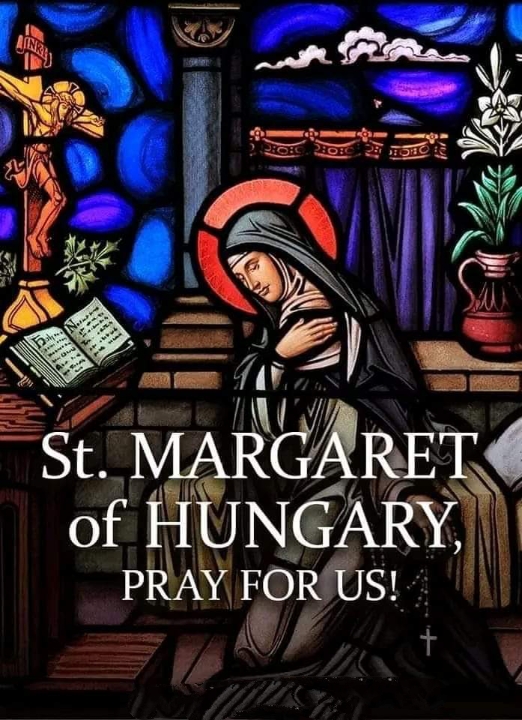