According to Eusebius, Simeon of Jerusalem was selected as James’ successor after the conquest of Jerusalem which took place immediately after the martyrdom of James (i.e. no earlier than 70 AD) which puts the account in agreement with that of Flavius Josephus, who puts James’ first arrest and subsequent release by Procurator Lucceius Albinus in 63 AD and the modern footnotes show that his martyrdom took place some years afterwards, shortly before the destruction of Jerusalem.

After the martyrdom of James and the conquest of Jerusalem which immediately followed, it is said that those of the apostles and disciples of the Lord that were still living came together from all directions with those that were related to the Lord according to the flesh (for the majority of them also were still alive) to take counsel as to who was worthy to succeed James. They all pronounced Simeon, the son of Clopas, of whom the Gospel also makes mention; to be worthy of the episcopal throne of that parish.

According to Hegesippus, Simeon prevailed against Thebutis, whom the church fathers deemed a heresiarch, and led most of the Christians to Pella before the outbreak of the First Roman–Jewish War in 66 and the destruction of Herod’s Temple in 70. According to Eusebius, Simeon was executed about the year 107 or 117 under the reign of emperor Trajan by the proconsul Tiberius Claudius Atticus Herodes in Jerusalem or the vicinity.

However, this must be a mistake by Eusebius because the administrator (Legate) of the Roman province of Judea at the time of the crucifixion was Quintus Pompeius Falco (between 105 and 107 AD) and Tiberius Claudius Atticus Herodes was there much earlier, from 99 to 102 AD. Saint Simeon, at this point in his life, was of greatly advanced age, likely around 120 years old.

Unwilling to recant his faith, he proudly proclaimed the Gospel to all who would listen, all the while enduring all types of torture. Simeon was affixed to a cross, which he embraced as Christ had, and there gained admiration from all present, as he steadfastly and joyously bore the excruciating pains of crucifixion.

Saint Simeon led the Church of Jerusalem through a stormy period of persecution, rebellion, and terror, all the while doing so with the calm fortitude of faith. He spoke out against injustice and sought peace in his city and his Church. Under Saint Simeon’s leadership, the early Church survived, and even managed to grow. The model of his life is one which inspires us to steadfast and joyous endurance of our difficulties, secure in the foundation of our faith.

Simeon is sometimes identified with Simon, the “brother of the Lord”, who is mentioned in passing in the Bible (Matthew 13:55, Mark 6:3) and pointing to Hegesippus referring to him as the second bishop of Jerusalem and as a cousin of Jesus. Other exegetes consider the brothers to be actual brothers and Hegesippus’ wording as subsuming both James and Simeon under a more general term. He has also been identified with the Apostle Simon the Zealot.

ALMIGHTY GOD, mercifully look upon our infirmities, that whereas we are afflicted by the burden of our sins, the glorious intercession of your Martyr and Bishop blessed Simeon may be our succor and defense. This is a Saint who strove for the truth, even unto death, and feared not the words of sinful men, forasmuch as he was founded upon a sure foundation.

May we too build our faith firmly, to remain unshaken in the midst of trouble. Through Jesus Christ your Son our Lord, Who lives and reigns with you, in the unity of the Holy Spirit, one God, world without end. Amen 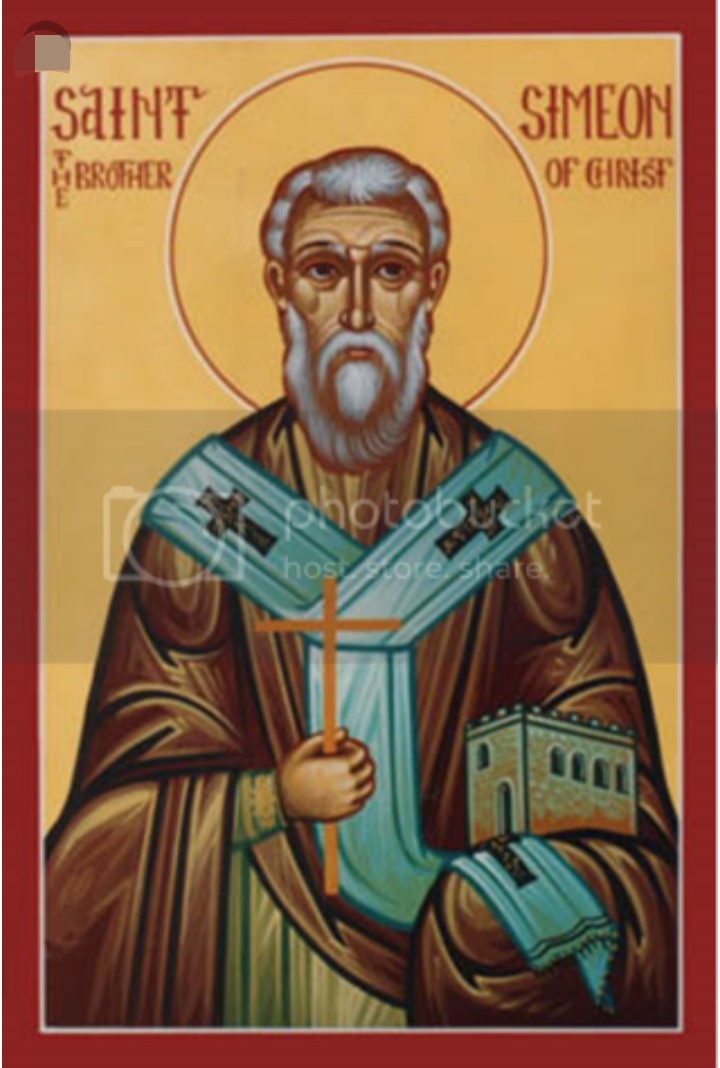 Saint Simeon, pray for us.