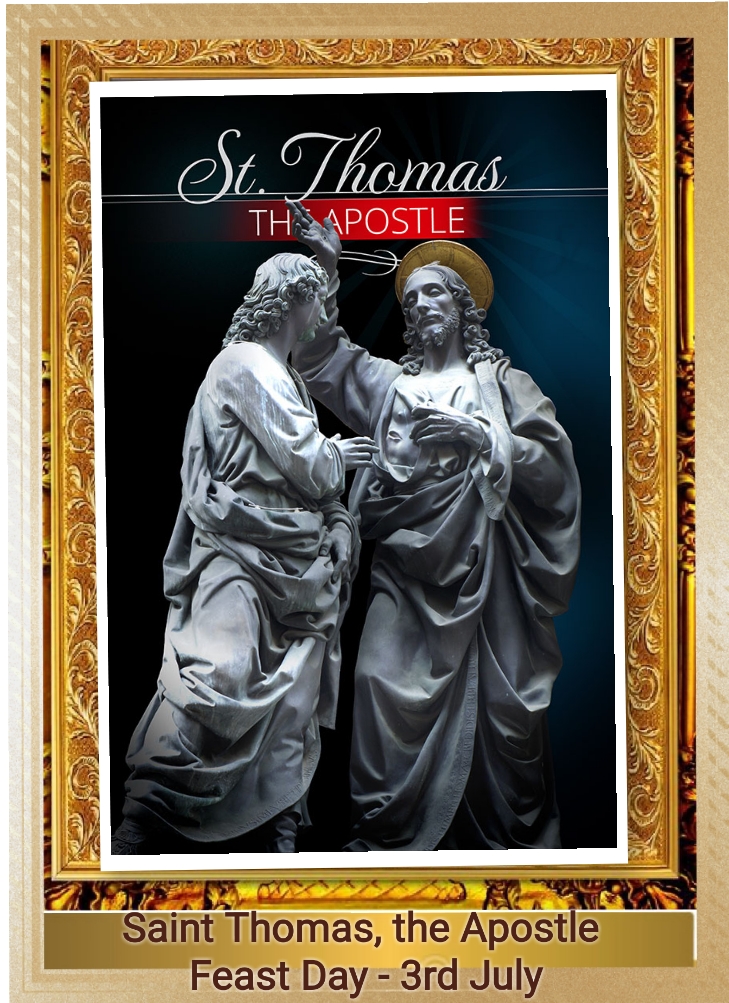 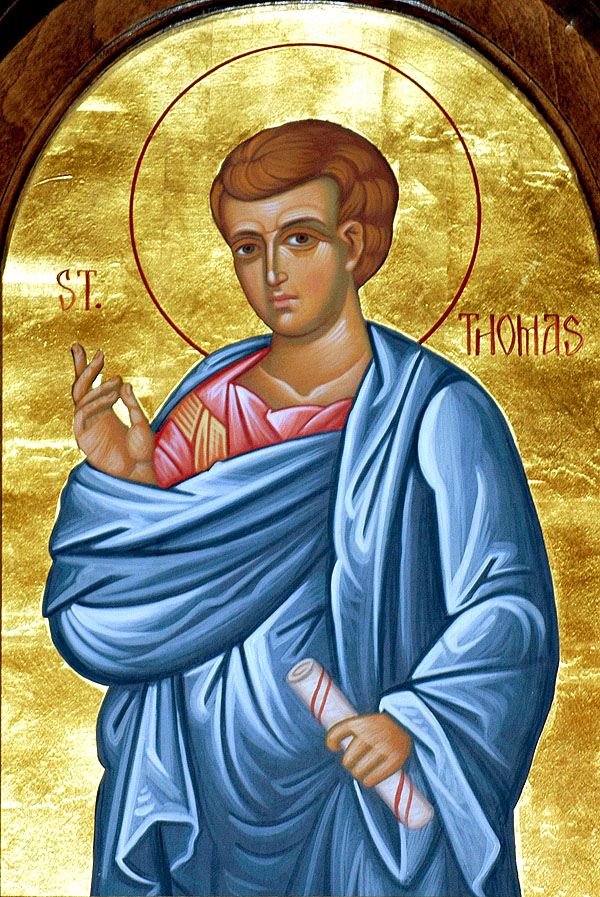 Thomas the Apostle, also known as Didymus (“twin”), was one of the Twelve Apostles of Jesus according to the New Testament. Thomas is commonly known as “Doubting Thomas” because he initially doubted the resurrection of Jesus Christ when he was told of it (as is related in the Gospel of John alone); he later confessed his faith (“My Lord and my God”) on seeing the wounds left over from the crucifixion.

According to traditional accounts of the Saint Thomas Christians of modern-day Kerala in India, Thomas travelled outside the Roman Empire to preach the Gospel, travelling as far as the Tamilakam which is in South India, and reached Muziris of Tamilakam (modern-day North Paravur and Kodungalloor in Kerala State, India) in AD 52. In 1258, some of the relics were brought to Ortona, in Abruzzo, Italy, where they have been held in the Church of Saint Thomas the Apostle. He is regarded as the patron saint of India among its Christian adherents.

The Feast of Saint Thomas on July 3 is celebrated as Indian Christians’ Day. The name Thomas remains quite popular among the Saint Thomas Christians of the Indian subcontinent. Thomas first speaks in the Gospel of John. In John 11:16, when Lazarus has recently died, and the apostles do not wish to go back to Judea, Thomas says: “Let us also go, that we may die with him.”

Thomas speaks again in John 14:5. There, Jesus had just explained that he was going away to prepare a heavenly home for his followers, and that one day they would join him there. Thomas reacted by saying, “Lord, we know not whither thou goest; and how can we know the way?”

John 20:24–29 tells how doubting Thomas was skeptical at first when he heard that Jesus had risen from the dead and appeared to the other apostles, saying, “Except I shall see on his hands the print of the nails, and put my finger into the print of the nails, and thrust my hand into his side, I will not believe.” But when Jesus appeared later and invited Thomas to touch his wounds and behold him, Thomas showed his belief by saying, “My Lord and my God”. 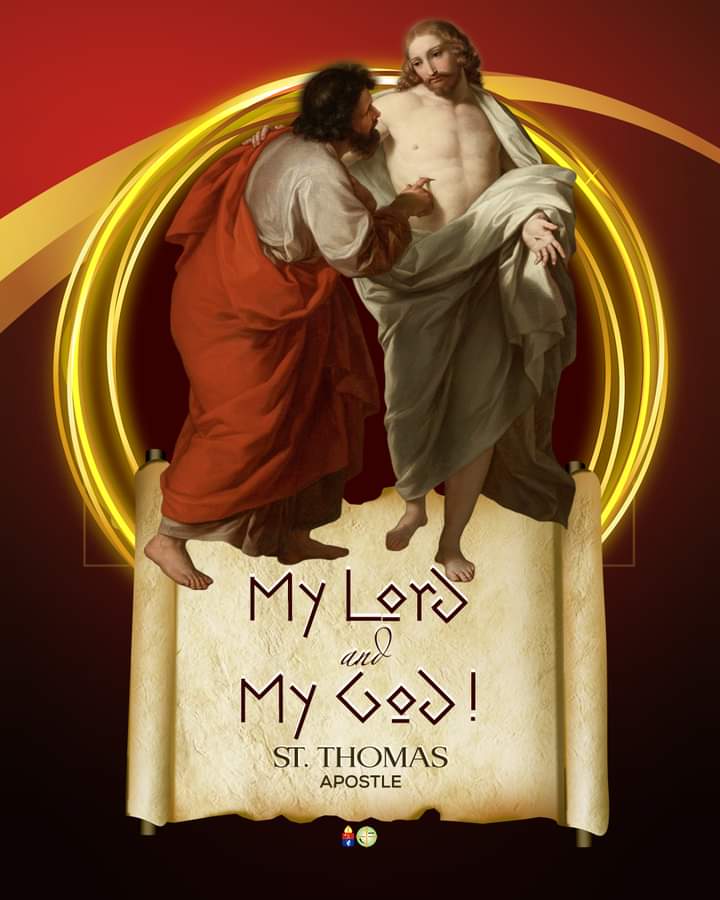 Jesus then said, “Thomas, because thou hast seen me, thou hast believed: blessed [are] they that have not seen, and [yet] have believed.”

When the feast of Saint Thomas was inserted in the Roman calendar in the 9th century, it was assigned to 21 December. The Martyrology of St. Jerome mentioned the apostle on 3 July, the date to which the Roman celebration was transferred in 1969, so that it would no longer interfere with the major ferial days of Advent.

Traditionalist Roman Catholics (who follow the General Roman Calendar of 1960 or earlier) and many Anglicans (including members of the Episcopal Church as well as members of the Church of England and the Lutheran Church, who worship according to the 1662 edition of the Book of Common Prayer), still celebrate his feast day on 21 December. However, most modern liturgical calendars prefer 3 July. Thomas is remembered in the Church of England with a Festival.

The Eastern Orthodox and Byzantine Catholic churches celebrate his feast day on 6 October (for those churches which follow the traditional Julian calendar, 6 October currently falls on 19 October of the modern Gregorian calendar). In addition, the next Sunday of the Easter (Pascha) is celebrated as the Sunday of Thomas, in commemoration of Thomas’ question to Jesus, which led him to proclaim, according to Orthodox teaching, two natures of Jesus, both human and divine.

Thomas is commemorated in common with all of the other apostles on 30 June, in a feast called the Synaxis of the Holy Apostles. He is also associated with the “Arabian” (or “Arapet”) icon of the Theotokos (Mother of God), which is commemorated on 6 September (19 September). The Malankara Orthodox church celebrates his feast on three days, 3 July (in memory of the relic translation to Edessa), 18 December (the Day he was lanced), and 21 December (when he died).

The Passing of Mary, adjudged heretical by Pope Gelasius I in 494, was attributed to Joseph of Arimathea. The document states that Thomas was the only witness of the Assumption of Mary into heaven. The other apostles were miraculously transported to Jerusalem to witness her death. Thomas was left in India, but after her first burial, he was transported to her tomb.

Here he witnessed her bodily assumption into heaven, from which she dropped her girdle. In an inversion of the story of Thomas’ doubts, the other apostles are skeptical of Thomas’ story until they see the empty tomb and the girdle. Thomas’ receipt of the girdle is commonly depicted in medieval and pre-Council of Trent Renaissance art.

According to Eusebius’ record, Thomas and Bartholomew were assigned to Parthia and India. The Didascalia (dating from the end of the 3rd century) states, “India and all countries condering it, even to the farthest seas… received the apostolic ordinances from Judas Thomas, who was a guide and ruler in the church which he built.” 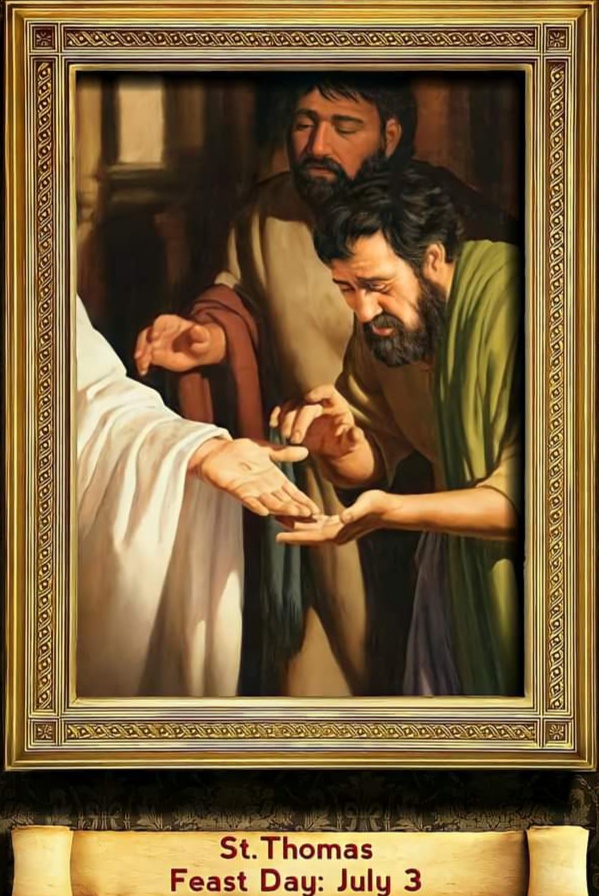 Thomas is believed to have left northwest India when an attack was threatened and traveled by vessel to the Malabar Coast, possibly visiting southeast Arabia and Socotra en route, and landing at the former flourishing port of Muziris (modern-day North Paravur and Kodungalloor) (c. AD 50) in the company of a Jewish merchant Abbanes/Habban (Schonfield, 1984,125).

From there he is said to have preached the gospel throughout the Malabar coast. The various churches he founded were located mainly on the Periyar River and its tributaries and along the coast, where there were Jewish colonies. In accordance with apostolic custom, Thomas ordained teachers and leaders who were reported to be the earliest ministry of the Malankara Church.

According to Syrian Christian tradition, Thomas was killed with a spear at St. Thomas Mount in Chennai on 3 July in AD 72, and his body was interred in Mylapore. Ephrem the Syrian states that the Apostle was killed in India, and that his relics were taken then to Edessa. This is the earliest known record of his death. 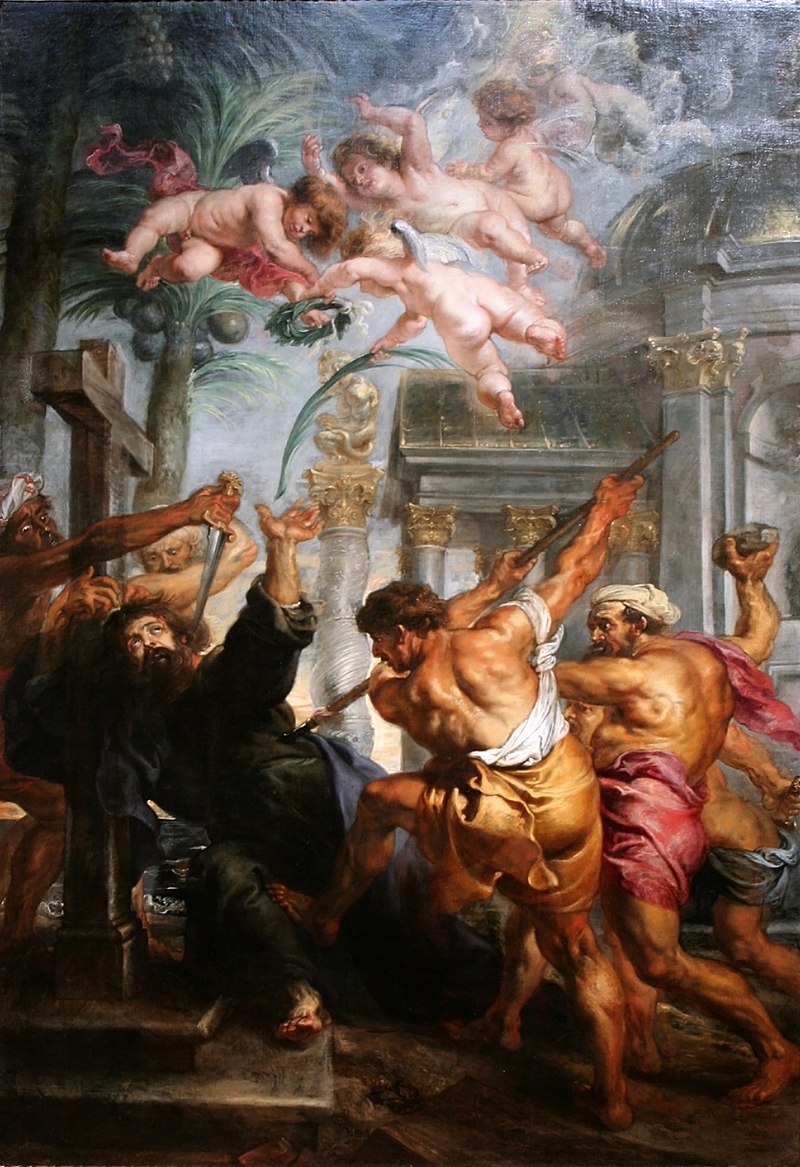 Traditional accounts say that the Apostle Thomas preached not only in Kerala but also in other parts of Southern India – and a few relics are still kept at San Thome Basilica in Mylapore neighborhood in the central part of the city of Chennai in India. Marco Polo, the Venetian traveller and author of Description of the World, popularly known as Il Milione, is reputed to have visited Southern India in 1288 and 1292.

The first date has been rejected as he was in China at the time, but the second date is generally accepted. According to tradition, in AD 232, the greater portion of relics of the Apostle Thomas are said to have been sent by an Indian king and brought from Mylapore to the city of Edessa, Mesopotamia, on which occasion his Syriac Acts were written.

The Indian king is named as “Mazdai” in Syriac sources, “Misdeos” and “Misdeus” in Greek and Latin sources respectively, which has been connected to the “Bazdeo” on the Kushan coinage of Vasudeva I, the transition between “M” and “B” being a current one in Classical sources for Indian names. The martyrologist Rabban Sliba dedicated a special day to both the Indian king, his family, and St Thomas:

Coronatio Thomae apostoli et Misdeus rex Indiae, Johannes eus filius huisque mater Tertia (Coronation of Thomas the Apostle, and Misdeus king of India, together with his son Johannes (thought to be a latinization of Vizan) and his mother Tertia) Rabban Sliba
— Bussagli 1965, p. 255

In the 4th century, the martyrium erected over his burial place brought pilgrims to Edessa. In the 380s, Egeria described her visit in a letter she sent to her community of nuns at home (Itineraria Egeriae):

We arrived at Edessa in the Name of Christ our God, and, on our arrival, we straightway repaired to the church and memorial of saint Thomas. There, according to custom, prayers were made and the other things that were customary in the holy places were done; we read also some things concerning saint Thomas himself. 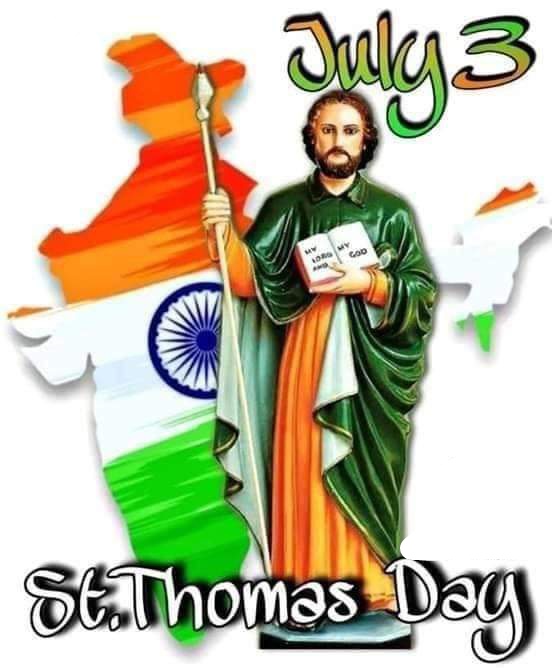 The church there is very great, very beautiful and of new construction, well worthy to be the house of God, and as there was much that I desired to see, it was necessary for me to make a three days’ stay there. According to Theodoret of Cyrrhus, the bones of Saint Thomas were transferred by Cyrus I, Bishop of Edessa, from the martyrium outside of Edessa to a church in the south-west corner of the city on 22 August 394.

In 441, the Magister militum per Orientem Anatolius donated a silver coffin to hold the relics. In AD 522, Cosmas Indicopleustes (called the Alexandrian) visited the Malabar Coast. He is the first traveller who mentions Syrian Christians in Malabar, in his book Christian Topography. He mentions that in the town of “Kalliana” (Quilon or Kollam) there was a bishop who had been consecrated in Persia. In 1144, the city was conquered by the Zengids and the shrine destroyed.

Accounts of Thomas’ missionary activities are unreliable, but the most widely accepted report holds that he preached in India, although he was reluctant to start the mission. According to the Acta Thomae, the apostles divided up the world for their missionary labors, and India fell to Thomas. However, Thomas claimed that he was not healthy enough and that a Hebrew could not teach Indians; even a vision of Christ could not change his mind.

Christ then appeared to a merchant and sold Thomas to him as a slave for his master, a king who ruled over part of India. One story suggests that Thomas offered to build a palace for the Indian king that would last forever. The king gave him money, which Thomas gave to the poor. Asked to show his progress, St. Thomas explained that the palace he was building was in heaven, not on earth.

Ultimately, after giving into God’s will, Thomas was freed from slavery. He planted seeds for the new Church, forming many parishes and building many churches along the way. To this day, Saint Thomas is venerated as the Apostle of India. In fact, there exists a population of Christians along the Malabar Coast, on the western coast of India, who lay claim to conversion by St. Thomas.

Their tradition holds that he built seven churches, was martyred during prayer by a spearing on the “Big Hill” near Madras, and was buried in Mylapore, on the east coast of India. Ultimately, St. Thomas’ remains were transported to Ortona, Italy, where they reside today.

O Glorious Saint Thomas, your grief for Jesus was such that it would not let you believe he had risen unless you actually saw him and touched his wounds.

But your love for Jesus was equally great and it led you to give up your life for him. Pray for us that we may grieve for our sins which were the cause of  Christ’s sufferings.

Help us to spend ourselves in his service and so earn the title of “blessed” which Jesus applied to those who would believe in him without seeing him. Amen (Source of prayer: catholicfaithstore.com) 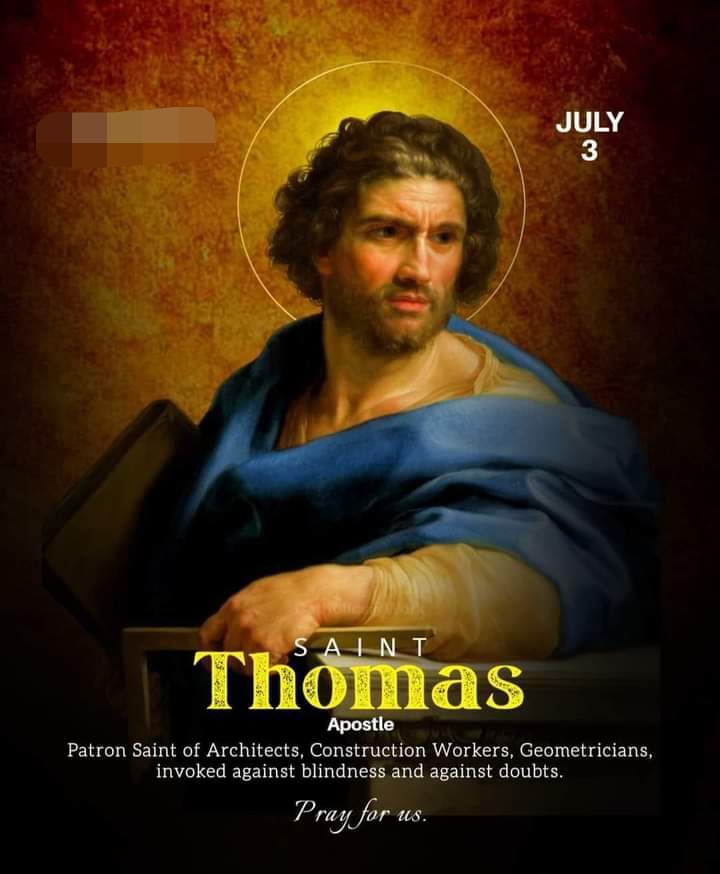 Saint Thomas, the Apostle, pray for us.