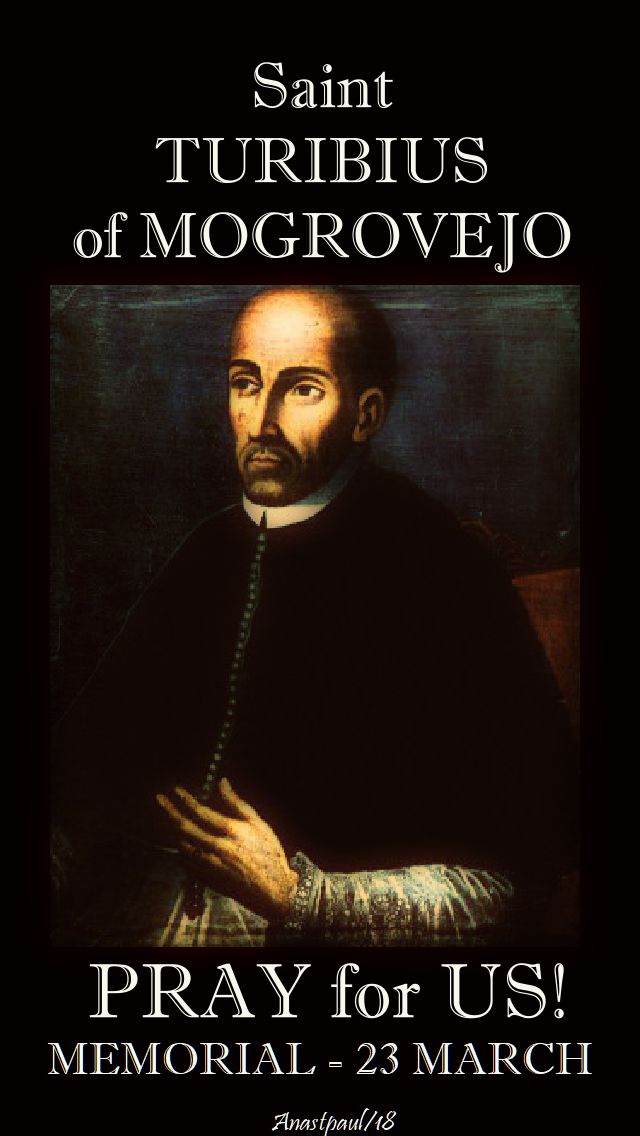 Toribio Alfonso de Mogrovejo (16 November 1538 – 23 March 1606) was a Spanish prelate of the Catholic Church who served as the Archbishop of Lima from 1579 until his death. He first studied in the humanities and law before serving as a professor and later as the Grand Inquisitor at the behest of King Philip II. His piety and learning had reached the ears of the king who appointed him to that position which was unusual, since he had no previous government or judicial experience.

Toribio Alfonso de Mogrovejo was born in 1538 in Mayorca, Spain, into a noble family. From childhood, his disposition was turned toward virtue and against sin. He also had a great devotion to the Most Holy Virgin. He prayed her Office and the Rosary every day and fasted on Saturdays in her honor. He had a natural inclination for academics, and studied law at Valladolid and Salamanca.

In recognition of his virtue and learning, King Philip II named him chief judge of the Supreme Court of Granada, and head of the Inquisition in the same city. His noted work for the Inquisition earned him praise from the king who nominated him for the vacant Lima archdiocese. The pope confirmed this despite his protests. He carried out his office in an exceptional way for five years.

In 1580 when the Episcopal See of Lima, Peru, became vacant, the King selected him to fill this position. Toribio protested he was not worthy of the honor and used his knowledge of Church law to contest the appointment. He was overruled, consented, and was ordained priest and consecrated Bishop in order to fulfil his new obligations. He arrived in Lima, Peru to assume his office in 1581 at age 43.

His Diocese was immense, and the morals of the Spanish clergy and laymen were very far from being perfect. He also found that the Indian population were being exploited and persecuted. This did not discourage St. Toribio. On the contrary, he resolved to apply the decisions of the Council of Trent in order to reform the region. 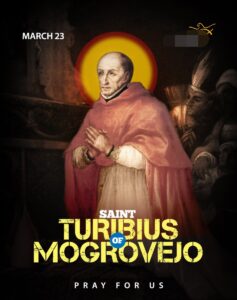 Gifted with an exceptional prudence and great zeal, he began with a reform of the clergy. He was inflexible regarding any moral scandal. He became the scourge of public sinners and the protector of the oppressed. For this reason he was strongly criticized and persecuted, but he received the support of the virtuous Viceroy who had recently arrived in Lima, Don Francisco de Toledo.

Thus he achieved the moral reform he had set out to make. He always did everything he could to save souls, from the greatest to the smallest. He offered his protection to the Indians and, even at an advanced age, he learned many of their dialects so that he could teach them the Catechism. His vigorous action was illuminated by an intense spiritual life – offering Masses, frequent confession as well as meditations, long hours of prayers and severe penances.

He was a noted and charismatic preacher who set about baptizing and catechizing the natives while confirming almost half a million people; these included Rose of Lima and Martin de Porres. The archbishop was a staunch advocate for archdiocesan reform and set to work reforming the diocesan priests from impurities and scandals while instituting new educational procedures for seminaries.

He predicted the exact date and hour of his death. His reputation for holiness and learning was never forgotten, and it led to calls for his canonization. Pope Innocent XI beatified the late archbishop and Pope Benedict XIII canonized him as a saint on 10th December 1726. He is also honored as a saint in the United States Episcopal Church and in the Anglican Communion.

On a diocesan visitation, St. Toribio fell ill with fever at Pacasmayo and was only able to reach the city of Santa, far from Lima. He foresaw his death and distributed his belongings to his servants and the rest of his property to the poor. He died with the words of Jesus Christ on his lips: “Lord, into Thy hands I commend my spirit.” The great apostle of Peru died on March 23, 1606.
He is Patron of Peru, Latin American Bishops, Native Rights, and scouts.

O God, who gave increase to your Church through the apostolic labors and zeal for truth of the Bishop Saint Toribio, grant that the people consecrated to you may always receive new growth in faith and holiness. 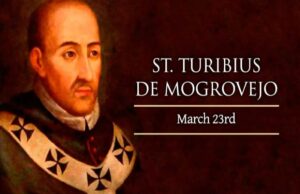