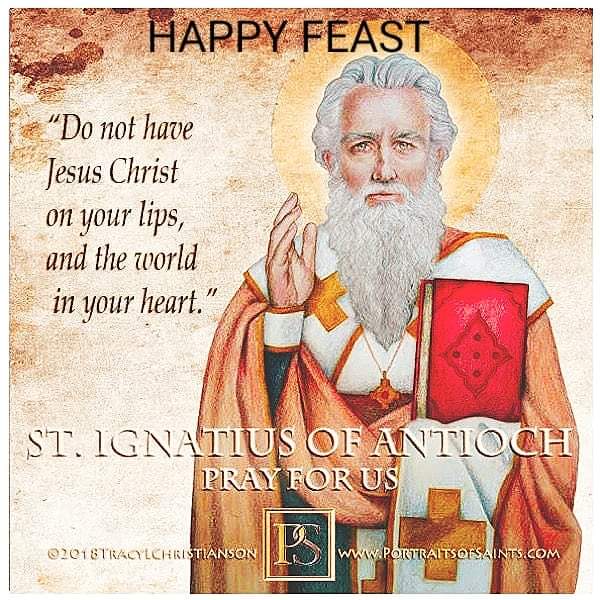 St. Ignatius of Antioch has been well-known since earliest times. He was born in the year 50. He is a precious link to the Apostles. For Christians of the early centuries, Christianity was like an explosion of light in their lives. It was new life, something so undeserved that, notwithstanding persecution, all they could do was praise. Ignatius liked to call himself Theophoros, or “God-bearer” and was a part of the Church of the Apostolic age.

Whatever his origins, he became the second or third bishop of Antioch, in the Roman province of Syria, the city where “the disciples were for the first time called Christians” (Acts 11:26). Ignatius was a friend of St. Polycarp, who was a disciple of St. John, so it is possible that Ignatius, too, knew the beloved disciple.
Testifying to the Word made flesh
Ignatius wanted to set “Judaizing” Christians free of the Mosaic Law, for the old dispensation had been fulfilled in the new. Ignatius was a tireless witness to the Word made flesh, and saw the Incarnation as supreme testament of God’s mercy.

This testament is, first of all, that of the real body of our Lord Jesus Christ: “There is one Physician … both made and not made; God existing in flesh … even Jesus Christ our Lord.” But it is also the Church. According to Ignatius “Wherever the bishop appears, there let the people be; as wherever Jesus Christ is, there is the Catholic Church.” Finally, there is the Eucharist, which Ignatius called “the medicine of immortality.”

This bread is the Eucharist that Ignatius celebrated as bishop, but it is also the eucharist, or “thanksgiving,” that Ignatius himself would become. Writing to the Church of Rome, he asked them not to appeal his death sentence. In this extraordinary letter, Ignatius writes, “I am God’s wheat and shall be ground by [wild beasts’] teeth so that I may become Christ’s pure bread…. Do not stand in the way of my birth to real life.” “Within me is the living water that says, deep inside me, ‘Come to the Father!’ I no longer take pleasure in perishable food… I want only God’s bread, which is the flesh of Jesus Christ … and for drink I crave his Blood, which is love that cannot perish.”

This bishop who had the testimony of the apostles reverberating in him was ground like wheat – the iconographic tradition presents him clear-eyed and serene as lions seize his body. That is how he became living bread. He desired to be, and became, a sacrifice of praise.St. Jerome and St. John Chrysostom both thought of his tomb as near the city gates of Antioch. Ignatius was the third bishop of Antioch. Ignatius was condemned to death during the reign of Emperor Trajan. He was led from Antioch to the center of Roman cruelty-the amphitheater.

When the beloved Ignatius arrived in Rome, he joined the brave Christians who waited in prisons. The day came when the bishop was pushed out into the amphitheater. Two fierce lions devoured him. He left the beautiful witness of Christian life and his letters. St. Ignatius died around 107. Almost everything else that we know of him comes from the seven letters he wrote after his arrest, which the historian Eusebius of Caesarea places during the reign of the Emperor Trajan, somewhere between the years 107 and 110AD. The letters were addressed to Christian communities that Ignatius passed by as he was escorted by Roman soldiers from Antioch to Rome, where he would be fed to wild beasts. These letters are a precious testimony to the life and the faith of the Apostolic Church.

St. Ignatius, it was said thou converted to Christianity as a child. Along with St. Polycarp, thou wert said to be a disciple of St. John the Evangelist. St. Peter himself appointed thee bishop of Antioch. Because thou called thyself Theophorus, or ‘God bearer’, a tradition arose that thou wert one of the children Christ Himself held and blessed in the Gospels. Thou tookest thy duties as bishop seriously – protecting thy flock from heresy, being a gentle pastor, and protecting thine people from persecutions. When thou wert asked to make a sacrifice to the gods and refused, thou wert arrested and sent to Rome. On the way thou wrote several letters to the people of Antioch. Under Emperor Trajan, thou wert sent to the colosseum to be devoured by lions. Thou died as a brave soldier of Christ.

St. Ignatius of Antioch, pray for us!