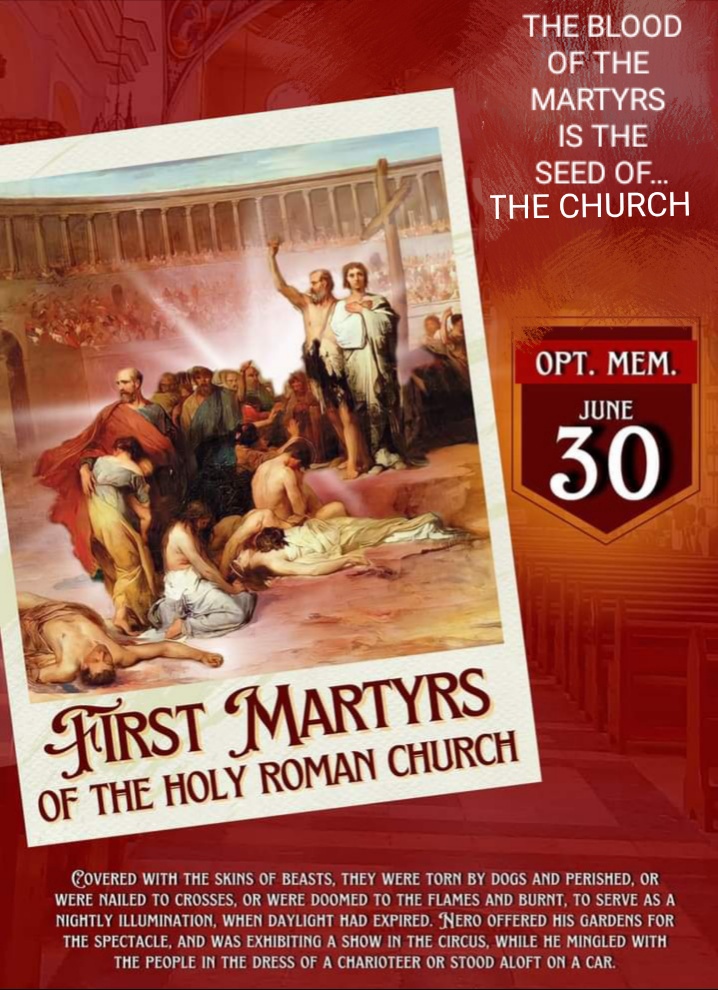 The first martyrs of the Church of Rome were Christians martyred in the city of Rome during the Roman Emperor Nero’s persecution in 64. The event is recorded by both Tacitus and Pope Clement I, among others. They are celebrated in the Roman Catholic Church as an optional memorial on 30 June.

The memorial of the First Martyrs of the Holy Roman Church comes one day after the Solemnity of Saints Peter and Paul. The first day, June 29, is the remembrance of the two most famous martyrs who died during the persecution of Nero, St. Peter crucified upside down in 64 AD and St. Paul beheaded in 67 AD. The second day, June 30, is the remembrance of the countless other nameless saints who died during the same persecution. 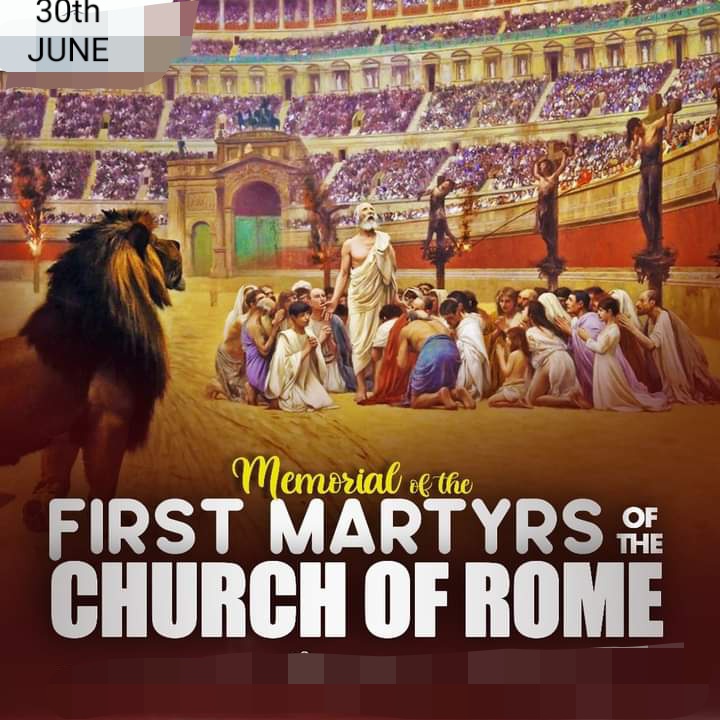 Rome had a large Jewish population. The couple, Priscilla and Aquila, were tent makers from Pontus, whom Paul met in Corinth. They had lived in Rome until the emperor Claudius ordered all the Jews to leave the city. Suetonius mentions this as due to disturbances in the city between the Jews and the followers of “Christus”. Claudius died in 54 AD.

There were early Christians in Rome within a dozen or so years after the death of Jesus, though they were not the converts of Paul. He had not yet visited them at the time he wrote his Epistle to the Romans in 57 – 58 AD. Paul wrote to a community of both Jews and Gentiles. In July of 64 AD, Rome was devastated by fire. Largely made up of wooden tenements, fire was a frequent occurrence in the city. 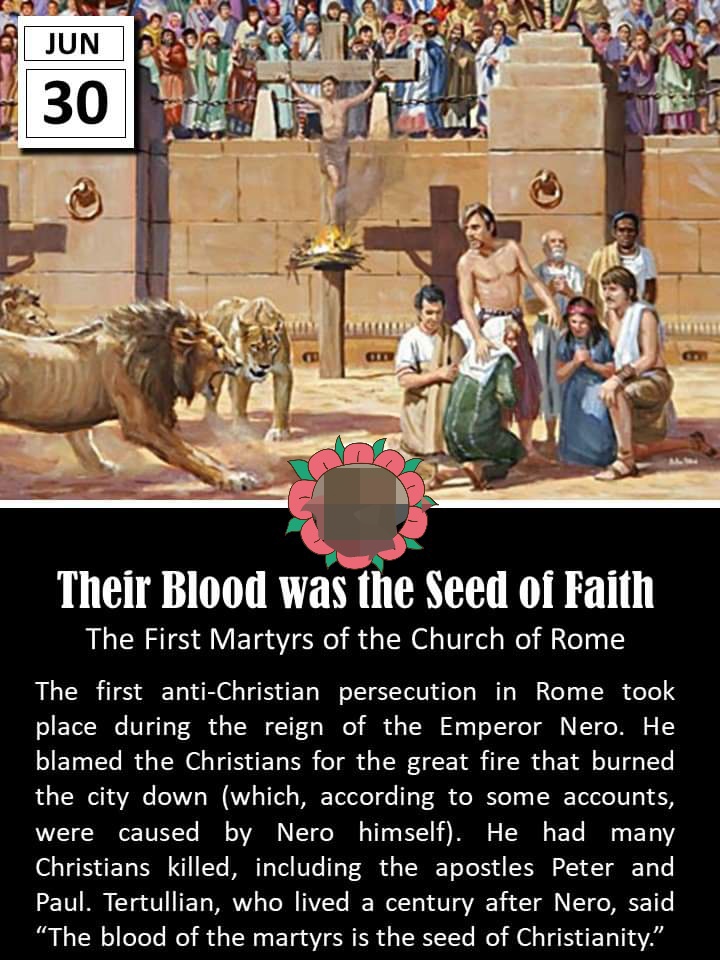 Once the fire began, it spread rapidly, consuming not only the shops but also public buildings, temples, monuments, and homes. It raged for a week. Two-thirds of the city was destroyed. Some historians believe that the unpopular Emperor Nero, a demented and rage-filled person, ordered the fire set. Others believe that he ordered that it be allowed to burn.

Rumor blamed the tragedy on the fact that Emperor Nero wanted to enlarge his palace. He accused the Christians. According to the historian Tacitus, many Christians were put to death “not so much of the crime of firing the city, as of hatred against mankind.” Covered with the skins of beasts, they were torn by dogs and perished, or were nailed to crosses, or were doomed to the flames and burnt, to serve as a nightly illumination, when daylight had expired. 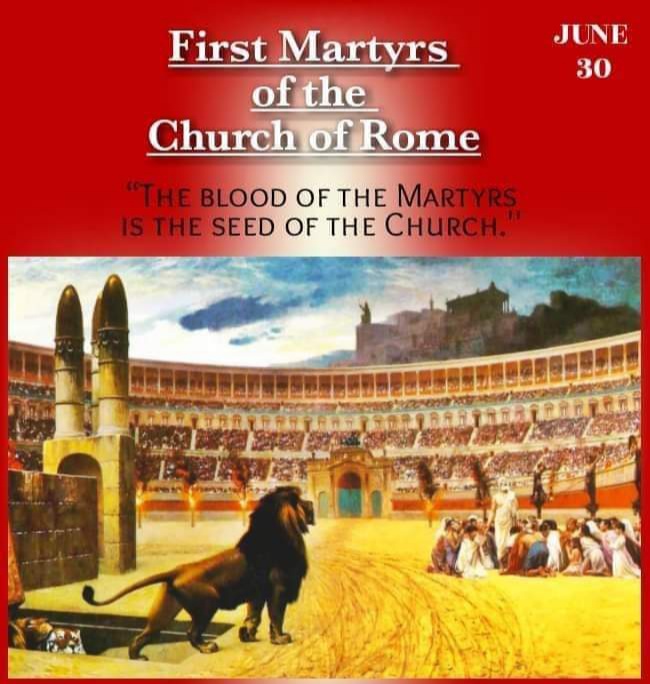 Nero reigned as emperor from 54 to 68 AD. He despised Christians because they steadfastly refused to participate in the worship of the wide array of Roman gods. He did not need an excuse to begin a persecution against Christians, but the devastating fire provided one. He made the Christians the scapegoats and initiated a massive persecution.

The emperor and the residents of Rome took sadistic pleasure in grotesque displays of violence and suffering, usually satisfied by gladiators fighting to the death and savage beasts brutally devouring humans or other animals. This time Christians would provide the spectacle. Roman soldiers combed the city. Christians were torn from their homes, apprehended, and forcibly taken either to Nero’s palace gardens on the Vatican Hill or to various arenas. 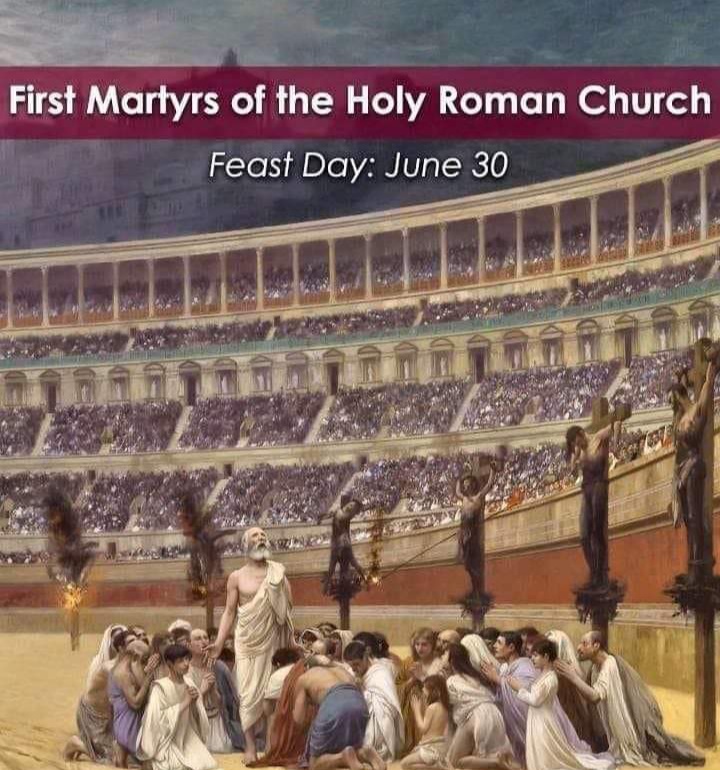 Nero offered his gardens for the spectacle, and was exhibiting a show in the circus, while he mingled with the people in the dress of a charioteer or stood aloft on a car. Hence, even for criminals who deserved extreme and exemplary punishment, there arose a feeling of compassion; for it was not, as it seemed, for the public good, but to glut one man’s cruelty, that they were being destroyed.

Peter and Paul were probably among the victims. This feast first came into the General Roman Calendar in the 1969 calendar reforms. The intention of the feast is to give a general celebration of early Roman martyrs. Prior to the calendar reforms, there were dozens of relatively minor Roman martyrs celebrated or commemorated in the calendar. Several of these had scant historical evidence, but did benefit from immemorial tradition. 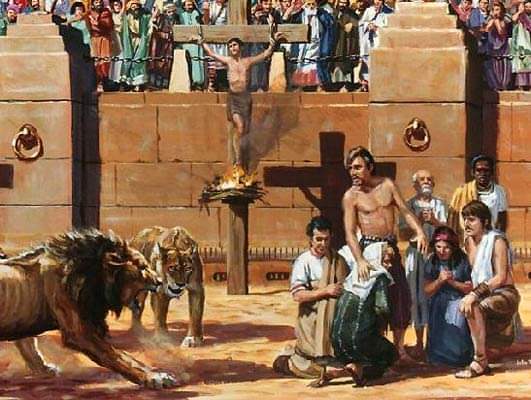 This feast is a replacement for the many Roman martyr feasts, whose absence allowed for a less cluttered and more “dies natale” based sanctoral calendar of more major saints. It also permitted the greater celebration of ferias, partially enacting the Second Vatican Council’s call for the Proper of Time to take a greater precedence.

Early Roman martyrs retain their place in the Martyrology and can be celebrated in local calendars or privately, unless impeded by a greater observance. The placement of the feast is directly after the Solemnity of Sts. Peter and Paul, who are the principal patron saints of Rome. The subsequent martyrs are associated with this patronage. The feast day was formerly occupied with a Commemoration of St. Paul, and fell in the Octave of Sts. Peter and Paul. 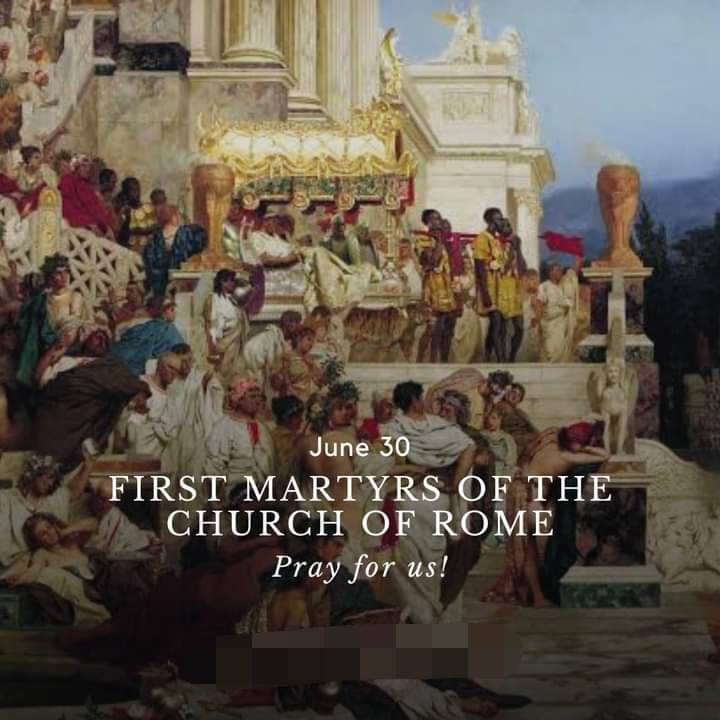 The church of Santi Protomartiri a Via Aurelia Antica in Rome is dedicated to these first martyrs. The First Martyrs “loved Christ in this life and imitated him in their death; and so they will rejoice with him for ever” (Antiphon, Evening Prayer). God “sanctified the Church of Rome with the blood of its first martyrs. May we find strength from their courage and rejoice in their triumph” (Prayer, Liturgy of the Hours).
(Excerpts : thecatholicspirit)

O God, who consecrated the abundant first fruits of the Roman Church by the blood of the Martyrs, grant, we pray, that with firm courage we may together draw strength from so great a struggle and ever rejoice at the triumph of faithful love. 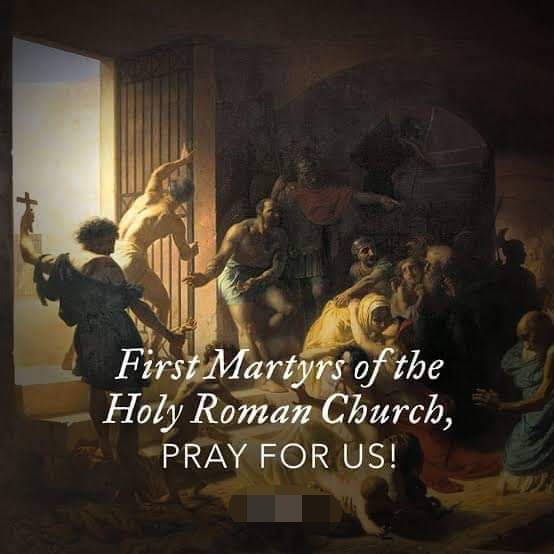 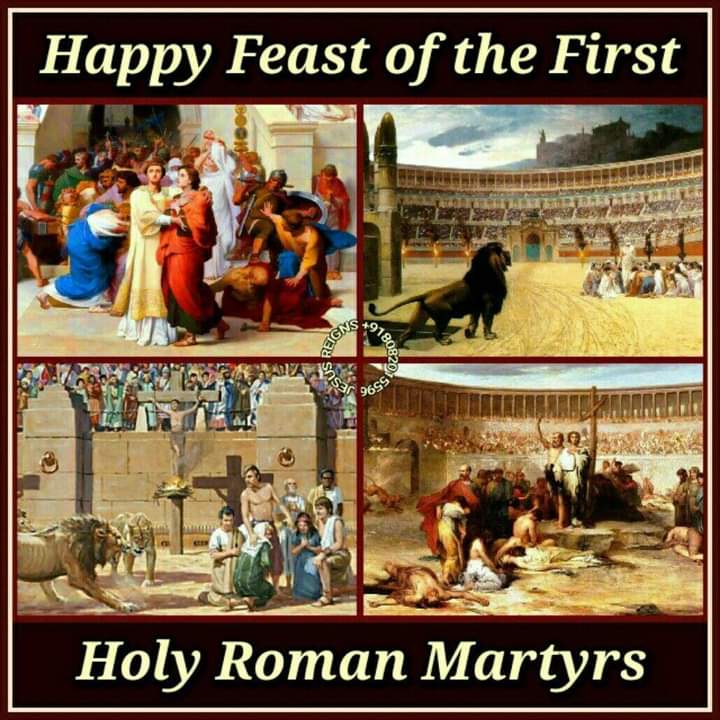