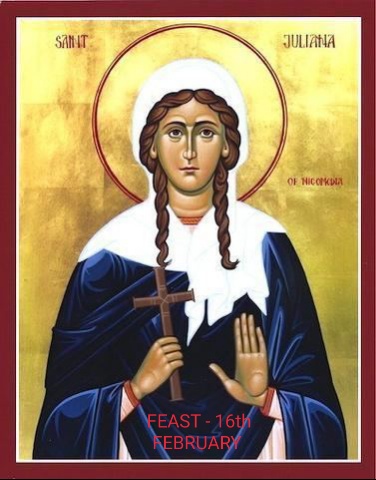 Saint Juliana of Nicomedia is said to have suffered Christian martyrdom during the Diocletian persecution in 304. She was popular in the Middle Ages, especially in the Netherlands, as the patron saint of sickness. Juliana was born in Cumae, Italy, around 285 A. D., the daughter of a pagan official named Africanus. Betrothed at a young age to a nobleman named Evilase, Juliana refused to marry until he first became the prefect of Nicomedia.

While he was working to meet this demand which he eventually did, Juliana converted to Christianity, and made a vow of chastity. She then insisted that Evilase convert, prior to marriage. As a Roman prefect, this was not something he could do and still maintain his position and status. Juliana’s father, who himself despised Christians, beat and abused her in attempts to change her mind, but she would not relent, holding firm to her faith in Christ. Evilase, now well established as prefect, called Juliana before the tribunal, denouncing her as a Christian.

As this was during the persecution of Christians under the order of Emperor Maximianus, there was little choice than to have her executed unless she would recant her faith. Juliana refused, finding her refuge in the Lord, and was made to undergo horrible torture, during which the Devil appeared to her in the guise of an angel, suggesting she give in to the torturer’s request. Juliana was not to be fooled by the snares of the Devil, and praying to the Lord for guidance, she received a message from God. “Do thou seize this vile one and hold him fast, till that he rightly declare unto thee his purpose, even from the beginning what his kinship may be.” And the heart of the glorious maid became glad.

Juliana captured the Devil, holding fast to him, and forced him to recount his sinfulness. As he recounted a very long list of deceit and trickery, Juliana was dragged before the tribunal. She dragged the Devil with her—he, all the while, pleading for freedom. Juliana let the Devil free, but for her part, bravely met her executioner. As per her Acts, she was first partially burnt in flames, then plunged into a pot of boiling oil, and finally beheaded in 305 A.D.

The veneration of Saint Juliana of Nicomedia became very widespread, especially in the Netherlands. She became known as the patron saint of sickness, sick people and bodily ills.

At the beginning of the 13th century her remains were transferred to Naples. The description of this translation by a contemporary writer is still extant. The feast of the saint is celebrated in the Latin Church on 16 February, in the Greek on 21 December. Since her Acts describe the conflicts which she had with the devil, she is represented in pictures with a winged devil whom she leads by a chain. She is also shown enduring various tortures or fighting a dragon.

Eternal God, you bestowed on St. Juliana the crown of everlasting joy, because she sacrificed her life rather than renounce the virginity she had promised in witness to Christ. Edified by her brave generosity, enable us to rise out of the bondage of earthly desires, obtaining the rewards of your kingdom.

Grant this through our Lord Jesus Christ, your Son, who lives and reigns with you and the Holy Spirit, One God, for ever and ever. Amen 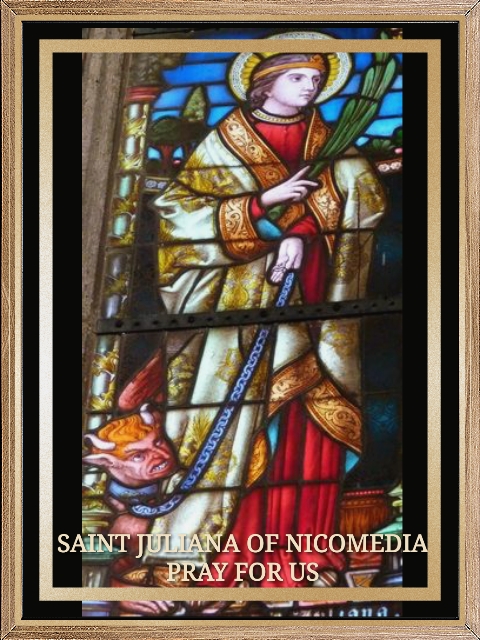 Saint Juliana of Nicomedia, pray for us.