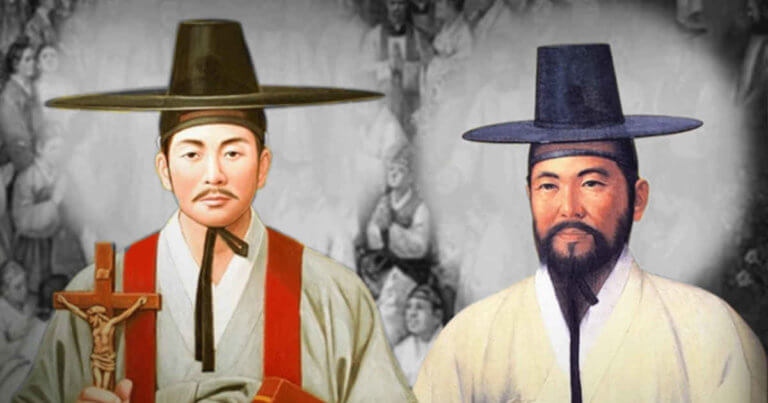 Catholicism was not originally brought to the isolated Korean Peninsula by celibate missionaries who trekked over its remote borders or who landed on its far shores from the outside. Instead, native Korean intellectuals had heard interesting ideas and had read intriguing books imported from nearby China about a new faith. These diplomats, professors and poets went in search of the Church.

They crossed their own borders to speak with Jesuit priests in Beijing. The Koreans dialogued with the Jesuits, read their works, witnessed the celebration of the sacraments, and saw the Chinese Church in action. One of these Korean scholars, a man named Yi-Sung-hun, was baptized as Peter in Beijing in 1784 by a French missionary. Newly minted in Christ, with a convert’s fervor, Peter filled his baggage with catechisms, crucifixes, statues, rosaries, and images of the Virgin Mary and headed back to Korea excited to unpack the new faith for all to see.

Peter baptized some of his friends and together they formed the first community of Catholics in Korea. They met in a house where sits, today, the Cathedral of Myeongdong. The evangelization of Korea was a lay initiative from the first. And once the Catholic seed was planted in Korean soil, it first grew slowly among scholars but then steadily among the populace over time. Today’s feast commemorates the official persecution that burned hot, then cold, then hot, for decades as those first Christian seeds germinated.

As the Church grew like a plant, it protruded too high over the land and was repeatedly cut down in the bloody harvest commemorated today. Hundreds of martyrs, mostly lay men and women, but some French missionary bishops and priests as well, were murdered by successive Korean governments throughout the last decade of the eighteenth century and throughout the nineteenth for the crime of being baptized Catholics. They posed no other threat.

Paul Chŏng Ha-sang was a nobleman whose father and brother were martyred. Sacrifice was in his genes. Paul traveled to Beijing nine times, pleading for the Chinese Church to send priests to the lay-led Korean Church. Along with others, he sent a letter to Pope Pius VII describing the plight of the Korean faithful. Once clandestine priests began to arrive regularly in the 1830s, Paul would go to the Korean border to escort them to the communities of the faithful and lodge them in his own home. Paul was executed in 1839. His mother and sister were killed shortly after him.

Fr. Andrew Kim Tae-gŏn was the very first native-born Korean priest. He departed Korea in 1837 for the Portuguese settlement of Macau to complete his seminary studies. He was ordained by a French missionary bishop in Shanghai in August 1845. He then guided back to Korea the same bishop and a French priest. His priestly ministry would be to die. He was arrested less than a year after his ordination. The authorities were so impressed with his personal bearing, education, and linguistic abilities that they agonized over whether he should be executed. They wrestled with their consciences, but their consciences, in the end, lost. Father Andrew was beheaded at the age of twenty-six in September 1846.

The struggle to establish an organized Church structure in Korea was brutal. Today’s martyrs, whose names are all known and about whom basic facts are verified, stand in the fore. Yet behind them stand, faceless and nameless, thousands of other martyrs known to God alone. They perished by the sword, by crucifixion, in prison, or of starvation, rather than renounce their Christian faith when faced with certain torture and death.

The Catholic Church in South Korea today is immense and vibrant, fully Korean and fully Catholic. The Church in North Korea does not effectively exist, and martyrs may still be dying there today, squeezed to death in the iron grip of its dictators. The story of the Korean Church is one of daring, one of steely courage, but one of tears. Only in 1886 did the century of persecution end, with a French-Korean treaty. Pope Saint John Paul II canonized Fr. Andrew Kim, Paul Chŏng Ha-sang, and 101 other Korean martyrs on May 6, 1984, at a Mass in Seoul, South Korea. It was, at that time, the largest gathering of humanity in the history of the Korean peninsula. The martyrs’ blood was fertile.

Holy Korean martyrs, known and unknown, we implore your powerful intercession in heaven. Give us half your courage, a quarter of your daring, and just one percent of your faith.

With that we can emulate you in the easy circumstances of today, where we suffer metaphorically, but rarely in our bodies. Amen 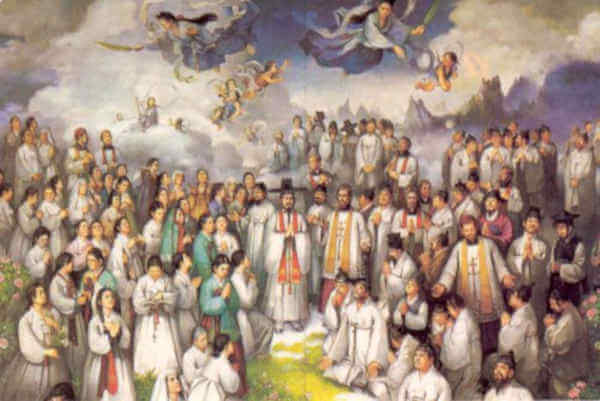