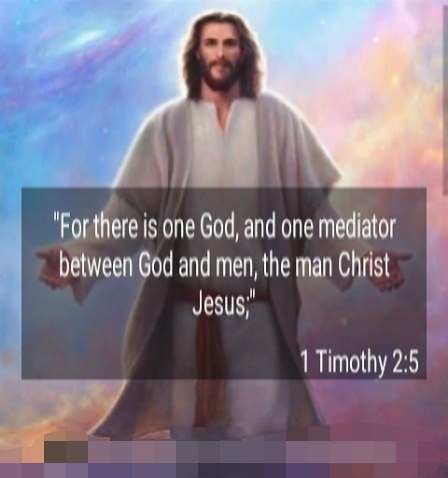 For there is one God. There is also one mediator between God and the human race, Christ Jesus, himself human..- 1 Timothy 2:5

God our Creator, you are the only True God, of all creation, and the Preserver and Deliverer of all peoples, of both the believers and unbelievers. You prevail over all the nations of the world and you rule with the mighty arm of Justice, a reign of Mercy and Righteousness. Lord of the heavens and all the universe, we offer you worship, honor, glory and praise, joining the heavenly beings in melodious rendition of praise and song. The unity of the Triune Godhead, Father, Son and Holy Spirit, be glorified forever.

Lord, you brought salvation to a lost humanity, by sending your Son into the world, in human form, as the Son of Man, to break the chains of sinful bondage and raise human beings to what you, Father, had intended them to be. As Messiah and Mediator, between the Father and creation, Jesus reinstated us to communion with you, as obedient, righteous children of the Father, adopted to sonship and to an eternal inheritance as co-heirs of your kingdom.

Your appointed and anointed One, you sent to a desolate world, as the bearer of the good news of redemption for your people. Jesus carried out his mission in perfect obedience with your plan, wiping out our offences to restore the glory of your majesty. When the sin of man had provoked Divine justice, and the guilt could not be expiated, your Mediator became the Way to the Father, the Truth of the heavenly kingdom, and Life eternal, to all the faithful. Sanctified by our penance and worthy partakers of your Kingdom by our belief, we submit to following our Savior, to reach our God, to dwell eternally, by your saving grace, through Christ our Lord. Amen