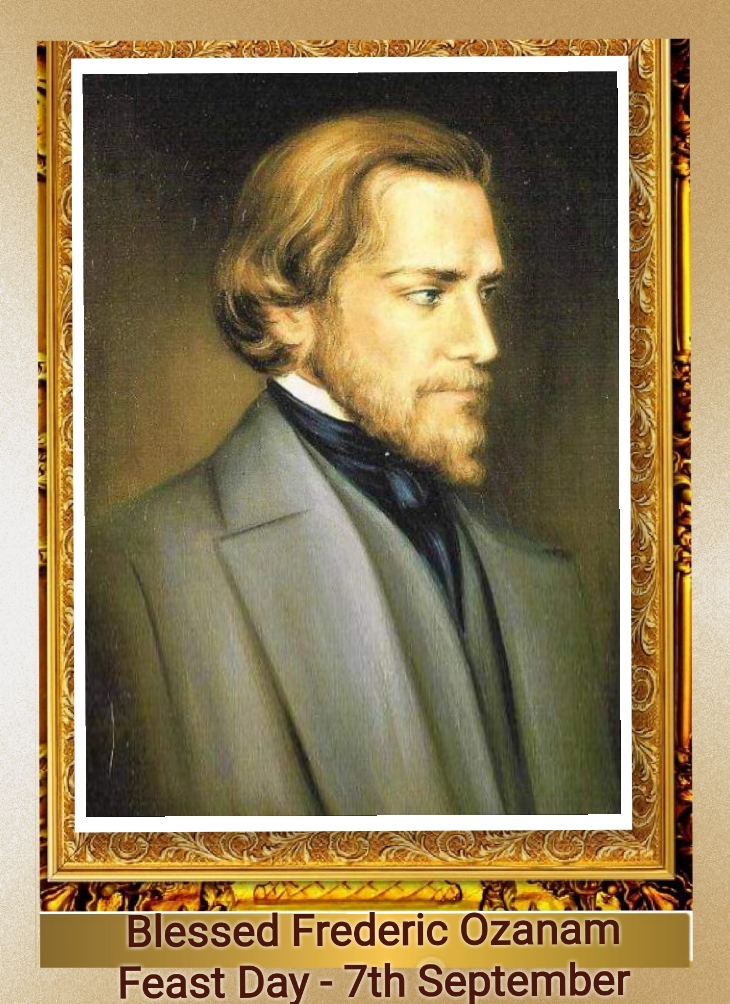 Antoine-Frédéric Ozanam, (23 April 1813 – 8 September 1853) was a French literary scholar, lawyer, journalist and equal rights advocate. He founded with fellow students the Conference of Charity, later known as the Society of Saint Vincent de Paul. He was beatified by Pope John Paul II in the Cathedral of Notre-Dame de Paris in 1997, hence he may be properly called Blessed Frederic by Catholics. 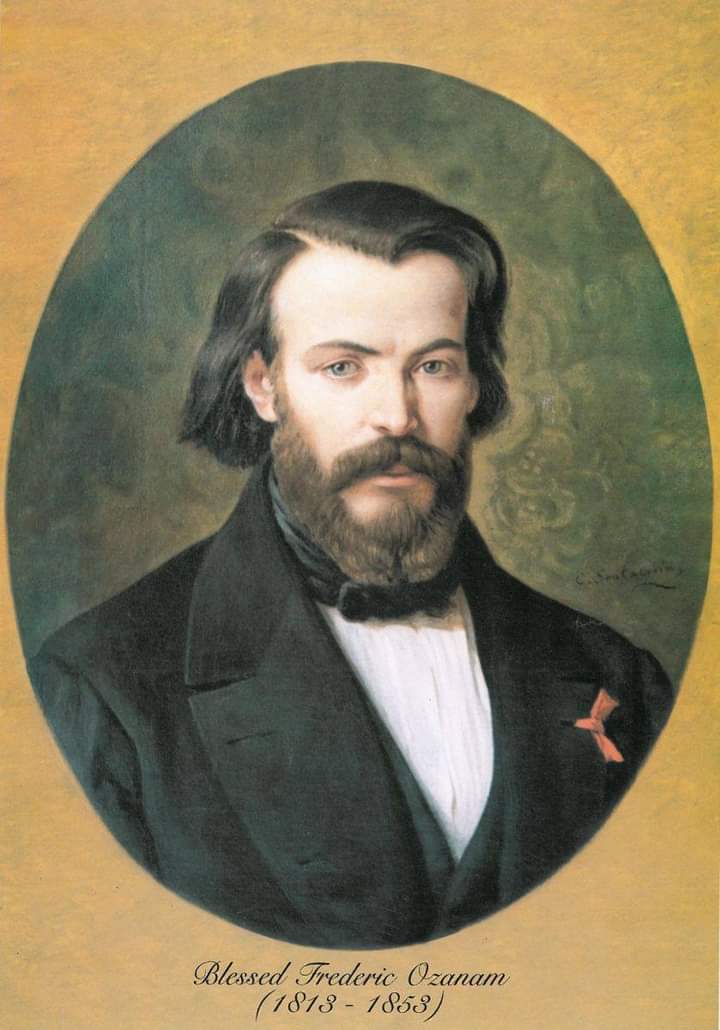 Frédéric Ozanam was born on Friday, 23 April 1813, to Jean and Marie Ozanam. He was the fifth of Jean and Marie Ozanam’s 14 children, one of only three to reach adulthood. His family, which was of Jewish origin, had been settled in the region around Lyon, France, for many centuries. An ancestor of Frédéric, Jacques Ozanam (1640–1717), was a noted mathematician. Jean Ozanam, Frédéric’s father, had served in the armies of the First French Republic, but with the rise to power of Napoleon Bonaparte, and the founding of the First French Empire, he turned to trade, to teaching, and finally to medicine.

Ozanam was born in Milan, but brought up in Lyon. In his youth, he experienced a period of doubt regarding the Catholic faith, during which he was strongly influenced by one of his teachers at the Collège de Lyon, the priest Abbé Noirot. His religious instincts showed themselves early, and in 1831 he published Réflexions sur la Doctrine de Saint-Simon, a pamphlet against Saint-Simonianism, which attracted the attention of the French poet and politician Alphonse de Lamartine who was born in the area. 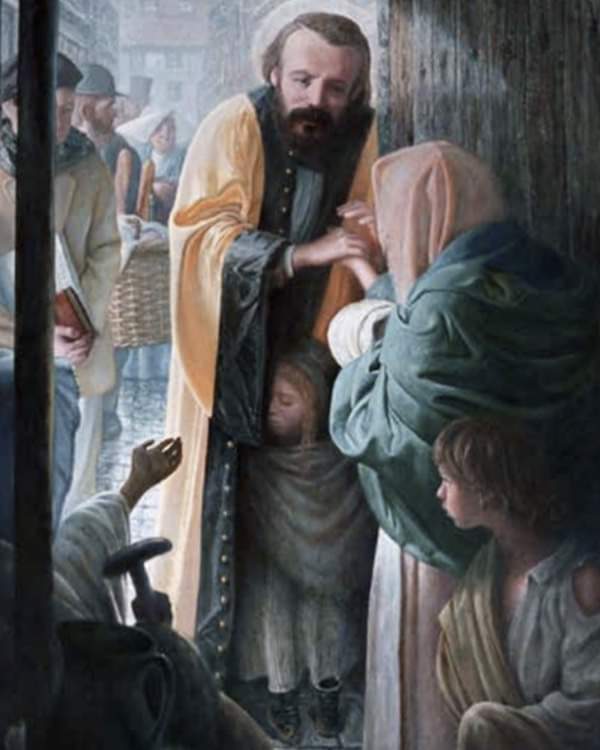 Ozanam also found time to help organize and write for the Association for the Propagation of the Faith, a lay Catholic organization founded in the city with the aim of supporting Catholic missionaries, many of which came from the area. That autumn he went to study law in Paris, where he suffered a great deal from homesickness. Ozanam fell in with the Ampère family (living for a time with the mathematician André-Marie Ampère), and through them with other prominent liberal Catholics of the time, such as Count François-René de Chateaubriand, Jean-Baptiste Henri Lacordaire, and Charles Forbes René de Montalembert.

While still a student, Ozanam took up journalism and contributed considerably to Bailly’s Tribune catholique, which became L’Univers, a French Catholic daily newspaper that adopted a strongly ultramontane position. Ozanam and his friends revived a discussion group called a “Society of Good Studies” and formed it into a “Conference of History” which quickly became a forum for large and lively discussions among students. Their attentions turned frequently to the social teachings of the Gospel.

At one meeting during a heated debate in which Ozanam and his friends were trying to prove from historical evidence alone the truth of the Catholic Church as the one founded by Christ, their adversaries declared that, though at one time the Church was a source of good, it no longer was. One voice issued the challenge, “What is your church doing now? What is She doing for the poor of Paris? Show us your works and we will believe you!” 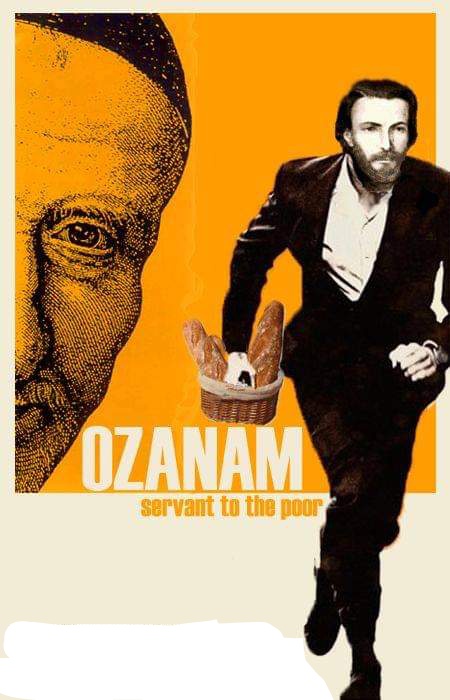 As a consequence, in May 1833 Ozanam and a group of other young men founded the charitable Society of Saint Vincent de Paul, which already by the time of his death numbered upwards of 2,000 members. The founding members developed their method of service under the guidance of Sister Rosalie Rendu, a member of the Congregation of Daughters of Charity of Saint Vincent de Paul, who was prominent in serving the poor in the slums of Paris.

The members of the conferences collaborated with Rendu during the time of the cholera epidemic. When fear had gripped the population, she organized the conferences in all the neighborhoods of Paris to care for the cholera victims, becoming well known in the city for her work, especially in the 12th arrondissement. Frederic’s first act of charity was to take his supply of winter firewood and bring it to a widow whose husband had died of cholera.

Ozanam received the degrees of Bachelor of Laws in 1834, Bachelor of Arts in 1835 and Doctor of Laws in 1836. His father, who had wanted him to study law, died on 12 May 1837. Although he preferred literature, Ozanam worked in the legal profession in order to support his mother, and was admitted to the Bar in Lyon in 1837. Still, he also pursued his personal interest, and in 1839 he obtained the degree of Doctor of Letters with a thesis on Dante that then formed the basis of Ozanam’s best-known books. 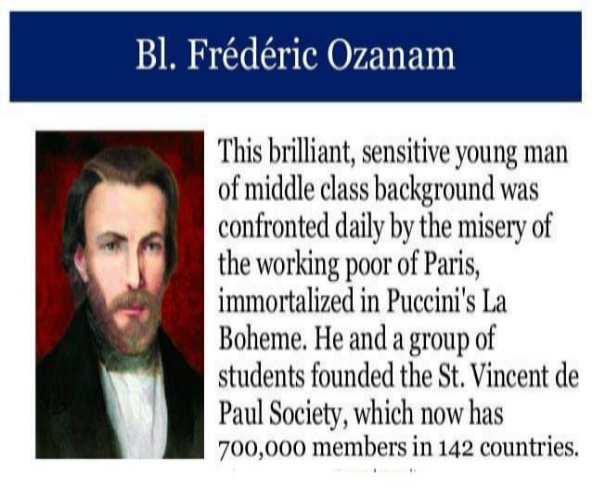 A year later he was appointed to a professorship of commercial law at Lyon, and in 1840, at the age of twenty-seven, assistant professor of foreign literature at the Sorbonne. He decided to give a course of lectures on German Literature in the Middle Ages and in preparation for it went on a short tour of Germany. His lectures proved highly successful despite the fact that he attached fundamental importance to Christianity as the primary factor in the growth of European civilization.

This was unlike his predecessors and most of his colleagues, who shared in the predominantly anti-Christian climate of the Sorbonne at that time. In June 1841, he married Amélie Soulacroix, daughter of the rector of the University of Lyon, and the couple travelled to Italy for their honeymoon. They had a daughter, Marie. 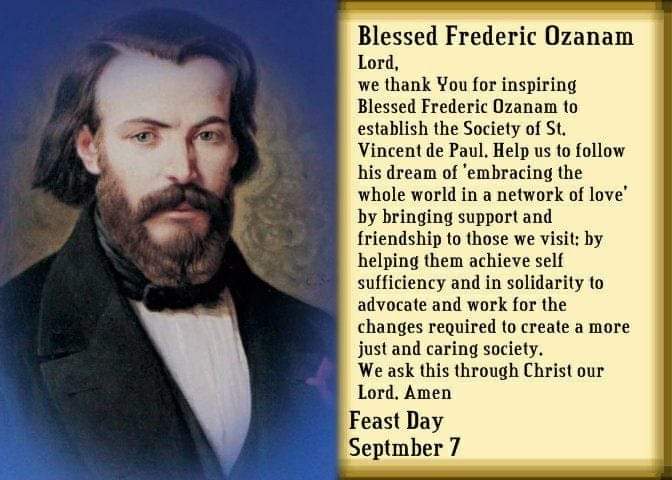 Candelas describes Ozanam as “a man of great faith. He valued friendships and defended his friends no matter what the cost. He was attentive to details, perhaps to the extreme. He showed a great tenderness when dealing with his family. He had a great reverence for his parents, and revealed his ability to sacrifice his career and his profession in order to please them.

Upon the death in 1844 of Claude Charles Fauriel, Ozanam succeeded to the full professorship of foreign literature at the Sorbonne. The remainder of his short life was extremely busy, attending to his duties as a professor, his extensive literary activities, and the work of district-visiting as a member of the society of St. Vincent de Paul.

During the French Revolution of 1848, of which he took a sanguine view, he once more turned journalist by writing, for a short time, in various papers, including the Ère nouvelle (“New Era”), which he had founded. He traveled extensively, and visited England at the time of the Exhibition of 1851.

His naturally weak constitution fell prey to consumption, which he hoped to cure by visiting Italy, but on his return to France he died in Marseille on Thursday, 8 September 1853, at the age of 40. He was buried in the crypt of the church of St. Joseph des Carmes at the Institut Catholique in Paris. 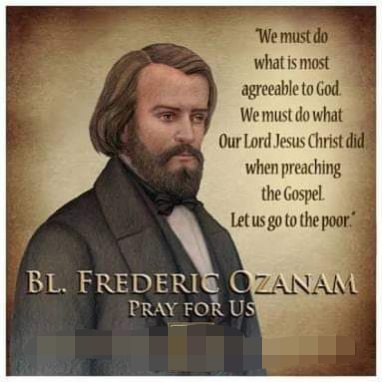 Lord, we are grateful for the many gifts and blessings we ask and receive, when it is in accordance with your Holy Will. We thank you for granting the grace of a miracle through the intercession of Blessed Frédéric Ozanam.

May the Church proclaim his holiness, as a saint, acclaiming him as a providential light for today’s world.We make this prayer through Jesus Christ, our Lord. Amen 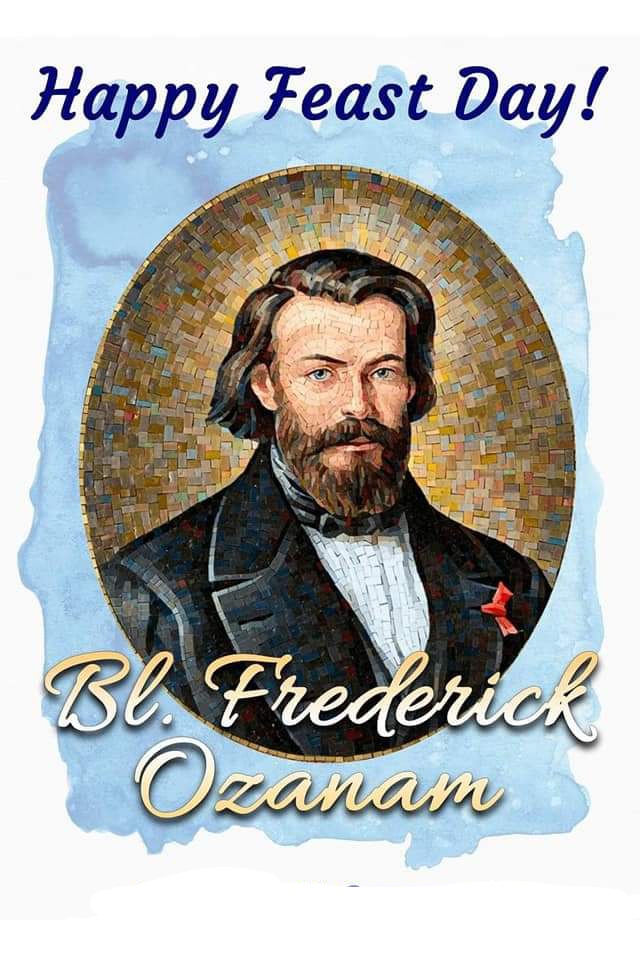 Blessed Frédéric Ozanam, pray for us.