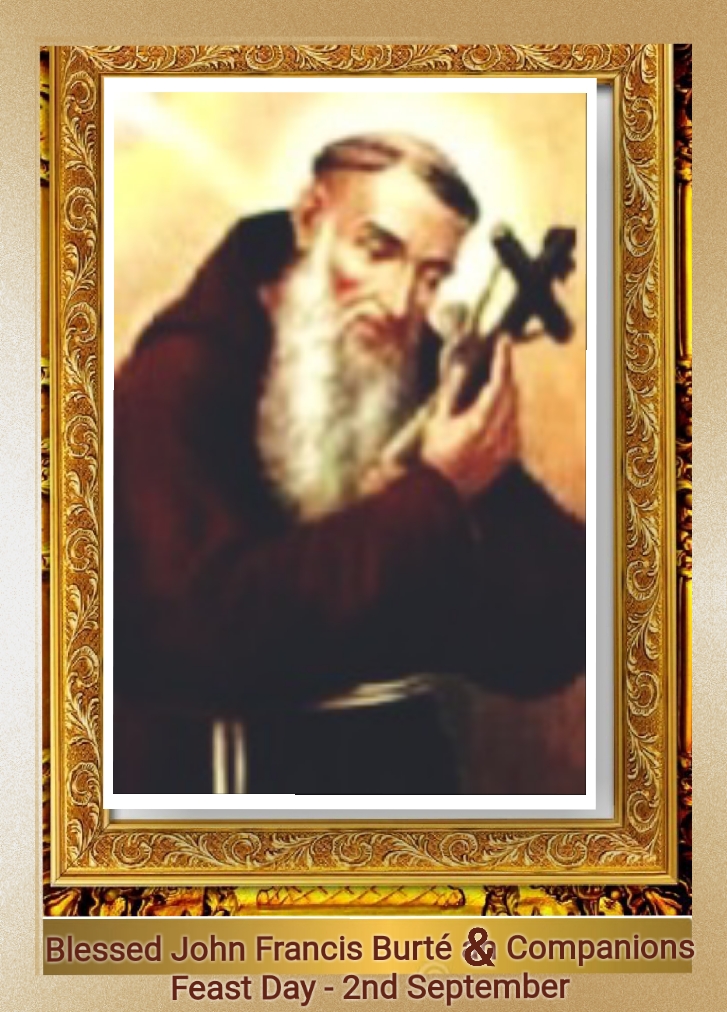 Blessed John Burte (Died 1792) was one among as many as 191 Bishops, Priests, Religious and other secular victims, martyred during the French Revolution. Their deaths became known as the September Carmelite Massacre of 1792. All were imprisoned in a Church attached to a Carmelite Monastery in Paris for refusing to disown their faith and take an oath of allegiance to the de-Christianizing Revolution.

Practically every page in the history of the French Revolution is stained with blood. The Carmelite Massacre of 1792, added nearly 200 victims to this noble company of martyrs. They were all priests, secular and religious, who refused to take the schismatic oath and had been imprisoned in the church attached to the Carmelite monastery in Paris. Among these priests were a Conventual, a Capuchin, and a member of the Third Order Regular. These priests were victims of the French Revolution.

Though their martyrdom spans a period of several years, they stand together in the Church’s memory because they all gave their lives for the same principle. The Civil Constitution of the Clergy (1791) required all priests to take an oath which amounted to a denial of the faith. Each of these men refused and was executed.

John Francis Burte was born in the town of Rambervillers in Lorraine. At the age of 16, he joined the Franciscans at Nancy and there he also pronounced his solemn vows. In due time he has ordained a priest and for some time taught theology to the younger members of the order. He was at one time also superior of his convent.

After Pope Clement XIV, formerly a Conventual friar had ordered the merging of the province of the Franciscans, to which John Francis belonged, with the Conventuals, Father John Francis was placed in charge of the large convent in Paris and encouraged his brethren to practice the strict observance of the rule. His zeal for souls was outstanding, and he zealously guarded the rights of the Church in this troubled period of history. 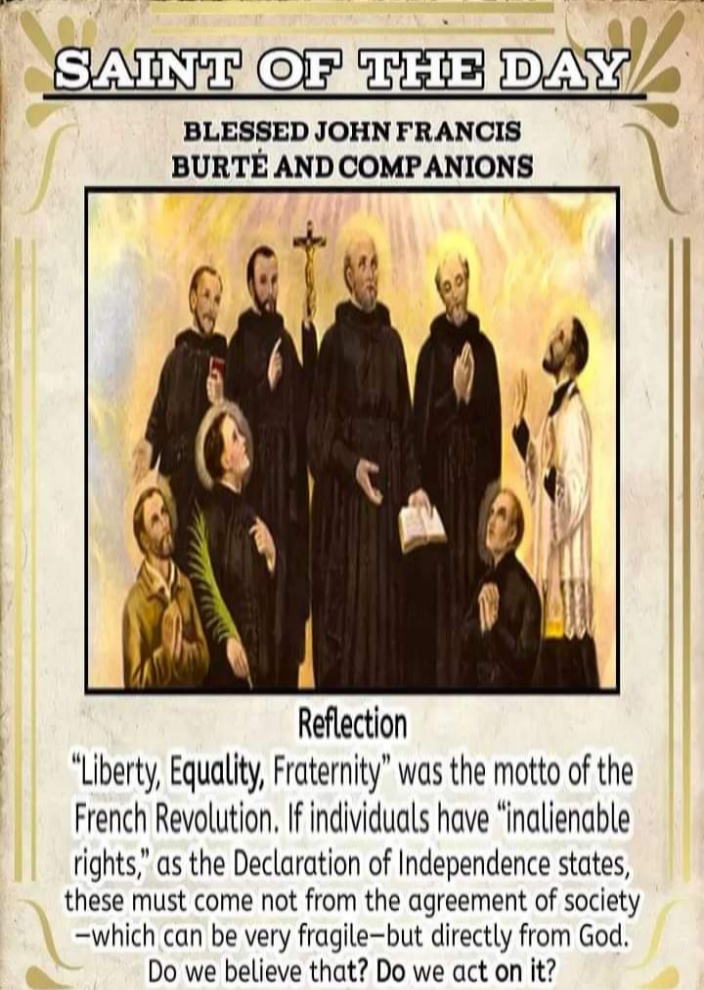 When the French Revolution broke out, he was reported for permitting his priests to exercise their functions after they refused to take the infamous oath required by the government, and which was a virtual denial of their Faith. He was arrested and held captive with other priests in the convent of the Carmelites. His constancy in refusing to take the sacrilegious oath won for him a cruel martyrdom on September 2, 1792.

Acquiring a reputation as an excellent preacher, confessor, and instructor of clerics, Apollinaris of Posat was preparing to go East as a missionary. He was in Paris studying Oriental languages when the French Revolution began. Refusing the oath, he was swiftly arrested and detained in the Carmelite convent.

Born John James Morel before his entrance into religion, he was born near Fribourg in Switzerland in 1739 and received his education from the Jesuits. In 1762 he joined the Capuchins in Zug and before long became a prominent preacher, a much-sought confessor, and an eminent instructor of the young clerics of the order. He impressed on their minds the truth that piety and learning are the two eyes of a priest, and humility was a dominating virtue in his life. He suffered a cruel martyrdom on September 2, 1792.

He was born at Rouen in Normandy, and early in life joined the Third Order Regular of St. Francis. Because of his eminent mental gifts, he was chosen a superior of his order. In the exercise of his priestly duties, he displayed a marked zeal for souls, and as chaplain of the convent of St. Elizabeth in Paris, he was a prudent director in the ways of religious perfection.

He was also summoned to take the civil oath, and upon his refusal to do this he was seized and confined in the Carmelite convent where so many other confessors of Christ were being detained. On September 2, while he was saying his Office in the convent garden, the raving assassins made him the first victim of their cruel slaughter.

These three members of the Franciscan Order, together with 182 other servants of God who suffered martyrdom at this time, were solemnly beatified by Pope Pius XI, and the Franciscan Order was granted permission to celebrate their feast annually with an Office and special Mass.

These three plus 182 others—including several bishops and many religious and diocesan priests—were massacred at the Carmelite house in Paris on September 2, 1792. They were beatified in 1926, John Baptist Triquerie, born in 1737, entered the Conventual Franciscans. He was chaplain and confessor of Poor Clare monasteries in three cities before he was arrested for refusing to take the oath. He and 13 diocesan priests were guillotined in Laval on January 21, 1794. He was beatified in 1955.

“Liberty, Equality, Fraternity” was the motto of the French Revolution. If individuals have “inalienable rights,” as the Declaration of Independence states, these must come not from the agreement of society (which can be very fragile/ mutable/ mercurial/ fickle/ ephemeral/ illusory) but directly from God, which the Declaration also declares with certitude and religious conviction to be the case for the United States. At least we started out that way.

“The upheaval which occurred in France toward the close of the 18th century wrought havoc in all things sacred and profane and vented its fury against the Church and her ministers. Unscrupulous men came to power who concealed their hatred for the Church under the deceptive guise of philosophy…. It seemed that the times of the early persecutions had returned. The Church, a spotless bride of Christ, became resplendent with bright new crowns of martyrdom” (Acts of Martyrdom).

Bl. John Francis Burte, you and your companions of martyrs stood staunchly and faithfully defending the Faith, in the face of inevitable death. You all proved yourselves loyal followers of Christ, worthy of the crown of martyrdom.

Pray for us that we will remain loyal to our faith and share it with our community and touch as many hearts as we can. Amen 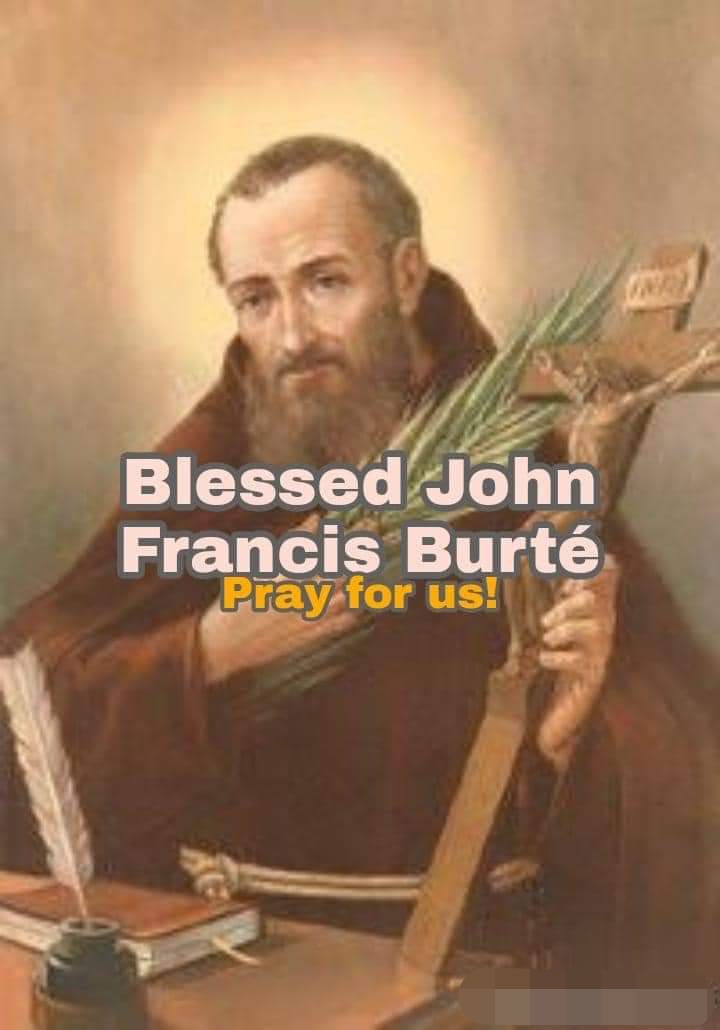