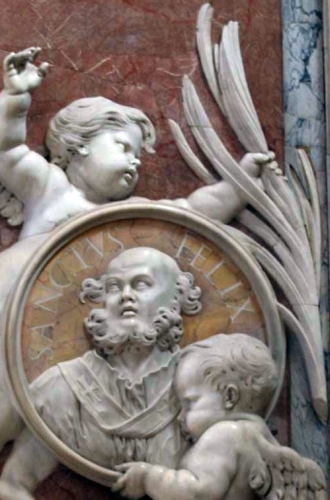 Saint Felix I, a Roman, (died Dec. 30, 274, Rome;), was Pope from 269 to 274. Elected to succeed St. Dionysius, Felix was the author of an important dogmatic letter on the unity of Christ’s Person. He received the emperor Aurelian’s aid in settling a theological dispute between the anti-Trinitarian Paul of Samosata, the deposed bishop of Antioch, and the orthodox Domnus, Paul’s successor. Some claim Felix was buried in the basilica he built on the Via Aurelia; others believe he was buried in the catacomb of St. Calixtus and mistakenly called a martyr.

The notice about Felix in the Liber Pontificalis ascribes to him a decree that Masses should be celebrated on the tombs of martyrs. The author of this entry was evidently alluding to the custom of celebrating Mass privately at the altars near or over the tombs of the martyrs in the crypts of the catacombs.

The solemn celebration always took place in the basilicas built over the catacombs. This practice, still in force at the end of the fourth century, dates apparently from the period when the great cemeterial basilicas were built in Rome, and owes its origin to the solemn commemoration services of martyrs, held at their tombs on the anniversary of their burial, as early as the third century.

According to the notice in the Liber Pontificalis, Felix erected a basilica on the Via Aurelia; the same source also adds that he was buried there. The latter detail is evidently an error, for the fourth-century Roman calendar of feasts says that Pope Felix was interred in the Catacomb of Callixtus on the Via Appia. The statement of the Liber Pontificalis concerning the pope’s martyrdom results obviously from a confusion with a Roman martyr of the same name buried on the Via Aurelia, and over whose grave a church was built.

In the Roman calendar of feasts, referred to above, the name of Felix occurs in the list of Roman bishops.
According to the above-mentioned detail of the Depositio episcoporum, Felix was interred in the catacomb of Callixtus on 30 December, in the Roman dating system. Saint Felix I is mentioned as Pope and Martyr, with a simple feast, on 30 May.

According to more recent studies, the oldest liturgical books indicate that the saint honoured on 30 May was a little-known martyr buried on the Via Aurelia, who was mistakenly identified with Pope Felix I, an error similar to but less curious than the identification in the liturgical books, until the mid-1950s, of the martyr saint celebrated on 30 July with the antipope Felix II. Pope Felix I celebrated Masses over the tombs that guarded the relics of the Christian martyrs, and strongly defended the doctrines of the Trinity of God and the Incarnation of the Word.

Eternal Shepherd, look with favour upon your flock. Safeguard and shelter it forevermore through the intercession of blessed Felix, your Supreme Pontiff, whom you appointed as shepherd of the whole Church.

Saint Felix I never compromised the laws of the Church, constituting it the law of God, and we pray that our faith too, is strengthened to uphold your Name and preach and spread your Holy Word, through Christ our Lord. Amen 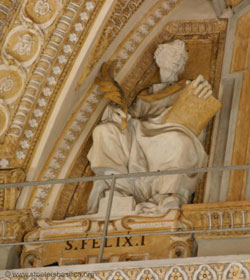 Pope Saint Felix I, pray for us…