Adela of Normandy, of Blois, or of England (c. 1067 – 8 March 1137), was a daughter of William the Conqueror and Matilda of Flanders who later became the countess of Blois, Chartres, and Meaux by marriage to Stephen II of Blois. She was regent of Blois during the absence of her spouse in 1096–1100 and 1101–02, and during the minority of her son from 1102 until 1120. Adela was the mother of King Stephen of England and Bishop Henry of Winchester.

Adela was born after her father’s accession to the English throne, between 1066 and 1070.[1] Her royal blood marked her as noble in the eyes of her peers. She was the favorite sister of King Henry I of England, and they were probably the youngest of the Conqueror’s children. Adela was a high-spirited and educated woman, with a knowledge of Latin. She had three older brothers and one younger, and thus she would not inherit her father’s honors, but her bloodline would be a valuable asset to any suitor.

Adela married Stephen Henry, son and heir to the count of Blois, between 1080 and 1083, around her fifteenth birthday. Stephen was nearly twenty years her senior. Stephen inherited Blois, Chartres and Meaux upon his father’s death in 1089, as well as lands and right in parts of Berry and Burgundy. Adela and her husband’s relationship was based on trust and mutual respect, if not affection and she made decisions along with Stephen. She swore, for instance, to bind herself and her husband to protect the bishop of Chartres, then in a dispute with the king of France.

Stephen-Henry joined the First Crusade in 1096, along with his brother-in-law Robert Curthose. His letters to Adela form a uniquely intimate insight into the experiences of the Crusade’s leaders and show that he trusted Adela to rule as regent while he was on crusade. Adela filled in as regent for her husband during his extended absence as a leader of the First Crusade (1095–1098) as well as during his second expedition in 1101.

This included granting monks the right to build new churches, as well as other charters. Adela also worked with Ivo of Chartres at various points, exchanging letters throughout her regency to discuss matters such as the control of misbehaving nuns and larger issues such as disputes about sworn oaths. While her husband was away, Adela would continue to tour their lands, settling disputes, promoting economic growth, and even commanding knights to go to battle with the king.

The Count of Blois returned to France in 1100 bringing with him several cartloads of maps, jewels and other treasures, which he deposited at Chartres. When he abandoned the First Crusade returning to France in ignominy, Adela constantly berated him, urging him to return to the Holy Land. He was under an obligation to the pope for agreements made years earlier and returned to Antioch to participate in the crusade of 1101. He was ultimately killed in a last stand after the Battle of Ramla in 1102.

Adela continued to act as regent after her husband’s death and through her son Thibaud’s early rule until her retirement in 1120. Even after Thibaud came of age and no longer needed a regent, Adela continued to issue charters and act as co-ruler of many parts of their land. Adela did not secure a marriage alliance for Thibaud, who did not get married until after Adela’s retirement, which helped to maintain her power and influence over her son and her lands.

Adela, a devout Benedictine sympathizer, employed several high-ranking tutors to educate her children. Her youngest son, Henry, was conceived during the single year Stephen was in France between crusading duties. At two years of age Henry was pledged to the Church at Cluny Abbey, Saône-et-Loire, France, as an oblate child, that is, he was dedicated to the service of God, according to medieval practice. Henry went on to be appointed Abbot of Glastonbury and Bishop of Winchester. He sponsored hundreds of constructions including bridges, canals, palaces, forts, castles, villages, as well as dozens of abbeys and chapels and sponsored books including the treasured Winchester Bible.

In 1105, after St Anselm visited her during a sickness, she was responsible for communicating the archbishop’s earnestness in threatening excommunication to her brother Henry I. Orderic Vitalis praises her as a “wise and spirited woman” who ably governed her husband’s estates and her own. Adela’s power and interests are reflected in letters collected, which demonstrate her religiosity and intellect. She made sure to mark her place as a woman, tying herself her late husband and her sons.

In disagreement with her eldest son William, she appointed his younger brother Theobald to replace him as heir in 1107. Her son, Stephen of Blois, moved to London in 1111 to the court of his uncle, King Henry I becoming his favorite. Upon Beauclerc’s death in Normandy (1135), Stephen seized the English throne from Holy Roman Empress Dowager Matilda, King Henry I’s daughter, whom the monarch had named as his successor, leading to a civil war in England lasting twenty years.

Adela retired to Marcigny Convent in 1120. Though she may have considered retiring to an abbey in Normandy where members of her family, including sisters and nieces, may have already been living, Adela was drawn to and chose the larger, more prestigious convent at Marcigny near her son Henry at Cluny Abbey. Adela may have acted as prioress within the community at Marcigny, though this is not certain.

She continued to communicate with her children and the ecclesiastical leaders of lands that she had once ruled, maintaining her influence over the area. In one instance, Adela sent letters to both her son Thibaud and Geoffrey, bishop of Chartres, reminding them of her settlement of a monastic case. In these letters, she reminds her son how his father and she felt about alms gifting to monasteries. In 1102, her daughter Lucia-Mahaut drowned in the wreck of the White Ship alongside her husband.

Adela lived long enough to see her son Stephen on the English throne. She likely took pride in the ascension of her youngest child, Henry of Blois, to the bishopric of Winchester in 1129. After her death in 1137 at Marcigny, prayers were offered at a number of churches that she had endowed personally or had recognized at some point during her life. Her money, influence, and entry into the convent resulted in Adela becoming a saint of the Catholic Church. Her feast is 24 February. Deeply religious, she supported scholars and poets, endowed abbeys and churches, expanding and preserving culture and art of her time.

Called by historians “the heroine of the First Crusade,” Adela is considered a generous patron of poets and writers, inviting them to her court and rewarding them amply for their works. Adela lived as a number in the convent in prayer and humility until her death in 1137.

Eternal God, you gave us Saint Adela as an excellent example of how people with money and power can use these to advance the Kingdom of God. We may not have as much money and power as she did, but what we have we can use to help others learn about and follow Jesus, our Savior.

Help us to emulate her generosity of spirit and gentle yet firm determination to provide aid to our brothers in Christ whenever needed, to advance our salvation in Jesus’ Name. Amen 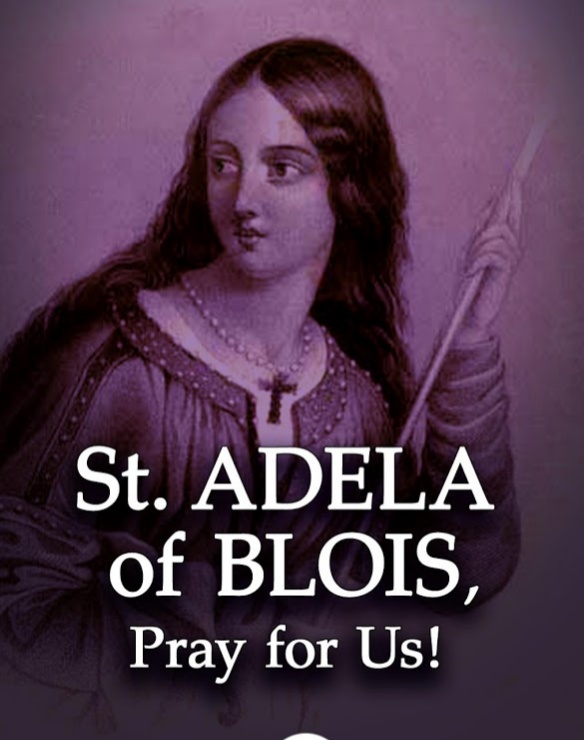 Saint Adela of Normandy, pray for us.