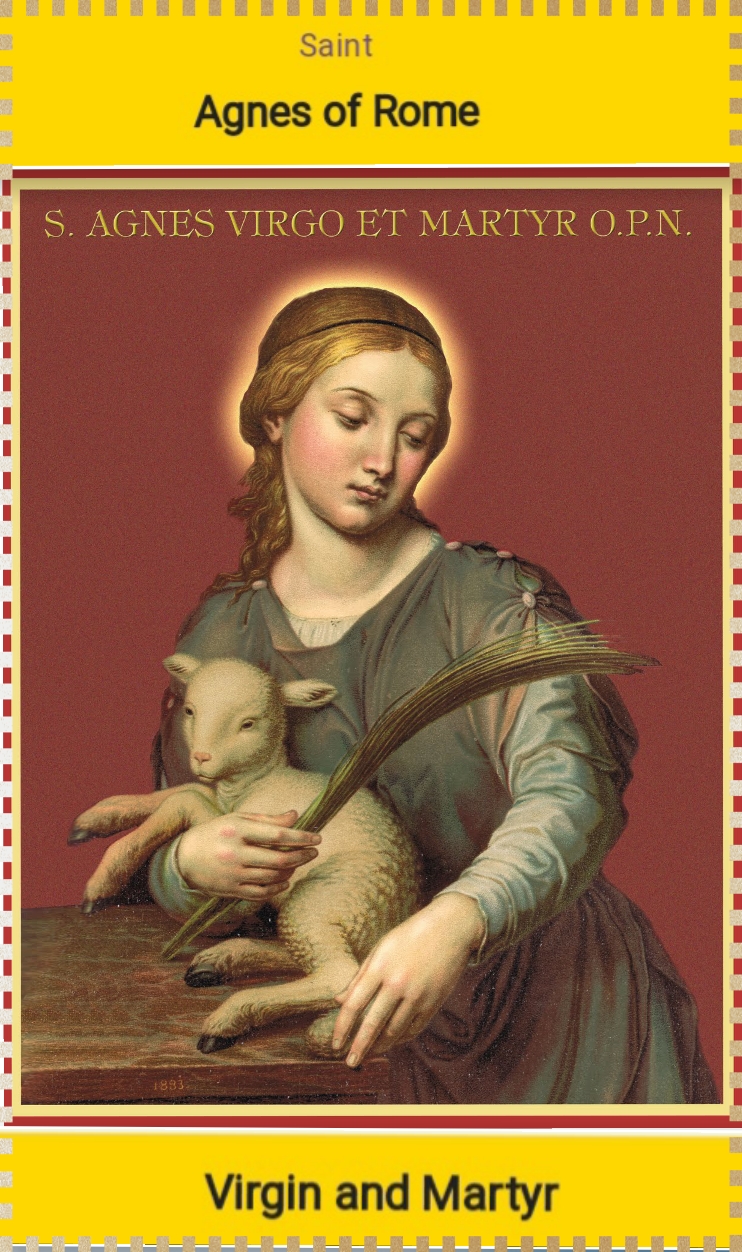 Agnes of Rome (c.  291 – c.  304) is a virgin martyr, venerated as a saint in the Roman Catholic Church, and Eastern Orthodox Church. St. Agnes is one of several virgin martyrs commemorated by name in the Canon of the Mass. She is, among other patrocinies, a patron saint of virgins, girls and chastity. Saint Agnes’ feast day is 21 January. The circumstances of her martyrdom are believed to be authentic, though the legend cannot be proven true, and many details of the fifth century Acts of Saint Agnes are open to criticism.

According to tradition, Agnes was a member of the Roman nobility, born in AD 291 and raised in an early Christian family. She suffered martyrdom at the age of twelve or thirteen, during the reign of the Roman emperor Diocletian, on 21 January 304. A beautiful young girl from a wealthy family, Agnes had many suitors of high rank, and the young men, slighted by her resolute devotion to religious purity, submitted her name to the authorities as a follower of Christianity.

The Prefect Sempronius condemned Agnes to be dragged naked through the streets to a brothel. In one account, as she prayed, her hair grew and covered her body. It was also said that all of the men that attempted to rape her were immediately struck blind. The son of the prefect was struck dead but revived after she prayed for him, causing her release. There commenced a trial from which Sempronius excused himself, allowing another figure to preside and sentence Agnes to death. She was led out and bound to a stake, but the bundle of wood would not burn, whereupon the officer in charge of the troops drew his sword and beheaded her, or, in some other texts, stabbed her in the throat. It is said that her blood poured to the stadium floor where other Christians soaked it up.

Agnes was buried beside the Via Nomentana in Rome. A few days after her death, her foster-sister, Emerentiana, was found praying by her tomb; she claimed to be the daughter of Agnes’ wet nurse, and was stoned to death after refusing to leave the place and reprimanding the pagans for killing her foster-sister. Emerentiana was also later canonised. The daughter of Constantine I, Constantina, was said to have been cured of leprosy after praying at Agnes’ tomb. She and Emerentiana appear in the scenes from the life of Agnes on the 14th-century Royal Gold Cup in the British Museum.

An early account of Agnes’ death, stressing her young age, steadfastness and virginity, but not the legendary features of the tradition, is given by Ambrose. Agnes was venerated as a saint at least as early as the time of St Ambrose, based on an existing homily. She is commemorated in the Depositio Martyrum of Filocalus and in the early Roman Sacramentaries. Saint Agnes’ bones are conserved beneath the high altar in the church of Sant’Agnese fuori le mura in Rome, built over the catacomb housing her tomb. Her skull is preserved in a separate chapel in the church of Sant’Agnese in Agone, Rome.

Because of the legend around her martyrdom, Saint Agnes is patron saint of those seeking chastity and purity. She is also the patron saint of young girls and girl scouts. Folk custom called for them to practise rituals on Saint Agnes’ Eve (20–21 January) with a view to discovering their future husbands. This superstition has been immortalised in John Keats’s poem, The Eve of Saint Agnes. On the feast of Saint Agnes two lambs are traditionally brought from the Trappist abbey of Tre Fontane in Rome, to be blessed by the Pope. In summer the lambs are shorn, and the wool used to weave the pallia which the pope gives on the feast of Saint Peter and Paul to newly appointed metropolitan archbishops as a sign of his jurisdiction and their union with the pope. This tradition of the blessing of the lambs has been known since the 16th century.

O Little St. Agnes, so young and yet strengthened with wisdom by the power of God, we seek protection of all the young people of every place, whose goodness and purity are threatened by the evils and impurities of this world.

Help them to find true Christian friends and to be strong to resist temptation. May they find safe pastures in the Good Shepherd’s Church and in her holy sacraments and may you lead us to the wedding banquet of heaven to rejoice with you and all the holy virgin martyrs in Christ who lives and reigns forever. Amen 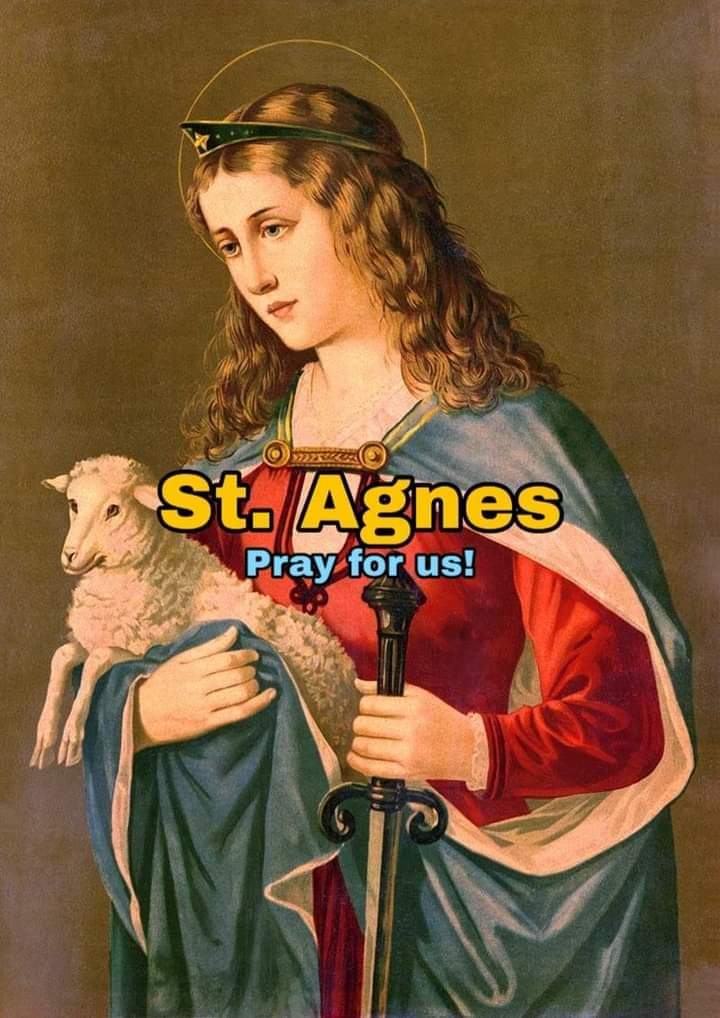