FEAST OF SAINT BEDE THE VENERABLE – 25th MAY 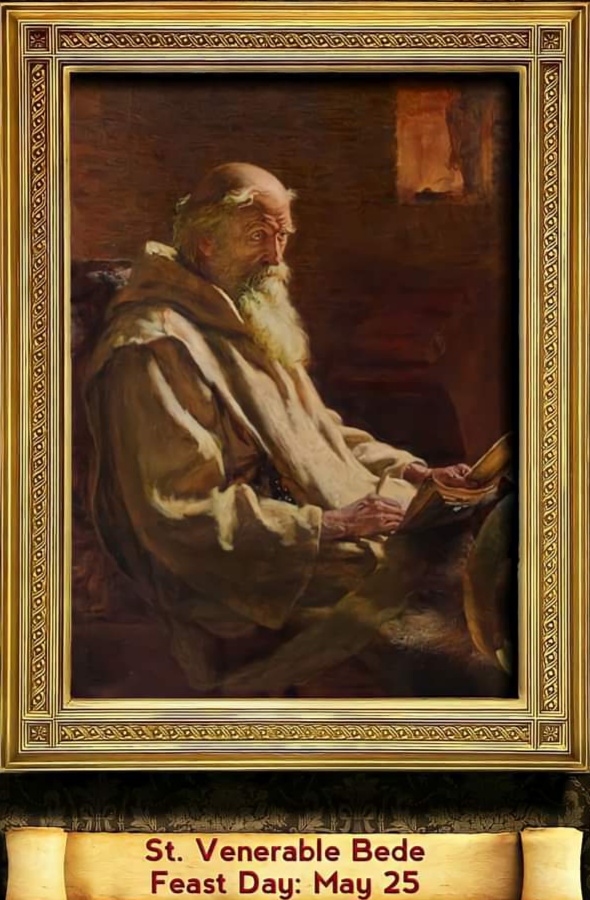 FEAST OF SAINT BEDE, THE VENERABLE
FEAST DAY – 25th MAY

Bede (672/3 – 26 May 735), also known as Saint Bede, The Venerable Bede, and Bede the Venerable, was an English monk at the monastery of St. Peter and its companion monastery of St. Paul in the Kingdom of Northumbria of the Angles (contemporarily Monkwearmouth–Jarrow Abbey in Tyne and Wear, England).

Bede was sent to Monkwearmouth at the age of seven and later joined Abbot Ceolfrith at Jarrow. Both of them survived a plague that struck in 686 and killed a majority of the population there. While Bede spent most of his life in the monastery, he travelled to several abbeys and monasteries across the British Isles, even visiting the archbishop of York and King Ceolwulf of Northumbria.

He was an author, teacher and scholar, and his most famous work, Ecclesiastical History of the English People, gained him the title “The Father of English History”. His ecumenical writings were extensive and included a number of Biblical commentaries and other theological works of exegetical erudition. Another important area of study for Bede was the academic discipline of computus, otherwise known to his contemporaries as the science of calculating calendar dates.

One of the more important dates Bede tried to compute was Easter, an effort that was mired in controversy. He also helped popularize the practice of dating forward from the birth of Christ (Anno Domini – in the year of our Lord), a practice which eventually became commonplace in medieval Europe.

Bede was one of the greatest teachers and writers of the Early Middle Ages and is considered by many historians to be the most important scholar of antiquity for the period between the death of Pope Gregory I in 604 and the coronation of Charlemagne in 800. In 1899, Pope Leo XIII declared him a Doctor of the Church.

He is the only native of Great Britain to achieve this designation; Anselm of Canterbury, also a Doctor of the Church, was originally from Italy. Bede was moreover a skilled linguist and translator, and his work made the Latin and Greek writings of the early Church Fathers much more accessible to his fellow Anglo-Saxons, which contributed significantly to English Christianity.

Bede’s monastery had access to an impressive library which included works by Eusebius, Orosius, and many others. Almost everything that is known of Bede’s life is contained in the last chapter of his Ecclesiastical History of the English People, a history of the church in England. It was completed in about 731, and Bede implies that he was then in his fifty-ninth year, which would give a birth date in 672 or 673.

Bede says nothing of his origins, but his connections with men of noble ancestry suggest that his own family was well-to-do. Bede’s first abbot was Benedict Biscop, and the names “Biscop” and “Beda” both appear in a list of the kings of Lindsey from around 800, further suggesting that Bede came from a noble family. Bede’s name reflects West Saxon Bīeda (Northumbrian Bǣda, Anglian Bēda).

Monkwearmouth’s sister monastery at Jarrow was founded by Ceolfrith in 682, and Bede probably transferred to Jarrow with Ceolfrith that year. The dedication stone for the church has survived as of 1969; it is dated 23 April 685, and as Bede would have been required to assist with menial tasks in his day-to-day life it is possible that he helped in building the original church. In 686, plague broke out at Jarrow.

The Life of Ceolfrith, written in about 710, records that only two surviving monks were capable of singing the full offices; one was Ceolfrith and the other a young boy, who according to the anonymous writer had been taught by Ceolfrith. The two managed to do the entire service of the liturgy until others could be trained. The young boy was almost certainly Bede, who would have been about 14. 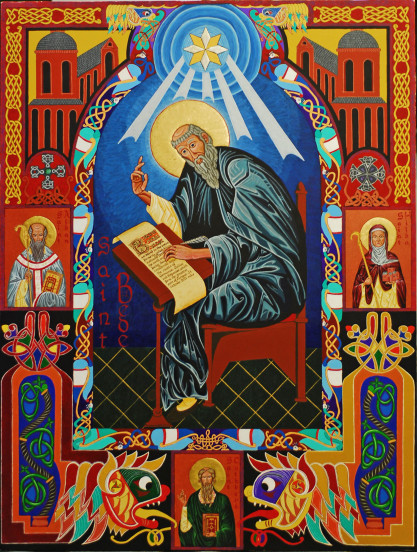 When Bede was about 17 years old, Adomnán, the abbot of Iona Abbey, visited Monkwearmouth and Jarrow. Bede would probably have met the abbot during this visit, and it may be that Adomnán sparked Bede’s interest in the Easter dating controversy. In about 692, in Bede’s nineteenth year, Bede was ordained a deacon by his diocesan bishop, John, who was bishop of Hexham.

The canonical age for the ordination of a deacon was 25. In Bede’s thirtieth year (about 702), he became a priest, with the ordination again performed by Bishop John. In about 701 Bede wrote his first works, the De Arte Metrica and De Schematibus et Tropis; both were intended for use in the classroom. He continued to write for the rest of his life, eventually completing over 60 books, most of which have survived.

Not all his output can be easily dated, and Bede may have worked on some texts over a period of many years. His last surviving work is a letter to Ecgbert of York, a former student, written in 734. A 6th-century manuscript of Acts of the Apostles that is believed to have been used by Bede survives and is now in the Bodleian Library at University of Oxford; it is known as the Codex Laudianus.

Bede enjoyed music and was said to be accomplished as a singer and as a reciter of poetry. As a monk, Bede gave absolute priority to prayer, fasting and charitable hospitality. He regarded all other works as valueless without the love of God and neighbor. However, Bede also possessed astounding intellectual gifts, which he used to survey and master a wide range of subjects according to an all-encompassing vision of Christian scholarship.

Bede declined a request to become abbot of his monastery. Instead, he concentrated on writing, and produced more than 45 books – primarily about theology and the Bible, but also on science, literature, and history. He also taught hundreds of students at the monastery and its school, which became renowned throughout Britain.

During Bede’s own lifetime, his spiritual and intellectual gifts garnered wide recognition. His writings on scripture were considered so authoritative that a Church council ordered them to be publicly read in English churches. Some of the most illustrious members of English society made pilgrimages to his monastery to seek his guidance, and he was personally invited to Rome by Pope Sergius.

Bede, however, was unfazed by these honors. Perhaps inspired by the Benedictine monastic ethos, which emphasizes one’s absolute commitment to the monastic community, he chose not to visit Rome, or to travel any significant distance beyond the Monastery of Sts. Peter and Paul in Jarrow, during his entire adult life.

Instead, the world came to him – through the visitors he received, according to the Benedictine tradition of hospitality, and through his voluminous reading. And Bede, in turn, reached the world without leaving his monastery, writing books that were copied with reverence for centuries and still read today. He is one of the last Western Christian writers to be numbered among the Church Fathers.

But Bede understood that love, rather than learning, was his life’s purpose. “It is better,” he famously said, “to be a stupid and uneducated brother who, working at the good things he knows, merits life in heaven, than to be one who – though being distinguished for his learning in the Scriptures, or even holding the place of a teacher – lacks the bread of love.”

Bede died on the vigil of the feast of the Ascension of Christ in 735, saying his favorite prayer, “Glory be to the Father and to the Son and to the Holy Spirit. As in the beginning, so now and forever”.

His feast day was included in the General Roman Calendar in 1899, for celebration on 27 May rather than on his date of death, 26 May, which was then the feast day of St. Augustine of Canterbury. He is venerated in the Catholic Church, with a feast day of 25 May, and is remembered in the Church of England with a Lesser Festival on 25 May.

O God, Who didst glorify Thy Church by the learning of blessed Bede,Thy Confessor and Doctor, mercifully grant to Thy servants ever to be enlightened by his wisdom, and helped by his merits.

Through Lord Jesus Christ, Who liveth and reigneth with Thee in the unity of the Holy Ghost, world without end. Amen 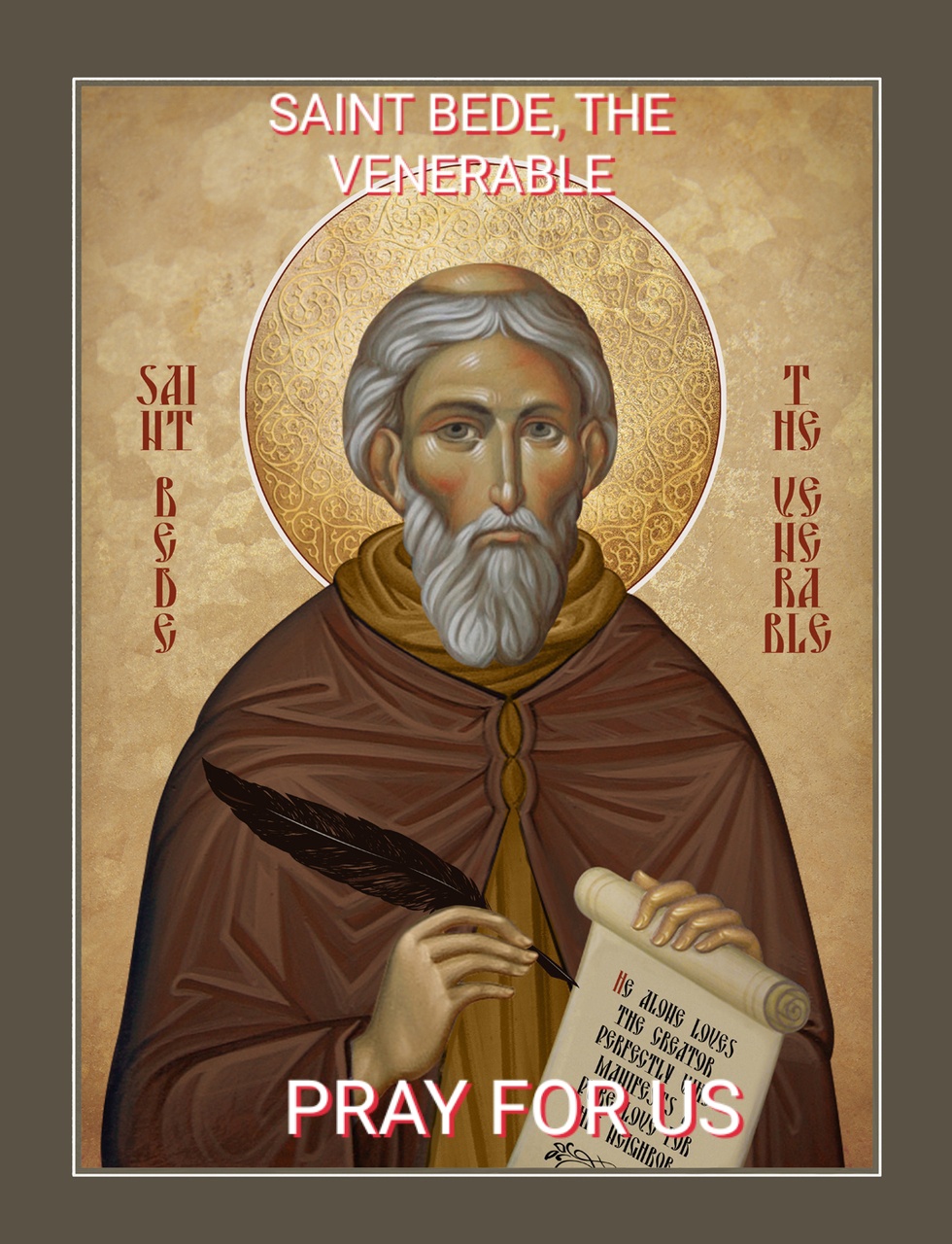 Saint Bede the Venerable, pray for us.