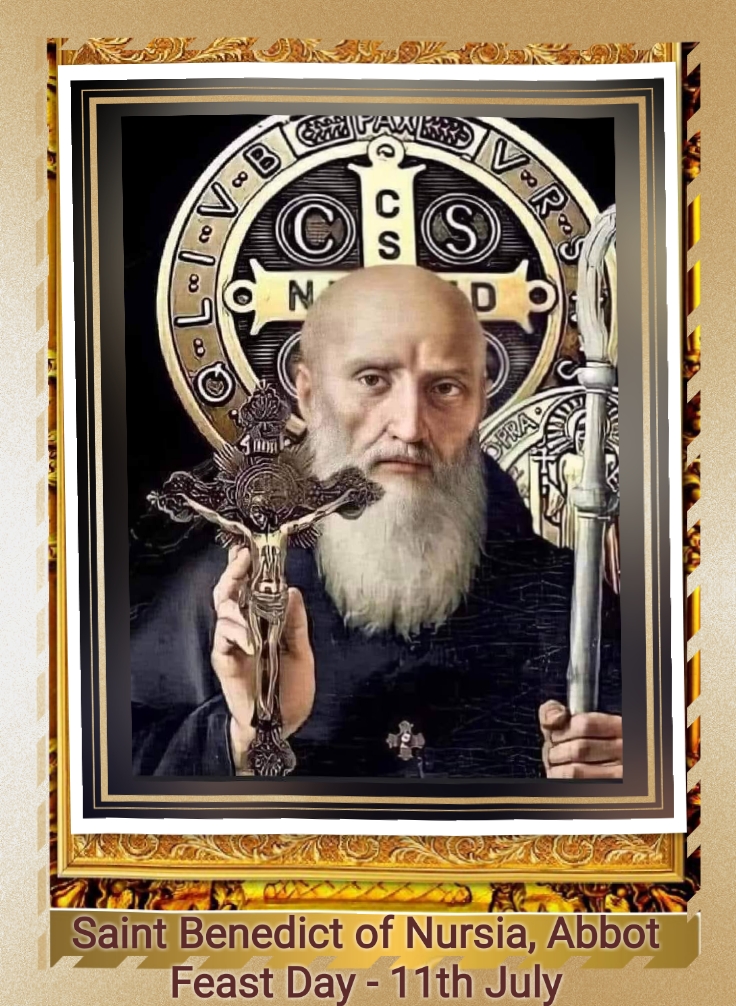 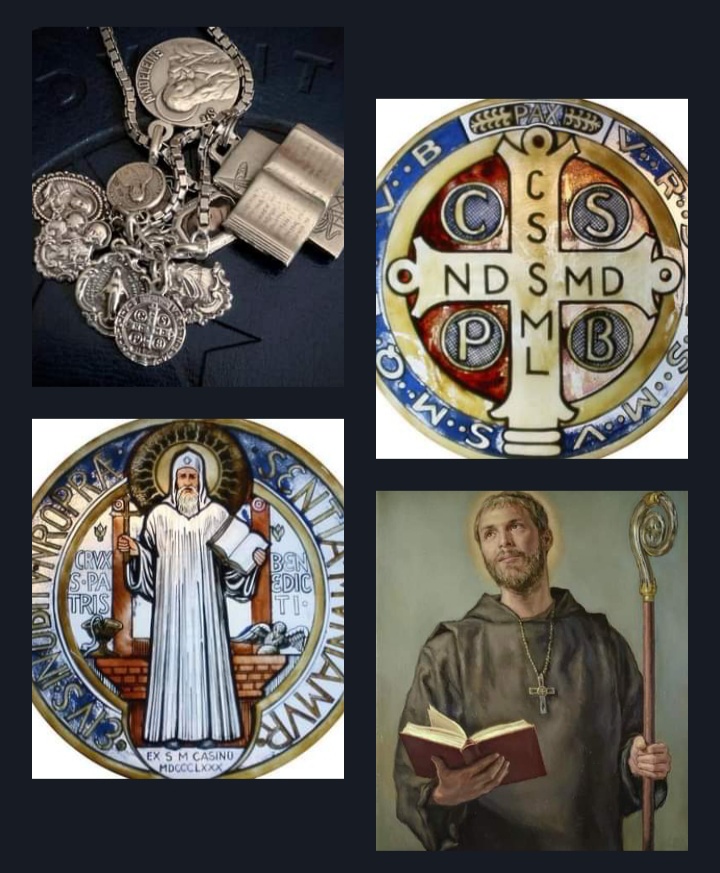 Benedict of Nursia OSB (2 March 480 AD – 21 March 548 AD) was a Christian saint venerated in the Catholic Church, the Eastern Orthodox Church, the Oriental Orthodox Churches, the Anglican Communion and Old Catholic Churches. Benedict founded twelve communities for monks at Subiaco,, Italy (about 65 kilometres to the east of Rome), before moving to Monte Cassino in the mountains of central Italy.

The Order of Saint Benedict is of later origin and, moreover, not an “order” as commonly understood but merely a confederation of autonomous congregations. Benedict’s main achievement, his “Rule of Saint Benedict”, contains a set of rules for his monks to follow.

Heavily influenced by the writings of John Cassian, it shows strong affinity with the Rule of the Master, but it also has a unique spirit of balance, moderation and reasonableness, which persuaded most Christian religious communities founded throughout the Middle Ages to adopt it. As a result, his Rule became one of the most influential religious rules in Western Christendom.

For this reason, Giuseppe Carletti regarded Benedict as the founder of Western Christian monasticism. Apart from a short poem attributed to Mark of Monte Cassino, the only ancient account of Benedict is found in the second volume of Pope Gregory I’s four-book Dialogues, thought to have been written in 593, although the authenticity of this work is disputed.

Gregory’s account of Benedict’s life is not, however, a biography in the modern sense of the word. It provides instead a spiritual portrait of the gentle, disciplined abbot. In a letter to Bishop Maximilian of Syracuse, Gregory states his intention for his Dialogues, saying they are a kind of floretum (an anthology, literally, ‘flowers’) of the most striking miracles of Italian holy men. 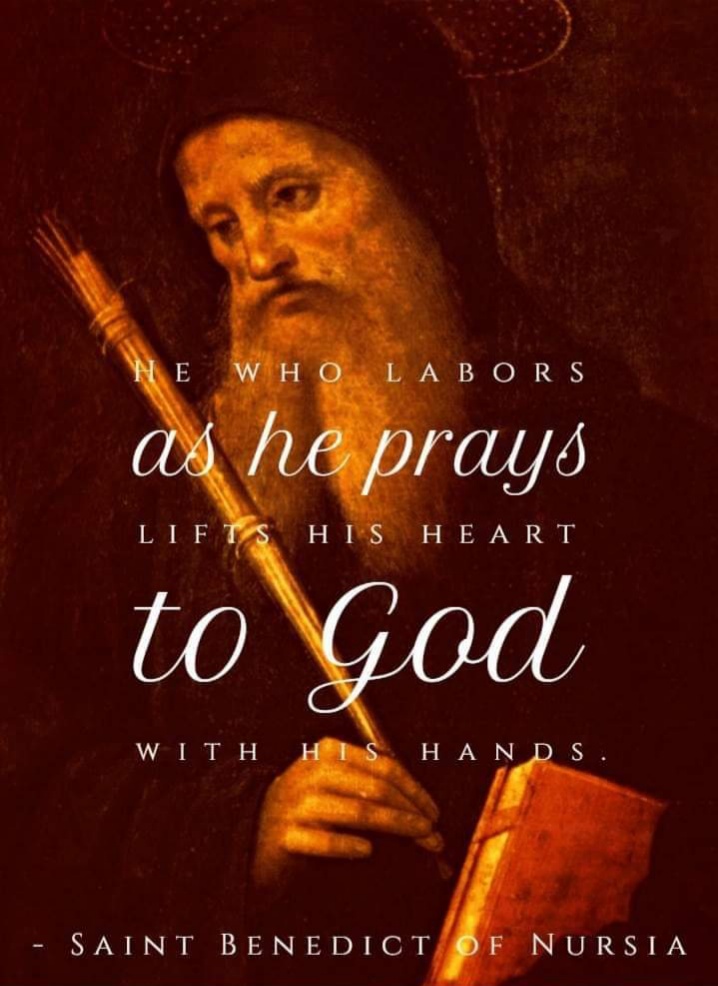 Gregory did not set out to write a chronological, historically anchored story of Benedict, but he did base his anecdotes on direct testimony. To establish his authority, Gregory explains that his information came from what he considered the best sources: a handful of Benedict’s disciples who lived with him and witnessed his various miracles.

These followers, he says, are Constantinus, who succeeded Benedict as Abbot of Monte Cassino, Honoratus, who was abbot of Subiaco when St Gregory wrote his Dialogues, Valentinianus, and Simplicius. In Gregory’s day, history was not recognised as an independent field of study; it was a branch of grammar or rhetoric, and historia was an account that summed up the findings of the learned when they wrote what was, at that time, considered history.

Gregory’s Dialogues, Book Two, then, an authentic medieval hagiography cast as a conversation between the Pope and his deacon Peter, is designed to teach spiritual lessons. He was the son of a Roman noble of Nursia, the modern Norcia, in Umbria. A tradition which Bede accepts makes him a twin with his sister Scholastica.

If 480 is accepted as the year of his birth, the year of his abandonment of his studies and leaving home would be about 500. Gregory’s narrative makes it impossible to suppose him younger than 20 at the time. Benedict was sent to Rome to study, but was disappointed by the life there. He does not seem to have left Rome for the purpose of becoming a hermit, but only to find some place away from the life of the great city.

He took his old nurse with him as a servant and they settled down to live in Enfide. Enfide, which the tradition of Subiaco identifies with the modern Affile, is in the Simbruini mountains, about forty miles from Rome and two miles from Subiaco. A short distance from it is the entrance to a narrow, gloomy valley, penetrating the mountains and leading directly to Subiaco. 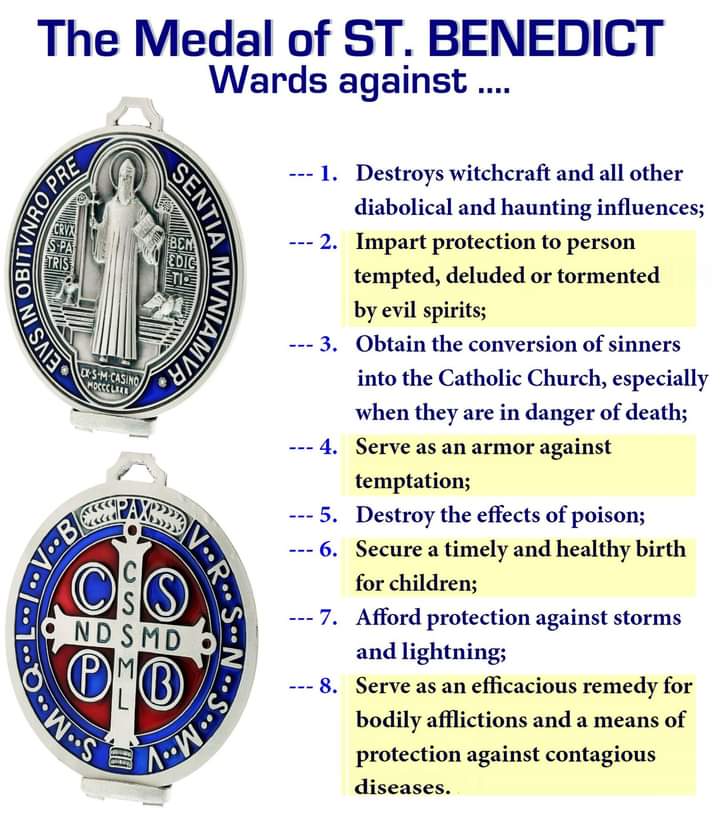 The path continues to ascend, and the side of the ravine, on which it runs, becomes steeper, until a cave is reached above which the mountain now rises almost perpendicularly; while on the right, it strikes in a rapid descent down to where, in Benedict’s day, 500 feet (150 m) below, lay the blue waters of a lake.

The cave has a large triangular-shaped opening and is about ten feet deep. On his way from Enfide, Benedict met a monk, Romanus of Subiaco, whose monastery was on the mountain above the cliff overhanging the cave. Romanus had discussed with Benedict the purpose which had brought him to Subiaco, and had given him the monk’s habit. By his advice Benedict became a hermit and for three years, unknown to men, lived in this cave above the lake.

Gregory tells us little of these years. He now speaks of Benedict no longer as a youth, but as a man of God. Romanus, Gregory tells us, served Benedict in every way he could. The monk apparently visited him frequently, and on fixed days brought him food. These three years of solitude, were broken only by occasional communications with the outer world and by the visits of Romanus.

Benedict matured both in mind and character, in knowledge of himself and of his fellow-man, and at the same time he became not merely known to, but secured the respect of, those about him; so much so that on the death of the abbot of a monastery in the neighbourhood (identified by some with Vicovaro), the community came to him and begged him to become its abbot.

Benedict was acquainted with the life and discipline of the monastery, and knew that “their manners were diverse from his and therefore that they would never agree together: yet, at length, overcome with their entreaty, he gave his consent”. The experiment failed; the monks tried to poison him. The legend goes that they first tried to poison his drink. He prayed a blessing over the cup and the cup shattered. 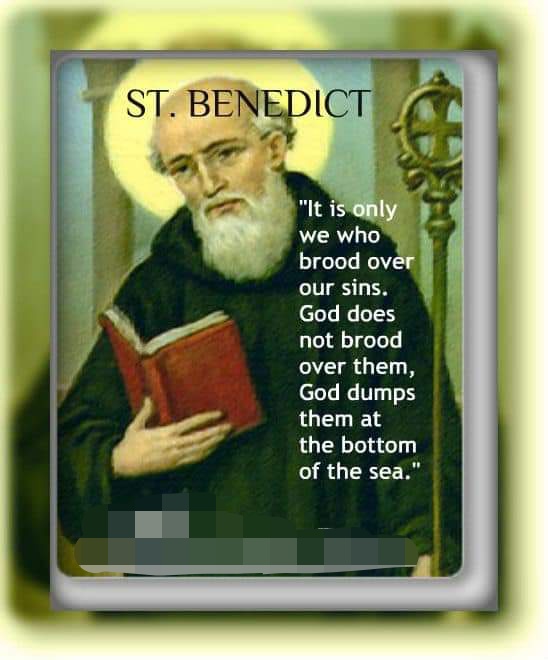 Thus he left the group and went back to his cave at Subiaco. There lived in the neighborhood a priest called Florentius who, moved by envy, tried to ruin him, by poisoning him with poisoned bread. He prayed a blessing over it, a raven swept in, and took the loaf away. From this time his miracles seem to have become frequent. Many people, attracted by his sanctity and character, came to Subiaco to be under his guidance.

Having failed by sending him poisonous bread, Florentius tried to seduce his monks with some prostitutes. To avoid further temptations, in about 530 Benedict left Subiaco. He founded 12 monasteries in the vicinity of Subiaco, and, eventually, in 530 he founded the great Benedictine monastery of Monte Cassino, which lies on a hilltop between Rome and Naples.

During the invasion of Italy, Totila, King of the Goths, ordered a general to wear his kingly robes and to see whether Benedict would discover the truth. Immediately Benedict detected the impersonation, and Totila came to pay him due respect. He is believed to have died of a fever at Monte Cassino not long after his twin sister, Scholastica, and was buried in the same place as his sister. According to tradition, this occurred on 21 March 547.

He was named patron protector of Europe by Pope Paul VI in 1964. In 1980, Pope John Paul II declared him co-patron of Europe, together with Cyril and Methodius. Furthermore, he is the patron saint of speleologists. On the island of Tenerife (Spain) he is the patron saint of fields and farmers. An important romeria (Romería Regional de San Benito Abad) is held on this island in his honor, one of the most important in the country.

In the pre-1970 General Roman Calendar, his feast is kept on 21 March, the day of his death according to some manuscripts of the Martyrologium Hieronymianum and that of Bede. Because on that date his liturgical memorial would always be impeded by the observance of Lent, the 1969 revision of the General Roman Calendar moved his memorial to 11 July. 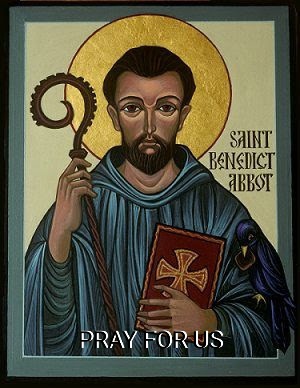 This is the date that appears in some Gallic liturgical books of the end of the 8th century as the feast commemorating his birth (Natalis S. Benedicti). There is some uncertainty about the origin of this feast. Accordingly, on 21 March the Roman Martyrology mentions in a line and a half that it is Benedict’s day of death and that his memorial is celebrated on 11 July.

While on 11 July it devotes seven lines to speaking of him, and mentions the tradition that he died on 21 March.The Eastern Orthodox Church commemorates Saint Benedict on 14 March. The Anglican Communion has no single universal calendar, but a provincial calendar of saints is published in each province. In almost all of these, Saint Benedict is commemorated on 11 July.

Benedict is remembered in the Church of England with a Lesser Festival on 11 July. Benedict wrote the Rule in 516 for monks living communally under the authority of an abbot. The Rule comprises seventy-three short chapters. Its wisdom is twofold: spiritual (how to live a Christocentric life on earth) and administrative (how to run a monastery efficiently). More than half of the chapters describe how to be obedient and humble, and what to do when a member of the community is not.

About one-fourth regulate the work of God (the “opus Dei”). One-tenth outline how, and by whom, the monastery should be managed. Following the golden rule of Ora et Labora – pray and work, the monks each day devoted eight hours to prayer, eight hours to sleep, and eight hours to manual work, sacred reading and/or works of charity.

Saint Benedict, we pray that in your loving kindness you will place our petitions before the throne of God, on the altar of the Most High. We have recourse to you in the dangers that daily strike us. Shield us from aggression of the evil one, that we may be humble, pure and of service before God and our neighbor. Inspire us to imitate you in all things.

Through Jesus Christ, we ask you to intercede for us, that God might protect us, our loved ones, our home, our possessions, and workplace today and always and that by your holy blessing, we may never be separated from the love of God. Amen 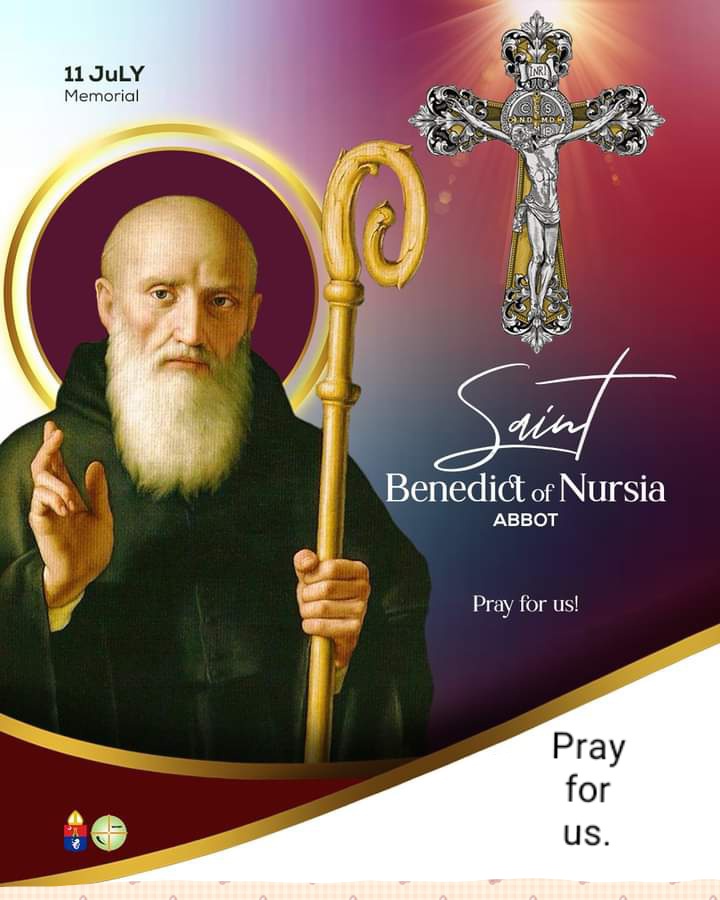