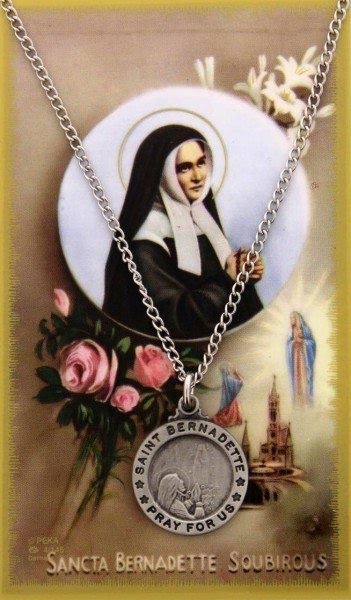 St. Bernadette was born in Lourdes, France on January 7, 1844. Her parents were very poor and she was the first of nine children. She was baptized at St. Pierre’s, the local parish church, on January 9. As a toddler, Bernadette contracted cholera and suffered extreme asthma. Unfortunately, she lived the rest of her life in poor health.

On Thursday, February 11, 1858, fourteen-year-old Bernadette was sent with her younger sister and a friend to gather firewood, when a very beautiful lady appeared to her above a rose bush in a grotto called Massabielle (Tuta de Massavielha).

The woman wore blue and white and smiled at Bernadette before making the sign of the cross with a rosary of ivory and gold. Bernadette fell to her knees, took out her own rosary and began to pray. Bernadette later described the woman as “uo petito damizelo,” meaning “a small young lady. Though her sister and friend claimed they were unable to see her, Bernadette knew what she saw was real. 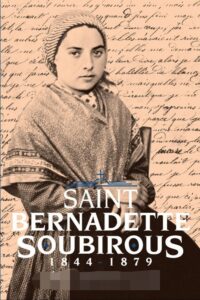 Three days later, Bernadette, her sister Marie, and other girls returned to the grotto, where Bernadette immediately knelt, saying she could see “aquero” again. She fell into a trance and one girl threw holy water at the niche and another threw a rock that shattered on the ground. It was then that the apparition disappeared On February 18, Bernadette said “the vision” asked her to return to the grotto each day for a fortnight.

With each visit, Bernadette saw the Virgin Mary and the period of daily visions became known as “la Quinzaine sacrée,” meaning “holy fortnight.” When Bernadette began to visit the grotto, her parents were embarrassed and attempted to stop her, but were unable to do so. On February 25, Bernadette claimed to have had a life-changing vision.

The vision had told her “to drink of the water of the spring, to wash in it and to eat the herb that grew there” as an act of penance. The next day, the grotto’s muddy waters had been cleared and fresh clear water flowed. On March 2, at the thirteenth of the apparitions, Bernadette told her family the lady sad “a chapel should be built and a procession formed.” 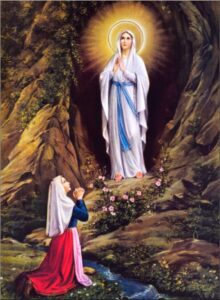 During her sixteenth vision, which Bernadette claims to have experienced for over an hour, was on March 25. Bernadette claimed she had asked the woman her name, but her question was only met with a smile. Bernadette asked again, three more times, and finally the woman said, “I am the Immaculate Conception.”

Church authorities and the French government rigorously interviewed the girl, and by 1862 they confirmed she spoke truth. Since Bernadette first caused the spring to produce clean water, 69 cures have been verified by the Lourdes Medical Bureau, and after what the Church claimed were “extremely rigorous scientific and medical examinations,” no one was able to explain what caused the cures.

The Lourdes Commission that initially examined Bernadette, ran an analysis on the water but were only able to determine it contained a high mineral content. Bernadette believed it was faith and prayer that was responsible for curing the sick. 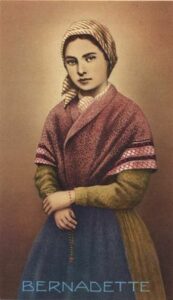 Bernadette asked the local priest to build a chapel at the site of her visions and the Sanctuary of Our Lady of Lourdes is now one of the major Catholic pilgrimage sites in the world. Many other chapels and churches has been built around it, including the Basilica of St. Pius X, which can accommodate 25,000 people and was dedicated by the future Pope John XXIII when he was the Papal Nuncio to France.

On July 29, 1866, Bernadette took the religious habit of a postulant and joined the Sisters of Charity at their motherhouse at Nevers. Her Mistress of Novices was Sister Marie Therese Vauzou and the Mother Superior at the time named her Marie-Bernarde, in honor of her grandmother.

Bernadette spent the rest of her life there working as an infirmary assistant, and later a sacristan. People admired her humility and spirit of sacrifice. Once a nun asked her if she had temptations of pride because she was favored by the Blessed Mother. “How can I?” she answered quickly. “The Blessed Virgin chose me only because I was the most ignorant.” 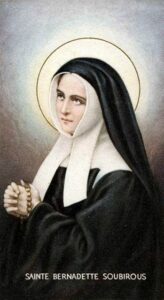 Unfortunately, she was diagnosed with tuberculosis of the bone in her right knee and was unable to take part in convent life. She died in the Sainte Croix (Holy Cross) Infirmary of the Convent of Saint-Gildard at the age of 35 on April 16, 1879, while praying the holy rosary.

Even on her deathbed Bernadette suffered severe pain and, keeping with the Virgin Mary’s admonition of “Penance, Penance, Penance,” she proclaimed “all this is good for Heaven!” Bernadette’s last words were, “Blessed Mary, Mother of God, pray for me. A poor sinner, a poor sinner.”

The nuns of Saint-Gildard, with the support of the bishop of Nevers, applied to the civil authorities for permission to bury Bernadette’s body in a small chapel dedicated to Saint Joseph, which was within the confines of the convent. Permission was granted on April 25, 1879, and on April 30, the local Prefect pronounced his approval of the choice of the site for burial. On May 30, 1879, Bernadette’s coffin was transferred to the crypt of the chapel of Saint Joseph, where a very simple ceremony was held to commemorate the event.

Thirty years layer, on September 22, two doctors and a sister of the community exhumed her body. They claimed the crucifix and rosary she carried had been oxidized but her body remained incorrupt. The incorruption was cited as one of the miracles supporting her canonization. Saint Bernadette is often depicted in prayer with a rosary or appealing to the Holy Virgin. She was beatified in 1925 and canonized by Pope Piuis XI in December 1933. Saint Bernadette is the patroness of illness, people ridiculed for their piety, poverty, shepherds, shepherdesses, and Lourdes, France. 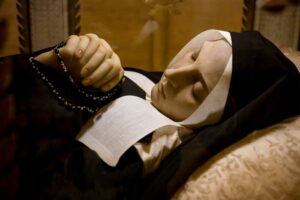 ST. BERNADETTE,
pure and simple child,
you who were privileged to
behold the beauty of
Mary Immaculate and to be
the recipient of her
confidence eighteen
times at Lourdes;
you who did desire from then
on to hide yourself in the
cloister of Nevers and there live
and die as a victim of sinners,
obtain for us that spirit of purity,
which will lead us also
to the glorious vision of God
and of Mary in Heaven. Amen.