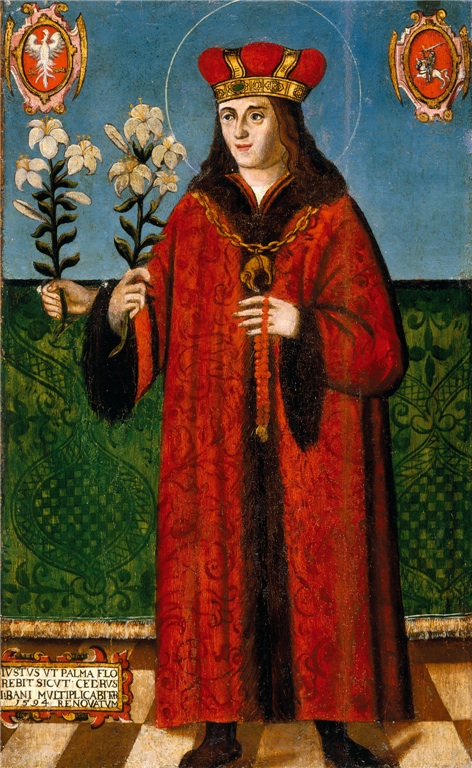 St. Casimir, (3 October 1458 – 4 March 1484) to whom the Poles gave the title of “The Peace-maker,” was the third of thirteen children of Casimir IV, King of Poland, and of Elizabeth of Austria, daughter of the Emperor Albert II. Devout from his infancy, the boy gave himself up to devotion and penance, and had a horror of anything approaching softness or self-indulgence. His bed was often the ground, and he spent a great part of the night in prayer and meditation, chiefly on the passion of our Saviour. His clothes were plain, and under them he wore a hairshirt.

Living always in the presence of God, he was invariably serene and cheerful, and pleasant to all. Casimir had everything that life could offer. But it was still not enough, and he knew it. Unlike many wealthy, powerful, educated people, Casimir knew that life did not offer, and could not offer, what the soul most deeply yearned for. He never lost sight of the higher things that truly mattered, even though his life was full of the intrigues and cares of war and state.

Any true search is open to finding. A search that begins with the premise that it will never find, or never end, is not really a search. It’s just wandering. A true searcher must be a finder. How many people claim to be searching for the truth, for God, for meaning! Yet when they unearth the elusive treasure, open it up, and see its contents, they are disappointed and move along to search for something else. Why? Perhaps because the treasure made moral demands on them, or required that prior life decisions be repudiated or modified.

If a searcher sets personal conditions on what he will find, his search will never end. The search will just become a reflection of the searcher’s own personality and desires, not a true quest for something objective outside of himself. Saint Casimir searched for God as a child and youth, as all children do. But his search unearthed a treasure very early on. What Casimir sought, Poland provided. Casimir imbued so totally what his Catholic birthplace offered that he is considered an emblematic Polish prince: pious, just, chaste, poor, and strong.

A country, similar to a religion, is a carrier of meaning. It absorbs and refines, over time, millions of individual searches until it responds to its people’s searches in the form of heroes, flags, hymns, holidays, and statues. A patriot loves his country in the same way that a religious man loves his religion and God. His love is specific. He loves a country, a religion, and a God—and Casimir was no exception. Saint Casimir never married and preserved his chastity until death, despite offers of marriage.

The saint’s love of God showed itself in his love of the poor who are Christ’s members, and for the relief of these the young prince gave all he possessed, using in their behalf the influence he had with his father and with his brother Ladislaus when he became king of Bohemia. In honour of the Blessed Virgin Mary, Casimir frequently recited the long Latin hymn “Omni die dic Mariae,” a copy of which was by his desire buried with him. This hymn, part of which is familiar to us through Bittleston’s version, “Daily, daily sing to Mary,” is not uncommonly called the Hymn of St Casimir, but it was certainly not composed by him; it is three centuries older than his time.

The nobles of Hungary, dissatisfied with their king, Matthias Corvinus, in 1471 begged the King of Poland to allow them to place his son Casimir on the throne. The saint, at that time not fifteen years old, was very unwilling to consent, but in obedience to his father he went to the frontier at the head of an army. There, hearing that Matthias had himself assembled a large body of troops, and finding that his own soldiers were deserting in large numbers because they could not get their pay, he decided upon the advice of his officers to return home.

The knowledge that Pope Sixtus IV had sent an embassy to his father to deter him from the expedition made the young prince carry out his resolution with the firmer conviction that he was acting rightly. King Casimir, however, was greatly incensed at the failure of his ambitious projects and would not permit his son to return to Cracow, but relegated him to the castle of Dobzki.
The young man obeyed and remained in confinement there for three months. Convinced of the injustice of the war upon which he had so nearly embarked, and determined to have no further part in these internecine conflicts which only facilitated the further progress into Europe of the Turks, St Casimir could never again be persuaded to take up arms though urged to do so by his father and invited once more by the disaffected Hungarian magnates.

He returned to his studies and his prayers, though for a time he was viceroy in Poland during an absence of his father. An attempt was made to induce him to marry a daughter of the Emperor Frederick III, but he refused to relax the celibacy he had imposed on himself. St Casimir’s austerities did nothing to help the lung trouble from which he suffered, and he died at the age of twenty-six in 1484 and was buried at Vilna, where his relics still rest in the church of St Stanislaus. Miracles were reported at his tomb, and he was canonized in 1521. He is the Patron saint of Poland, Lithuania, Russia, bachelors, youth and kings.

Almighty God, to serve you is to reign; grant that, with the help of Saint Casimir’s intercession, we may constantly serve you in holiness and justice. Through our Lord Jesus Christ, your Son, who lives and reigns with you in the unity of the Holy Spirit, one God, for ever and ever. Amen 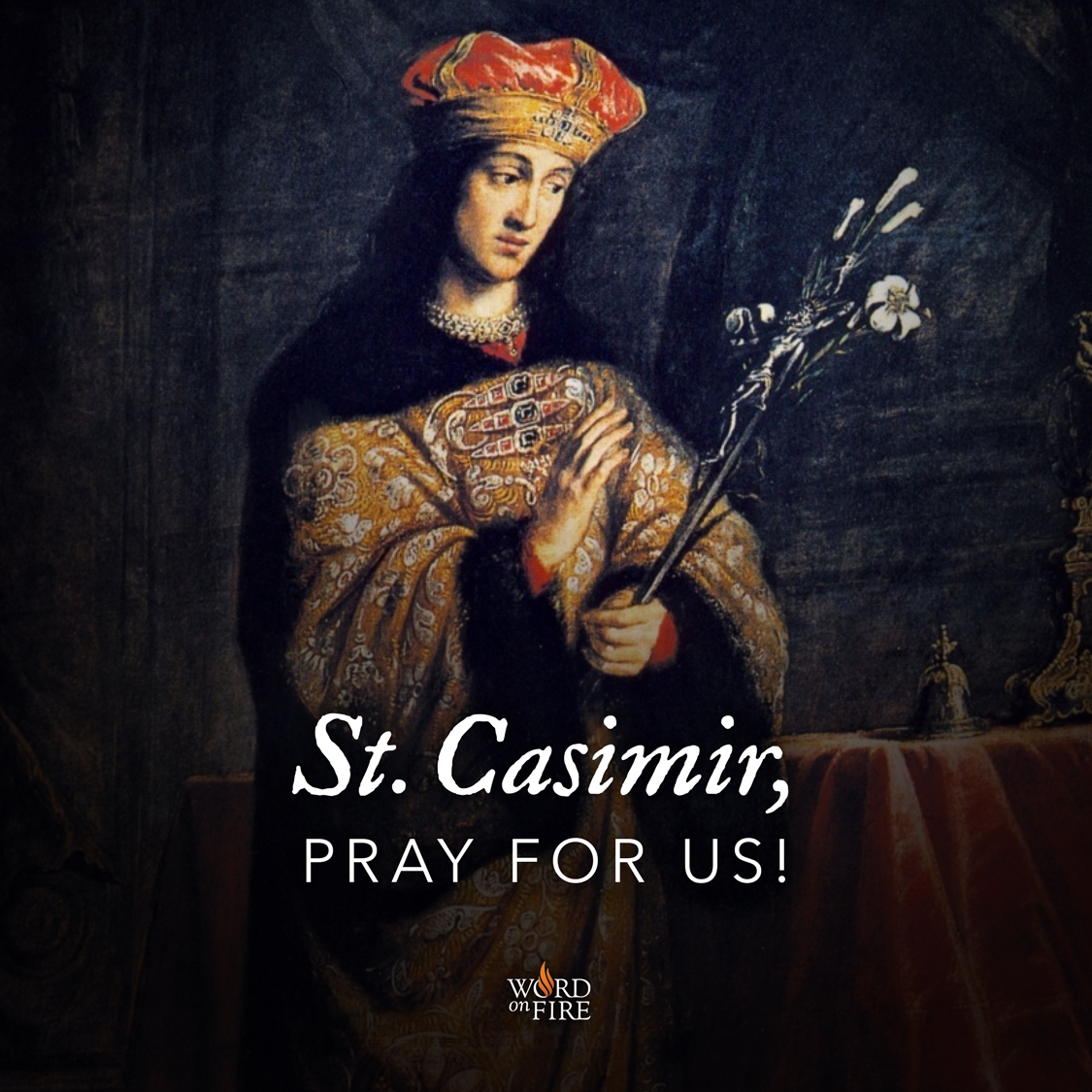 Saint Casimir of Poland, pray for us.