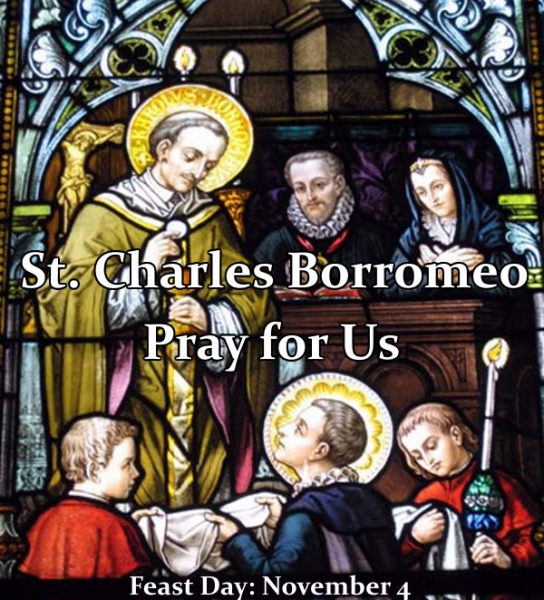 From a boy bishop to a giant of sanctity, today’s Saint, the young Charles, progressed quickly, and built up a holy and spiritual legacy of faithfulness in charity and fervency in humility. He was born in Arona in 1538, the second son of Gilbert and Margaret. At the age of 12 he was titled “commendatory” of a nearby Benedictine Abbey. The honorific title came with a notable income, but the future Saint insisted on dedicating the revenue to charity, caring for the poor.

After studying canon and civil law, at 21, Charles became a doctor of both laws. Several years later, his older brother, Federico, died. Many people counselled him to leave the ecclesiastical state, and take up his position as head of the family. But Charles decided to continue on the path to priesthood, ordained in 1563, at the age of 25. Consecrated as Bishop, he was able to participate in the final stages of the Council of Trent, becoming one of the principle promoters of the Catholic Reform, historically known as the Counter-Reformation. Later, he collaborated on the production of the Catechism of the Council of Trent.

As Archbishop of Milan, he introduced the indications of the Council, which compelled Bishops to reside in their Dioceses. Charles took possession of the Archdiocese of Milan in 1565, when he was only 27. His dedication to the Ambrosian Church was total. He founded seminaries for the formation of priests, built churches, schools, colleges, and hospitals; instituted the Congregation of Oblates, composed of secular priests; and donated his own family’s wealth to the poor. At the same time, Charles was dedicated to a profound reformation of the Church’s interior life.

In a particularly sensitive time in the life of the Church, the young Bishop was not afraid to defend the Church against the encroachments of the powerful and he was not lacking in the courage needed to renew Ecclesial structures, correcting abuses wherever he found them. Understanding that the reform of the Church, must begin with her Pastors, Borromeo encouraged priests, deacons, and religious to believe in the strength of prayer and penance, transforming their life into a true path of sanctity. “Souls,” he often repeated, “are won on one’s knees”. and “Pastors must be servants of God and fathers to their people”.

His pastoral ministry, nonetheless, met with hostility and while praying in his chapel, the future Saint was shot at with an arquebus. But the bullet failed to penetrate his vestments, and Charles was able to continue his mission. In the 1570’s, Milan was struck by a plague and the Milanese people could rely only on their Archbishop. Faithful to his familial motto Humilitas, Charles visited the sick during the plague years of 1576 and 1577, which was later called “the plague of St Charles,” in a prominent novel Promessi Sposi (“The Betrothed”).

The Archbishop of Milan also played an important role in bringing the Holy Shroud to Italy. It was in response to his intense desire to pray before the Shroud that the Duke of Savoy, in 1578, decided to bring the burial cloth of Christ from Chambéry, in France, to Turin, where it has remained ever since. St Charles made the pilgrimage to Turin on foot, praying and fasting over the course of four days.

After many years of labour, Charles Borromeo’s health began to fail; and in November 1584, the great Archbishop died, aged 46 years. He left a lasting moral and spiritual legacy. Charles was beatified in 1602 by Pope Clement VIII, and eight years later, canonized by Pope Paul V. His relics, since then, have been venerated in the crypt of the Cathedral of Milan, in the so-called “Scurolo,” with scenes from his life portrayed in silver foil panels along the walls.

Almighty Father, you gave Saint Charles Borromeo the singular privilege and grace of serving his flock and performng his ministry with dedication, in the service of the poor and marginalized. You equipped him with qualities that made him Bishop and leader at a very young age, working out tremendous reforms with sanctity and humility.

He was responsible in bringing the Holy Shroud to Italy. Grant that by imitation of such a venerable life, we too may imbibe the virtues of humility and service, to be worthy of your favor, in Jesus’ Name. Amen 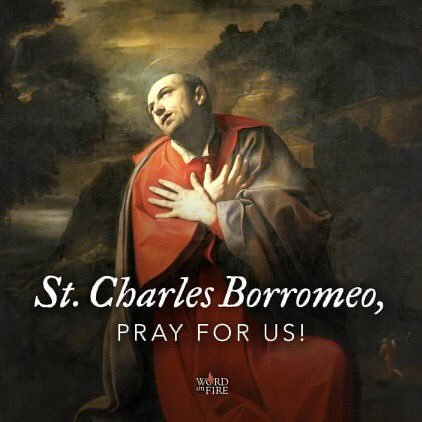 St Charles Borromeo, pray for us to acquire faith and dedication such as yours, to inculcate moral and spiritual growth, and most of all, to have humility and concern for the poorest of the poor.