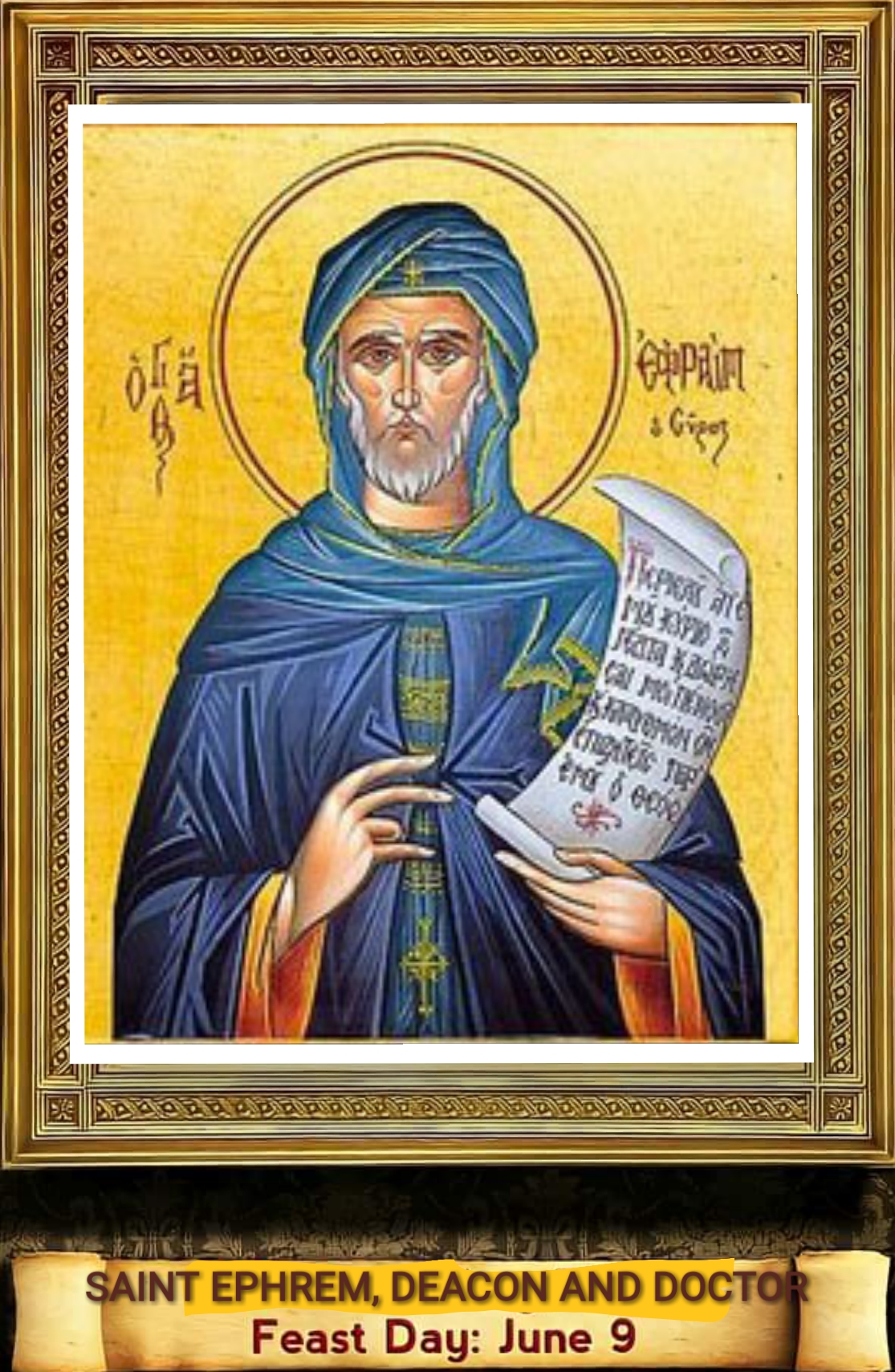 Ephrem the Syrian (c. 306 – 373), also known as Saint Ephrem, Saint Ephraim, Ephrem of Edessa or Aprem of Nisibis, was a prominent Christian theologian and writer, who is revered as one of the most notable hymnographers of Eastern Christianity. He was born in Nisibis, served as a deacon and lived in Edessa.

Ephrem, was active a century prior to the great conclusions and clarifications of the fifth-century Councils. Although Ephrem did not deviate from what later Councils would explicitly teach, he used far different language to communicate the same truths, anticipating later teachings through poetry. Saint Ephrem was a poet and a musician first and foremost.

Ephrem is venerated as a saint by all traditional Churches. He is especially revered in Syriac Christianity, both in East Syriac tradition and West Syriac tradition, and counted as a Venerable Father (i.e., a sainted Monk) in the Eastern Orthodox Church. He was declared a Doctor of the Church in the Roman Catholic Church in 1920. Ephrem is also credited as the founder of the School of Nisibis, which, in later centuries, was the centre of learning of the Church of the East.

Ephrem wrote a wide variety of hymns, poems, and sermons in verse, as well as prose exegesis. These were works of practical theology for the edification of the Church in troubled times. So popular were his works, that, for centuries after his death, Christian authors wrote hundreds of pseudepigraphal works in his name. He has been called the most significant of all of the fathers of the Syriac-speaking church tradition, and patron of the Syriac people.

Ephrem was born around the year 306 in the city of Nisibis (modern Nusaybin, Turkey), in the Roman province of Mesopotamia, that was recently acquired by the Roman Empire. Internal evidence from Ephrem’s hymnody suggests that both his parents were part of the growing Christian community in the city, although later hagiographers wrote that his father was a pagan priest.

In those days, religious culture in the region of Nisibis included local polytheism, Judaism and several varieties of the Early Christianity. Most of the population spoke Aramaic language, while Greek and Latin were languages of administration. The city had a complex ethnic composition, consisted of “Assyrian, Arabs, Greeks, Jews, Parthians, Romans, and Iranians”.

Jacob, the second bishop of Nisibis, was appointed in 308, and Ephrem grew up under his leadership of the community. Jacob of Nisibis is recorded as a signatory at the First Council of Nicea in 325. Ephrem was baptized as a youth and almost certainly became a son of the covenant, an unusual form of Syriac proto-monasticism.

Jacob appointed Ephrem as a teacher (Syriac malp̄ānâ, a title that still carries great respect for Syriac Christians). He was ordained as a deacon either at his baptism or later. He began to compose hymns and write biblical commentaries as part of his educational office. In his hymns, he sometimes refers to himself as a “herdsman”, to his bishop as the “shepherd” and to his community as a ‘fold’.

Ephrem is popularly credited as the founder of the School of Nisibis, which, in later centuries, was the centre of learning of the Church of the East. In 337, Emperor Constantine I, who had legalised and promoted the practice of Christianity in the Roman Empire, died. Seizing on this opportunity, Shapur II of Persia began a series of attacks into Roman North Mesopotamia.

Nisibis was besieged in 338, 346 and 350. During the first siege, Ephrem credits Bishop Jacob as defending the city with his prayers. In the third siege, of 350, Shapur rerouted the River Mygdonius to undermine the walls of Nisibis. The Nisibenes quickly repaired the walls while the Persian elephant cavalry became bogged down in the wet ground.

Ephrem celebrated what he saw as the miraculous salvation of the city in a hymn that portrayed Nisibis as being like Noah’s Ark, floating to safety on the flood. One important physical link to Ephrem’s lifetime is the baptistery of Nisibis. The inscription tells that it was constructed under Bishop Vologeses in 359. In that year, Shapur attacked again.

The cities around Nisibis were destroyed one by one, and their citizens killed or deported. Constantius II was unable to respond; the campaign of Julian in 363 ended with his death in battle. His army elected Jovian as the new emperor, and to rescue his army, he was forced to surrender Nisibis to Persia (also in 363) and to permit the expulsion of the entire Christian population.

Ephrem, with the others, went first to Amida (Diyarbakır), eventually settling in Edessa (Urhay, in Aramaic) in 363. Ephrem, in his late fifties, applied himself to ministry in his new church and seems to have continued his work as a teacher, perhaps in the School of Edessa. Edessa had been an important center of the Aramaic-speaking world, and the birthplace of a specific Middle Aramaic dialect that came to be known as the Syriac language.

The city was rich with rivaling philosophies and religions. Ephrem comments that orthodox Nicene Christians were simply called “Palutians” in Edessa, after a former bishop. Arians, Marcionites, Manichees, Bardaisanites and various gnostic sects proclaimed themselves as the true church. In this confusion, Ephrem wrote a great number of hymns defending Nicene orthodoxy. 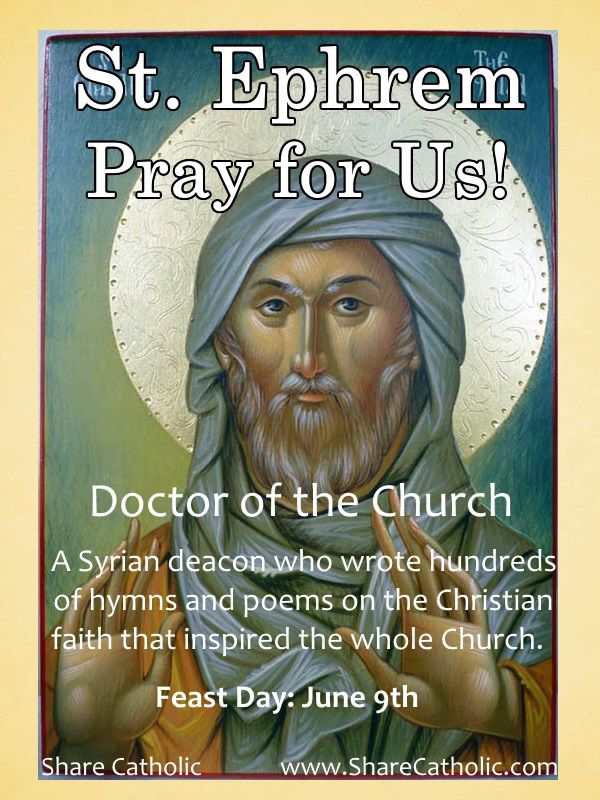 A later Syriac writer, Jacob of Serugh, wrote that Ephrem rehearsed all-female choirs to sing his hymns set to Syriac folk tunes in the forum of Edessa. After a ten-year residency in Edessa, in his sixties, Ephrem succumbed to the plague as he ministered to its victims. The most reliable date for his death is 9 June 373.

Ephrem wrote exclusively in his native Aramaic language, using the local Edessan (Urhaya) dialect, that later came to be known as the Classical Syriac. Ephrem’s works contain several endonymic (native) references to his language (Aramaic), homeland (Aram) and people (Arameans). He is therefore known as “the authentic voice of Aramaic Christianity”.

One of the early admirers of Ephrem’s works, theologian Jacob of Serugh (d. 521), who already belonged to the generation that accepted the custom of a double naming of their language not only as Aramaic but also as “Syriac”, wrote a homily dedicated to Ephrem, praising him as the crown or wreath of the Arameans and the same praise was repeated in early liturgical texts.

Only later, under the Greek influence, already prevalent in the works of Theodoret of Cyrus from the middle of the 5th century, it became customary to associate Ephrem with Syriac identity, and label him only as “the Syrian”, thus blurring his Aramaic self-identification, attested by his own writings and works of other Aramaic-speaking writers, and also by examples from the earliest liturgical tradition.

Several translations of his writings exist in Classical Armenian, Coptic, Old Georgian, Koine Greek and other languages. Soon after Ephrem’s death, legendary accounts of his life began to circulate. One of the earlier “modifications” is the statement that Ephrem’s father was a pagan priest of Abnil or Abizal. But internal evidence from his authentic writings suggest that he was raised by Christian parents.

Saint Ephrem’s attributes are a Vine and scroll, deacon’s vestments and thurible; with Saint Basil the Great; composing hymns with a lyre. His Patronage is towards Spiritual directors, spiritual leaders and Syriacs/Arameans.

Saint Ephrem, your writings and hymns are full of rich, poetic imagery drawn from biblical sources, folk tradition, telling lovingly about the truths of our faith. You used these to also warn your flock of the heresies that threatened to divide the early church.

Your hymns describe the Incarnation of Christ as fully human and divine. Help all Christian artists to stay true to the Truth and to propagate Jesus Christ to the world through beauty, music, and images that are uplifting and holy.

May they, as you intended, raise the mind and lift the heart to God Himself, remaining a popular source of inspiration throughout the Church. 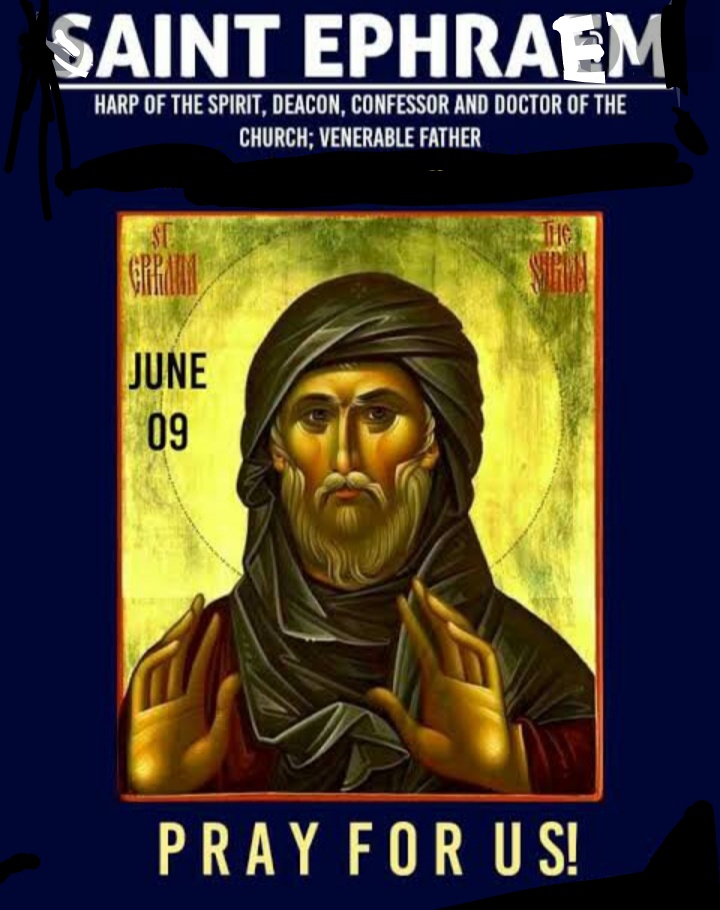 Saint Ephrem, pray for us.