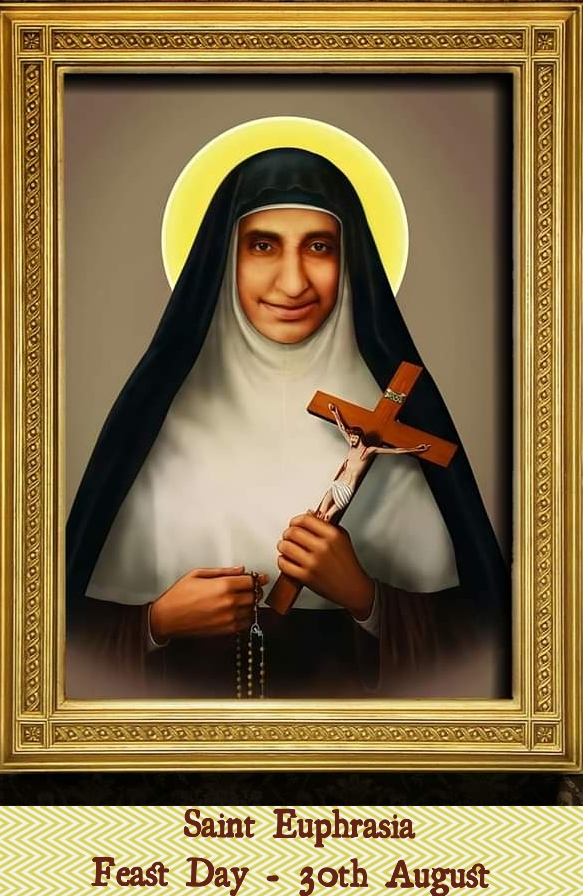 The daughter of Anthony and Kunjethy of Eluvathingal Cherpukaran, Rose Eluvathingal was born on 17 October 1877 in the village of Kattoor, in the Diocese of Trichur, India. Her mother’s deep piety and great devotion to the Virgin Mary, the Mother of God, had a strong influence on little Rose from her childhood.

From the stories that her mother told her, especially about St Rose of Lima, she grew with a strong desire to practice the virtues, to suffer for Jesus and to be holy, and to do all this in a quiet, hidden manner. During her developing years Rose began to detach herself from earthly possessions and pleasure and took a great interest in spiritual matters.

This was all the more rooted in her at the age of 9 by means of an apparition of the Blessed Mother, after which the young girl offered herself totally to the Lord. Notwithstanding the strong opposition of her father, who wanted Rose to marry into a rich family, she wanted to become a religious Sister.

Her intense prayer life, which included the rosary, fasting and abstinence, as well as the rather sudden death of her younger sister, brought about a change of heart in her father, Anthony, who granted Rose permission to enter the convent. In fact, her father accompanied her personally to the convent of the Congregation of the Mother of Carmel at Koonammavu, the first indigenous congregation of Syro-Malabars.

But even with her desire to be a Religious, Rose was often afflicted with various illnesses which caused her intense suffering. Once, during a particularly painful attack, the Sisters were resolved to send her away for ever, but through an apparition of the Holy Family she received a miraculous healing that permitted her to continue following God’s call.

On 10 May 1897 Rose became a postulant and took the name Sr Euphrasia of the Sacred Heart of Jesus, and on 10 January 1898 she received the holy habit of Carmel. She practised the virtues of humility, charity and renunciation and grew in holiness with the help of the Blessed Virgin Mary. For the periods of grave illness and the trials of the powers of darkness that she endured, she was rewarded by intense spiritual joys.

On 24 May 1900 St Mary’s Convent was founded in the current Archdiocese of Trichur, and on the same day Sr Euphrasia made her perpetual vows to God, a day of unspeakable joy, since now she belonged for ever to her Heavenly Spouse. From 1904 to 1913 Sr Euphrasia was entrusted with the duty of novice mistress and, sustained by the gifts and power of the Holy Spirit, she formed the future members of her Congregation.

In their Mother Mistress the novices saw the heroic virtues of humility, poverty, penance, obedience and abandonment to God’s will. Although Sr Euphrasia wanted to live a hidden life, she was chosen as Superior of the Convent of St Mary at Ollur. Due to her profound humility she found it difficult to accept this new duty.

But after an interior inspiration she acquired a statue of the Sacred Heart of Jesus, placed it in the centre of the convent and entrusted the duty of Mother Superior to his Sacred Heart. She held the post from 1913 to 1916.
For almost 48 years the convent of St Mary was home to Mother Euphrasia.

Observing her life of prayer and holiness, the local people called her “Praying Mother”, and her Sisters in community referred to her as the “Mobile Tabernacle”, because the divine presence she kept within her radiated to all she encountered. From the first years of her Religious life, Mother Euphrasia had the blessing of the spiritual guidance of Bishop John Menacherry.

He ordered her to reveal to him every aspect of her spiritual life, and he wisely kept all of her letters. When his successor, Mar George Alappatt, retired, he entrusted the letters to the Superior of the Congregation of the Carmelites of Trichur with the prophetic words: “You will need them”. In fact, they are a precious treasure and an authentic mirror of the spiritual life of this holy, humble Religious.

Loving Church and neighbour
Mother Euphrasia spent much of her day in the convent chapel before the Blessed Sacrament and she also nourished a great love and devotion for the Blessed Virgin Mary; as a result, she was naturally an apostle of the Eucharist and of the Rosary.

She was totally dedicated to love and was continually consoled by the Crucified Lord. She was the first to humble herself and to accept suffering, misunderstandings and rejection for love of Christ. Her strength came from Jesus, who had become her betrothed in spiritual matrimony as her letters testify.

From her profound union with the Lord Jesus, came her capacity to give of herself to others, and so she fully incarnated the motto of her Congregation: “Remain united to me in contemplation and consecrated to me in action” (cf. Jn 15: 5).

Thus, with a pure heart Mother Euphrasia gave her maternal love and tenderness to those who sought her help. She gave them the comforting words of Jesus’ Gospel and interceded for them. For each little kindness bestowed upon her she would reply, “I will not forget it, not even after death”.

Mother Euphrasia had a profound sense of Church and she personally felt the sorrows and problems of the Church of her day. She offered her mortifications and penances for the conversion of schismatics and asked the novices and children to pray for them. She prayed ardently before the Blessed Sacrament for the Holy Father, for Bishops, priests and Religious.

Mother Euphrasia offered her life in sacrifice for love of God. She abandoned herself to his will and finally joined him in the heavenly embrace with her holy death on 29 August 1952. After Mother Euphrasia’s death many of those who had obtained her help during her lifetime now continued to beseech her help at her tomb. In 1990 her tomb was opened, and her mortal remains were moved to the convent chapel.

Pope John Paul II approved the Decree of the heroic virtues of the Servant of God in 2002, proclaiming her Venerable. She was beatified on 3 December 2006 in St. Anthony’s Forane Church, Ollur, with the declaration of the Major Archbishop, Varkey Vithayathil, on behalf of Pope Benedict XVI. She was canonised as a saint by Pope Francis on 23 November 2014.

Help us to emulate your exemplary way of life, to live for the edification of Christ’s Body, the Church and to offer endless praise and glorify his Holy Name. May we strive to obtain God’s grace and protection from every evil, especially sin, through your holy intercession for us. Amen 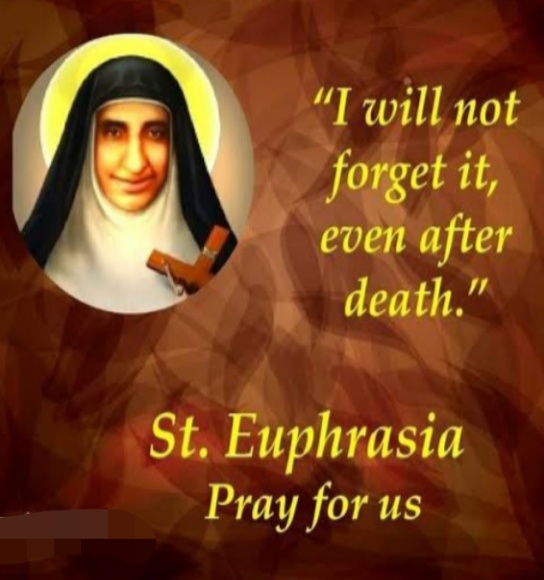