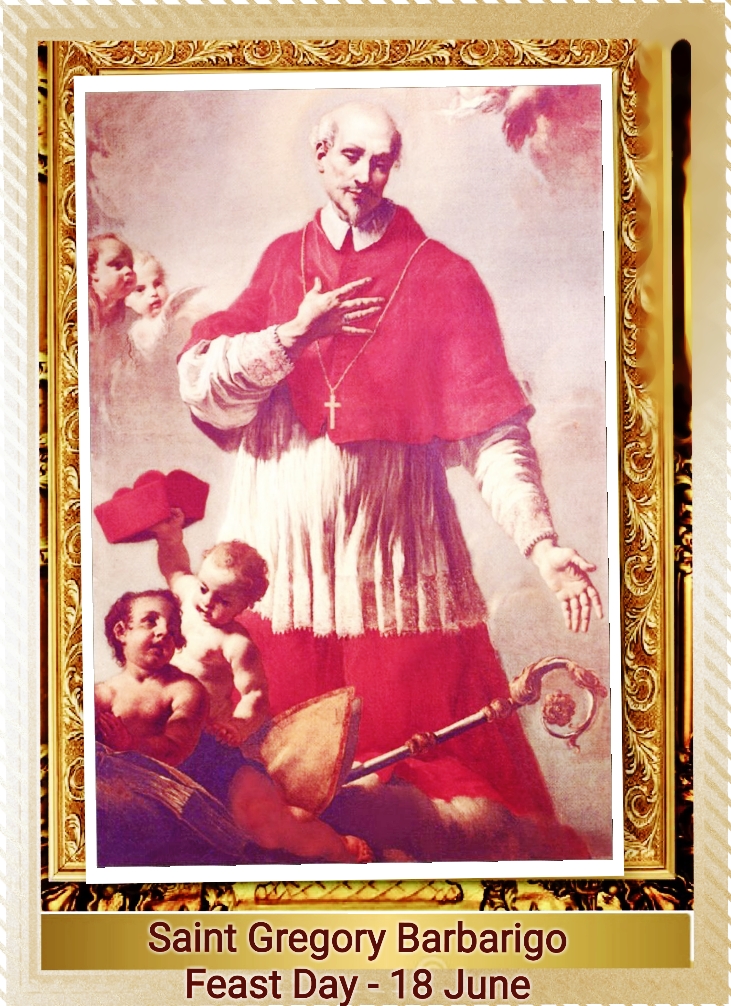 Gregorio Giovanni Gaspare Barbarigo (16 September 1625 – 18 June 1697) was an Italian Roman Catholic cardinal who served as the Bishop of Bergamo and later as the Bishop of Padua. He was a frontrunner in both the 1689 and 1691 papal conclaves as he had distinguished himself for his diplomatic and scholastic service. He became noted as a scholar for his distinguished learning and as an able pastor for his careful attention to pastoral initiatives and frequent parish visitations.

St. Gregory was born on September 16, 1625, and he died in 1697. His family lived in Venice and were held in high repute by the people there. He was the fourth son. He excelled in his studies at an early age and became interested in diplomacy and statesmanship. He knew Contarine, the Venetian ambassador, and went with him on at least one ambassadorial mission.

He was also a relation of Cardinal Angelo Barbarigo. His ancestors included the two Venetian doges Marco Barbarigo and Agostino Barbarigo. His father instructed him in philosophical studies and in mathematics while preceptors taught him Latin and Greek. He acquired the rudiments of music.

In 1643 he accompanied as secretary the Venetian ambassador Aloise Contarini to Münster for the negotiations to prepare for the Peace of Westphalia which was signed on 24 October 1648. There he became acquainted with Archbishop Fabio Chigi (the future Pope Alexander VII) – the nuncio to Cologne and a participant in the negotiations. He went to Holland, Flanders and then to Paris. In July 1648 he returned to Venice, continuing his studies in Padua.

In 1650 he was elected as a member of the Collegio dei Savi and initiated his political career which he did not find to be good for him. In the winter in 1653 he went to Rome to ask the advise of Cardinal Chigi who recommended that he not retire as a hermit but follow the ecclesiastical career and begin obtaining a doctorate in law.

Barbarigo obtained a doctorate in “utroque iure” both canon law and civil law on 25 September 1655 and received his ordination to the priesthood on 21 December 1655 from the Cardinal Patriarch of Venice Gianfrancesco Morosini. He left for Rome in late February 1656 for Chigi – now Pope Alexander VII – initiated him into the papal service.

He was named a domestic prelate of His Holiness and on 21 April 1656 was appointed as the Referendary of the Tribunals of the Apostolic Signature of Justice and of Grace. On 9 June 1665 he was given a canonicate in the cathedral chapter of Padua without the requirement of residence and in 1656 – at the request of the pope – he organized the assistance to the Romans in the Trastevere area who had been stricken with the plague.

He oversaw the care of the mothers and their children and the funerals of the deceased in this work. He nursed the sick, buried to dead, and comforted those frightened and in mourning. On 9 July 1657 the pope appointed him as Bishop of Bergamo and he received his episcopal consecration as such on 29 July 1657 from Marcantonio Bragadin.

But before he accepted the post he decided to celebrate a Mass to discern the will of God when he felt the concrete call to take on the see during the Mass. Barbarigo took possession of his new episcopal see on 2 September through his procurators Rodolfo Roncalli the archdeacon and the vice-capitular Giovanni Battista Lavezzali while he himself arrived there on 27 March 1658. He inspected each of the 279 parishes of the diocese.

In 1664 he was made Bishop of Padua and upon entrance into his new diocese he strove to model himself upon the example of Charles Borromeo. His procurator the Archpriest Galeazzo Mussato took possession of the see on Barbarigo’s behalf on 24 April before the cardinal entered the see on 22 June. He was a strong supporter of the work of the Council of Trent. 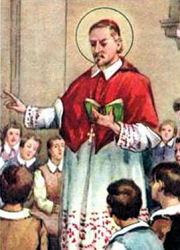 He made the seminaries of Padua and of Bergamo larger and added an archive and printing press in Padua. He celebrated a diocesan synod from 1–3 September 1683 and wrote the “Regulae Studiorum” in 1690 for ecclesial studies. He also visited all 320 parishes in his diocese. The cardinal learned in 1678 that Elena Piscopia was pursuing a theological course and he refused this on the basis that she was a woman.

But he allowed for her to obtain a philosophical degree which she did. In his role as a cardinal he participated in his first papal conclave in 1667 and also attended those in 1676 and that of 1689 when he emerged as a potential contender though falling short of the votes needed to become pope. The same was in 1691 when he emerged as a greater threat to other contenders.

He did not attend the 1669-70 conclave. The election of Pope Innocent XI in 1676 saw the pope ask Barbarigo to remain in Rome until 1679 as his counselor and entrusted Rome’s education to him and the reunification of the Eastern Churches. One of his episcopal acts was to consecrate as a bishop Niels Stensen on 19 September 1677. He ordained the convert Thomas Nicholson a priest.

The 1691 conclave shifted Barbarigo’s status as a potential contender for he gained greater ground and almost succeeded in becoming pope. Cardinal d’Estrées included him in his list of potential candidates in light of the impending death of Alexander VIII while Cardinal Leandro Colloredo decided to throw his support behind Barbarigo.

Even Chigi – who had blocked his candidature back in 1689 – thought well to advocate Barbarigo’s name. But the French were not all that enthralled with Barbarigo since he was considered a leading ‘creature’ of Alexander VII who had not been too lenient with the French. Cardinals Pietro Ottoboni and Paluzzo Paluzzi Altieri were opposed to his candidature and in the end was elected Antonio Pignatelli as Pope Innocent XII.

Cardinal Barbarigo fostered catechetical instruction and he travelled to each village in his diocese in order to teach and to preach to the people. His compassion to the poor was well known for he gave his household goods and his clothes to the poor for their comfort. He even sold his bed on one occasion to help them. Barbarigo died after a brief illness on 18 June 1697 in Padua where he was interred in the diocesan cathedral.

Bishop Barbarigo was distinguished by his piety and heroic patience and miracles quickly bore witness to his sanctity. His holiness was observed in his life enough to the point that the faithful started to press the competent ecclesial authorities to launch the process for sainthood with the informative phase of the investigation ending on 11 July 1716; the formal introduction to the cause came under Pope Innocent XIII on 3 July 1723.

His remains were exhumed on 25 May 1725 and allegedly found to be incorrupt with his nephew Bishop Giovanni Francesco Barbarigo leading the exhumation initiative. However, the report of the examining physicians was actually equivocal. While medical professionalism prevented them form saying the body was incorrupt, popular opinion and ecclesiastical expectations were otherwise.

The report stated that the condition of the body was “wondrous” which fell short of miraculous, a distinction largely lost upon those interested. Pope Clement XIII beatified Barbarigo in 1761 while Pope John XXIII canonized Barbarigo in mid-1960. The beatification seemed all the more fitting for Clement XIII since his mother – Vittoria Barbarigo, was a distant relative of the late cardinal.

That latter pope, while he was a simple priest, signed a petition in 1911 addressed to Pope Pius X requesting Barbarigo’s cause to be taken forward, for the late cardinal to become a saint. Pope Pius X did so on 28 February 1912 when he issued the decree to resume the cause. John XXIII is said to have felt a close kinship with the late cardinal.

Saint Gregory Barbarigo, you always had great prudence and love, which you said impels us to run to God. You taught your flock that though the impulse to rush toward God is blind and at times we would stumble, the prudence we develop would always guide us.

May we walk in holiness as you did, and always work with integrity, for the greater glory of God. Saint Gregory, pray for us. 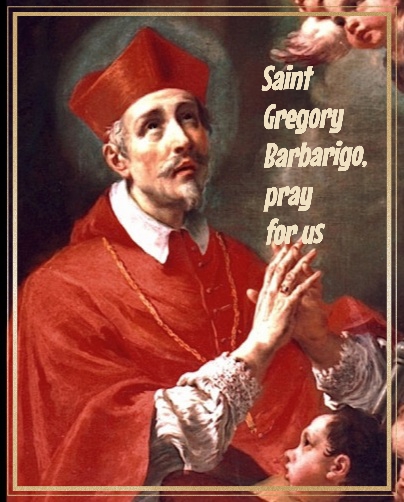