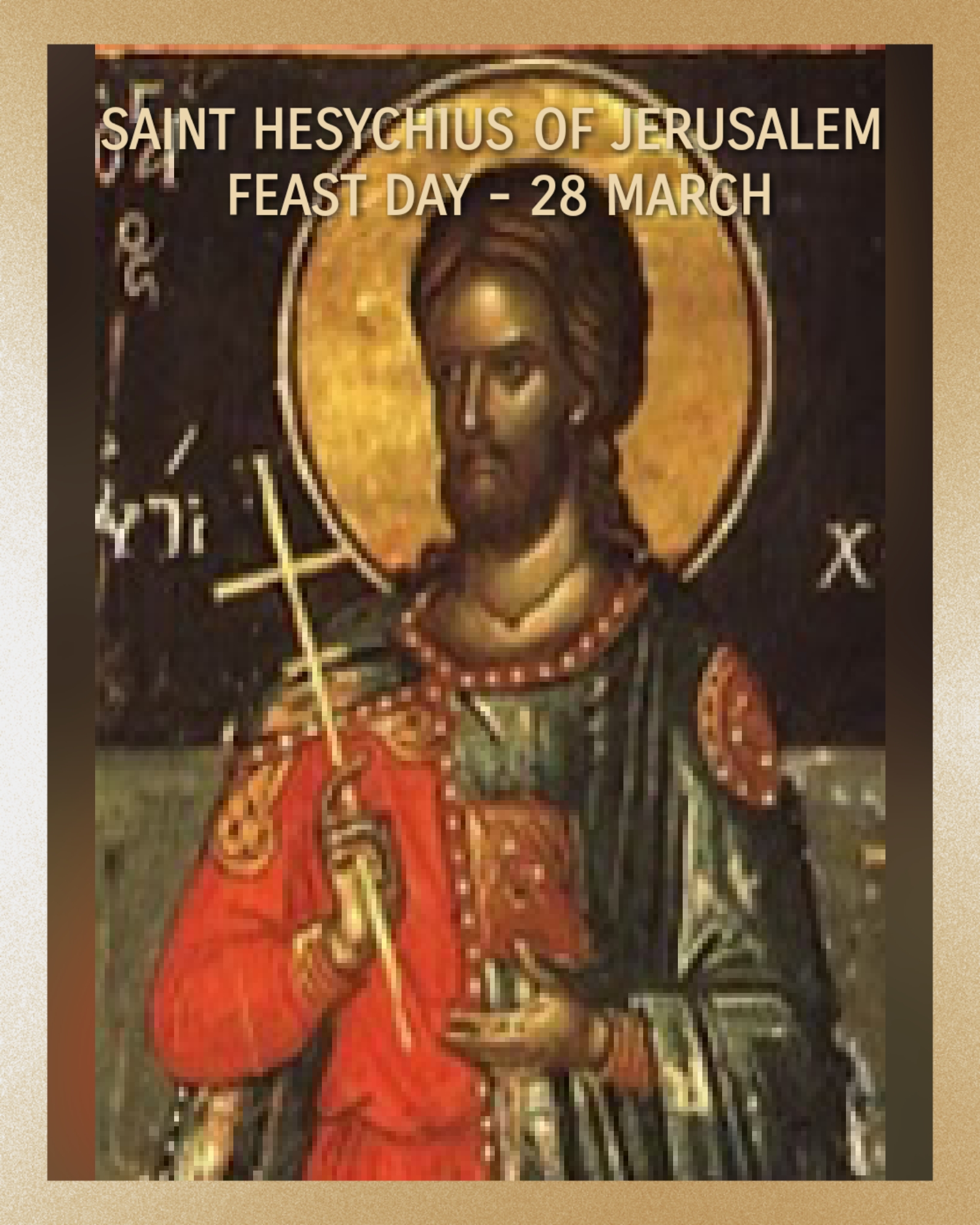 Hesychius of Jerusalem was a Christian presbyter and exegete, active during the first half of the fifth century. Nothing certain is known as to the dates of his birth and death, or, indeed, concerning the events of his life. Bearing as he does the title “priest”, he is not to be confused with Bishop Hesychius of Jerusalem, a contemporary of Gregory the Great.

He was consecrated as a Christian Presbyter (Leader and Elder) by the Archbishop of Jerusalem. He wrote many books and commentaries on the Bible. They include Leviticus, the Psalms, Minor Prophets, Isaiah, Luke and the Blessed Virgin Mary although, sadly, not all of his manuscripts have survived the ravages of time.

Through his writings, he became a highly respected authority on Christian teaching. He had a special devotion to the Eucharist and told his followers, “Keep yourselves free from sin so that every day you may share in the mystic meal; by doing so our bodies become the body of Christ.”

The writings of Hesychius of Jerusalem have been in part lost, in part handed down and edited as the work of other authors, and some are still buried in libraries in manuscript. Whoever would collect and arrange the fragments of Hesychius which have come down to us must go back to the manuscripts.

About half of the matter under “Hesychius” must be discarded. However, the commentary on Leviticus, which is extant in its entirety only in Latin is authentic, although its biblical text has been aligned to the Vulgate text rather than the Septuagint. Its authenticity has been proved by the publication of a Greek fragment, which, moreover, shows that the Latin text is in poor condition.

A comprehensive critical edition of the homilies, said to be of Hesychius, both authentic and spurious, transmitted in Greek under Hesychius’ name was published by Michel Aubineau. Judging from the extant fragments—scattered and translated into Armenian, Georgian, and Latin, Hesychius must have been a very prolific writer on Biblical, particularly Old Testament, exegetics.

The notice in the Greek Menology under 28 March, in which mention is made of the exposition of the entire Scriptures, can refer to none other than Hesychius of Jerusalem. In hermeneutics he adheres to the allegorico-mystical method of the Alexandrines; he finds in every sentence of the Bible a mystery of dogma, and reads into texts of the Old Testament the whole complexus of ideas in the New.

His comment on Isaiah, xix, 1, “the Lord will ascend upon a swift cloud, and will enter into Egypt” is “Christ in the arms of the Virgin”. Water represents always to him “the mystical water” (of baptism), and bread, “the mystical table” (of the Eucharist). It is this hyper-allegorical and glossarial method which constitutes the peculiar characteristic of his exegesis, and proves a valuable help to the literary critic in distinguishing authentic Hesychiana from the unauthentic.

The anti-Semitic tone of many scholia may find an explanation in local conditions; likewise geographical and topographical allusions to the holy places of Palestine would be expected of an exegete living at Jerusalem. The importance of Hesychius for textual criticism lies in the fact that many of his paraphrases echo the wording of his exemplar, whereby he has saved many rare variants.

He is likewise of importance in Biblical stichometry. His “Capitula” and commentaries show the early Christian division into chapters of at least the Twelve Minor Prophets and Isaiah, which corresponds to the inner sequence of ideas of the respective books better than the modern division.

In the case of certain separate books, Hesychius has inaugurated an original stichic division of the Sacred Text—for the “citizen of the Holy City” cited in the oldest manuscripts of catenae of the Psalms, and the Canticles, is none other than Hesychius of Jerusalem. It was discovered by Giovanni Mercati that in some manuscripts the initial letter of each division according to Hesychius is indicated in colour.

Hesychius must have been generally known as an authority, for he is quoted simply as Hagiopolites, or, elsewhere, by the equally laconic expression “him of Jerusalem” St Hesychius was also well known for his preaching and teaching. He died around 450. St Hesychius’ Feast Day in the Greek Orthodox Church is the 28th March. 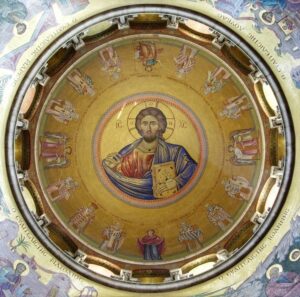 Saint Hesychius of Jerusalem, pray for us that we will seek the wisdom to search for a deep love of Jesus in our everyday life. Amen