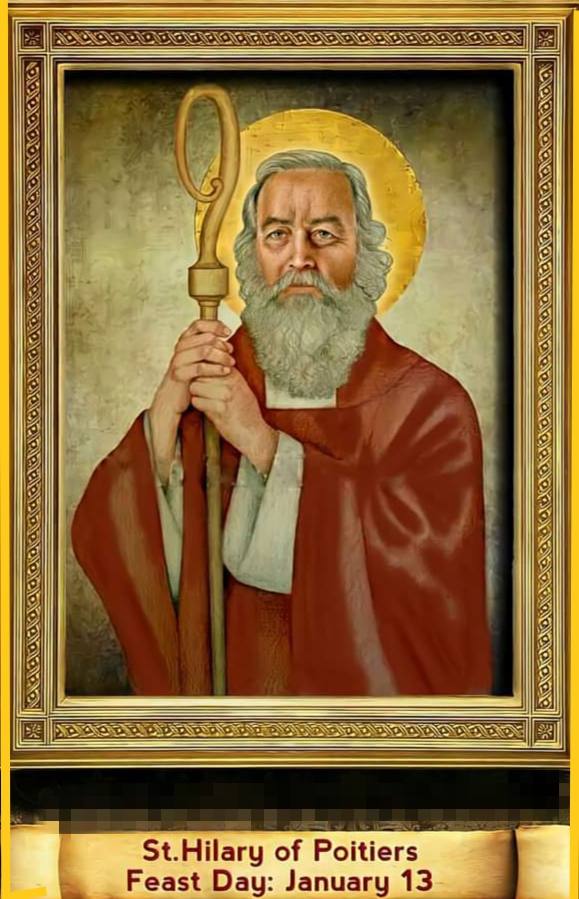 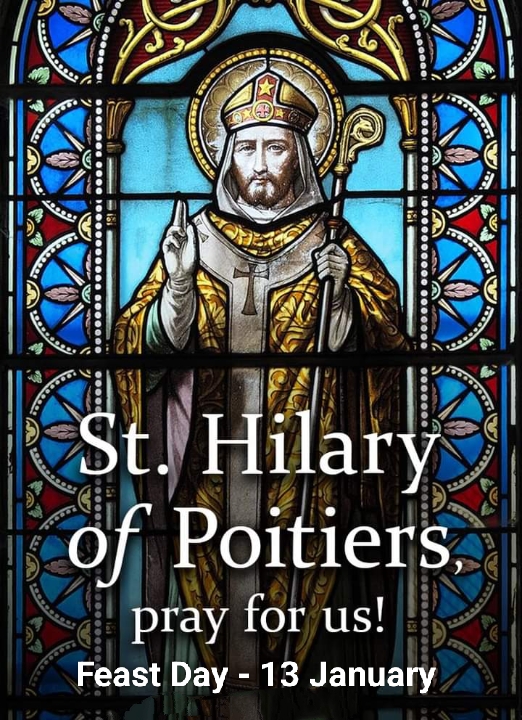 A convert from Neoplatonism, Hilary was elected bishop of Poitiers (c. 353). He was exiled (356–360) to Phrygia by the Roman emperor Constantius II for not condemning the leading opponent of Arianism, St. Athanasius the Great, at the Council of Béziers (356). His parents were pagans of distinction. He received a good pagan education, which included a high level of Greek. He studied, later on, the Old and New Testament writings, with the result that he abandoned his Neo-Platonism for Christianity, and with his wife and his daughter (traditionally named Saint Abra), was baptized and received into the Church.

The Christians of Poitiers so respected Hilary that about 350 or 353, they unanimously elected him their bishop. At that time Arianism threatened to overrun the Western Church. Hilary undertook to repel the disruption, his first steps being to secure the excommunication, by those of the Gallican hierarchy who still remained orthodox Christians, of Saturninus, the Arian Bishop of Arles, and of Ursacius of Singidunum and Valens of Mursa, two of his prominent supporters.

About the same time, Hilary wrote to Emperor Constantius II a remonstrance against the persecutions by which the Arians had sought to crush their opponents (Ad Constantium Augustum liber primus, of which the most probable date is 355. Other Historians refer to this first book to Constantius as “Book Against Valens,” of which only fragments are extant). His efforts did not succeed at first, for at the synod of Biterrae (Béziers), summoned by the emperor in 356 with the professed purpose of settling the longstanding dispute, an imperial rescript banished the new bishop, along with Rhodanus of Toulouse, to be exiled to Phrygia. 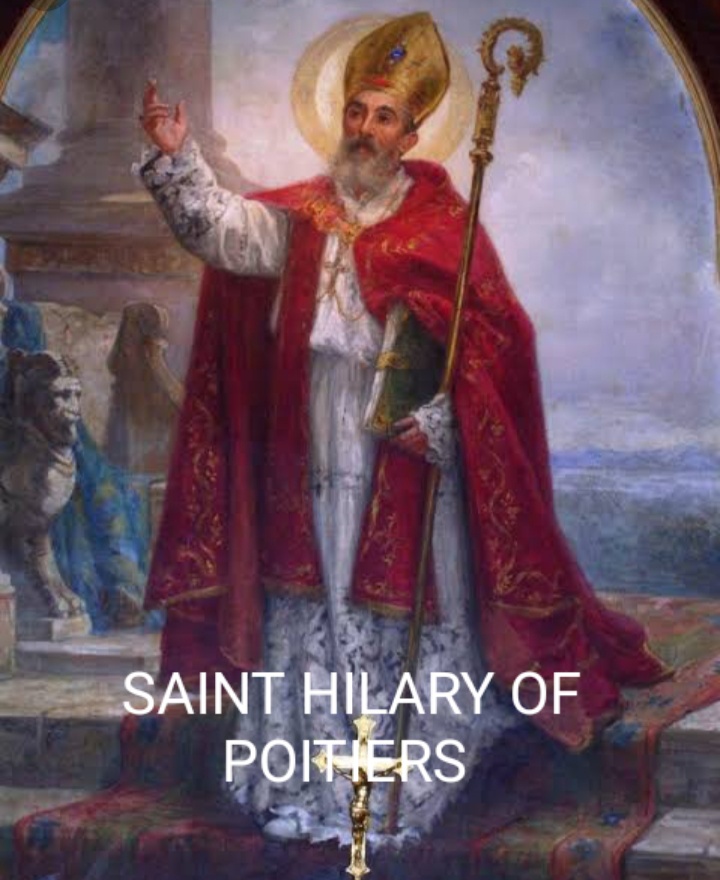 Hilary spent nearly four years in exile, although the reasons for this banishment remain obscure. The traditional explanation is that Hilary was exiled for refusing to subscribe to the condemnation of Athanasius and the Nicene faith. More recently, several scholars have suggested that political opposition to Constantius and support of the usurper Silvanus may have led to Hilary’s exile.

While in Phrygia, he wrote De trinitate (The Trinity), the first work in Latin to deal with the issues of the Trinitarian controversies. In De synodis (“Concerning the Synods”) he explained the history of the Arian controversy and directed the faithful in the East to rally against those who believed the Son was unlike the Father. His appeals to Constantius were unsuccessful, and he was expelled from the East. Returning to Poitiers, he spent his last years combatting Arianism in Gaul and writing his commentary on the Psalms and Tractatus mysteriorum on typology.

His reaffirmation of orthodoxy, almost alone in Gaul, earned him the title of the Athanasius of the West. Probably the earliest hymnist, he composed a book of lyrics (c. 360). On returning to his diocese in 361, Hilary spent most of the first two or three years trying to persuade the local clergy that the homoion confession was merely a cover for traditional Arian subordinationism. Thus, a number of synods in Gaul condemned the creed promulgated at Council of Ariminium in 359. 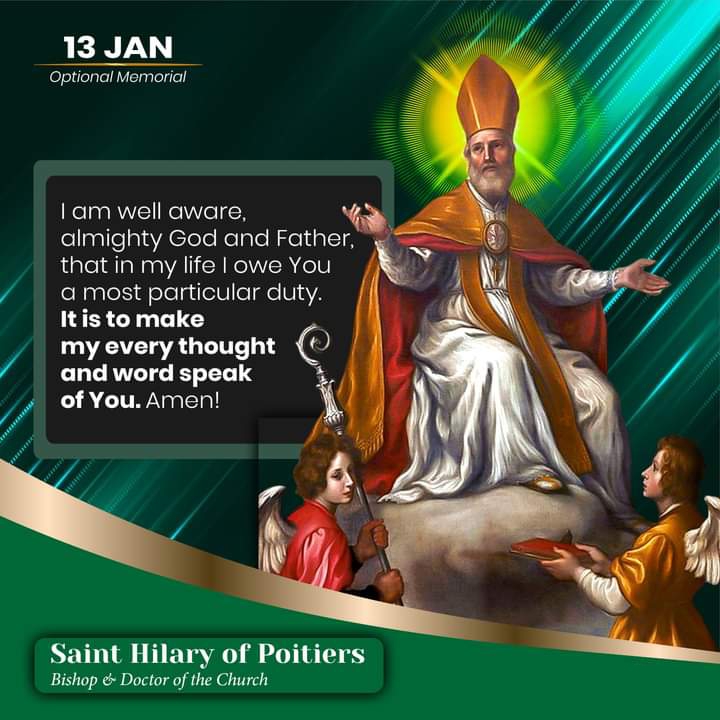 In about 360 or 361, with Hilary’s encouragement, Martin, the future bishop of Tours, founded a monastery at Ligugé in his diocese. In 364, Hilary extended his efforts once more beyond Gaul. He impeached Auxentius, bishop of Milan, a man high in the imperial favour, as heterodox. Emperor Valentinian I accordingly summoned Hilary to Milan to there maintain his charges. However, the supposed heretic gave satisfactory answers to all the questions proposed. Hilary denounced Auxentius as a hypocrite as he himself was ignominiously expelled from Milan.

Upon returning home, Hilary in 365, published the Contra Arianos vel Auxentium Mediolanensem liber, describing his unsuccessful efforts against Auxentius. He also (but perhaps at a somewhat earlier date) published the Contra Constantium Augustum liber, accusing the lately deceased emperor as having been the Antichrist, a rebel against God, “a tyrant whose sole object had been to make a gift to the devil of that world for which Christ had suffered”. According to Jerome, Hilary died in Poitiers in 367.

In the Roman calendar of saints, Hilary’s feast day is on 13 January, 14 January in the pre-1970 form of the calendar. The spring terms of the English and Irish Law Courts and Oxford and Dublin Universities are called the Hilary term since they begin on approximately this date. Some consider Saint Hilary of Poitiers the patron saint of lawyers. He was declared a doctor of the church in 1851 by Pope Pius IX. Hilary is remembered in the Anglican Communion with a Lesser Festival on 13 January.

God our Father, your call of St. Hilary to the faith, through reading and study, gave him revelation and love of the truths of the Catholic faith. His love was displayed by him in his willingness to suffer for that truth.

Help us to know, love, and serve you by knowing, loving, and serving the instrument of your truth on earth—the Catholic Church. Help us to reveal this truth to others, through our evangelical ministry, through Jesus our Lord. Amen 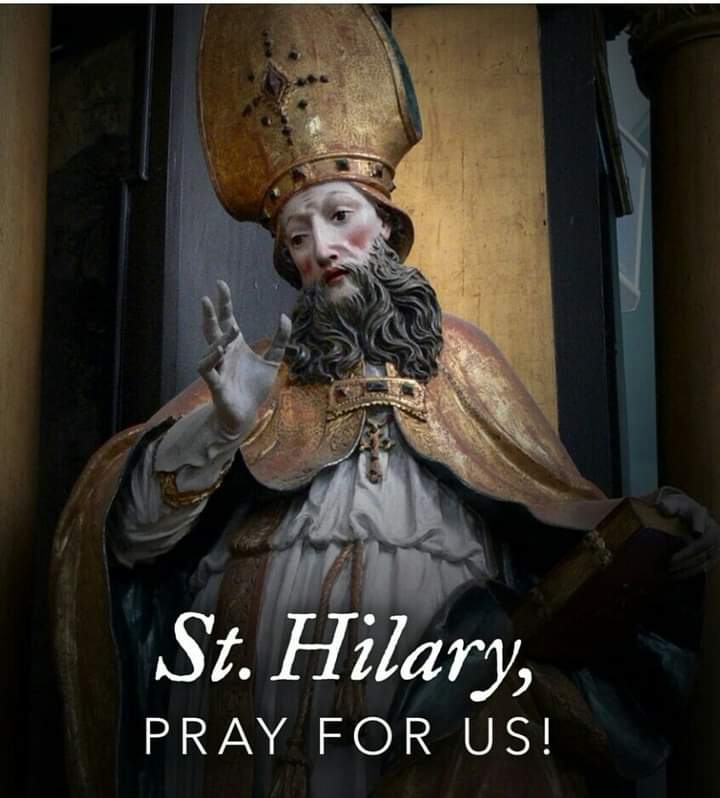 Saint Hilary of Poitiers, pray for us.