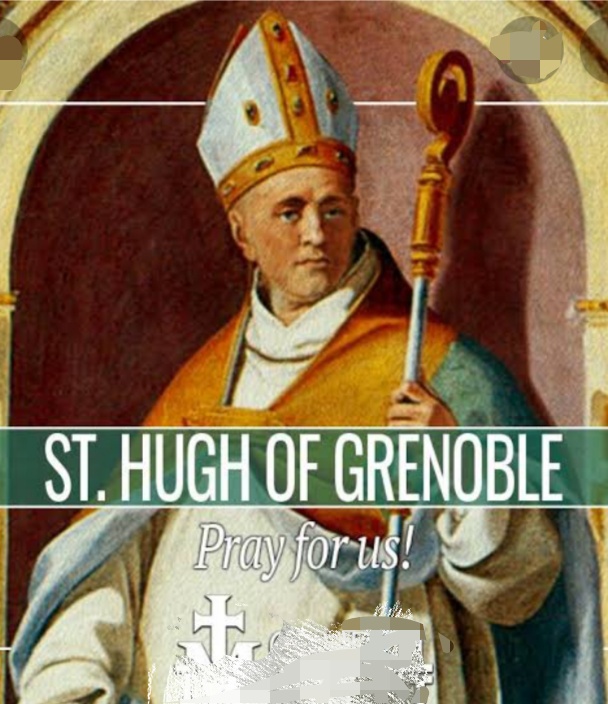 Hugh of Châteauneuf (French: Hugues de Châteauneuf, 1053 – 1 April 1132), also called Hugh of Grenoble, was the Bishop of Grenoble from 1080 to his death. A partisan of the Gregorian reform, he was opposed to the Archbishop of Vienne, who later became Pope Callixtus II. Hugh was born at Châteauneuf-sur-Isère, County of Albon, and showed piety and theological facility from a young age. 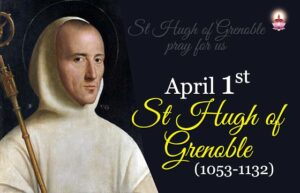 While still a layman, Hugh was made a canon of Valence. His piety was such that it was said of him that he only knew one woman by sight. Hugh had received, from his cradle, strong impressions of piety through the example and solicitude of his illustrious and holy parents. His father, Odilo, who served in an honorable post in the army, labored by all means in his power to make his soldiers faithful servants of their Creator, and by severe punishments, to restrain vice.

By the advice of his son, Saint Hugh, in his later years he became a Carthusian monk, and died at the age of one hundred, having received Extreme Unction and Viaticum from the hands of his son. Under his direction, his mother had served God in her own house for many years by prayer, fasting, and abundant almsgiving; and Saint Hugh also assisted her in her last hours.

Hugh, from the cradle, was a child of benediction; he was recognized as such through his exceptional success in his studies. Having chosen to serve God in the ecclesiastical state, he accepted a canonry in the cathedral of Valence. His sanctity and learning rendered him an ornament of that church, and at age twenty-seven he was chosen to be the Bishop of Grenoble. At the Council of Avignon in 1080, he was elected bishop, though he was not yet ordained. 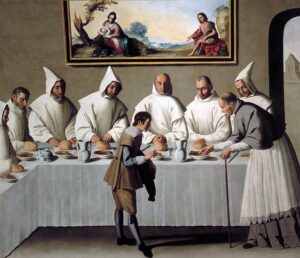 His forceful preaching moved crowds and touched hearts; in the confessional he wept with his penitents, and aroused in them a deeper contrition. Pope Gregory VII consecrated him in Rome, and inspired in him an ardent zeal for the Church’s liberty and the sanctification of the clergy.The See of Grenoble had fallen into a very poor state and Hugh was selected to be its Gregorian renovator. Conducted by a papal legate to Rome, Hugh was ordained by Pope Gregory VII himself.

He at once undertook to reprove vice and reform abuses, at that time rampant in his diocese, but found his efforts without fruit. When he had succeeded in countering abuse and fostering devotion after two years, he tried to resign his bishopric and enter the Benedictine monastery at Cluny. However, the Pope ordered him to continue his episcopal work. Pope Gregory commanded him, in the name of holy obedience, to resume his pastoral charge, saying: “Go to your flock; they need you.” This time his sanctity effected great good in souls.

After a few years the face of his diocese had changed. His charity for the poor led him to sell even his episcopal ring and his chalice to assist them. During his episcopate the young Saint Bruno came to him for counsel, and it was Saint Hugh who assisted him in the foundation of the Carthusian Monastery in the mountains of the diocese of Grenoble, whose renown after a thousand years has not diminished.

Always filled with a profound sense of his own unworthiness, he earnestly solicited three Popes for leave to resign his bishopric, that he might die in solitude, but was never able to obtain his request. For the rest of the 11th century, his episcopate was marked by strife with Count Guigues III of Albon over the possession of ecclesiastic lands in the Grésivaudan, a valley in the French Alps. Hugh alleged that the Count had usurped the lands from the bishopric of Grenoble with the help of Bishop Mallen of Grenoble. 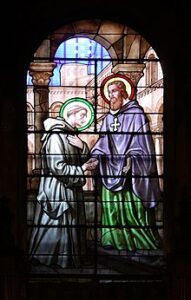 An accord was finally reached between Hugh and Count Guigues only in 1099. The Count agreed to cede the disputed territories while Hugh admitted to the Count’s temporal authority within the vicinity of Grenoble. It was then that Hugh became instrumental in founding the Carthusian Order. He received Bruno of Cologne, perhaps his own teacher, and six of his companions in 1084, after seeing them under a banner of seven stars in a dream.

Hugh installed the seven in a snowy and rocky Alpine location called Chartreuse. They founded a monastery and devoted their lives to prayer and study, being often visited by Hugh, who was reported to have adopted much of their way of life. Hugh also founded the nearby Monastère de Chalais, which grew into an independent order. God was pleased to purify his soul by a lingering illness before He called him to Himself.

He closed his penitential course on the 1st of April in 1132, two months before completing his eightieth year. Miracles attested the sanctity of his death, and he was canonized on 22 April 1134, only two years afterwards, by Pope Innocent II. His patronage is against headache and for Grenoble, France. His feast day is on 1 April in the Catholic Church. During the French Wars of religion, the Huguenots burned his body. Sant’Ugo, a Roman titular church, was dedicated to him in 1991. He also gives his name to a church in Greenbelt, Maryland, US. 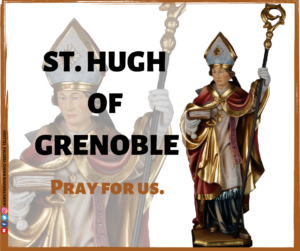 O Heavenly Patron, Saint Hugh, in whose name I glory, pray ever to Christ for me. Strengthen me in my faith; establish me in virtue; guard me in the conflict; that I may vanquish the malignant foe and attain to glory everlasting. Amen