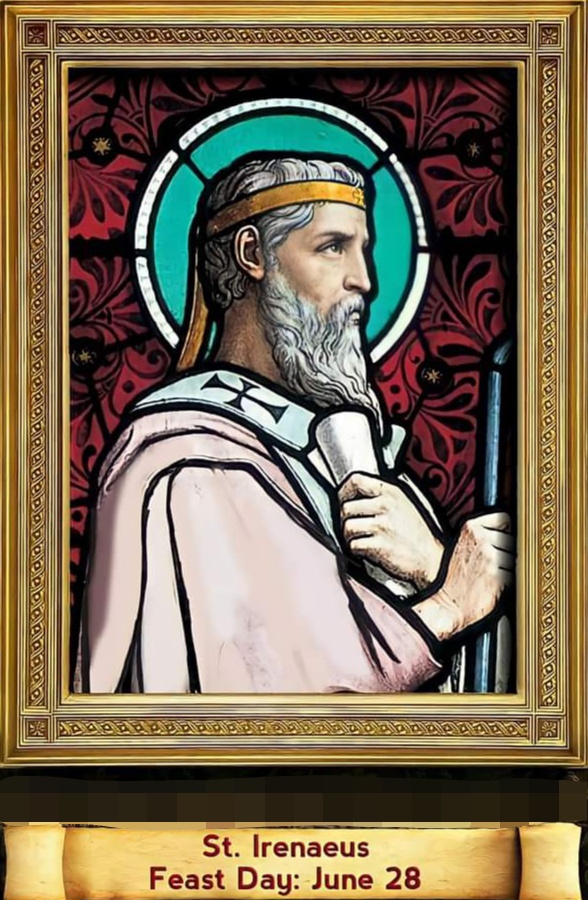 Irenaeus (c. 130 – c. 202 AD) was a Greek bishop noted for his role in guiding and expanding Christian communities in the southern regions of present-day France and, more widely, for the development of Christian theology by combating heresy and defining orthodoxy. Originating from Smyrna, he had seen and heard the preaching of Polycarp, who in turn was said to have heard John the Evangelist, and thus was the last-known living connection with the Apostles.

The chieftains of the three regions of Roman Gaul (France), which is divided into three parts, met yearly in the southern city of Lugdunum, known today as Lyon. These rough noblemen and their large retinues trekked to Lyon in 12 B.C. for the dedication of the Sanctuary of the Three Gauls on the slope of Lyon’s hill of the Croix Rousse.

The inauguration ceremony was an elaborate reinforcement of Rome’s military, religious, and commercial dominance. Pagan priests performed pagan rites on pagan altars to pagan gods, asking them to favor the new sanctuary, the tribes present, and the city. This important sanctuary remained a focal point of Lyon’s civic and religious life for centuries. And in the sand and dirt of this Sanctuary of the Three Gauls, in 177 A.D., the blood of the first Christian martyrs of Gaul was spilled.

Here they were abused, tortured, and executed. Killed for their faith were about fifty Christians, including the Bishop of Lyon, Pothinus, and a slave woman named Blandine. While they were imprisoned and awaiting their fate, these future martyrs wrote a letter to the Pope and gave it to a priest of Lyon to carry to Rome. That priest was today’s saint, Irenaeus.

During the persecution of Christians by Marcus Aurelius, the Roman emperor from 161 to 180, Irenaeus was a priest of the Church of Lyon. The clergy of that city, many of whom were suffering imprisonment for the faith, sent him in 177 to Rome with a letter to Pope Eleutherius concerning the heresy of Montanism, and that occasion bore emphatic testimony to his merits. While Irenaeus was in Rome, a persecution took place in Lyon. Returning to Gaul, Irenaeus succeeded the martyr Saint Pothinus becoming the second bishop of Lyon.

During the religious peace which followed the persecution by Marcus Aurelius, the new bishop divided his activities between the duties of a pastor and of a missionary (as to which we have but brief data, late and not very certain). Almost all his writings were directed against Gnosticism. The most famous of these writings is Adversus haereses (Against Heresies). Irenaeus alludes to coming across Gnostic writings, and holding conversations with Gnostics, and this may have taken place in Asia Minor or in Rome.

However, it also appears that Gnosticism was present near Lyon: he writes that there were followers of ‘Marcus the Magician’ living and teaching in the Rhone valley. Little is known about the career of Irenaeus after he became bishop. The last action reported of him (by Eusebius, 150 years later) is that in 190 or 191, he exerted influence on Pope Victor I not to excommunicate the Christian communities of Asia Minor which persevered in the practice of the Quartodeciman celebration of Easter.

Nothing is known of the date of his death, which must have occurred at the end of the second or the beginning of the third century. He is regarded as a martyr by the Catholic Church and by some within the Orthodox Church. He was buried under the Church of Saint John in Lyon, which was later renamed St Irenaeus in his honour. The tomb and his remains were utterly destroyed in 1562 by the Huguenots.

When the dead bishop Pothinus’ mutilated remains were tossed into the river, Irenaeus was chosen as his replacement. He would remain the Bishop of Lyon until his death. It was in this way that the tragic end of some raised others to prominence. To counter the doctrines of the gnostic sects claiming secret wisdom, he offered three pillars of orthodoxy: the scriptures, the tradition handed down from the apostles, and the teaching of the apostles’ successors.

Intrinsic to his writing is that the surest source of Christian guidance is the Church of Rome, and he is the earliest surviving witness to regard all four of the now-canonical gospels as essential. He is recognized as a saint in the Catholic Church, which celebrates his feast on 28 June, and in the Eastern Orthodox Churches, which celebrates the feast on 23 August.

Irenaeus is remembered in the Church of England with a Lesser Festival on 28 June. Copies of Saint Irenaeus’ most important works survived through the ages, likely due to their fame and importance, and are now irreplaceable texts for understanding the mind of an early Church thinker on a number of matters.

Similar to those of Saint Justin Martyr, Irenaeus’ writings astonish in proving just how early the Church developed a fully Catholic theology. In keeping with other theologians of the patristic era, Irenaeus focused more on the mystery of the Incarnation, and Christ as the “New Adam,” than on a theology of the Cross. He also called Mary the “New Eve” whose obedience undoes Eve’s disobedience.

Irenaeus’ writings primarily critique Gnosticism, which held that Christianity’s truths were a form of secret knowledge confined to a select few. The only true knowledge is knowledge of Christ, Irenaeus argued, and this knowledge is accessible, public, and communicated by the broader Church, not secret societies.

Irenaeus fought schismatics and heretics, showing just how early the
connection between correct theology and Church unity was understood. His main work is even entitled “Against Heresies.” He promoted apostolic authority as the only true guide to the correct interpretation of Scripture and, in a classic statement of theology, Irenaeus explicitly cited the Bishop of Rome as the primary example of unbroken Church authority.

Like Saint Cyprian fifty years after him, Irenaeus described the Church as the mother of all Christians: “…one must cling to the Church, be brought up within her womb and feed there on the Lord’s Scripture.” This theology notes a beautiful paradox. While in the physical order a child leaves his mother’s womb and grows ever more apart from her as he matures, the Church’s motherhood exercises an opposite pull on her children.

Once she gives us new life through baptism, our bonds with Mother Church grow ever stronger and tighter as we mature. We become more dependent on her sacraments, more intimate with her life and knowledge, as we grow into adulthood. The Church becomes more our mother, not less, as we age.

On Pope Saint John Paul II’s third pastoral visit to France, in October 1986, his very first stop was the Sanctuary of the Three Gauls in Lyon. Excavated and opened to the public in the mid-twentieth century, it rests largely unknown, a ruin, in a residential neighborhood. Before dignitaries and a large crowd, the Pope prostrated himself and kissed the site where the many martyrs of Lyon died so many centuries before.

Saint Irenaeus may have been looking on from the stone benches that fateful day in 177 A.D. when his co-religionists were murdered. The blood of those forgotten martyrs watered the seed that later flowered into the great saint we commemorate today. Saint Irenaeus is Patron Saint of apologists and catechists.

Saint Irenaeus, please intercede for us that God strengthen our wills, enlighten our minds, and deepen our trust. Like you, we pray that our endeavor will be to belong toour Father in faithfulness and righteousness.

May we be loyal sons and daughters of God, and loyal, educated, and faithful members of His Church. Help us to fulfill our loftiest and our most noble goals. Saint Irenaeus, pray for us. 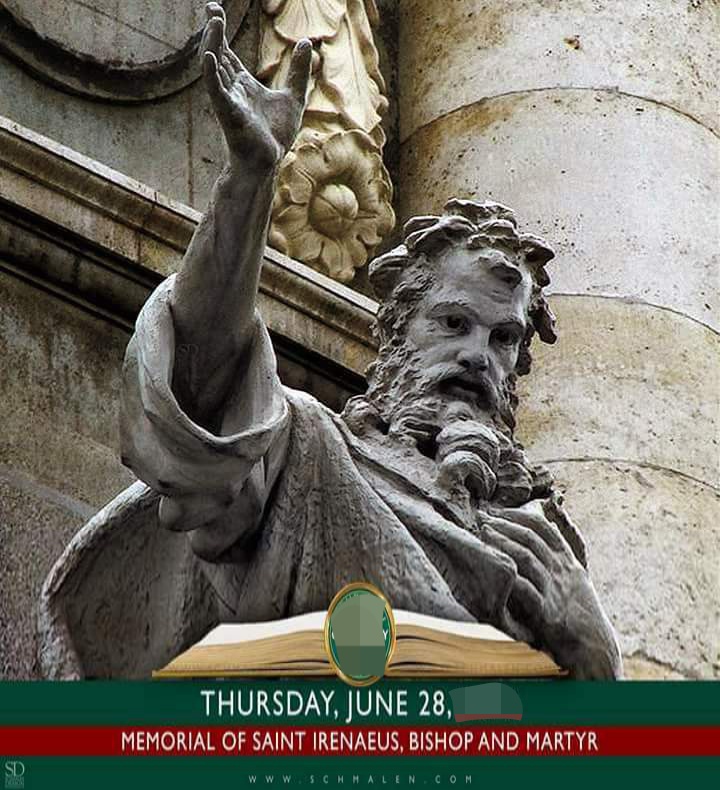