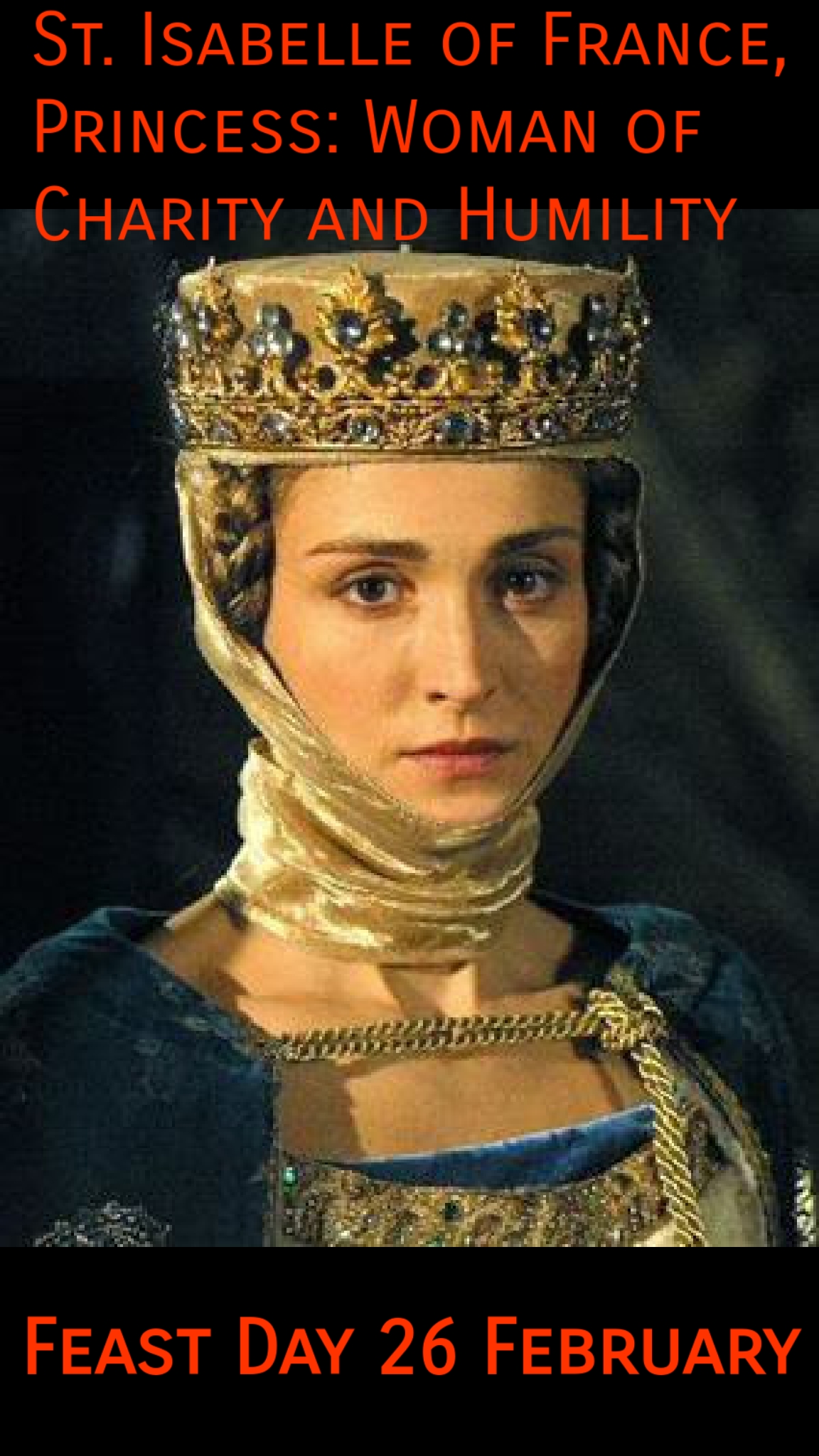 Saint Isabelle of France, (March 1225 – 23 February, 1270), was the daughter of King Louis VIII of France. Remembered for extreme devotion to the Lord, even as a child, Saint Isabelle requested spiritual direction and permanent confessors from Pope Innocent IV, who allowed her to retain some local Franciscans for that post. As she matured, she became even more devoted to the Lord, through the direction of the Franciscans, eventually breaking off several engagements (arranged for political reasons by her brother who had assumed the throne), and refusing to marry so as to remain a consecrated virgin for the Lord.

Isabelle resided in the royal castle for much of her young adult life, but lived a cloistered life, similar to that of a religious. She refused the lavish appointments and meals offered to her, instead subsisting on meager rations, and donating what she saved to the poor. Her days were spent in service to those in need, specifically the sick and the destitute. Of weak constitution, Isabelle was often ill, specifically with stomach ailments, a condition made worse by her fasting and mortification.

She loved learning, and went so far as to study Latin so that she could pray the liturgy of the hours and read the Church fathers. Once, the pope wrote to her directly to encourage her to marry the king of Jerusalem for the good of Christendom, but her refusal to him was humble and wise and he acknowledged her desire to dedicate her life to God.

Every day, before she ate her dinner, Isabel would seat poor people at her table and serve them herself. She would spend the evening visiting others who were sick and poor. Following the king’s return from the Crusades, where he had been imprisoned for some time, Isabelle left the castle, as she was called to found a Franciscan Order for women – the Convent of the Humility of the Blessed Virgin – in Longchamp, France.

The sisters of the order spent their days in charity, but as the name of the order suggests, never accepted recognition or reward for their labors, but continued glorifying the Lord. The mission of the Franciscan Order was to serve the poor in love. Saint Isabelle was appointed Abbess upon recognition and approval of the Order, but refused, preferring to live near the monastery, and to oversee  the operations from her home, and also re-writing the rules governing the work of the sisters.

Displeased with the first rule of the order, which was modified from the Rules of the Order of Poor Clares, Isabelle sought to make the direction of her sisters more strict, eventually succeeding in gaining approval.
Isabelle continued to suffer from constant illness, but also, through the grace of God, received mystical graces and experienced numerous ecstasies.

During one of these ecstatic visions, she foretold the day and hour she would pass away, which delighted her greatly, as she was eager to return to her Lord. Following her death, she was buried in her habit, and laid to rest in the convent she had founded. Her body was exhumed twice, and was both times found to be incorrupt.

The life of Saint Isabelle suggests to us that our human weaknesses, even those of the body, can be overcome by the grace of God. Isabelle, despite pressure to do otherwise for personal and political gain, resisted the pressure of the Courts of France to marry, remaining a virgin, and consecrating herself to God. She sought out the spiritual direction she needed, listened for the call of the Lord, and followed it without question.

Despite sickness and discomfort throughout her life, she found the strength to serve the Lord and those around her. So eager to rejoin her Maker, she was rewarded with knowledge of when that would happen, which she awaited with joy. Saint Isabelle of France inspires us to examine our lives, identifying those small barriers we hide behind, rather than serving God.

Whether it be work, sickness, fatigue, or financial security, we all have many reasons—many excuses—to focus on ourselves, rather than on the Lord, and through Him, on those in need around us. This is a perfect opportunity to broaden our view from ourselves to others, breaking down our barriers, and embracing the Lord in those we serve. She is Patroness of the Sick.

Father of peace and love, you gave Saint Isabelle the gift of reconciling enemies. By the help of her prayers give us the courage to work for peace among all, that we may be called children of God.

We ask this through our Lord Jesus Christ, your Son, Who lives and reigns
with you and the Holy Spirit, one God, forever and ever. Amen 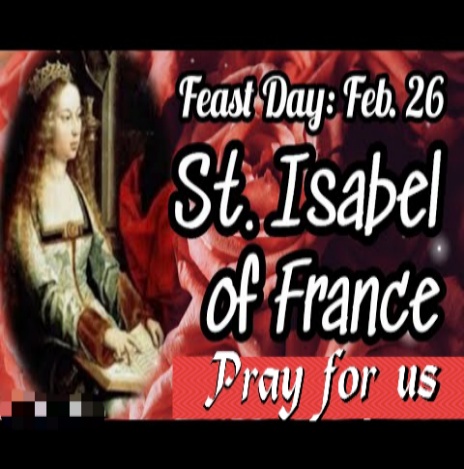 St. Isabelle of France, pray for us!