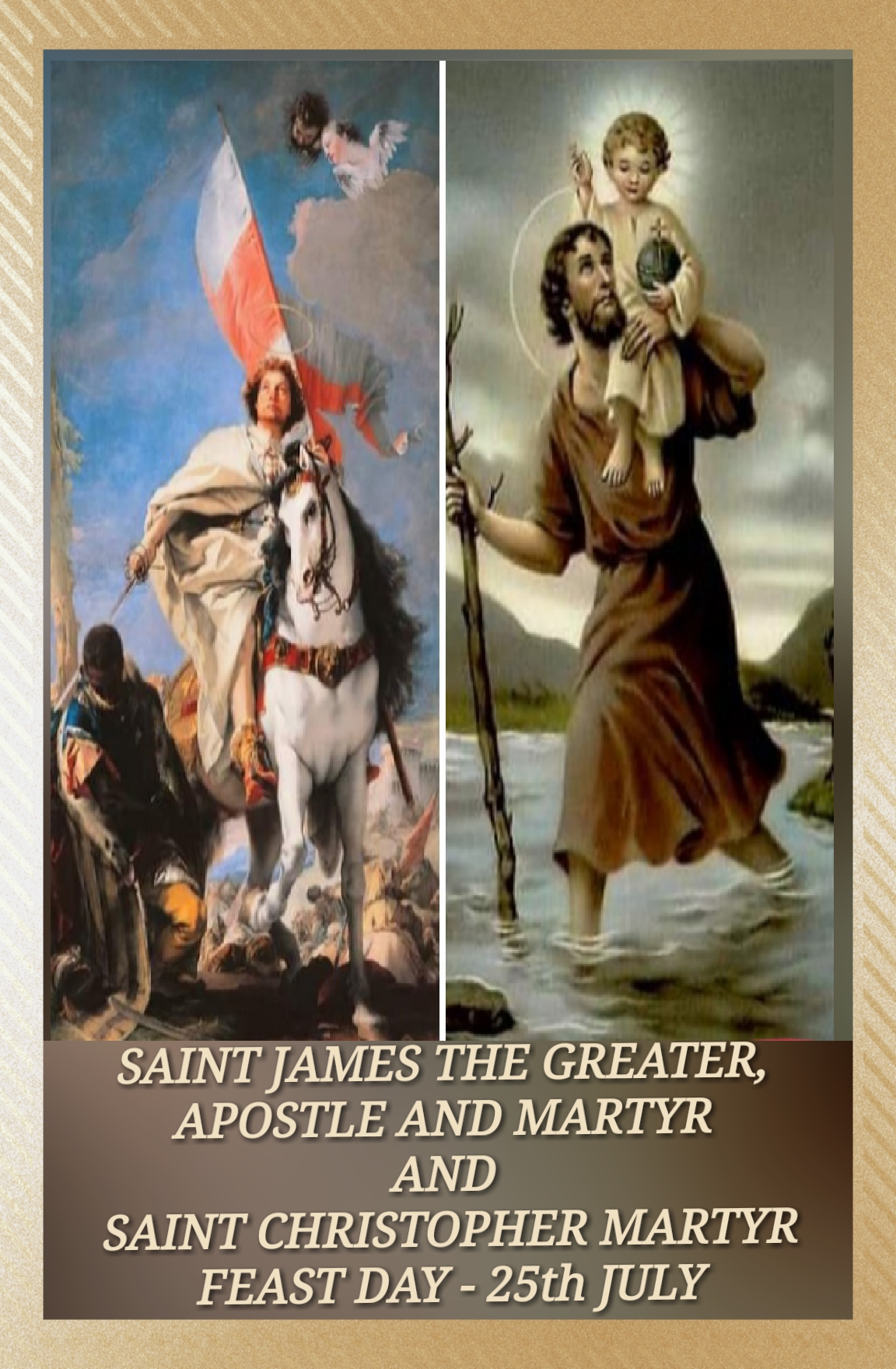 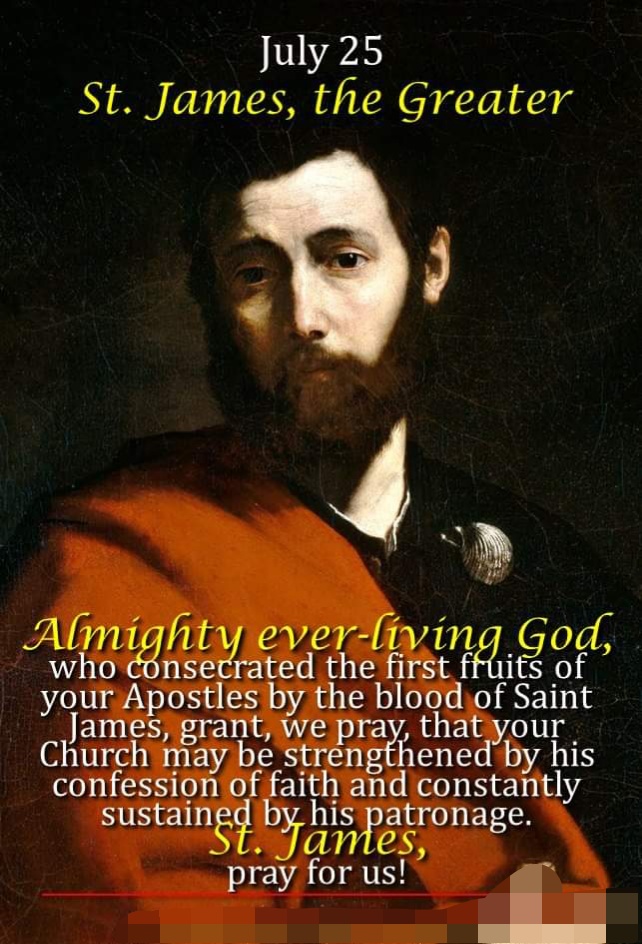 In Spain, he is called El Senor Santiago, the patron saint of horsemen and soldiers, and his great shrine at Santiago de Compostela in that country has been a place of pilgrimage for centuries. He is one of those that Jesus called Boanerges, “son of thunder,” the brother of John the Evangelist and the son of Zebedee the fisherman from Galilee.

St. James the Greater and his brother John were apparently partners with those other two brothers, Peter and Andrew, and lived in Bethsaida, on the north shore of the Sea of Galilee. How and where James first met Jesus, we do not know; but there is an old legend that makes Salome, his mother, a sister of Mary, and if this were the case, he would have known Jesus from childhood. 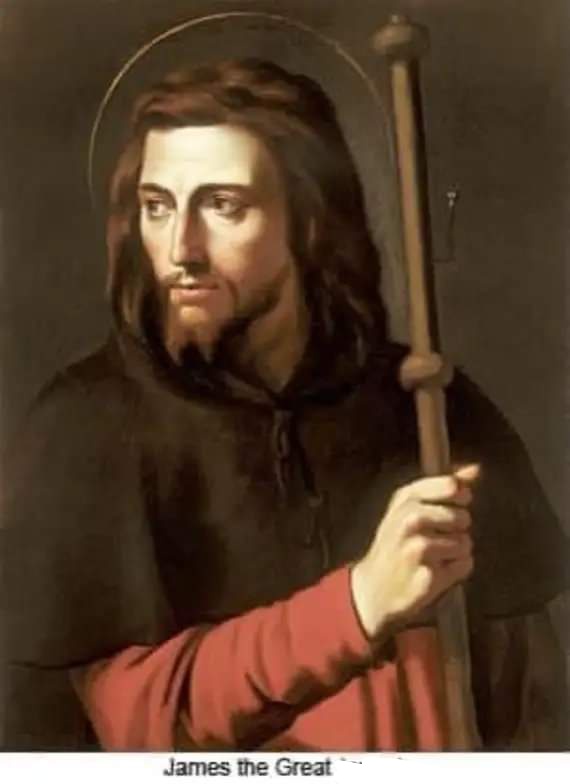 Along with Peter and his brother John, James was part of the inner circle of Jesus, who witnessed the Transfiguration, were witnesses to certain of His miracles, like the raising of the daughter of Jairus, and accompanied Him to the Garden of Gethsemani. Like his brother, he was active in the work of evangelization after the death of Jesus, and one legend, even has him going to Spain after Jesus’ resurrection.

His prominence and his presence in Jerusalem must have been well known, for scarcely a dozen years after the Resurrection, he became involved in the political maneuverings of the day and was arrested and executed by King Herod Agrippa. This was followed by the arrest of Peter also, so his death must have been part of a purge of Christian leaders by Agrippa, who saw the new Christian movement as a threat to Judaism. 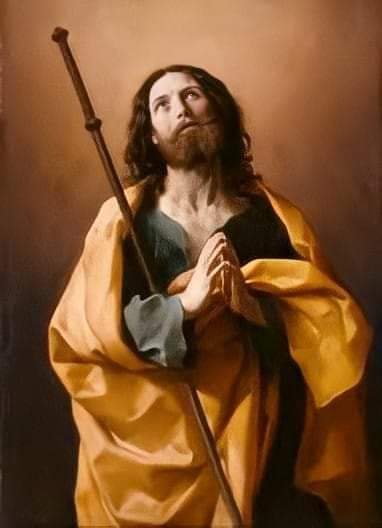 Jesus had foretold this kind of fate when He prophesied that James and his brother John would “drink of the same chalice” of suffering as Himself. The two brothers had asked to be seated at the right of Jesus and at His left in His kingdom, and Jesus told them that they would be with Him in a far different way than they expected. James’ death is the only biblical record we have of the death of one of the Apostles, and he was the first of that chosen band to give his life for his Master. 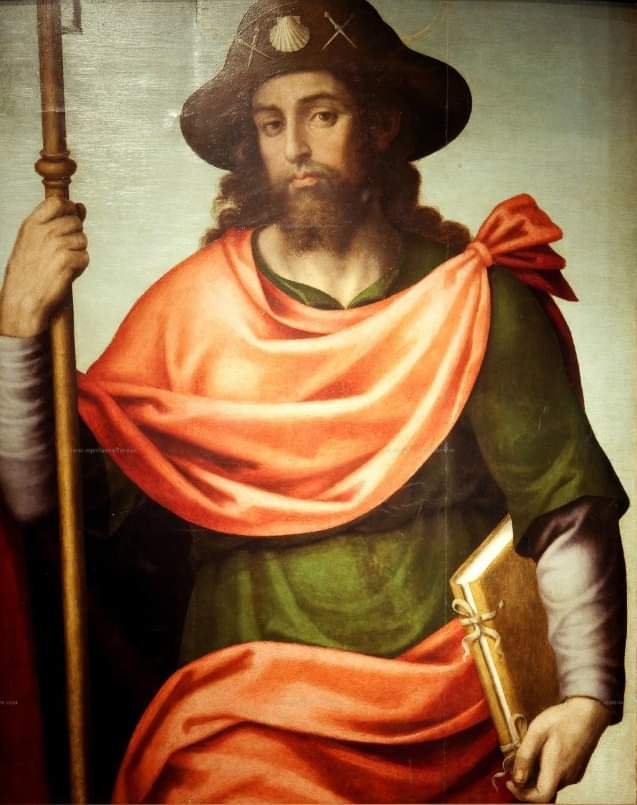 The traditional pilgrimage to the grave of the saint, known as the “Way of St. James”, has been the most popular pilgrimage for Western European Catholics from the Early Middle Ages onwards, although its modern revival and popularity stem from Walter Starkie’s 1957 book, The Road to Santiago. The Pilgrims of St. James.

The site of martyrdom is located within the Armenian Apostolic Cathedral of St. James in the Armenian Quarter of Jerusalem. The Chapel of St. James the Great, located to the left of the sanctuary, is the traditional place where he was martyred, when King Agrippa ordered him to be beheaded (Acts 12:1–2). His head is buried under the altar, marked by a piece of red marble and surrounded by six votive lamps.

Almighty Ever-living God, Who consecrated the first fruits of your Apostles by the martyrdom of Saint James, grant, we pray, that your Church may be reinforced by his profession of faith and forever supported by his preservation and safe-keeping. 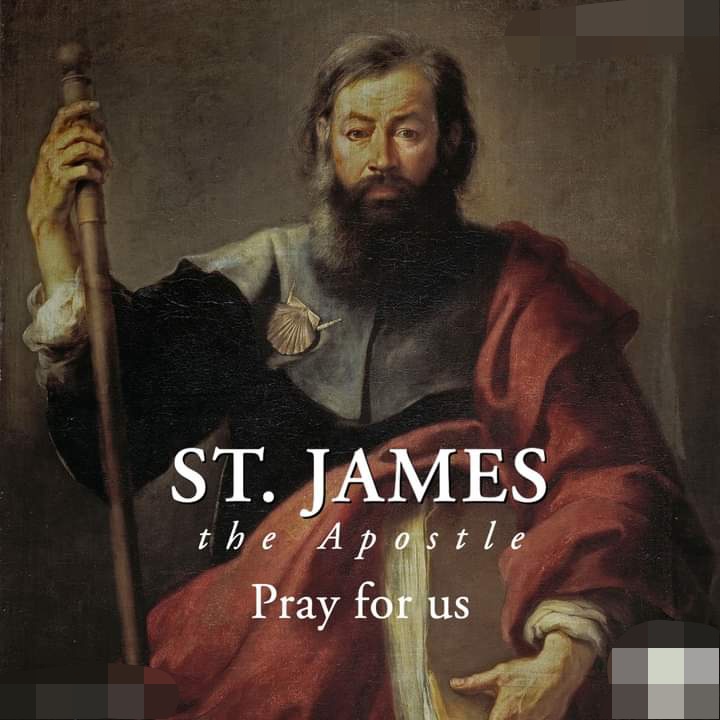 Saint James the Apostle, pray for us. 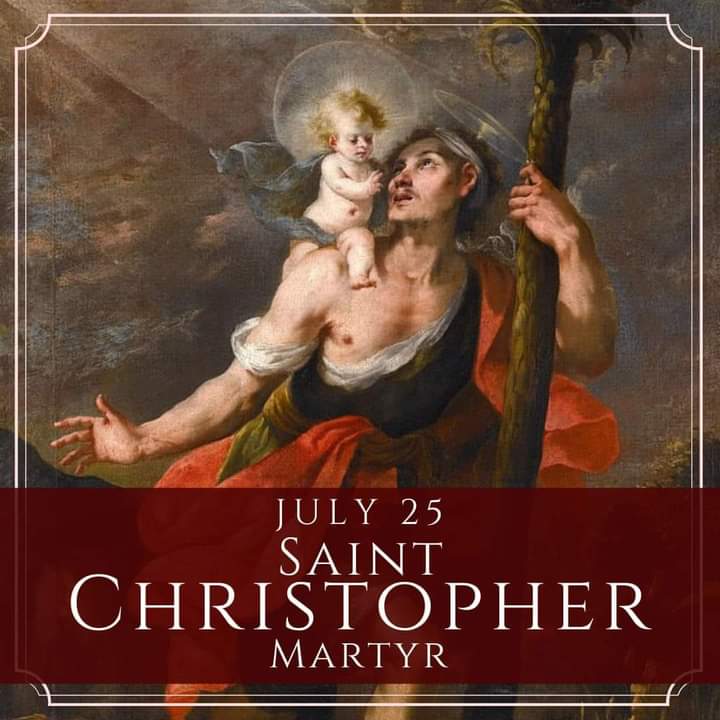 Saint Christopher is venerated by several Christian denominations as a martyr killed in the reign of the 3rd-century Roman emperor Decius (reigned 249–251) or alternatively under the emperor Maximinus Daia (reigned 308–313). There appears to be confusion due to the similarity in names “Decius” and “Daia”. Churches and monasteries were named after him by the 7th century.

The story of St. Christopher and the St. Christopher Medal is a captivating part of Christian gospel. He was a Canaanite 7.5 feet tall with a fearsome face. He is believed to be a large man of immense strength who lived in the third century during the reign of Decius.

According to legend, Christopher’s given name was Reprobus and he once served the king of Canaan, who he believed to be “the greatest king there was”. One day he saw that the king feared the devil. Upon learning this, he decided to depart from the king’s service and seek out the devil.

He came across one of whom declared himself as the devil and Reprobus decided to serve him. However, when he saw his new master avoid a wayside cross, he learned that the devil feared Christ. He left the devil’s service and set out on a journey to find Christ.

He encountered a hermit who instructed him on the Christian faith. The hermit told Reprobus that in order to serve Jesus, he recommends fasting and prayer. This option did not suit him very well. As an alternative, the hermit suggested that he might use his strength to help travelers cross a dangerous river. This was a service that suited him perfectly.

One day a child arrived to be carried across the river. Reprobus took the child upon his shoulders, but as he crossed the river, the child grew heavier until Reprobus feared he would fall and that they would both drown. When he asked the child why he was so heavy, the child revealed that he was Jesus Christ and answered that he was heavy with the weight of the world’s sins. 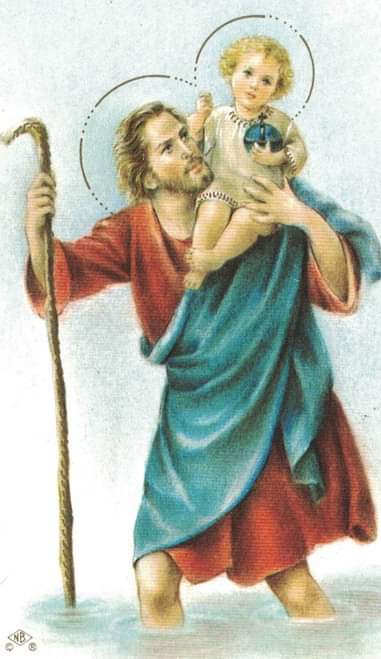 Not one to give up, he forged ahead with considerable difficulty and crossed the river with the Christ child on his shoulders. When they reached the opposite bank, Christ asked Reprobus to press his staff into the ground. When he did, the staff turned into a beautiful flowering tree, and he was rewarded.

Christ then baptized Reprobus in the river and gave him his Christian name which – Christopher – means “Christ-bearer.” The St. Christopher medal depicts a bearded, middle-aged man. Upon his shoulders sit a child representing Christ, and in his hand is a staff. The inscription “Svts. Christophorvs Protector Noster,” which means “Saint Christopher Our Protector” circles the medallion.

Christopher spent the remainder of his life in the service of Christ and worked tirelessly to spread Christ’s teachings. He died a martyr in Lycia, in 251 A.D. He is Patron of bachelors, transportation, traveling, storms, epilepsy, gardeners, holy death, and toothache and small images of him are often worn around the neck, on a bracelet, carried in a pocket, or in vehicles by Christians.

Probably the most important source of the historicity of Christophorus is a stone inscription published by Louis Duchesne in 1878. The copy of the stone inscription and the first publication took place on 7 April 1877 by Matthieu Paranikas in the Anatolia magazine in Constantinople. The stone of the size of 2 x 1 m was found in the ruins of a church in the ancient Chalcedon. 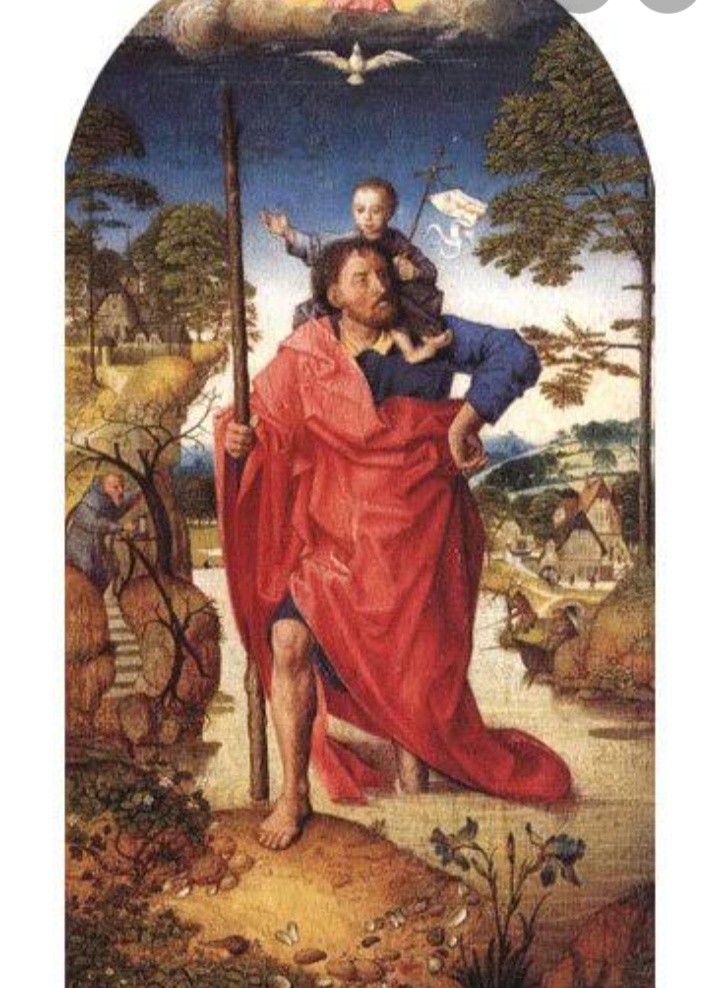 The construction of this Christophorus church dates back exactly to the time of the 4th Ecumenical Council, the Council of Chalcedon. The inscription also mentions the names of the state ministers of the Byzantine Empire and those church ministers who were involved in the laying of the foundation stone, the construction or the consecration of the church.

This inscription attests to the veneration of Christophorus in the 5th century in Chalcedony and, consequently, the existence of Christophorus, who probably in the period of the Great Persecution in the 4th century suffered the martyrdom.

Then for the year 553 a bishop of Arkadiopolis in Lydia is testified, who had taken the name Christophorus. A nunnery in Galatia was consecrated to Saint Christopher around the year 600. The Roman Martyrology remembers him on 25 July. The Tridentine Calendar commemorated him on the same day only in private Masses. 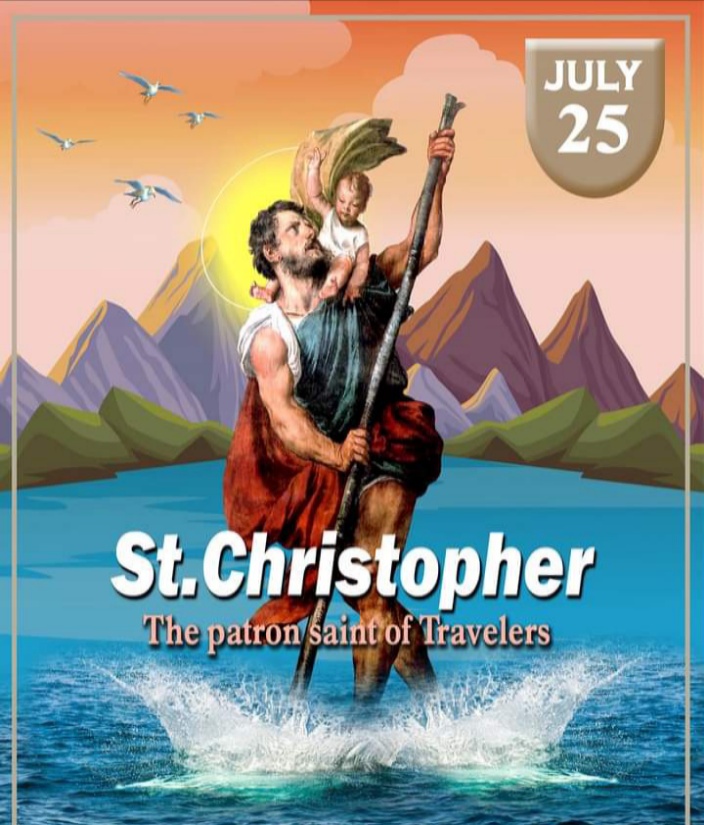 By 1954 his commemoration had been extended to all Masses, but it was dropped in 1970 as part of the general reorganization of the calendar of the Roman rite as mandated by the motu proprio, Mysterii Paschalis. Because he is not officially recognized by the Church, he has no date of beatification or canonization.

Grant me, O Lord, a steady hand and watchful eye. That no one shall be hurt as I pass by. You gave life, I pray no act of mine may take away or mar that gift of thine. Shelter those, dear Lord, who bear my company, from the evils of fire and all calamity. Teach me, to use my car for others need; Nor miss through love of undue speed the beauty of the world; that thus I may with joy and courtesy go on my way. St. Christopher, holy patron of travelers, protect me and lead me safely to my destiny. Amen 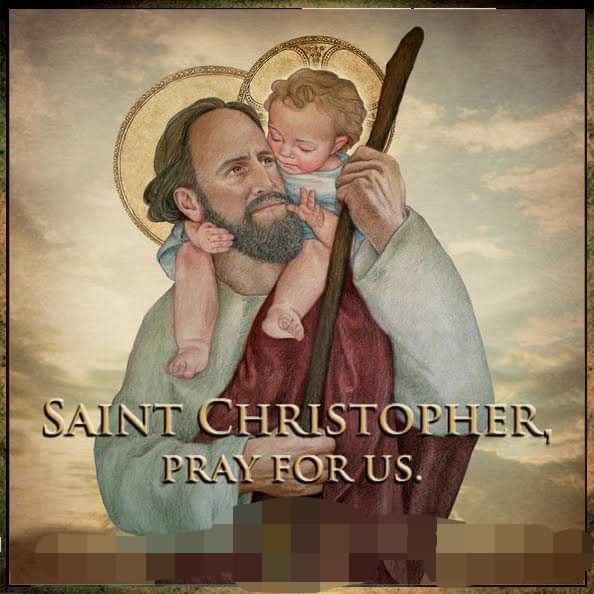 Saint Christopher, pray for us.