FEAST OF SAINT JOHN OF THE CROSS – 14th DECEMBER

FEAST OF ST. JOHN OF THE CROSS, PRIEST & DOCTOR OF THE CHURCH
FEAST DAY – 14 DECEMBER

John of the Cross (born 24 June 1542 – 14 December 1591), venerated as Saint John of the Cross, was a Spanish Catholic priest, mystic, and a Carmelite friar of converso origin. He is a major figure of the Counter-Reformation in Spain, and he is one of the thirty-six Doctors of the Church. John of the Cross is known for his writings. He was mentored by and corresponded with the older Carmelite, Teresa of Ávila. Both his poetry and his studies on the development of the soul are considered the summit of mystical Spanish literature and among the greatest works of all Spanish literature.

He was born Juan de Yepes y Álvarez at Fontiveros, Old Castile into a converso family (descendants of Jewish converts to Catholicism) in Fontiveros, near Ávila, a town of around 2,000 people. His father, Gonzalo, was an accountant to richer relatives who were silk merchants. In 1529 Gonzalo married John’s mother, Catalina, who was an orphan of a lower class. He was rejected by his family and forced to work with his wife as a weaver.

John’s father died in 1545, while John was still only around three years old. Two years later, John’s older brother, Luis, died, of malnourishment due to the poverty to which the family had been reduced. As a result, John’s mother Catalina took John and his surviving brother Francisco, first to Arévalo, in 1548 and then in 1551 to Medina del Campo, where she was able to find work.

In Medina, John entered a school for 160 poor children, mostly orphans, to receive a basic education, mainly in Christian doctrine. They were given some food, clothing and lodging. While studying there, he was chosen to serve as an altar boy at a monastery of Augustinian nuns. Growing up, John worked at a hospital and studied the humanities at a Jesuit school from 1559 to 1563. The Society of Jesus was at that time a new organisation, having been founded only a few years earlier by the Spaniard St. Ignatius of Loyola. In 1563 he entered the Carmelite Order, adopting the name John of St. Matthias.

The following year, in 1564 he made his First Profession as a Carmelite and travelled to Salamanca University, where he studied theology and philosophy. There he met Fray Luis de León who taught biblical studies (Exegesis, Hebrew and Aramaic) at the university. John became a Carmelite monk at Medina del Campo, Spain, in 1563 and was ordained priest in 1567. St. Teresa of Ávila, the celebrated mystic, enlisted his help (1568) in her restoration of Carmelite life to its original austerity.

A year later, at Duruelo, he opened the first Discalced Carmelite monastery. Reform, however, caused friction within the order and led to his imprisonment, first in 1576 and again in 1577 at Toledo, where he wrote some of his finest poetry. Escaping in August 1578, he later won high office in the order, becoming vicar provincial of Andalusia from 1585 to 1587. Near the end of his life, the Discalced Carmelites were again troubled by dissension, and he withdrew to absolute solitude.

John schematized the steps of mystical ascent—a self-communion that in quietude leads the individual from the inharmonious distractions of the world to the sublime peace of reunion between the soul and God. John’s schematization combines a poetic sensitivity for the nuances of mystical experience with a theological and philosophical precision guided by his study of St. Thomas Aquinas.

By virtue of which, he achieved preeminence in Spanish mystical literature, expressing the experience of the mystical union between the soul and Christ. In “Noche oscura,” perhaps his best-known work, he describes the process by which the soul sheds its attachment to everything and eventually passes through a personal experience of Christ’s Crucifixion to his glory.

Though John reached peaks of lyricism, he also presents the reader with considerable difficulties because his approach is rigorously intellectual. The same word may recur twice within four lines of a poem with a different symbolism on each occasion. He was canonized and declared doctor of the church by Pope Benedict XIII in 1726. In 1926 he was declared a Doctor of the Church by Pope Pius XI, and is commonly known as the “Mystical Doctor”.

Father, we like to take time, now and then, to thank You for some of the brilliant lights You caused to shine in this world. We are grateful to You, for the life of St. John of the Cross. We know of his suffering, his study of scripture, his preaching and writing, but most of all his prayer that has been an inspiration for so many people in his own time and through the centuries.

We thank You for him, because the warmth of his love is felt in our own lives. Just by reading the words of his burning heart, we are led to praise You more, to be more serious about our prayer, to long more ardently to be with You. Give us the gift of longing for the day when we shall be present totally with You, and in the company of all Your saints. Amen 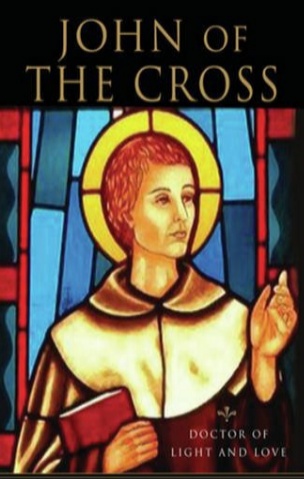