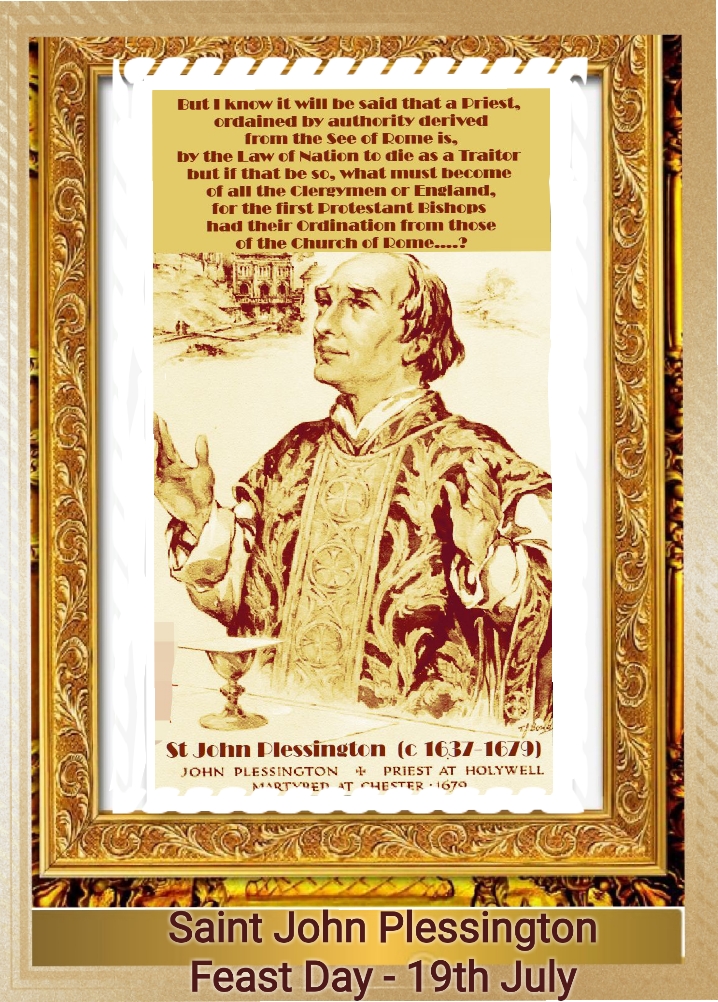 John Plessington (c. 1637 – 19 July 1679), also known as John Plesington, William Scarisbrick and William Pleasington, was an English Catholic priest who was executed by the English Crown for violating the ban on the presence of Catholic priests in the kingdom. He is now honored as one of the Roman Catholic Forty Martyrs of England and Wales.[1]

He was born at Dimples Hall, Garstang, Lancashire, the son of Robert Plessington, a Royalist Roman Catholic, and Alice Rawstone, a family thus persecuted for both their religious and political beliefs. He was educated by the Jesuits at Scarisbrick Hall, then at the Royal College of Saint Alban at Valladolid, Spain, and then at Saint Omer Seminary in France.

He was ordained in Segovia, Spain, on 25 March 1662. He returned to England in 1663 ministering to covert Catholics in the areas of Holywell and Cheshire, often hiding under the name John Scarisbrick. He was also tutor at Puddington Old Hall near Chester. In 1678 a fictitious conspiracy, known as the Popish Plot, was falsely alleged by Titus Oates. It claimed that there was an extensive Catholic plan to assassinate the King, Charles II.

This led to anti-Catholic hysteria and the execution of at least 22 men; St John Plessington was among them. Upon arrest in Chester during the Popish Plot scare caused by Titus Oates, he was imprisoned for two months, and then hanged, drawn and quartered for the crime of being a Catholic priest. From the scaffold at Gallow’s Hill in Boughton, Cheshire, he spoke the following:

But I know it will be said that a priest ordained by authority derived from the See of Rome is, by the Law of the Nation, to die as a Traitor, but if that be so what must become of all the Clergymen of the Church of England, for the first Protestant Bishops had their Ordination from those of the Church of Rome, or not at all, as appears by their own writers so that Ordination comes derivatively from those now living.

Plessington was beatified in 1929 by Pope Pius XI, and canonized and made one of the Forty Martyrs on 25 October 1970 by Pope Paul VI. There is a memorial tablet to him located in the entrance porch of St Werburgh’s Catholic Church, Grosvenor Park Road, Chester, just a short distance from where he was executed. In 1980 his name was added to the base of the granite obelisk nearby that was erected in 1898 for the Protestant martyr George Marsh in Boughton, which has the following inscription:

There is now a Catholic school called St. John Plessington in Wirral, England which won TES School of the Year 2010 out of England, Wales, Ireland and Scotland. In the early 21st century, a set of human bones found in an old trunk in Wales came to be regarded as possibly being Plessington’s remains. They had been found in the late 19th century, wrapped in 17th-century clothing, in a pub in Holywell, Flintshire.

This place had been known to be a secret gathering place for the Catholics of the region to worship covertly. This had been the region where he had carried out his ministry before his arrest. Showing signs of violence, the bones had been considered those of some anonymous martyrs of the period and entrusted to a community of the Society of Jesus in nearby Tremeirchion.

When a grave believed to have been Plessington’s was opened in 1962 as part of the process for his beatification, it was found to contain the remains of a younger man. Interest later focused on this set of remains. In 2015, Mark Davies, Roman Catholic Bishop of Shrewsbury, started a campaign to raise the funds for the testing of the DNA of the bones. His feast day is 19 July. 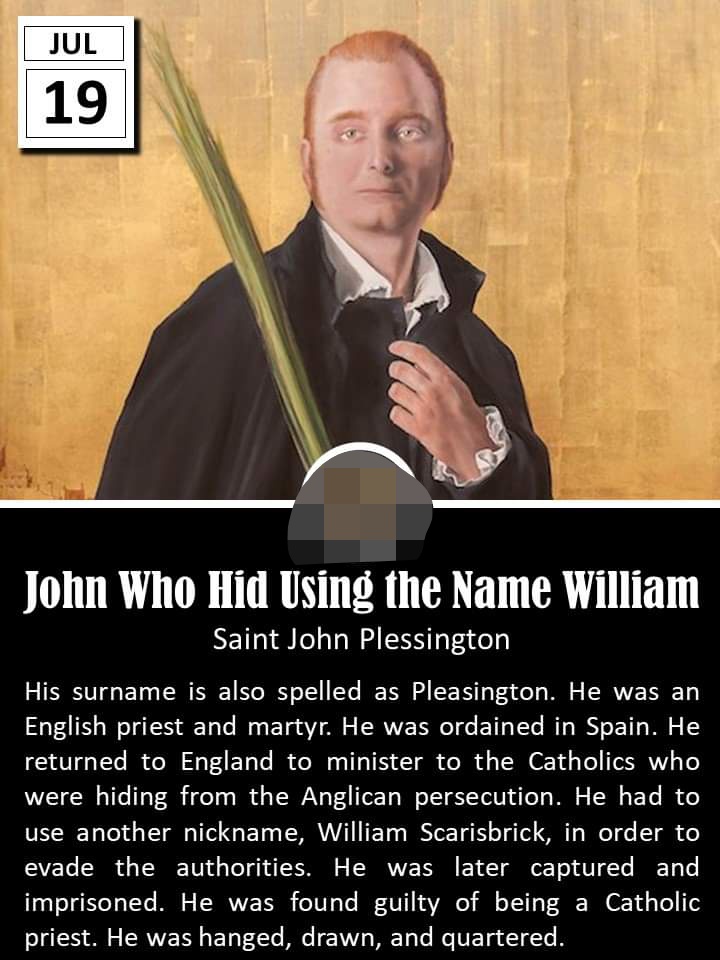 Saint John Plessington, you nurtured and thus saved the souls of many a Catholic, in the dangerous times of persecution, at the risk and cost of your own life, and will always be venerated as a martyr of the Faith.

Pray for us that we will love one another as Jesus loves us, regardless of culture or faith and profess our belief in Jesus the Lord. Amen